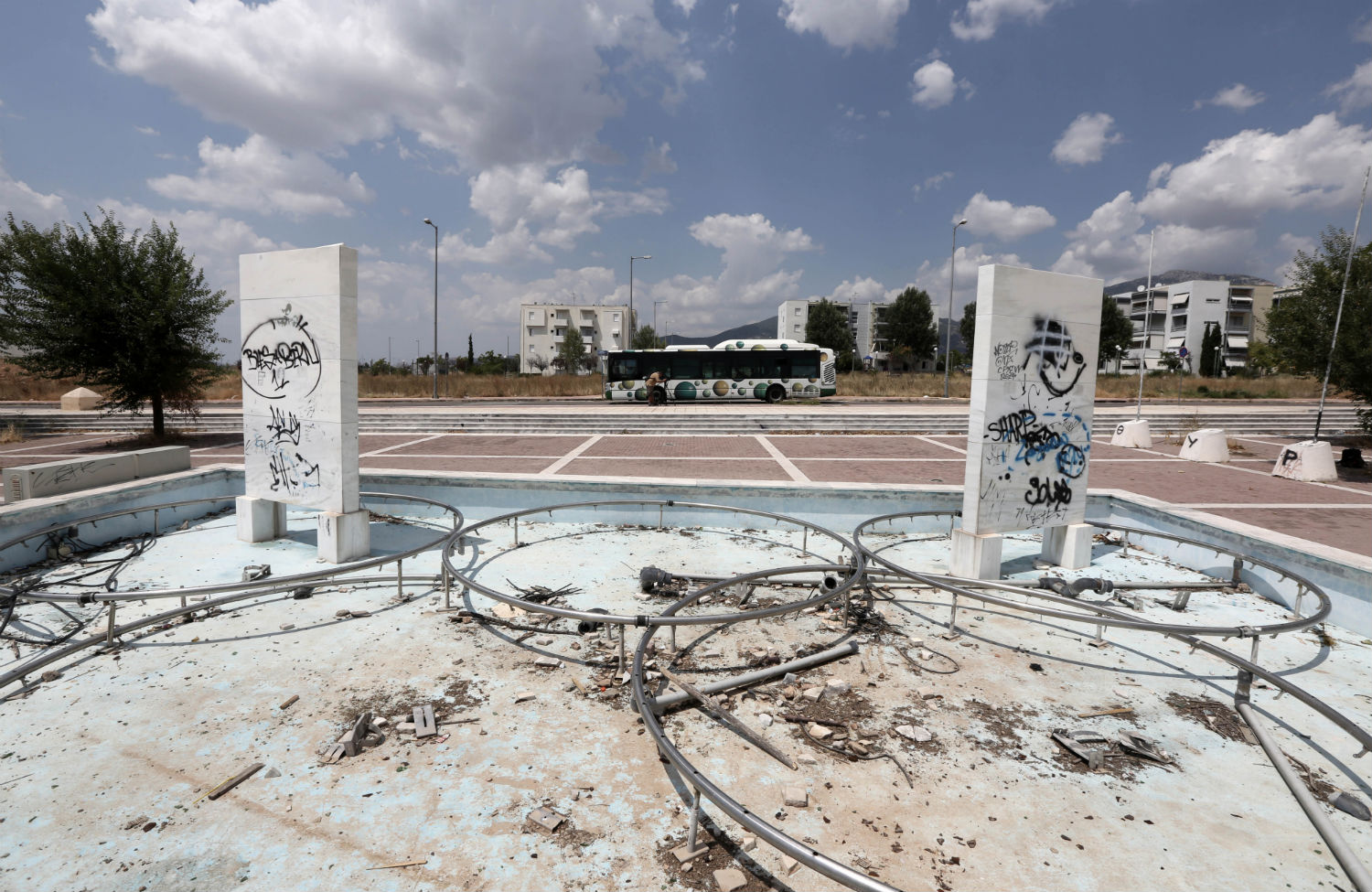 The remains of a fountain decorated with the Olympic rings at the Olympic village in northern Athens ten years after the games. (AP Photo/Thanassis Stavrakis)

Debt. Displacement. Militarization of public space. Gentrification on steroids. This describes what the Olympic Games leave in their wake in the host cities where they nest. Whether in Athens, Beijing or London, the hangover is the same no matter what national currency has been lifted.

Debt. Displacement. Militarization of public space. Gentrification on steroids. This also sounds a whole hell of a lot like life in the San Francisco Bay area, where rents continue to skyrocket amidst a stunning stratification of wealth.

San Francisco is now a finalist for the US bid to host the 2024 Summer Games, along with Los Angeles; Washington, DC; and Boston. Presentations to the International Olympic Committee will take place on December 16, and whichever city the USOC puts forward will be a front-runner to host the 2024 Olympics. This column is a plea for the people of the Bay to take a cue from Boston and start organizing now to make sure this does not come to pass.

The working people living in—and getting forced out of—San Francisco do not need long memories to call out the fool’s gold of hosting these kinds of mega events.

In 2013 San Francisco hosted the America’s Cup sailing race, the world’s elite yacht regatta. Organizers of the event assured the city it would be a guaranteed money-maker, a jobs-o-rama, a tourism boost, a can’t-miss win-win that would be funded in large part by private donors.

The only problem was that none of this turned out to be true.

In 2010, the city was told it would get a $1.4 billion economic pick-me-up, but in the end America’s Cup only created an impact of $364 million. Boosters promised almost 9,000 jobs but only 3,800 actually materialized. The private donors turned out to be phantoms, only kicking in about a fourth of the promised $32 million. Meanwhile, Larry Ellison, the billionaire CEO of Oracle, who was a driving force in bringing the event to the Bay Area, milked the event like his own private, golden cow. His yacht squad—Oracle Team USA—won the race in dramatic fashion and he attached Oracle’s annual customer trade-show conference like a barnacle onto the event. City taxpayers, on the other hand, lost money, some $5.5 million.

The Olympics are just like this, except for one small difference: three small zeroes. Instead of millions, with the Olympic games we’re talking billions. And instead of getting a billionaire’s fantasy yacht party, you’ll get a cavalcade of global elites who will expect nothing less than you to turn the city over to both their rule and plunder.

Business leaders from all four candidate cities have assured jittery citizens that hosting the Olympics will merely cost between $4 billion and $5 billion. Notorious construction contractors provide more realistic investments. Initial bids, floated in the early stages of the process, are scandalously low, designed to rally public support. But the history of Olympic city bidding is unequivocal: every Olympics since 1960 has run over-budget. In real terms, the average cost overrun was 179 percent, a far higher rate than that of other mega projects. The 2014 Sochi Winter Olympics magnified this inconvenient truth, racking up a $51 billion price tag, more than all previous winter games combined.

The possibility of San Francisco games costing less than $5 billion is about as likely as finding a one-bedroom in Pacific Heights for $400 a month. The San Francisco Chronicle’s Marcus Gilmer got it right when he asserted that the initial price tag anted up by the four candidate cities is &ldquo;ridiculously low.”

San Francisco Giants President and CEO Larry Baer is pushing the bid arm-in-arm with San Francisco Mayor Ed Lee and his senior adviser Tony Winnicker. Former Olympic swimmer Anne Cribbs is also on board—as CEO of the San Francisco Bay Area Sports Organizing Committee, she spearheaded San Francisco’s failed bid for the 2012 Olympics. The team also includes venture capitalist Steve Strandberg. The irony of Baer leading the charge is that the SF Giants—three world titles in five years—are one of the few teams to play in a stadium that wasn’t built on the public dime. They are living proof that private capital can finance their own games and do just fine.

Yet Baer—maybe with an eye on the next Giants stadium—is pressing hard for the games. He said, “It just seems like it’s sort of our moment in time for this region to shine on the international stage.” We always hear this sort of talk about a city being ready to step up to the world’s imaginary podium in the sky, but while we all crane our necks upward, the Olympics are wreaking real problems back on earth. Displacement and gentrification are amplified wherever the Olympics appear.

San Francisco already suffers from all of the problems that the Olympics would exacerbate. Earlier this year we saw protests focused on “Google buses,” the chartered shuttles ferrying tech workers from the city to Silicon Valley that are a glaring symbol of inequality. The Olympics will bring the equivalent of a platinum-plated fleet of Google buses, and, per IOC’s normal requests, their own special driving lanes.

Then there is police brutality. Where the Olympics go, crackdowns on the poor follow. In the wake of Ferguson and the demonstrations that have followed, people in San Francisco and Oakland—the home of Oscar Grant—should ask themselves if they want the kind of hyper-intense policing that come with the games.

In the wake of the America’s Cup, John Avalos of the San Francisco Board of Supervisors said, “The whole event has been nothing more than a stupefying spectacle of how this city works for the top 1 percent on everyone else’s dime.” With the Olympics, the same dynamic applies, only exponentially and in Technicolor: local taxpayers play the role of fiscal backstop, while a privileged sliver of the global 1 percent walks off with the rewards. The time to fight is now, SF. Let the looters of international sports know in advance that SF has a powerful tradition of protest that is ready to be wielded if the Olympics dare to try and make SF their new playground.