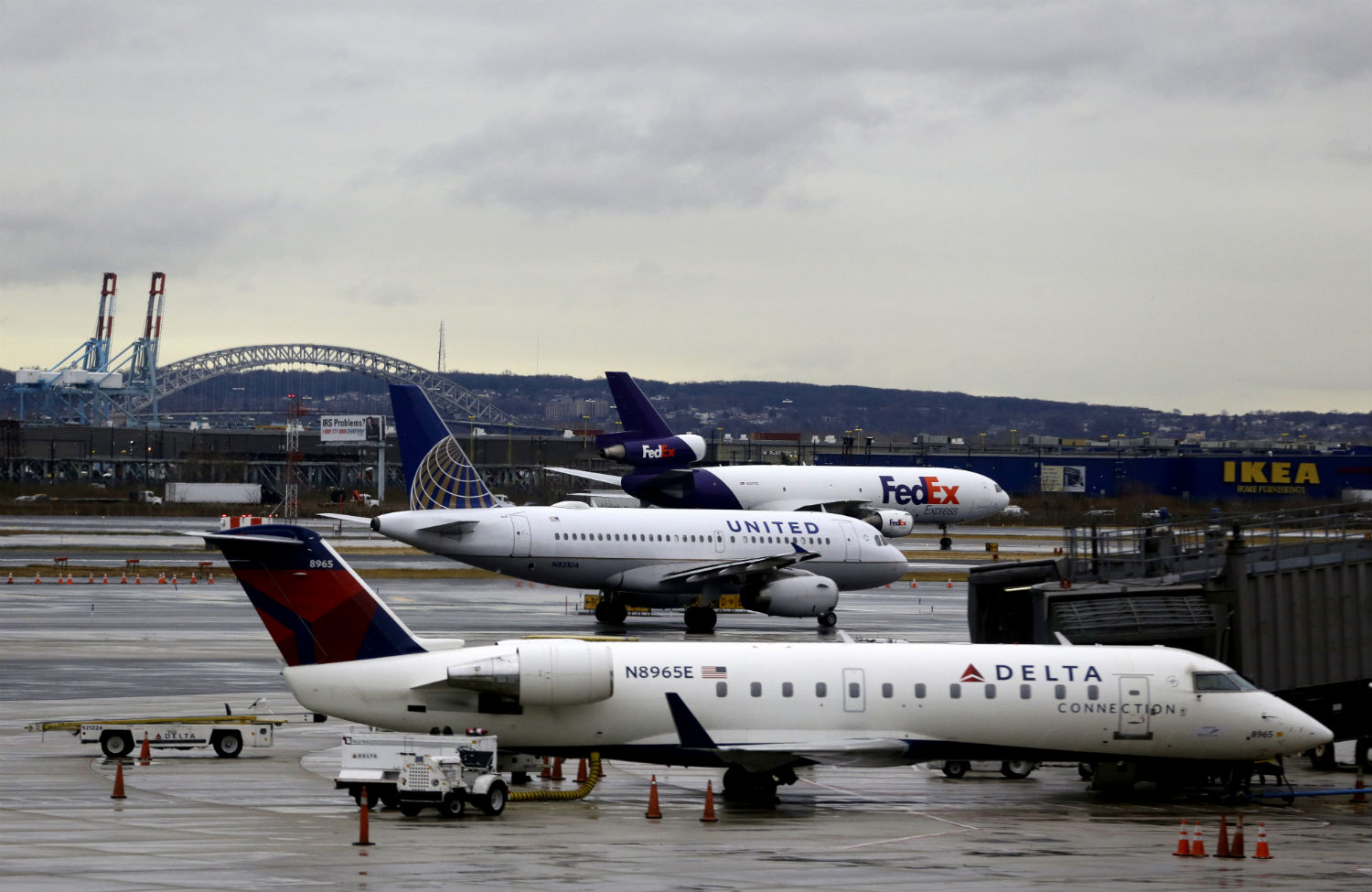 In a surprise move last week after months of inaction, the Port Authority of New York and New Jersey mandated a series of improved conditions for subcontracted workers at LaGuardia and John F. Kennedy airports. Executive Director Patrick Foye, in a letter to the CEOs of JetBlue, Delta, American and United Airlines, demanded that all workers currently making $8 to $9 per hour or less get a $1 per hour raise, with an eventual phase-in to an hourly wage of $10.10. The decision will cover some 8,000 subcontracted service workers who do much of the work that keeps the airports running: cabin cleaning, baggage handling, terminal security and ground transportation dispatching.

Though these low-wage workers have campaigned for better working conditions for over two years with the support of Service Employees International Union, Local 32BJ, the Port Authority, which oversees and leases land for both airports, had until now kept silent. Yet the language of the letter was unequivocal: “Providing an improved wage and benefits package to the thousands of hardworking men and women that make our airport systems the largest in the country is something that cannot wait,” Foye wrote. Those four airlines make up a vast majority of air traffic at LaGuardia and JFK.

While the Port Authority’s decision marks a hard-won advance for the airport workers, their victory was soured by one major omission: 4,000 subcontracted workers at Newark Liberty, who perform the exact same duties as their counterparts at the other regional airports, will not be covered by the new measures. Nor will workers at two other New Jersey airports run by the Port Authority, in Teterboro and Atlantic City. At the Queens-based hubs, workers will receive raises, get Martin Luther King Day as a paid holiday, and benefit from the agency’s stated promise to develop a three- to five-year plan with the airlines, contractors and union to improve wages and benefits for all airport workers. Those who work just across the Hudson River will gain nothing.

Derick Swaby, a 55-year-old cabin cleaner at Newark employed by PrimeFlight Aviation Services, is at a loss to understand why his workplace was left out of the landmark agreement. “I don’t see how you’re going to have a Port Authority that covers all the airports but has one set of rules at one airport and not at the next,” he said in a phone interview. “That’s ridiculous. If one state is in support of it, I don’t see why the other state would be opposing it.”

Interstate political tension seems to be the underlying reason for the Port Authority’s uneven mandate. While Democratic politicians in both states have voiced resounding support for the airport workers’ campaign, Republican officials, including Governor Chris Christie of New Jersey, have repeatedly opposed initiatives to raise the salaries of low-wage workers. Since the release of Foye’s letter, many progressive politicians have come forward to condemn New Jersey’s stalling on the issue. State Senate President Steve Sweeney, a Democrat, said in a statement, “Without identical action on the New Jersey side, employees who are performing the same job will essentially be defined as second-class workers…. Anything less than a direct, quick response would be a slap in the face to the men and women who work hard every day just to make ends meet.”

The bi-state Port Authority has long been split by these same deep partisan divides. On the same day that Foye, an appointee of New York Governor Andrew Cuomo, sent out his letter, his deputy executive director, Deborah Gramiccioni, fired back in public opposition. Appointed by Governor Christie in December to replace Bill Baroni, who resigned in the wake of the now-infamous Bridgegate scandal, Gramiccioni released the following statement:

We are absolutely in favor of reasonable wage adjustments negotiated through the collective bargaining process. But this directive raises complex labor, business and legal issues that our airlines, their business partners and employees are facing, and we need to consider the significant financial and operational impacts at our airports.

Gramiccioni claims that she did not receive word of the plan in advance, and her tersely worded statement contrasts starkly with Foye’s pledge that “the Port Authority is prepared to use every tool at its disposal to achieve these goals.” Not only did the two leading officers of the agency fail to develop a cohesive strategy for this major initiative, they did not even communicate about the plan before it was released to the public. Governor Christie’s office declined to comment for this article, and the Port Authority did not respond to repeated interview requests.

Kevin Brown, New Jersey state director and vice president of 32BJ, said in an interview with The Nation, “For the governor’s appointee to be coming out like that (a) shows how dysfunctional the Port is at this point. It’s a bi-state agency; it should have one response. And (b) shows an unwillingness to stand up for these workers who are making poverty wages.”

Gramiccioni’s statements are in line with the concerns of industry groups, who have also questioned the legality of the letter’s contents. Katie Connell, managing director of PR and communications for Airlines for America, sent the following comment via e-mail:

No company—in any industry—dictates to its vendors what their employees should be paid…. Airlines negotiate individually with their contractors to obtain services. It would raise antitrust law concerns for the airlines to share with each other the details of their agreements or to discuss their plans regarding the terms of their agreements with contractors.

Eleanor Fox, a professor of trade regulation at NYU Law School, says that as a state agency, the Port Authority can mandate that the airlines pay a certain wage to their workers. But, she cautions, if the Port Authority “induced or required” these competing airlines to agree on the wage, it would violate antitrust law.

These charges don’t seem to worry Foye or the New York and New Jersey officials who have come out strongly in support of the airport workers. Earlier in January, New York City Mayor Bill de Blasio, who vowed to “do all in my power” to help airport employees insisted, “[The Port Authority] should intervene. We’ll support them intervening.” Luis Quintana, who replaced Cory Booker as the mayor of Newark, said in a telephone interview, “I support the fact that people should get better wages. If it’s $10.10 in New York, it should be $10.10 in New Jersey.”

SEIU officials, who have vowed to continue campaigning and pressuring local officials until the same standards have been implemented at all three regional airports, deny the accusations of antitrust violations. According to Kevin Brown, “The Port Authority standards that the carriers and their contractors already adhere to impact costs that these business concerns willingly pay as the cost of doing business in this region.”

For now, workers remain caught in the middle of this struggle, with those in New York claiming victory and those in Newark questioning their bad luck. Demetrius DeBiase, a Newark resident who has worked as a baggage handler at the airport for six years, lamented the unwillingness of New Jersey politicians to take action.

“It’s sad that Governor Christie says that he’s the governor for the state of New Jersey and that we’re his people. If we’re your people, why are you treating us so badly? Why can’t you agree to make the minimum wage $10.10 an hour when you fly out of Newark airport and we have to handle your bag?”

Angie Jeanmarie, who, like Derick Swaby, works the graveyard shift as a cabin cleaner for PrimeFlight, also implored local officials to intervene. Jeanmarie, a 23-year-old Elizabeth, New Jersey, native, works from 11 pm to 7 am five nights a week to support her aging mother.

“If the wage went up, I would feel blessed. Right now its just me and my younger sister that’s working; we’re handling all the bills like paying rent, putting food on the table, keeping the lights on…. I just want the politicians to look at what people at the airport are going through. I hope they look at us and realize that we need this, that we’re working for this.”