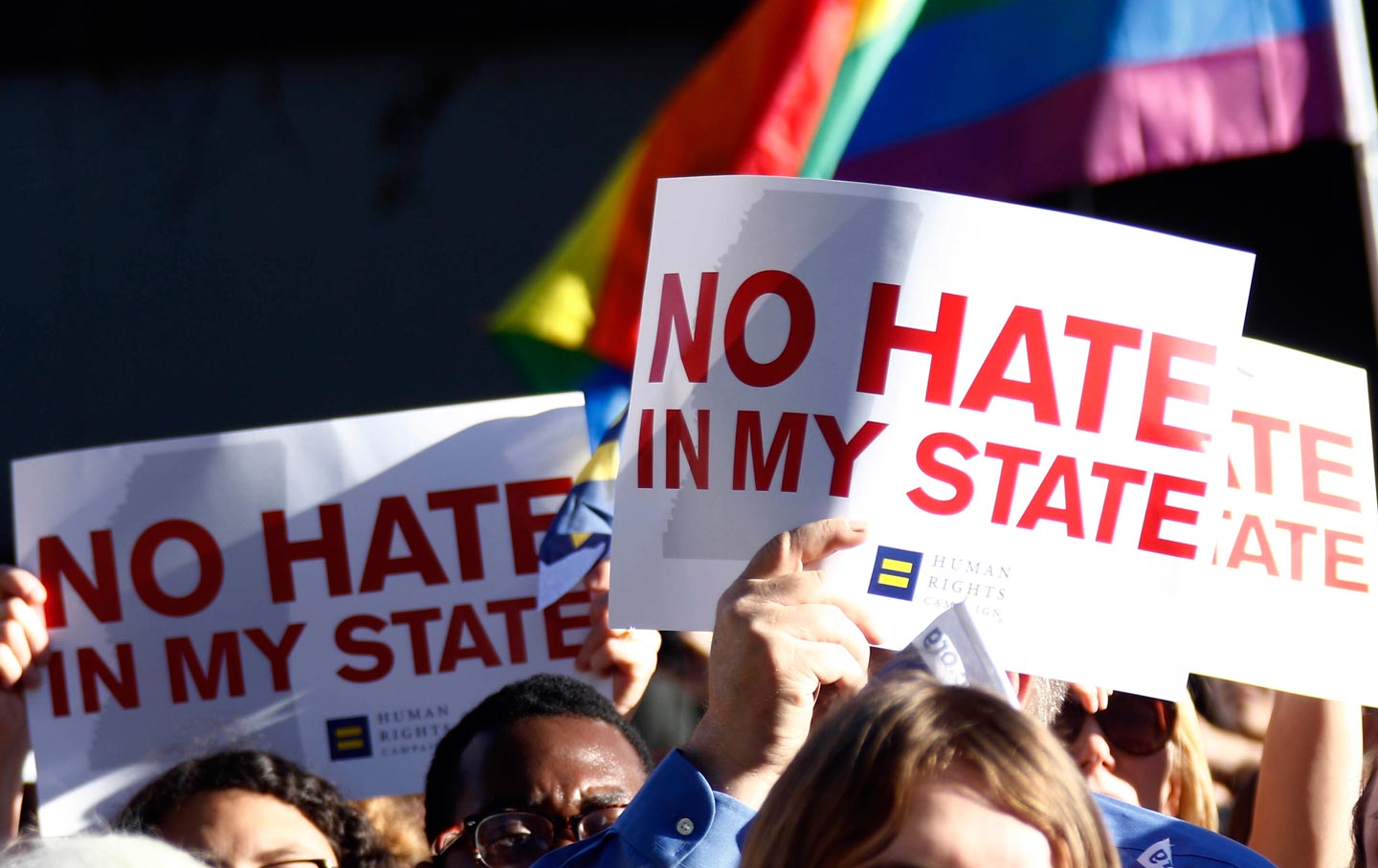 On Tuesday morning, Mississippi Governor Phil Bryant signed into law HB 1523—the “Protecting Freedom of Conscience from Government Discrimination Act”—one of the most sweeping of the nation’s “religious liberty” bills that are making the rounds in numerous red-state capitals this year. In the press they are often referred to as “anti-LGBT bills,” because they would give legal cover to those who want to discriminate against LGBT people out of “sincerely held religious belief.” Critics such as Ben Needham, director of Human Rights Campaign’s Project One America, has said the measure is “probably the worst religious freedom bill to date.” But there is an even more radical agenda behind these bills, and the atrocious attempt to deprive LGBT Americans of their rights is only a part of it.

If you are religiously opposed to other people having non-marital sex, Mississippi's "religious freedom" law could be the law for you.

According to State Senator Jennifer Branning, one of the Mississippi law’s original backers, the real victims of the story are not the LGBT couples denied services but people “who cannot in good conscience provide services for a same-sex marriage.” These are the true targets of discrimination, and we are invited to sympathize with the proverbial florist who balks at providing flowers at a gay wedding or the restaurant owner who refuses to serve a same-sex couple celebrating their wedding anniversary. But the text of the law also specifically protects the “sincerely held religious belief” that “sexual relations are properly reserved to” a marriage between a woman and a man. So if you are religiously opposed to other people having non-marital sex, this could be the law for you.

It is also inaccurate to think that this law is just about those who wish to refuse to perform a service. One of the more disconcerting sections of the law is that which discusses people who provide foster-care services. The government, we are told, will no longer be allowed to take action against any foster parent that “guides, instructs, or raises a child…in a manner consistent with a sincerely held religious belief.” If you want to know what that could mean, check out Focus on the Family’s “spare the rod” philosophy of child rearing. On its website, the religious-right advocacy group offers handy tips on “the Biblical Approach to Spanking.”

If the point were only to spare the fine moral sentiments of a few florists, why would the law’s sponsors seek such a wide-ranging exemption from the laws and norms that apply to the rest of society? A helpful clue can be found in a letter that the American Family Association sent out in support of the Mississippi bill before it was passed. (The AFA has been named a “hate group” by the Southern Poverty Law Center since 2010.) The bill, said the AFA, is crucial because it protects the AFA, and groups like it, from the “governmental threat of losing their tax exempt status.”

The people who drafted the bill on behalf of the Mississippi legislators get it. (Most of the red-state “religious liberty” bills were either drafted or, to some degree, inspired by the Alliance Defending Freedom—the “800-pound gorilla” of religious-right legal advocacy and itself a beneficiary of the great tax exemption game.) This is why the very first “discriminatory action” by the government the law prohibits is “to alter in any way the tax treatment” of any person or organization that abides by the newly sanctioned religious beliefs.

It’s about more than money, of course. The AFA and its allies on the religious right want to carve out a sphere in American public life where religion—their religion—trumps the law. It’s a breathtakingly radical ambition. And it upends the principles on which our constitutional democracy is based.

None other than the late Antonin Scalia put his finger on the problem. To make an individual’s obedience to the law “contingent upon the law’s coincidence with his religious beliefs” amounts to “permitting him, by virtue of his beliefs, ‘to become a law unto himself,’” he said. It “contradicts both constitutional tradition and common sense.” Scalia made these comments in his 1990 majority opinion in Employment Division v. Smith. In that case, the majority ruled that the state of Oregon could deny unemployment benefits to a pair of individuals who violated a state ban on the use of peyote, even though their use of the drug was part of a religious ritual. It was the overreaction to that verdict—on both the left and the right—that produced the Religious Freedom Restoration Act (RFRA) of 1993. Though intended only to ensure that laws did not needlessly burden the religious liberty of individuals, the RFRA sparked a wave of unintended consequences. It effectively planted the demon seeds of the current crop of “religious liberty” bills.

The AFA and its allies on the religious right want to carve out a sphere in American public life where their religion trumps the law.

Employment Division, as it happened, involved a religion—that practiced by the Native American Church—with which Scalia likely did not identify. Which brings up a crucial point about the Mississippi law and its numerous cousins. These “religious liberty” bills are really intended only for a particular variety of religion. Indeed, HB 1523 protects you only if your religion involves a specific set of beliefs—such as the religious belief that “man” and “woman” “refer to an individual’s immutable biological sex,” and that “sexual relations are properly reserved to” marriage. To speak frankly, the law was designed to advance the claims of conservative Christians, and it would never have become law otherwise. If you think that every religion will find as much liberty in the laws of Mississippi, then I have a Satanic temple to sell you.