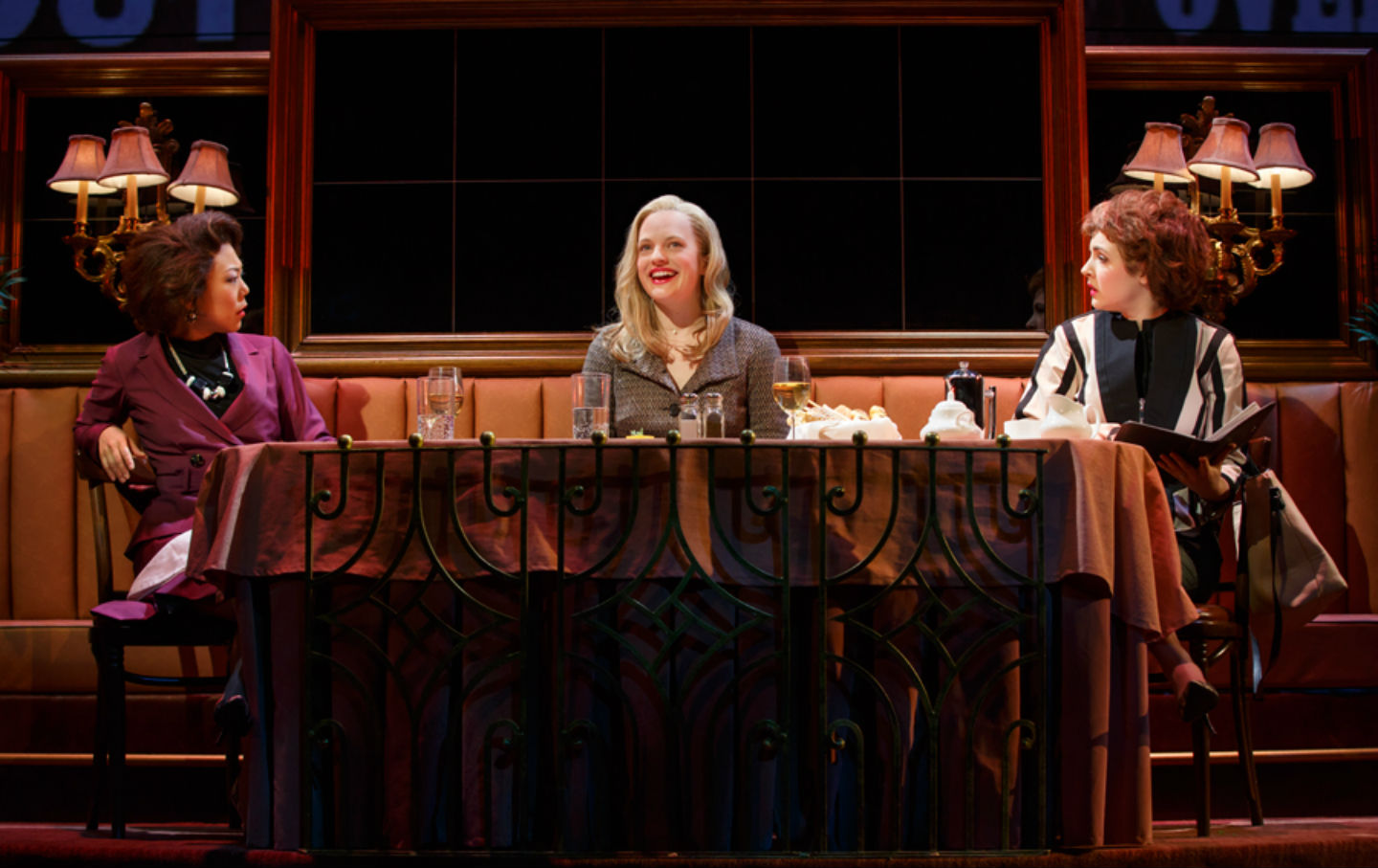 Strictly on the basis of demographics, the revival of Wendy Wasserstein’s The Heidi Chronicles that opened on Broadway last month should have been an excellent investment. More than two-thirds of Broadway ticket-buyers are women; nearly 80 percent have graduated from college (and nearly 40 percent have earned graduate degrees). They come from households with an average income of more than $200,000; their average age is 44. In short, the Broadway audience looks a lot like Heidi. Plus Elizabeth Moss (Mad Men’s Peggy Olson) brings a sweet sort of bewildered charm to the title role.

And yet, those affluent, well-educated, mid-40s women have not been flocking to the show. The production, directed by Pam Mackinnon, has filled no more than 75 per cent of the seats at the Music Box in any given week. Last week, that number sank to 50 percent and producers announced that the show would close on May 3 after 80 performances. The New York Times quickly concluded that the play just doesn’t speak to contemporary feminism any more. Never mind the unexamined Times-y assumption that Broadway ticket sales are the best measure of a show’s popularity or a playwright’s relevance. (In fact, Wasserstein’s plays enjoy frequent productions in professional, community, and academic theaters all over the country. The Dramatists Play Service, which publishes and licenses her plays, lists more than a dozen currently on stage or in the works around the country.) And never mind the absurd notion that cutting-edge feminism draws anyone to Broadway. Still, as an audience for this particular production, Heidi’s sisters have left her stranded. Could it be that Heidi speaks too well to the feminism of the Heidi demographic—and that she doesn’t measure up?

White, well-to-do professionals like Heidi (she is a tenured professor at Columbia University), still seem preoccupied with the question—as Anne-Marie Slaughter put it in a much-discussed Atlantic article a couple of years ago—“Why Women Still Can’t Have it All.” That was never really Heidi’s problem, though it’s typically how the protagonist’s dilemma has been described. Heidi’s predicament, rather, is that for most of the play she doesn’t take charge of her life. “LEAN IN!” one wants to shout at her—not as a strategy to advance at work, but as basic dramaturgy. Heidi is a passive protagonist. What 40-something overworked second-shifting Broadway ticket-buyer has patience for that?

The play begins nearly at the story’s temporal endpoint, in 1989, when Heidi is an accomplished art history professor lecturing about unjustly ignored female painters of earlier centuries. It then flashes back to the Mad Men era—Heidi as a brainy teenager bored at a school dance in 1965—and hops up through the years, tracing Heidi and her friends in a dozen scenes to return us to the late ’80s. While Heidi holds fast to—well, to what is never exactly clear—everyone else seems to change as smoothly and instantly as the newsy background slides that designer Peter Nigrini projects onto the set’s shiny white walls to provide instant context: jowly Nixon, campaigning Mondale and Ferraro, headlines about the defeat of the ERA. Pop songs—specified in Wasserstein’s script—do the same: Betty Everett, Janis Joplin, Fleetwood Mac.

The costume designer Jessica Pabst keeps Heidi in loose-fitting outfits and muted colors through the decades while the people around her sport garish exaggerations of fads of the moment, from patched bell bottoms and lace-up suede boots (at a consciousness-raising group Heidi visits in 1970) to a magenta power suit and spikey heels (at a 1984 lunch with her longtime friend who has ascended the ladder in Hollywood). Heidi never quite fits in visually—a vivid correlative to her reluctance to join the action. She hangs back, dithers, observes, reacts.

When it premiered in 1988 (with Joan Allen as Heidi) Wasserstein was widely hailed as a pioneering feminist playwright, giving voice to the disappointments accomplished, well-educated women were reluctant to air. The anti-feminist backlash was in full swing at the time. The very week The Heidi Chronicles opened, Good Housekeeping launched a print and broadcast ad campaign that would never have gotten past Peggy Olson: it extolled (as it invented) the “New Traditionalists,” women said to be fleeing the dull workplace to find proper and complete fulfillment in serving their husbands and children.

By then, Wasserstein (who died of lymphoma in 2006 at age 55) had written two acclaimed comedies that filled the stage with sassy women—a rare sight then (and now) even off-Broadway, where they played. In Uncommon Women and Others (1977)—the proto-Girls—a group of bantering, sex-obsessed women’s-college almost-graduates try to figure out how their fancy educations will help them find happiness in a world that instructed them to locate it only in old-time matrimony. In Isn’t It Romantic (1983) two slightly older, even more self-absorbed women, who are pursuing careers in New York, pretty much do the same. Wasserstein’s perspective was always comic—she could write snappy, self-deprecating one-liners and capture a zeitgeist in a zinger that let audiences feel smart. (“I envy [men’s] confidence. I envy their options,” says one of the uncommon women as they consider Freud’s famous theory, “but I never wanted a fleshy appendage.… The only people who have penis envy are other men.”) But Wasserstein’s barbs are always softened by affection for her characters. The plays proceed in short episodic scenes that often play like sketches, ending with tidy tags and punch-lines.

Heidi keeps that form and the wit, but injects a strain of melancholy. Now that she has aged and still hasn’t worked out how to thrive in both love and career, Wasserstein’s protagonist isn’t so funny any more—but the women around her are meant to be hilarious. The in-your-face lesbian, the let’s-make-nice housewife, the squealing, corporate wannabe: they are the recognizable types who serve as butts of the jokes. Structurally, the play sometimes feels like a woman who apologizes for herself the minute she asserts something. Especially in the first act, whenever Wasserstein touches complexity, she jolts away and goes for the jocular. At the C-R meeting, for instance, Heidi seats herself on the edge of the circle—her self-consciousness raised by the proceedings—and joins the discussion only when pressed. She quickly comes to admit that she seeks her own value in the attentions bestowed or withheld by a longtime occasional lover, a “charismatic creep” named Scoop, but her insight is quickly abandoned for a patronizing yuk as the women cluster into a group hug and sing a campfire song. (Just calling to order the “Huron Street Ann Arbor Consciousness-Raising Rap Group” drew an uproarious laugh from the audience at the Music Box the night I saw the show.) The scene parodies the sisterly support it also actually reveals.

Perhaps it’s no surprise that the work long hailed as Broadway’s path-breaking feminist play barely passes the Bechdel test. It’s not just that (apart from Heidi’s three monologues) there are barely any scenes without men in them in which the women discuss something other than men; it’s that the male characters are the most fully written. Scoop (Jason Biggs) picks up Heidi at a Gene McCarthy fundraiser in 1968 and keeps their affair on low boil until he ends up marrying (and cheating on) a woman who, unlike Heidi, does not threaten him as his intellectual equal. Heidi hits it off with Peter (Bryce Pinkham) at the earlier high school dance and the play’s most poignant scenes take place between them: first, when she refuses to hear him telling her he’s gay and later when he demands she stand by him as he begins losing friends to AIDS. The men act; Heidi responds. They triumph; she shrinks.

Though in the course of the play, Heidi graduates from Vassar, completes a PhD at Yale, wins research grants, writes a highly regarded scholarly book, and acquires her position at Columbia, she complains of feeling worthless.

Heidi doesn’t blame her pointless pining for Scoop and Peter for her loneliness, however. She blames the women’s movement. Feminism, that no-good, double-dealing deceiver, raised her expectations and failed to deliver. In a famous second-act monologue—a speech she is giving as an alum to the girls of the Miss Crain’s School—Heidi melts down, confessing her unhappiness, petty jealousies, and sense of betrayal. “I feel stranded,” she says. “I thought the whole point was that we wouldn’t feel stranded. I thought the point was we were all in this together.”

That’s the scene that finally sent me into a caustic fury when I saw the Off-Broadway production back in 1988 (and wrote a bitter review of it in The Village Voice about how Heidi reaped the rewards of feminism without absorbing its lessons.) A quarter of a century later, it didn’t get much of a rise of out of me. I just couldn’t get angry this time—and not only because I’m a little bit less of a hothead or because I’ve since realized how silly it was to expect feminist structural analysis from a mainstream comedy. (Hell, you couldn’t even expect it from The Nation in 1989. The Heidi Chronicles collected its Pulitzer Prize just as Christopher Hitchens held forth in this magazine about how feminism had made women selfish by encouraging them to think that they should have sovereignty over their own bodies.)

No, I reacted with a strange sympathy, first because Moss—striking a cool tone of understated bemusement for most of the play—drew piercing pathos from that speech. Her Heidi seemed surprised to find herself saying such things, stunned by the crumbling of her chipper exterior. I couldn’t help feeling sorry for her as she rambled on, lost and rudderless. But more than that, the passage of time reveals The Heidi Chronicles to have been catching the rise of the neoliberal feminism that prevails in elite precincts today: that every-woman-for-herself kind of leaning in that makes no demands on the workplace or the state and builds no solidarity with others. The kind that today’s Heidi-like theater-goers don’t need to wait to see a benighted sister embrace.