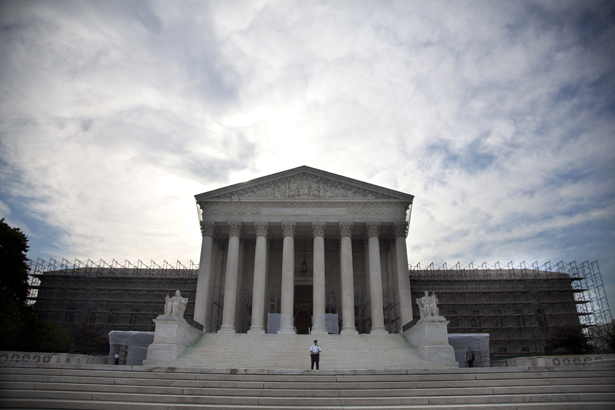 Sometime soon, certainly by the late-June conclusion of its present term, the Supreme Court will tell us its decision in Harris v. Quinn, arguably the most important labor law case the Court has considered in decades. Harris has already generated a great deal of attention and worry in labor circles, and nearly as much enthusiasm and celebration in pro-business ones—reflected in the extraordinary number of friend-of-the-court briefs filed by advocates on both sides. The case threatens the existence of the “agency shop,” a bedrock institution in American labor relations—one relied on in the most successful recent union organizing, and that is decisive to the health of public sector unions. Here’s what Harris is about.

Unions typically seek to limit this free-rider problem by negotiating clauses requiring all unit employees to pay their “fair share” of the union’s costs —for union members, this is done through dues; for nonunion employees, by some calculated “agency fee.” Along with capturing needed resources, these clauses send a cultural message: if not of solidarity then at least distaste for free-riders.

The Supreme Court has long recognized the legitimacy of such fair-share/agency-shop agreements, in the private as well as the public sector, within limits. The limits are that unions may compel nonunion employee contributions only for the costs of negotiating and administering collective bargaining agreements. The costs of all other union activity—new organizing, lobbying, public education, elections, etc.—are deemed “nonchargeable,” meaning that they are paid by nonunion employees at their discretion.

Which brings us to the plaintiffs in Harris v. Quinn—a group of nonunion Illinois homecare workers employed by the state and represented by the National Right to Work Committee (NRTWC) Legal Defense Foundation, which argues that all public sector agency shops should be declared unconstitutional on the grounds that they violate the First Amendment’s prohibition against state compulsion of political speech. All public sector bargaining is intrinsically political, the NRTWC lawyers claim, since it affects state budgets. And if public sector bargaining is a kind of political speech, no state can order anyone to pay for it.

Now, the NRTWC has argued for years against union security and for the sanctity of what we’ll call the “right to free-ride” (RTFR), although it prefers the term “right to work.” Such arguments have already persuaded the legislatures of twenty-four states, most recently Michigan, to enshrine this “right” in their private sector labor laws. In Harris it aims, in one fell swoop, to misuse the First Amendment to nationalize this success for the whole public sector. It’s going for the “kill shot.”

NRTWC success here would be a disaster for labor, particularly for the public sector unions that traditionally rely more heavily on agency shop agreements. It is certainly possible to form a union, even a public sector one, in most RTFR states. But you can search long and hard before finding more than one or two with any real power. Blame human nature, or capitalism’s corrosion of the soul, but the truth is that most workers will eventually take the opportunity to free-ride on a union’s work if it is offered, especially if the union is already weakened because some of their fellow workers have chosen this route. Governor Mitch Daniels demonstrated this truth years ago in his overnight conversion of Indiana’s public sector into an RTFR zone. Within a couple of years, the revenue from represented workers in public sector unions was down some 80 percent. We see it today in Wisconsin, as the effects of Governor Scott Walker’s RTFR act sink in. AFSCME’s revenues are already down 60 percent.

The Harris plaintiffs build on these and other state-led efforts to destroy public sector unions. But they also draw some sustenance from the Court, in particular its 2012 decision in Knox v. SEIU, where Justice Samuel Alito offered the Court’s opinion. Before Knox, the law allowed unions to simply offer nonunion workers an opportunity to decline paying nonchargeable costs and then bill those who did not take it. Knox scuttled this opt-out tradition for an “opt-in” regime, requiring that unions get individual consent to payment from each nonunion worker affected—for unions, obviously, an onerous business. Before reaching this conclusion, Alito went on at some length about the importance of guarding nonunion public employees from union attempts to compel their speech, and derided fair-share agreements in light of the First Amendment as an “anomaly.” The Knox decision contradicted much of what the Court has recently said about the First Amendment rights of government employees (or, in Citizens United, shareholders). But it advanced a project now embraced by much of this Court: the curbing or dismemberment of public sector unions. At oral argument in Harris, at least four justices (Alito, Kennedy, Roberts and the ever-silent but reliably reactionary Thomas) appeared quite prepared to take the next step in that project, as suggested by the NRTWC; a different four (Breyer, Ginsburg, Kagan and Sotomayor) clearly did not.

And so, somewhat remarkably, the future of public sector unionism seems to rest now in the mind of the nation’s most famous, combative, witty, right-wing and self-styled constitutional originalist, Antonin Scalia.

Hardly a big friend of labor, Scalia actually rejected the NRTWC’s current argument nearly a quarter-century ago, in an opinion concurring in part and dissenting in part with the Court’s decision in Lehnert v. Ferris Faculty Association (1991). There he affirmed the logic of fair-share agreements, even in the public sector and the full light of the First Amendment. Having required unions to serve nonunion employees alongside their members, Scalia argued, the state had to support at least limited fair-share, since not doing so would make the basic unfairness of free-riding “not incidental, but calculated, not imposed by circumstances, but mandated by government decree.”

Labor is hoping that Scalia will stick to that thinking in Harris and fully and firmly reject the NRTWC’s argument. But in truth, nobody knows what he, or some jerry-rigged majority of the Court, will do. It might accept part of its argument, perhaps excluding agency shops from Medicaid-supported homecare or other “nontraditional” sorts of public employment but preserving the institution elsewhere. Or it could, indeed, accept it all. What’s certain is that many on the right, including several on the Court, tremble with excitement at the prospect of delivering the NRTWC’s kill shot. And that has labor very, very nervous.