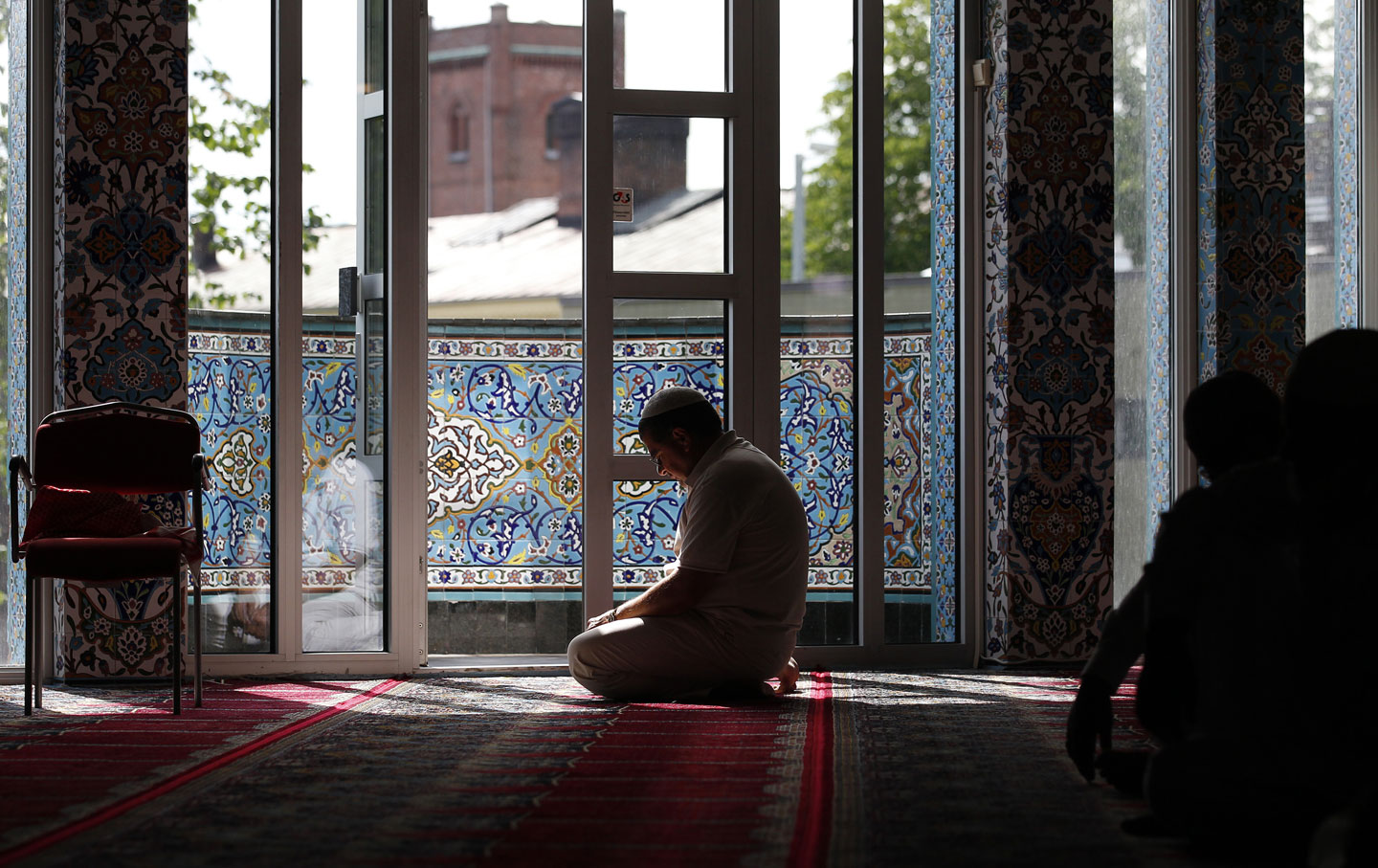 A mosque in Norway (Reuters/Cathal McNaughton)

Immediately following the January attack on Charlie Hebdo in Paris, the liberal hawk George Packer wrote a screed on The New Yorker’s website, proclaiming that “Islam today includes a substantial minority of believers who countenance…a degree of violence in the application of their convictions that is currently unique.” Also in January, Dissent posted “Islamism and the Left,” a long essay by the liberal philosopher Michael Walzer, composed before the Paris attacks, in which he wrote: “Islam today is a religion capable of inspiring large numbers of men and women, mostly men, to kill and die on its behalf.” And last October, self-proclaimed liberal Bill Maher told the guests on his HBO show Real Time, which included the writer and militant atheist Sam Harris, that “liberals need to stand up for liberal principles.” Harris agreed: “We have to be able to criticize bad ideas,” he said. “Islam at this moment is the mother lode of bad ideas.”

Over the last several years, we’ve become accustomed to associating the anti-Islam crowd with conservative populism. An anti-Sharia movement pops up across the country in full nativist regalia; a loony Florida pastor with a cartoon mustache burns the Koran; well-organized demonstrators chant against a proposed Islamic Center in Manhattan (the “Ground Zero mosque” debacle); and Republican candidates pander to right-wing voters’ fears of Islam itself—remember when Herman Cain vowed not to appoint Muslims to his future cabinet? It all looks a little crazy from the left.

The 2015 version of this anti-Islam rabble-rousing saw Steven Emerson, a so-called terrorism expert, proclaiming on Fox News that Birmingham—the second-most-populous city in Britain—had become a “no-go zone” for non-Muslims. Louisiana Governor Bobby Jindal repeated and later doubled down on this claim that no-go zones existed—even after it was made clear that Emerson’s precious factoid was pure fabrication.

The right’s Islamophobia is troubling—but, let’s be honest, often consoling to the left. Why? Because it not only demonstrates an allergy to things like evidence, but also brings clarity to the ways that right-wingers are instrumentalizing the discussion of Islam for their own political purposes. Jindal, a former Rhodes Scholar, must have known that what he repeated was a lie, but he repeated it nevertheless, because it’s a lie worth telling to shore up his base.

So what about the liberals? Of course, they too have sunk their teeth into anti-Islam polemics in the not-so-distant past. Writing in The Nation immediately after 9/11, Christopher Hitchens famously called the terrorist attacks “fascism with an Islamic face,” and Paul Berman quickly became an expert on Islam and politics in 2003 with the publication of his book Terror and Liberalism. But in the first decade of the “war on terror,” as Bush’s foreign policy destroyed rather than democratized Iraq, the liberal anti-Islam banner was carried not so much by liberal hawks like Packer as by fundamentalist atheists like Harris, Hitchens and Richard Dawkins.

Lately, however, their dinner party has gotten bigger: liberal atheists and liberal hawks are now eating at the same table, with Michael Moore seated next to Bill Maher. (Moore, an antiwar liberal, recently defended Maher for his views on Islam. When Christians do horrible things, he opined, “we speak up—loudly. So why not speak up when Muslims do it?” But that’s exactly the point: we blame individual Christians—not Christianity—for their actions, but Islam for the actions of Muslims.) This situation of liberal unity and liberal and conservative concordance on the evils of “Islam” should be troubling to the left, since it provides an ideological meeting ground for a continued “war on terror.” It’s also leading many Muslims to ask: “Why do they hate us?”

Today, it’s obvious that much of the world where Muslims live is mired in violence, but is Islam really the cause of that violence? Needless to say, simply because someone claims a violent act in the name of Islam doesn’t make it Islamic. Nor is there a single central authority among the world’s 1.6 billion Muslims to hold accountable for the actions of various Muslims; no one elected the Charlie Hebdo killers. But the idea that Muslims bear collective responsibility for individual acts is an old story, and it derives from the Orientalist trope that everything Muslims do anywhere is motivated solely by their faith in Islam. The serious study of other social phenomena has always required grappling with history, psychology, economics, the role of the state and more. But when it comes to Muslims, all of that is left to one side, and only our preconceived ideas of Islam remain.

Specifically, the problem with today’s liberal anti-Islam crowd is that they won’t countenance context or complexity. They justify their positions by arguing on the level of “ideas,” although their knowledge of Islamic theology and jurisprudence is sorely limited (few to none read Arabic), and their focus on “ideas” conveniently allows them to bracket off the messy history of America’s “war on terror.” These liberals argue that the problem is “Islam today” (not “Islam” per se), but then they deliberately avoid thinking about what makes today different from yesterday. Wouldn’t such a consideration mean reckoning with the various ways that the “war on terror” feeds the creation of the very terrorism it is supposed to eliminate?

Such self-delusion is what makes the current outburst of liberal anti-Islamic philosophizing especially distressing, though it illustrates a useful distinction between Orientalist and Islamophobic ways of thinking. The anti-Islam positions of liberals, like those of conservatives, are instrumentalizing hostile attitudes toward Muslims into policy. But the anti-Islam positions offered up by conservatives today mostly serves a domestic (sometimes evangelical) agenda that relies on a fear of the Muslim “other” to prove that a mythic America is in danger of slipping away. With liberals, it’s different: their Orientalism at this moment works largely to continue and possibly expand the “war on terror” overseas. Packer writes that France must have a “renewed debate” regarding its Muslim citizens after the attack on Charlie Hebdo, but that in “other places”—presumably places peopled with Muslim “others”—“the responses have to be different, with higher levels of counter-violence.”

But surely the profound failures of the ”war on terror” should be evident to Packer and to anyone else looking. Why, then, is it so hard to understand that the violence of the “war on terror” produces yet more violence? Over the last fourteen years, the number of victims of global terrorism has mushroomed fivefold, according to the Institute for Economics and Peace, with the largest increase occurring between 2012 and 2013. While not every act of terrorism is a direct result of America’s “war on terror,” this latest war is by any reasonable measure an unmitigated disaster, spreading to ever more countries and spiraling out of control.

Blind confidence by liberals and conservatives alike in the stated purposes of the “war on terror” has also enabled successive administrations to deliberately obfuscate or even withhold uncomfortable realities from an American public that doesn’t want to hear them anyway. During the same tragic week of the Charlie Hebdo killings, while Americans were celebrating the virtues of free speech, the ACLU was filing a brief to compel the Obama administration to release thousands of images of the US military’s abuse of detainees in Iraq and Afghanistan that the government doesn’t want you (or anyone else) to see.

This sort of structural turning-away from America’s own actions in this war is not limited to images. When the Associated Press caught the New York Police Department spying on virtually every element of Muslim life in the tristate area, the Center for Constitutional Rights and others filed suit against the city of New York—but in February 2014, the court dismissed the case. What’s interesting is how: in his summary opinion, Judge William Martini did not chastise the NYPD for its actions; in fact, he encouraged the police. He did, however, admonish the Associated Press for revealing this noxious program and its details.

The same logic of blaming the messenger pervades the discussion of the Senate report on CIA torture: more than half of the American public believes the executive summary should not have been released, and the actual report remains classified. When it comes to the “war on terror,” we work hard to keep the truth from ourselves.

And within that report, we can finally read how Abu Zubaydah, the CIA’s first detainee in that war, was deprived of sleep for days on end; denied necessary medical care (resulting in the loss of an eye); confined in a coffin-size box for 266 hours, as well as in a tiny box only twenty-one inches wide by thirty inches long for nearly thirty hours; and waterboarded at least eighty-three times. We were told by the government that this harsh treatment was necessary because CIA interrogators suspected that Abu Zubaydah had information about another terrorist attack planned in the United States. But the Senate report reveals a very different truth: the CIA tortured Abu Zubaydah despite the fact that he was already cooperating. Indeed, their objective was, according to an internal cable, “to achieve a high degree of confidence” that Abu Zubaydah was “not holding back actionable information concerning threats to the United States beyond that which he has already provided”—that is, prior to being subjected to brutal treatment. In other words, the CIA tortured him to make sure he had nothing more to say. If he spoke, the torture worked; if he was silent, the torture worked. The agency jimmied up a system in which the torture didn’t need to produce anything—least of all actionable intelligence—to be considered a success.

We can take this terrible example as a metaphor for the whole “war on terror,” which has created a self-serving political culture that allows us to silently evade our national responsibility while loudly projecting collective blame onto abstract “others.” If we want a better, saner, more just future, then the “war on terror” must come to an end—and for that to happen, we must become more critical and discerning about the full spectrum of horrors that have occurred (and are still taking place) during this war. “It is part of the mechanism of domination to forbid recognition of the suffering it produces,” the German philosopher Theodor Adorno wrote. Only when we face up to our delusions and actions and stop torturing others into silence will we be able to keep ourselves out of the darkness.