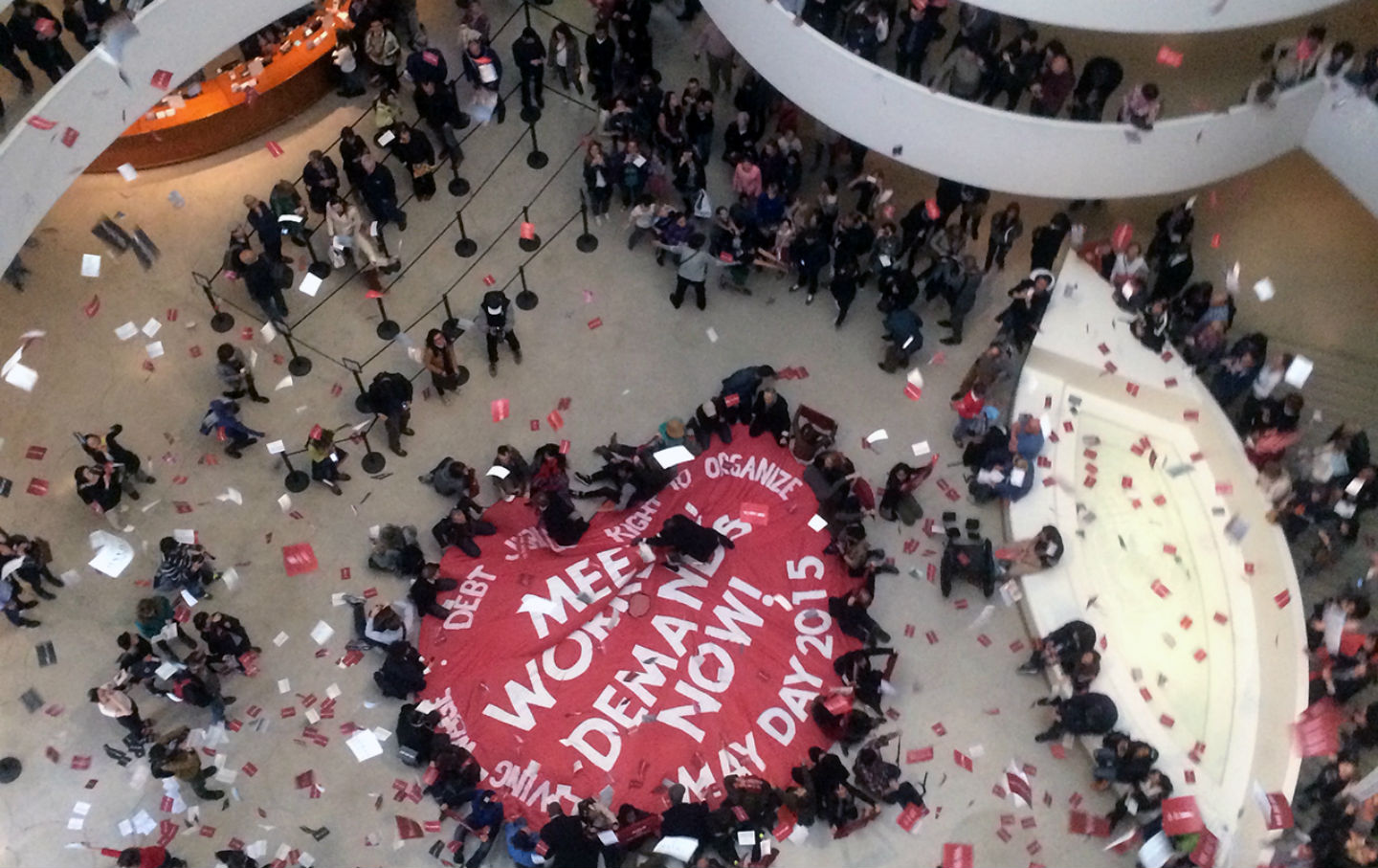 GULF occupies the Guggenheim on May Day, 2015. (Photo courtesy of Gulf Labor Coalition.)

The hushed murmur of ambling museumgoers at the Guggenheim on Manhattan’s Upper East Side was rudely interrupted on Friday with chants and a round red banner bursting across the lobby: “Meet Workers’ Demands Now!”

As guards scrambled to snatch the sign up, the flash mob sat down and pinned it to the floor, declaring, “We are here, in solidarity with all workers. Happy May Day!”

The “indefinite occupation” of the art museum—which dissipated after some tug-of-war with security personnel and then moved into a protest with other groups outside—was the latest salvo in a series of escalating protests led by the Global Ultra Luxury Faction (GULF). Representing the writers, artists, and scholars of the Gulf Labor Coalition, they’re pressing the demands of migrant workers contracted to work at a forthcoming Guggenheim site in Abu Dhabi.

The protesters are challenging the corporate link between the Guggenheim effect (complete with Gehry architecture) and United Arab Emirates’ global branding campaign via a tourist idyll known as Saadiyat Island. This oasis of soft power, which also features controversial branches of the Louvre and New York University alongside other luxury attractions, is fueled by masses of impoverished migrant labor trafficked into the region from South Asia.

Though the Guggenheim has promised to provide some labor protections, Gulf Labor is pushing core labor demands on behalf of workers who have been or will be contracted for the development in partnership with Abu Dhabi’s Tourism Development & Investment Company: “uniform and enforceable human rights protections,” a living wage, compensation for workers indebted by predatory recruitment fees and relocation costs, and, ultimately, a transparent accountability process for employers and labor representation for workers.

“They’re not able to speak for themselves, so we’re amplifying what they want here today,” said New York University professor and Gulf Labor activist Andrew Ross, referring to workers the group interviewed. “They want a living wage above all; they don’t have one. And they want recruitment debt settlement, which is a huge burden on their lives.” The right to organize was perhaps their most ambitious demand, given the structural marginality of the migrant labor force. Until migrant workers are able to organize on their own, Gulf Labor has for months been intensifying pressure on the Guggenheim as the construction contracting process continues.

In response to protests as well as petitions and private outreach by advocates, the Guggenheim Foundation issued a statement, contending, in part: “The complex global issues surrounding migrant employment cannot be solved by a single project, but we are working fully within our sphere of influence to advocate for progress.”

The coalition counters that the Guggenheim—which expressed dismay on Friday and temporarily shut down the museum—has repeatedly failed to respond adequately to demands for concessions that it could offer immediately, such as a fund for indebted workers and a wage increase.

Gulf Labor’s business proposition should fall well within the Guggenheim’s sphere of influence: as a global institution with enough cultural capital to launch a glamorous Persian Gulf island outpost, the Guggenheim shouldn’t have extraordinary difficulty paying a fair wage to the people building its development. (Not to mention, such measures would bring the development into compliance with basic international labor standards.)

Research investigations by Human Rights Watch (HRW) and Gulf Labor have revealed that workers at Saadiyat Island are locked into a coercive guestworker system, known as kafala. The system, used for various mega-developments in the Gulf region, gives sponsoring employers near-complete control over their work and movement, leading to debt bondage and tremendously exploitative jobs with virtually no labor protections.

Another scathing HRW report published in February revealed that, despite nominal contracting and labor reforms, workers are still extremely vulnerable to exploitation, with deeply inadequate mechanisms for employer accountability or recourse for abused workers; meanwhile, labor actions have been fiercely suppressed.

Five years on, Saadiyat Island remains tainted by a systemic lack of state and corporate accountability, while NYU, the Louvre, and the Guggenheim have failed to ensure compliance with the standards that they’ve publicly touted as a resolution to their labor public-relations crisis.

With Gulf workers still braving forced labor, extortion, and exile, the protest on Friday was a small gesture of solidarity to help bring those grievances to the Guggenheim’s home turf. The guerrilla aesthetics—a storm of thousands of pro-worker leaflets, a chorus of “Which Side Are You On?”—were designed not just to disrupt the museum’s pristine white interior, but to evoke historical moments when the artistic and political vanguards were intertwined, and the art world wasn’t just a playground for elite cultural tourists but an open landscape for insurgent ideas.

The project of resolving this moral dissonance also drives Gulf Labor’s human rights research: Its investigators were troubled not just by the workers’ rough living conditions but the degree to which workers were isolated, walled off from the enclave of worldly extravagance they were helping to construct. Rather than alienate their labor, the researchers argued, “we must insist that migrant workers be recognized as full participants of the broader society they live and work in.”

The same desire to collapse the divide between the art world and the masses drove May Day’s occupation. “The Guggenheim is not some corporate target that we’re demonizing. It’s part of our community,” Ross said, as protesters were shunted off. “We’re artists and writers. This is our space. If Guggenheim wants to be part of our community, there are certain ground rules of fair conduct and fair labor that they should be abiding by.”

So, briefly, labor’s voice resonated through the museum’s cavernous lobby, and workers indirectly reclaimed a little of their fair share of the world they helped build—the Guggenheim effect’s unexpected echo.