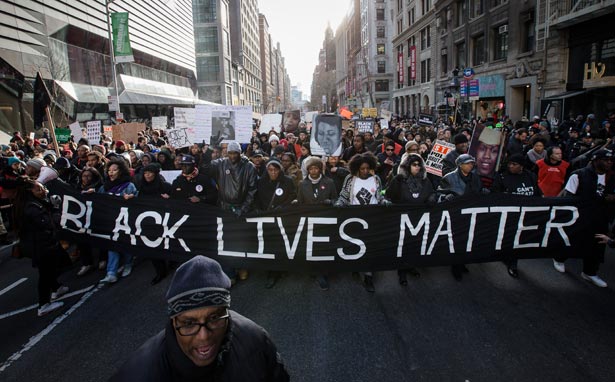 Demonstrators march in New York, Saturday, Dec. 13, 2014, during the Justice for All rally and march. (AP Photo/John Minchillo)

The movement challenging the criminal justice system’s treatment of black people continues to build this week. On Monday morning, Bay Area organizers blockaded entrances to Oakland Police Department headquarters and brought traffic to a standstill on nearby Interstate 880. In Los Angeles, attorneys staged a die-in at a downtown courthouse on Tuesday. More than 100 protesters lay in the rain holding signs that read “Lawyers 4 black lives” and “No one is above the law.”

Actions such as these in California follow a weekend of nationwide protests that brought tens of thousands to marches and rallies in New York, D.C., Boston and elsewhere. For three weeks, since a Staten Island grand jury decided there was no need for the officer who killed Eric Garner to stand trial, people have been in the streets. And the policy experts and activists I’ve spoken to this week say the movement is only growing.

Matt Nelson, organizing director at the national racial justice organization ColorOfChange, has participated in actions in Ferguson, Oakland and Berkeley. He said the use of force by police, such as the plainclothes officer who pulled a gun on a crowd in Oakland and excessive use of teargas is building the movement by further politicizing protesters.

“There are so many people out protesting police violence who are then met with police violence,” Nelson said. “If they didn’t understand how a Mike Brown or an Eric Garner could happen, they understand after a night of protest how a police interaction can become very violent and even deadly.”

I met Sharena Thomas, co-founder of the People’s Community Medics, as she and her children left Saturday’s rally in Oakland. Thomas told me she was compelled to start her organization, which trains volunteers how to provide emergency first aid, after participating in a committee that independently investigated the shooting death of Oscar Grant, an unarmed black man, by Bay Area Rapid Transit (BART) police in 2009. She told me she’s frustrated by the way some media outlets portray today’s mobilizations. “They just think we’re just some angry people fighting over Mike Brown and not the whole crooked justice system,” Thomas said.

Organizers in the movement are taking the “whole crooked” system as their target. So how to force a change of that magnitude? Last week, ABC News asked Tory Russell, an organizer with Hands Up United in Ferguson, for his take on the Obama administration’s plan to put more than $260 million toward funding police body cameras and training. Russell responded: “A body camera… doesn’t change the minds and the hearts of the police officers. I think we need to just remove racial bias in the system.” Mervyn Marcano of FergusonAction.com, a coalition of organizations working on police violence in Ferguson and nationwide, highlighted the importance of challenging implicit bias, or the unconscious anti-black stereotypes and fears that officers (and Americans more broadly) hold. “If you think body cameras and civilian review are going to get at these questions, you’re missing the point about how these officers walk around in our communities,” he told me.

Movement leaders working in Ferguson developed at least one demand that that goes to the heart of what Marcano and Russell describe. It calls on the Department of Justice to periodically review police departments and withhold funding from those that don’t train their officers on bias. The full list of demands, which includes calls for Congressional hearings on discriminatory practices and passage of the End Racial Profiling Act, are being used outside of Ferguson. On Monday, protestors involved in the Oakland actions pointed to them as well.

These demands are visionary, but they don’t — and perhaps can’t — address the full range of problems that the movement is laying bare. As Patrisse Cullors, one of the three creators of the #BlackLivesMatter call to action, has explained:

I think there’s obviously policy changes — you know, Michelle Alexander calls it the new Jim Crow. We would see less funding towards law enforcement. We would see more funding in black communities towards shelter and food and education. But we have to do more than that. We have to shift culture. Darren Wilson killed Mike Brown because he thought he looked like a demon. Policy is not going to shift that. Jim Crow laws are gone, but we still have Jim Crow hate.

I asked john a. powell [sic], a leading thinker on implicit bias and a law professor at U.C. Berkeley how to take on that broader fight against the devaluation of black life. “Implicit bias comes from the environment, it’s like the air we breathe,” powell said. “If you want to fix implicit bias you change the pattern. If every person we see being arrested on television is black, that is lodged in our unconscious. Policies matter a great deal. What we see on television or what we read in books, that also affects us.”

Which supports Cullors’ claim that even a piece of landmark legislation – a 21st century equivalent of the Civil Rights Act, which I suggested earlier this month – can’t on its own solve our current constellation of problems. Frank Bardacke, a writer and teacher whose 50 years of activism include involvement in the anti-war, farm worker and Berkeley student movements, agreed that because anti-black sentiment isn’t legally enshrined, today’s mobilizations are raising a more complex set of questions: “The critique today is more fundamental and would demand more fundamental changes,” he said. “If you think of the Voting Rights Act, ending Jim Crow in the South was a very specific demand that the state could accommodate. What is the comparable demand today?”

Young organizers are thinking on this question. Marcano of FergusonAction.com told me that today’s efforts are trying to finally make good on the promise of the civil rights movement and to fill in gaps left by earlier generations of organizers and activists.

“If you talk to the young folks on the street, they’re not marching for a particular concession. They’re out there because they’re frustrated and they know their lives are not valued by the political structure,” Marcano said. “We’re not, through our traditional organizations, organized to meet that conversation. There is a new and different way of lifting up all of these questions, and I think we actually have to do that if we want to do justice by the folks that are out in the street.”