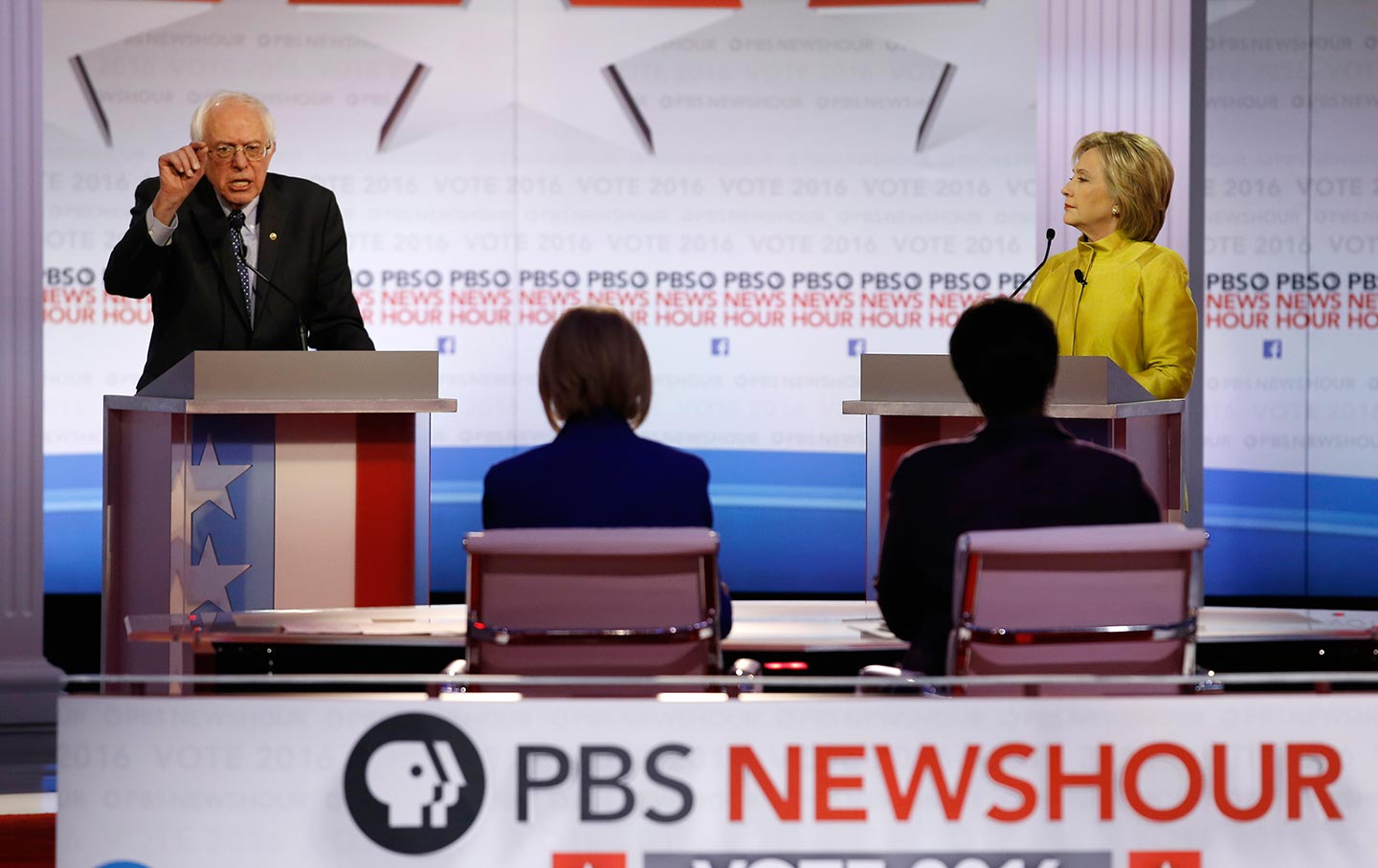 Bernie Sanders speaks during a during a Democratic presidential primary debate with Hillary Clinton at the University of Wisconsin–Milwaukee, February 11, 2016. (AP Photo / Morry Gash)

This season’s Republican debates have been characterized by an avalanche of purposeful and ideologically driven disinformation, sometimes fact-checked a day later but largely given a pass by moderators and political analysts. A recent case in point: When CBS’s John Dickerson challenged Ted Cruz’s fib regarding past Supreme Court nominees at the February 13 Republican face-off, Dickerson’s correction, not Cruz’s lie, became news. The Republican audience booed, because the facts themselves, alas, have a liberal bias, and Dickerson apologized.

Armed with hundreds of millions of dollars from funders, the right has been “working the refs” since the early ’70s.

But the debates are hardly the only place where the right has bullied the media into submission. No less important, though operating under the radar, is the framing of the issues: which ones matter and what solutions are defined as “responsible.” The Bernie Sanders campaign has fought to expand America’s ideological bandwidth, but it must battle decades of rightward drift to do so. Armed with hundreds of millions—possibly billions—of dollars from funders like Richard Mellon Scaife, John M. Olin, the Koch brothers, Sheldon Adelson, and others, the right has been “working the refs” since the early 1970s. Massive investments in media organizations, advocacy groups, think tanks, so-called “social welfare” institutions, and the like have all served to push our political discourse into ideologically friendly territory.

Central to this strategy has been a relentless attack on the press. “It’s no secret that the media is, by and large, liberal,” Ted Cruz’s campaign spokesperson recently told Politico. This accusation has achieved the status of cliché by now, despite oceans of counterevidence presented here and elsewhere. According to the story line, the most extreme examples of liberal media bias can be found at PBS and NPR, both of which have been the targets of never-ending defunding campaigns since the 1980s. “PBS Epitomizes Liberal Elite,” screamed a 2012 US News & World Report headline above an attack article by then–Heritage Foundation vice president Mike Gonzalez. Upon coming across this and so many similar stories, a genuine liberal can only sigh and say, “If only…”

“When it comes to dealing with Russia,” moderator Woodruff demanded of Sanders, “how hard are you prepared to be?”

Take a look at how right-wing memes dominated the February 11 debate that PBS moderated between Sanders and Hillary Clinton. Judy Woodruff began the evening by informing Sanders that voters were asking, “How big a role do you foresee for the federal government? It’s already spending 21 percent of the entire US economy. How much larger would government be in the lives of Americans under a Sanders presidency?” She presented no evidence to support her contention that a significant number of Democratic primary voters, or even potential general-election voters, actually care about this. And it’s hard to believe that many do. The “size” of government may excite Tea Party activists and conservative pundits, but in the real world, people concern themselves with what the government does and doesn’t do for them. (Just ask President Rand Paul.) Woodruff might have asked Sanders to justify his plans on the basis of their efficiency. For instance: Would single-payer healthcare really save people more money in healthcare payments than it would cost in higher taxes? Sanders tried to answer her this way, providing the substance Woodruff’s question lacked. But she simply doubled down, demanding, “My question is: How big would government be? Would there be any limit on the size of the role of government?”

PBS’s other moderator, Gwen Ifill, continued in the same silly vein. Her first question, to Hil­lary, complained that she too has “proposed fairly expansive ideas about government.” She recalled Bill Clinton’s announcement that “the era of big government is over” as if it had been Hillary, not Bill, who’d said it. Ifill went on: “When asked your feelings about the federal government this week, 61 percent of New Hampshire Democrats told exit pollsters that they are angry or at least dissatisfied. Given what you and Senator Sanders are proposing—an expanding government in almost every area of our lives—is it fair for Americans who fear government to fear you?” Note the rhetorical, right-wing sleight-of-hand here: How does the percentage of New Hampshire Democrats who are “angry or at least dissatisfied” with the government translate into a complaint about the size of government, much less an undefined “fear” of Hil­lary? Is it not at least equally possible that Americans are “angry” or “dissatisfied” at Congress’s refusal to address a tax code that benefits the superwealthy or to rein in the predatory practices of the big banks?

Over and over, the so-called liberals at PBS paid tribute to right-wing talking points. Asking about the issue of money in politics, Woodruff put Clinton on the defensive over the fact that she has received about $10 million “from just two wealthy financiers.” Might it have been worth mentioning here, to give viewers some context, that the vast majority of the 358 families who have donated more than $100,000 to a candidate are supporting Republicans? What of Adelson’s $150 million, or the $889 million the Koch brothers plan to raise and spend? Not a nickel of that money is going to Hillary or any other Democrat.

Foreign-policy questions were similarly skewed. Not a single one, for instance, addressed the threat of climate change. Instead, sounding like a Reagan-era Republican, Woodruff demanded of Sanders: “When it comes to dealing with Russia…how hard are you prepared to be? Are you prepared to institute further economic sanctions? Would you be prepared to move militarily if Russia moves on Eastern Europe?”

A few years ago, PBS created a right-wing media-pundit talk show hosted by Paul Gigot of The Wall Street Journal. When it failed to attract an audience, the network simply gave it to Fox. Could it be that Woodruff and Ifill had a similar model in mind? If not, perhaps next time they could turn the moderating duty over to Big Bird and Cookie Monster. It would be at least as informative, and a lot more entertaining.