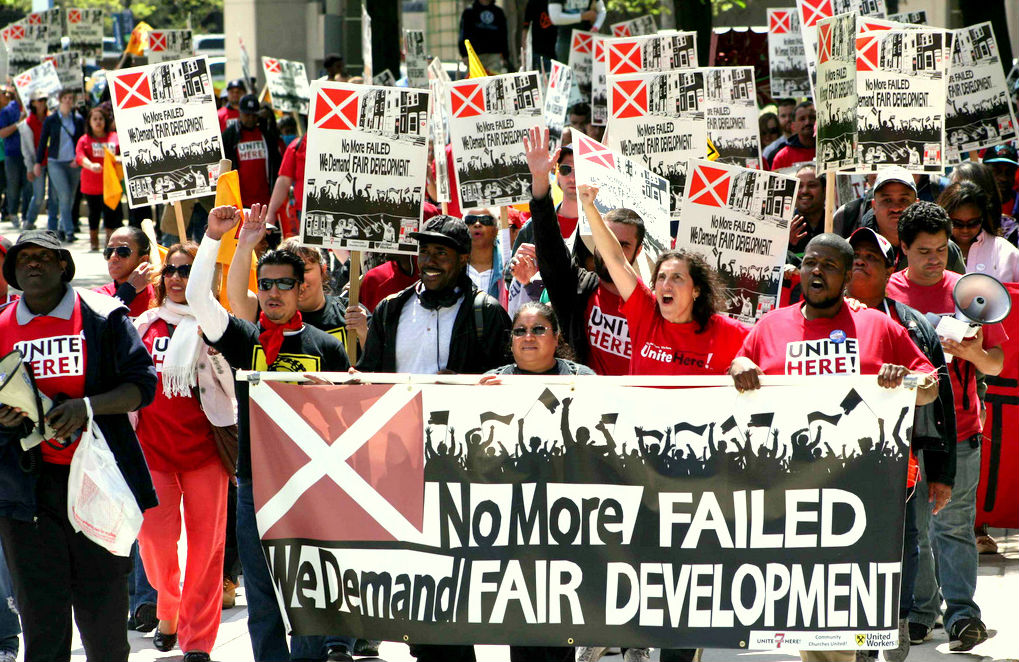 A decade ago, food service workers at Baltimore’s Thurgood Marshall International Airport were getting ready to land a union contract. But then a new developer took over the airport’s concession businesses, and their economic prospects took a nosedive. The workforce has fallen into a familiar rut of poverty wages and dead end jobs, say labor advocates, in glaring contrast to the sky-high profits raked in by their bosses and the overarching retail developer.

Yaseen Abdul-Malik spoke out at a local “Rally for Fair Development” last April about how the airport’s development model had left fast food workers like him stranded:

“It’s not fair that we work on publicly owned property, paid for by tax dollars, our tax dollars, but we are paid barely above minimum wage…. Some of us are paid so low that the only time we get a decent meal is when we are at work.”

According to a new survey published by UNITE HERE, part of an organizing campaign that the union has been pursuing since 2012 against the concession developer AIRMALL USA, the Thurgood Marshall Airport (BWI) is saddled with a “development” scheme that has dragged down the local economy.

The survey found that in the mostly black workforce, black workers were concentrated in the lowest-paying and lowest-status jobs, earning as little as $8.50 per hour. Surveyed blacks “were over six times more likely to work in fast food jobs and over three times more likely to work in back-of-the-house restaurant jobs than their white counterparts.” Whites were overrepresented in management and concentrated in more upscale jobs. While white workers dominated higher-ranked positions, like bartending, just three of the forty concessionaires were run by black-owned local businesses. (AIRMALL, meanwhile, touts its participation in a diversity program to recruit local contractors based in communities of color.)

Since the airport is “a state-owned entity” accountable to the public interest, the union argues that “[b]y providing low-wage jobs and presiding over a racial disparity in job outcome among surveyed workers, the BWI concessions program has fallen short in its obligation to the region’s African-American community and the City of Baltimore.”

According to Thomas Cafcas, an analyst with Good Jobs First, UNITE’s latest survey shows that “when government fails to regularly re-evaluate contracts with private entities and to include strong contracting standards…the results can be less than adequate from both a social and economic perspective.”

The survey was released along with an open letter signed by labor and community groups calling on the Maryland Aviation Administration to “establish programs that support racially equitable employment opportunities among BWI concessions workers” and, ultimately, with an opportunity to opt out of the contract coming in 2017, to “terminate AIRMALL USA’s contract if it cannot demonstrate sufficient progress in creating a program that has a positive impact on racial equality in the State of Maryland.”

AIRMALL counters that labor relations at BWI are not its business. A spokesperson tells The Nation via e-mail that since the company is a management firm overseeing the concessionaires, “it is those operators, ranging from national brands to locally owned businesses, (and not AIRMALL) that determine wages and benefits for their employees.” On the report’s findings on racial disparities in the workforce, AIRMALL argues, “To attempt to make this a race issue is careless and unsubstantiated.”

Although AIRMALL is technically not the boss, the union still holds the company partially responsible for labor conditions at workplaces that lease from it. UNITE Spokesperson Meghan Cohorst tells The Nation via e-mail that “given the lack of progress on that front in the ten years that AIRMALL has operated the concessions program there, it’s clear that their model isn’t working for the workers in that program.”

When AIRMALL first landed at BWI in 2004, concession workers were campaigning for a union, but were blocked when then-Governor Robert Erlich moved to restructure airport concessionaires by getting rid of the previous operating company, Maryland-based firm HMS Host. Instead of a union, the workers got AIRMALL’s developer-based tiered business structure, which made them unable to unionize under a single employer unit. Unionization drives must now be undertaken piecemeal, at individual BWI concessionaires.

Workplace justice struggles at airports have become a flashpoint for advocacy by community groups sick of over-hyped development schemes. According to research by the University of California, Berkeley’s Labor Center, nationwide airport workers have seen their wages decline over the past two decades, reflecting a wave of deregulation in the aviation industry and mass outsourcing of service jobs. And the once-solid jobs of ground-support workers like baggage handlers are now marred by high turnover, little access to union representation and diminished power to negotiate employment conditions.

But amid labor struggles against outsourcing and predatory commercial development, airports are also providing a launchpad for a fresh wave of labor mobilizing by unions and community activists.

In May, contract service workers, many of them low-income immigrants and people of color, at three New York–area airports (JFK, La Guardia and Newark), voted to join the SEIU Local 32BJ, opening the door to multi-site collective bargaining. Chicago’s O’Hare and Midway airports have seen a flurry of organizing activity, with UNITE HERE organizing concession staff and SEIU mobilizing low-wage service workers such as cabin cleaners and wheelchair attendants.

In several cities, including San Francisco, Philadelphia, SeaTac in Washington (the town surrounding the eponymous airport) and Los Angeles, policymakers have sought to lift up airport job quality through living wage and community-benefits mandates, which compel developers and government contractors to provide decent pay and benefits to local hires in exchange for the profits they reap with the support of government permits, taxpayer-funded infrastructure and public services.

The San Francisco Airport Commission launched a pioneering program in 2000 aimed at improving working conditions by enhancing wages and benefits, and strengthening through training. It was a good deal for both workers and passengers; improvements in productivity and job satisfaction followed, and turnover dropped.

At BWI, UNITE HERE says it supports any advancement toward better paying, more sustainable jobs, including pro-worker legislation. But it still aims to secure that union contract narrowly missed in 2004. Cohorst says, “While a living wage is a great first step, there are many benefits to unionization (a formalized grievance process, language defining full-time work and benefits, etc.) that wouldn’t be included otherwise.”

According to Anastasia Christman, policy analyst with the National Employment Law Project, government mandates and unionization can be complementary organizing strategies.

Even a local minimum wage hike could lay the groundwork for worker organizing, she says via email, because better pay could “give them an incentive to stay on the job, could raise their morale, and could help them to think about other ways to improve their jobs and the operation of the airport.”

Even if the unionization effort isn’t yet ready for take-off, BWI concession workers are getting a lift from fellow airport laborers nationwide, as they defy corporate developers by charting a more balanced course to economic empowerment.