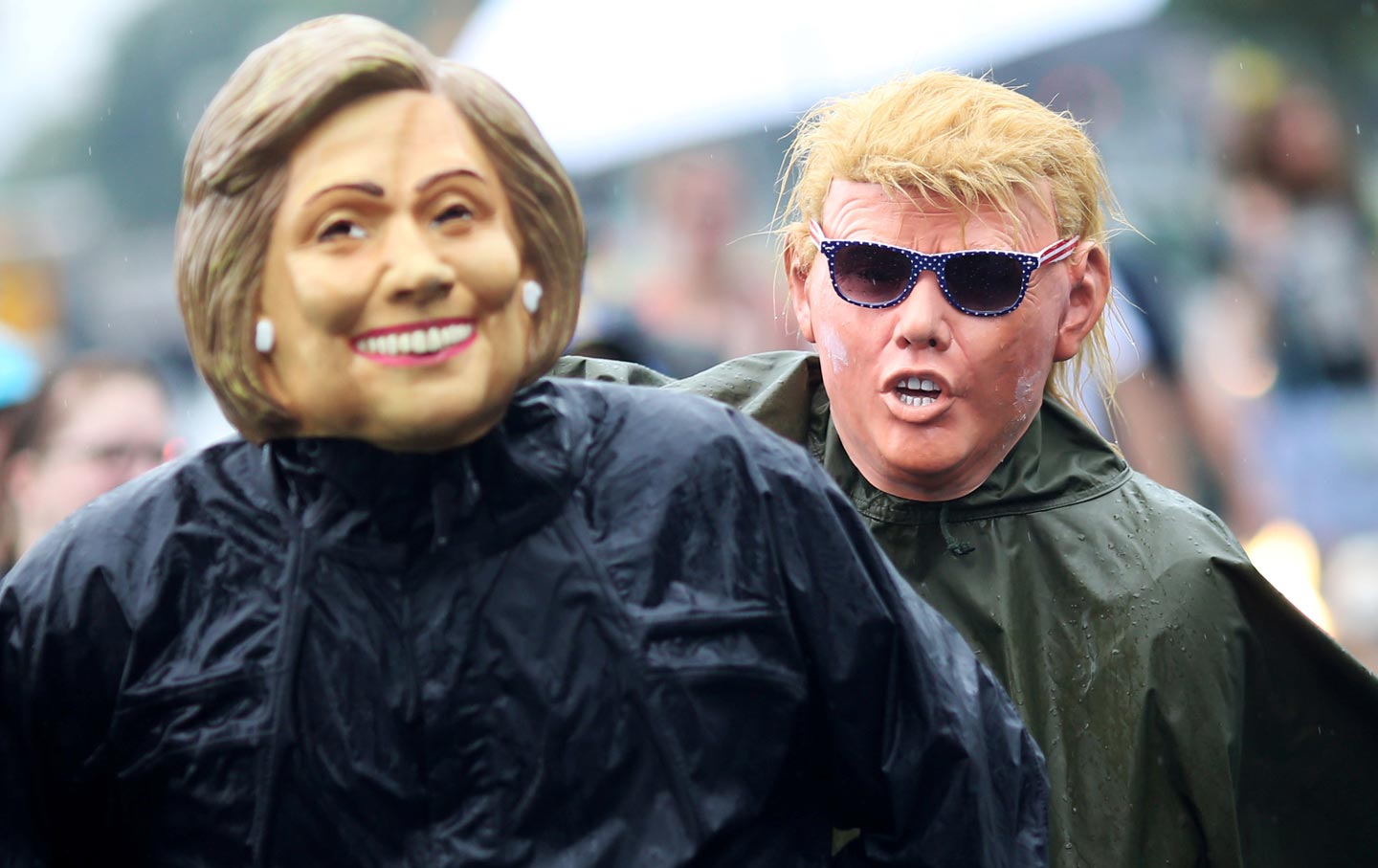 Protestors wear masks of Hillary Clinton and Donald Trump as they march toward the Wells Fargo Center on the last day of the Democratic National Convention, Philadelphia, July 28, 2016. (Reuters / Dominick Reuter)

The 2016 election season started last year with a cheap stunt. The roguish clown Donald Trump set fire to the circus tent, then made fun of the fleeing performers. Many of us laughed in a sick sort of way, enjoying the Republican distress.

Now the nation has reached the final act—the election itself—and it’s not funny. We are watching a dark opera with exaggerated characters. Hillary Clinton is cast as Lady Macbeth, with bloody hands and a sinister laugh. Donald Trump is the hateful con artist on the street corner, selling poisonous drugs to TV-addicted citizens. Customers know Trump’s hate-tinged elixir is probably bad for them, but it makes them feel good.

The suspense is terrifying, but the ratings are off the charts. Because the chaos of 2016 is like watching the great national train wreck about to happen, and there’s no way out. People want to look away but they keep watching with helpless fascination. There’s a sick feeling that the country probably loses, whichever character wins.

In his feral cunning, Trump knew that both parties were fraudulent institutions.

Whom should we blame? Obviously Donald Trump, many people would say, but I think that’s way too easy. Trump took down the Republican Party and threatens to do the same with the Democrats because, in his feral cunning, he knew that both parties were fraudulent institutions. Trump would say “stupid.”

He demolished the Grand Old Party while he hijacked the fading working-class credentials of the Democratic Party. He succeeded in this by demonstrating that both parties are out of touch and distant from the very people they claimed to represent.

This was forcefully demonstrated, not by Trump himself, but by their confused reaction to him. Republicans didn’t see it coming, though they had plenty of warnings that rebellion was threatened. Until very recently, Democrats assumed Trump the clown would be their asset, guaranteeing heavy turnout to make sure Trump loses (there’s less talk now of a sure bet).

Citizens left, right, and center have been giving up on electoral politics and the two-party system for decades.

The confusion and hollowness of both political parties has not been a secret. Citizens left, right, and center have been giving up on electoral politics and the two-party system for decades. The nation’s largest political party is the “don’t bother” party—roughly half of the adult population who see no reason to vote, and nothing in it for them. Instead of scolding them, an active political party might look into the cause-and-effect of dysfunctional democracy and try to change it.

Both Democrats and Republicans took the easy way out in modern politics and accepted the gilded cage of the money-drenched political system. There are no longer real political parties composed of active members and layers of local and national organizations that vet candidates, debate policy issues, and ask grassroots citizens what they think. As I wrote many years ago, the Democratic Party is now simply a mail drop for political money. Likewise for Republicans, except the Republicans are more business-like in harvesting corporate money, fulfilling their instructions.

Democracy, you could say, is now professionalized. It offers interesting careers and often-lucrative jobs to those with the professional skills of managers, pollsters, fundraisers, creative artists, and writers. This professionalized politics is enormously expensive and naturally makes officeholders more dependent upon the private money sources eager to help in exchange for political rewards. Thanks to the Supreme Court, those self-interested money spigots are more powerful than ever before.

In our money-drenched politics, both parties have far less incentive to invest in recruiting new voters.

The most pernicious effect of money-drenched politics is that both parties have far less incentive to invest in recruiting new voters with unknown needs and opinions. It’s very costly, and the payoff is less reliable. The Republican Party invests heavily in keeping certain citizens from voting—namely, African Americans and poor people. Democrats concentrate on “likely voters” but don’t invest in the riskier challenge of expanding the electorate.

Yet here is the great heresy of 2016: Donald Trump managed to wipe out his Republican rivals and win the Republican nomination by persuading millions of alienated Americans to get back in the game and vote for him. What’s more, Trump didn’t have to pay for these new voters. He mobilized their anger and awakened their hopes by speaking aggressively to their injuries and anxieties and, yes, for some their prejudices.

The leaders of both parties may be betting that the Trump upheaval will be defeated in November, then lose energy and fade away afterward, so politics can get back to “normal.” For lots of reasons, I think this is delusional. Regardless of who wins this year and what happens to Trump, the political instability will continue because it reflects seismic shifts under way in the American condition.

We are seeing the first wave of raucous rebellion this year. I think we will see many more of them, generated by left and right or independent free spirits. In different ways, Trump and Bernie Sanders have shown citizens how it can be done; that is, how they can organize their own political presence with straight talk and low-budget campaigns, financed by small contributions in Bernie’s case (Donald, of course, mostly used his own money). This is a way to defeat the money system, or at least drive it into a corner. Bernie took the high road, while Donald is still on the low road. Bernie and Donald both staged compelling dramas: the underdog citizens challenging established power in the belief that “organized people” can defeat “organized money.”

Thanks to new social technologies, ordinary people now have a low-cost system of communications they can use to create their own self-directed power base—spreading the word on their advanced political demands and picking challengers to change the stripes of an existing party or break it up.

American history tells us that such irregular disruptions are often the first stage of fundamental political upheaval and change. Of course, it may not last. The first wave of small-d democratic agitators are typically diverted or crushed. All of the great reform movements went through stages of hope and rejection before they fulfilled their radical objectives. Some economic and social reforms are still waiting for what other countries achieved generations ago.

But I believe something deeper than the standard sideshow is unfolding in 2016. I see the nation at a profound turning point, confused and conflicted in ways that cannot be resolved by one election or even several. Noam Chomsky has suggested that Trump can be seen more as a symptom of the deeper disorder than its cause.

“The state-corporate programs of the past 35 or so years have had devastating effects on the majority of the population, with stagnation, decline and sharply enhanced inequality being the most direct outcomes,” Chomsky said in an interview with Truthout. “Trump is appealing to those who sense and experience the breakdown of American society—to deep feelings of anger, fear, frustration, hopelessness.”

My own hunch is that our country is fast approaching the end of an era—the mostly triumphant half-century when American power and prosperity prevailed in world affairs, when Washington worked to reorganize other nations in America’s image. That era began with our epic victory in World War II and the US leadership in restoring nations and economies.

After the Cold War rivalry ended, with the Soviet Union’s collapse, triumphant America became the lone surviving superpower, championing the globalization of capitalism while trying to keep the peace by thinly dispersing US troops on virtually every continent. Vigilant America is permanently on the lookout for other wars to fight.

America is now in the precarious zone where its utopian ambitions to run the world begin to resemble the classic overreach of failing empires. Other nations have figured out how to evade Washington’s scolding and bullying and to prosper on their own economic plans. Bewildered Americans, meanwhile, find their country fighting endless wars in other people’s neighborhoods, no peace in sight, while bridges are falling down back home.

I read the chaos of 2016 as the first rumblings of people rising to break up the status quo and forging a new deal.

Strangely enough, while others feel despair at the political chaos, I am experiencing the faint flutter of optimism. Not for the 2016 election and certainly not for Trump, but rather for long run. I know American history well enough to know the nation does not advance without a bruising battle against long, often torturous resistance.

I am feeling hopeful because I read the chaos of 2016 as the start of something big, the first rumblings of people rising to break up the status quo and forging a new deal. This election won’t do that. Neither party is trustworthy. But I sense an opening.

In my last book, Come Home, America, I compared the democratic power of ordinary citizens to an underground river that runs along unseen and ignored for many years until one day, for whatever reasons, their impulse for democracy surges up and breaks through the surface of political affairs and effectively changes everything.

This is a wishful notion, I admit, but the chaos of 2016 tells me we may be at one of those rare moments when people figure out how to make themselves heard and then set out to change everything.