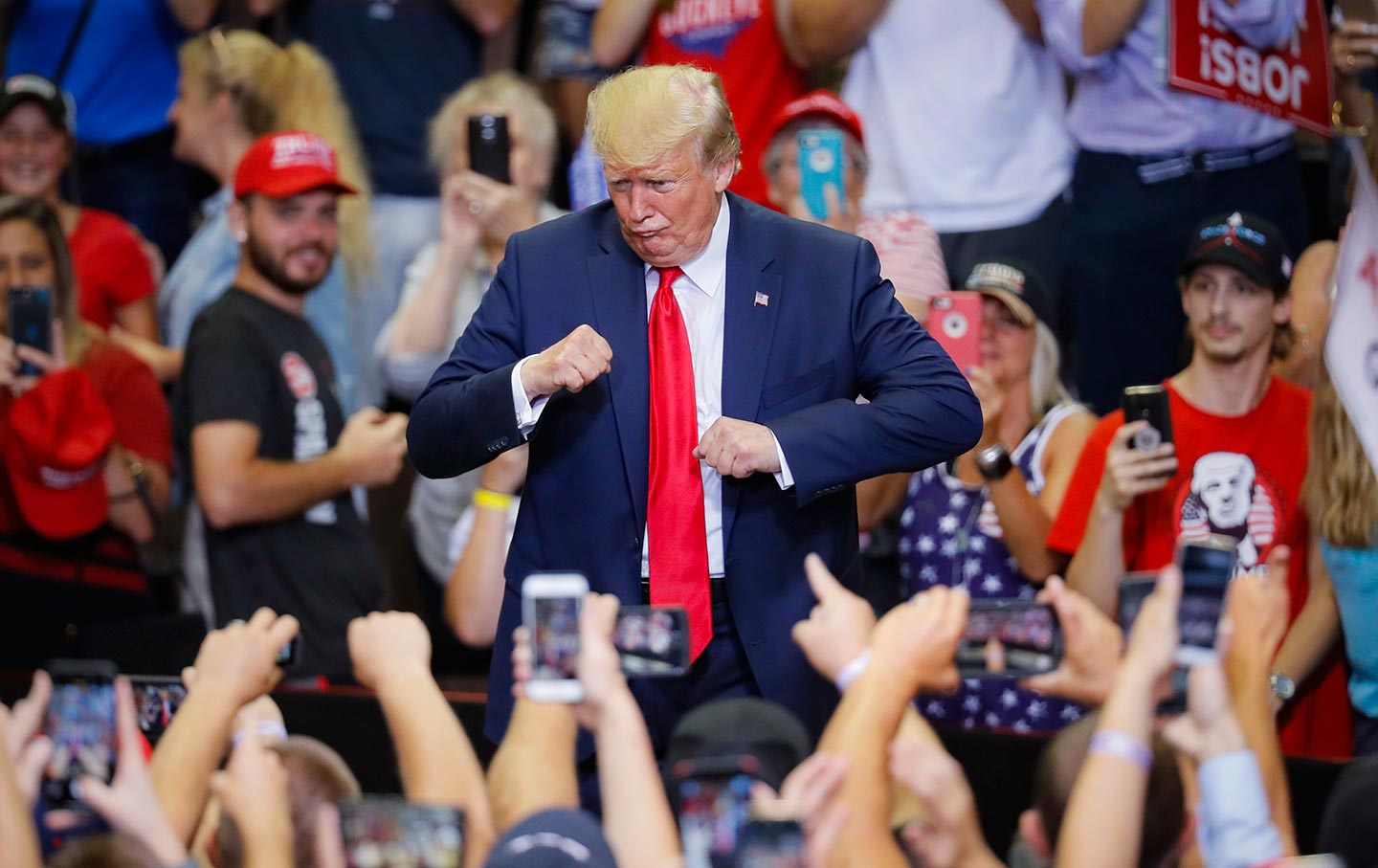 The shift in public opinion regarding the impeachment of Donald Trump reveals that Democrats are frequently worried about the wrong white people. In the last two months, the mainstream media has trumpeted polling showing that the majority of Americans now support impeachment, and a deeper dive into the data shows that it’s white people in particular who have shifted their views—coming around to a position people of color have had for a long time. Looking at which white people have changed their minds offers insights and a cautionary tale to Democratic leaders seeking to make inroads with those who previously supported this president.

The polling data couldn’t make it more clear that the white people who are finally moving away from supporting Trump are college-educated—not the working-class whites that many Democrats and reporters obsess over. (Pollsters and journalists often use “working-class” and “non–college educated” interchangeably.) In August, support among all whites for impeachment and removal of the president stood at 27 percent in a Monmouth University poll. After the first whistle-blower filed a complaint in August about Trump’s phone call with Ukrainian president Volodymyr Zelensky, the impeachment inquiry was launched in late September, and the White House released the partial transcript of the Zelensky call, public opinion turned.

By the end of September, overall white support for impeachment had risen to 34 percent in that month’s Monmouth poll. Nearly all of that change, however, came from college-educated whites whose enthusiasm for ending the Trump presidency rose by 70 percent—jumping from 26 percent supporting it to 44 percent. For whites with no college degree, however, allegiance to Trump stayed strong, and support for impeachment barely budged, with a small uptick of 2 percent.

In Repairing Its Image, the DCCC Has Only Scratched the Surface

This steadfast loyalty to Trump has significant strategic implications. First, since non-college-educated white Americans will be the last to leave the Trump ship of state, it is foolhardy to spend significant time, money, and attention trying to change their minds. Ever since Trump’s election, many in the progressive movement have obsessed over finding ways to “win back” the white working class. The magazine The American Prospect devoted an entire issue to chasing this great white whale (pun intended). Illinois Representative Cheri Bustos rode to leadership of the campaign arm of the House Democrats on the promise of focusing attention and resources on white voters in the “heartland.” Democrat-aligned super PACs such as Priorities USA are spending hundreds of thousands—if not millions—of dollars running ads targeting the voters least likely to be receptive. If conservative, white, working-class voters are sticking with Trump even after his corruption has been laid bare by this impeachment process, they’re not going to be swayed by slick ads attacking the administration’s pro-billionaire tax policies.

Given the pearl-clutching that comes when people point out the intractable nature of these views, it bears repeating that progressives should nonetheless champion a public policy agenda that benefits all members of the working class, including those who hated President Obama and love Trump, as well as his policies that cage children, deport innocent people, and aim to make America whiter. That’s the lesson of Obamacare: Despite the widespread fears and right-wing distortions to the contrary, Obama didn’t propose health insurance just to benefit people of color. His public policies sought to improve the lives of working-class whites as well, whether they wanted it or not.

If we want to expand a political coalition, we don’t start with those least likely to join the cause. What the impeachment polls show is that the most potential for expanding white support lies with those college-educated whites who, to this point, have found ways to rationalize, minimize, and excuse Trump’s conduct and destructive policies. Some sector of this demographic does still believe in this country’s democratic institutions and the principles of patriotism that they grew up embracing. What the developments of the past couple months show is that emphasizing the core concept of “country over party” does have some persuasive value—there is, in fact, some behavior by this president that is just a bridge too far.

There is deep irony, if not poetic justice, in the fact that it is patriotism that is now uniting the country across partisan and racial divisions. For decades, if not centuries, the popular perception has been that people of color, in their quest for justice and equality, were only concerned about their own “special interests” and not the broader good of the country as a whole. But as Nikole Hannah-Jones highlighted in her seminal work on The New York Times’ 1619 Project, people of color are actually the most patriotic people of all. Speaking of African Americans, Hannah-Jones wrote, “More than any other group in this country’s history, we have served, generation after generation, in an overlooked but vital role: It is we who have been the perfecters of this democracy.”

It is no accident that this reclamation of American values called impeachment has been led by the nation’s elected leaders of color—people such as Texas Representative Al Green of Houston, who introduced articles of impeachment in 2017; California Representative Maxine Waters, who publicly proclaimed two years ago that this president should be impeached; and Michigan Representative Rashida Tlaib, who famously declared back in January, “We’re going to impeach the MF-er.” The late Elijah Cummings, chairman of the House Oversight and Reform Committee, was literally signing impeachment-related subpoenas on his deathbed.

The majority of people of color have long supported impeaching this president because they have been clear-eyed from the beginning about the threat that he represents to the best of what America aspires to and should be. Now that the curtain has been pulled back by the most diverse Congress in history, many more college-educated whites have come to see the appalling corruption and contempt for the American ideal unfolding in the Oval Office. Maybe their relative economic security makes them less susceptible to race-baiting and fear-mongering, but whatever the reason for their change of heart, understanding and building on common values is the most promising path for progressives to expand their support among white voters.