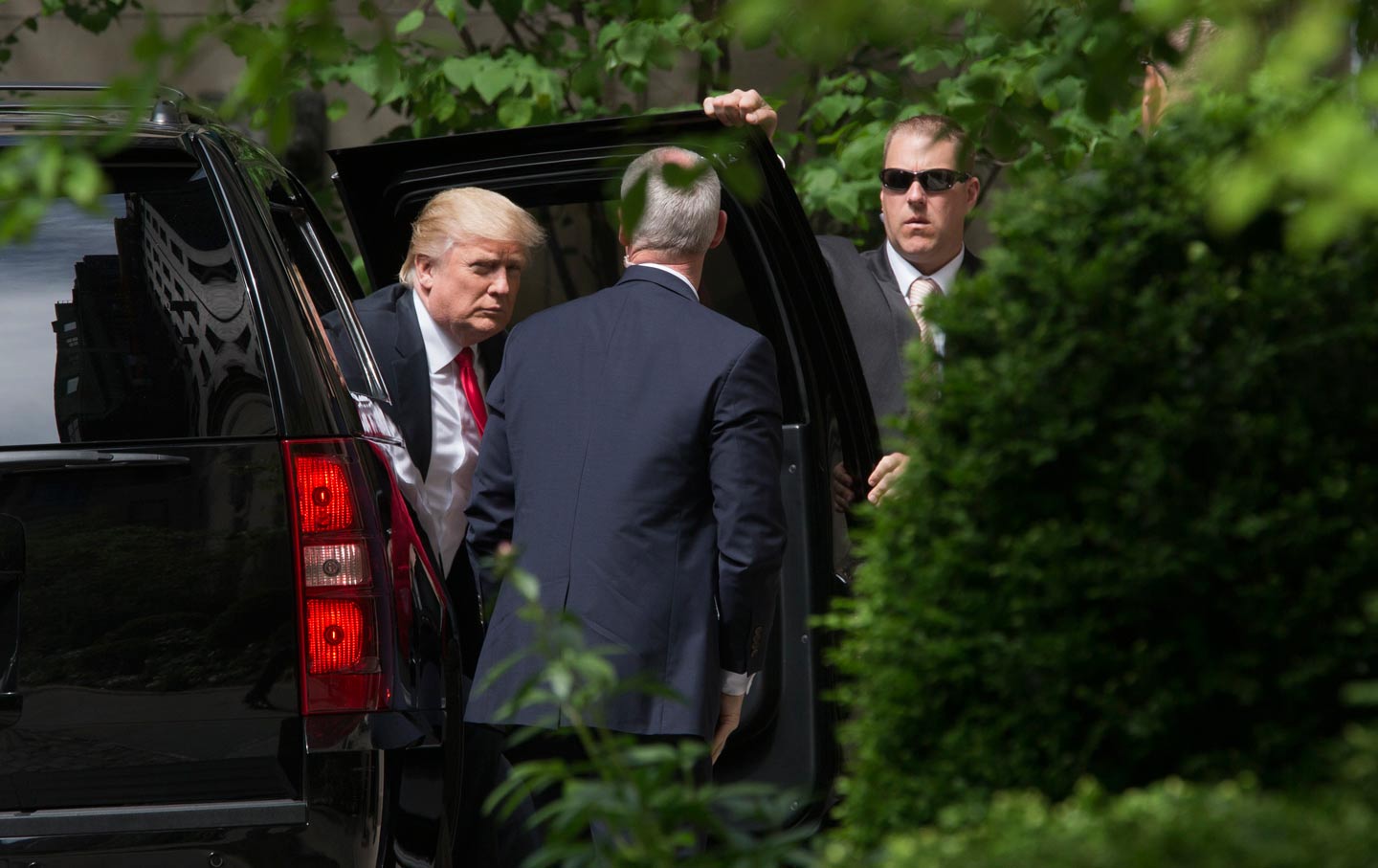 Donald Trump arrives at the residence of Henry Kissinger on Wednesday, May 18, 2016, in New York. (AP Photo / Mary Altaffer)

I’m starting to feel a little bit like Jeffrey Tambor, who in this 1981 scene tells Barney Miller that it all leads back to Henry Kissinger and the Trilateral Commission. “The whole master plan is exposed…. Henry Kissinger, have you heard of him?” Nation readers have been hearing a lot about the 92-year-old Kissinger lately. First Hillary Clinton cited his approval as a recommendation for the Oval Office; which Bernie Sanders then jumped on to criticize Clinton’s interventionism; then, just last week, Barack Obama’s Pentagon presented Kissinger with a high honor. Now, news comes that Donald Trump, the presumptive Republican nominee, has met with Kissinger. Details about what they talked about are as of yet unknown. Yet as Tambor tells Barney Miller: “No matter who wins in November, they have their man in the White House!”

Kissinger has long had his man in the White House, a fact that is less testament to his influence than to his ability to accommodate to every right-wing lurch. In the 1960s, as a rising defense intellectual, Kissinger was a Nelson Rockefeller man, firmly entrenched in the center-right establishment. When he attended the infamous 1964 Republican convention in San Francisco, he was horrified by Goldwater supporters, whom he likened to fascists. Four years later, according to journalists Marvin and Bernard Kalb, he “wept” when Nixon won the Republican nomination. “Richard Nixon is the most dangerous, of all the men running, to have as president,” Kissinger said; “That man Nixon is not fit to be president.”

Then he called the Nixon campaign to offer his services.

Next came Ronald Reagan, whom Kissinger thought “shallow” and ignorant. It was, Kissinger told Nixon, “inconceivable” that Reagan might become president. When he did, Kissinger lobbied for a job. He didn’t get an official one, but used his prominence to defend Reagan’s remilitarization of the third world. As chair of Reagan’s Central American commission, he justified the death squads and Contras. Perhaps more consequential, as a pundit, he cheer led Reagan’s 1986 air strike on Libya, taken in response to Libya’s involvement in the bombing of a Berlin nightclub, which killed two US soldiers and one Turkish civilian. US planes hit a number of residential buildings, killing an estimated 15 civilians. Muammar Qaddafi’s daughter was also reportedly killed. The Reagan administration said its strike was “measured” and “proportionate” to Libya’s crime, citing article 51 of the United Nations charter, which grants nations the right to “self-defense.” This was, to say the least, a generous interpretation of that article, which most legal scholars at the time disagreed with.

Kissinger rushed to the Reagan White House’s defense. He appeared on ABC’s Good Morning America to voice his “total support” of the raid. Attacking Libya, he said, was “correct” and “necessary.” Asked if he was worried about a backlash—increased radicalization, reprisals, or a boost to Qaddafi’s stature—Kissinger said the bombing would “reduce the incidents of terrorism,” a woefully wrong prediction but nonetheless good example of the kind of logic that put the United States on the road to its current disaster in the Middle East. A case can be made that the invocation of article 51 in 1986 was both a vindication of the logic of Kissinger’s secret bombing of Cambodia (which Kissinger often justified as self-defense) and a preview of the 2001 Authorization to Use Military Force, which sanctioned not just the invasions of Afghanistan and Iraq but the ongoing open-ended “Global War on Terrorism.” Today, there’s no part of the earth where the United States cannot be said to be acting in self-defense.

Kissinger, who is often described as valuing gentlemanly cabinet diplomacy, was also asked what he thought of Reagan’s calling Qaddafi a “mad dog.” “President Reagan has,” Kissinger said, “his own exuberant way of communicating with the American public.” (No doubt what Kissinger will be saying about President Trump). “Sixty percent of the public agrees with” Reagan, Kissinger, now the populist, noted. (Read all about how Kissinger plumped for Reagan on the Libya bombing in my recently published Kissinger’s Shadow.

After Reagan came the neocons, men like Dick Cheney and Donald Rumsfeld (whom he called the “rottenest person” in “government”). Kissinger supported every one of their wars, from Panama to the 2003 invasion of Iraq. In 2008, Kissinger, an advisor to John McCain, even gave cover to Sarah Palin. Asked by Fox News to comment on her foreign policy inexperience, Kissinger said that “you can also say that Harry Truman had no experience in foreign policy when he became president, and he turned out one of our great foreign policy presidents.”

McCain and Palin lost that election, but Trump is as much Kissinger’s legacy as he is Palin’s revenge. The press, in speculating about what the two men discussed in their summit, will play up the differences between Trump and Kissinger. NATO! China! But behind the labels—Trump the “isolationist” and Kissinger the “internationalist”—both are philosophers of crackpot realism.

“Toughness” and “credibility” are leitmotifs that run through both Trumpian and Kissingerian deal-making. Both men insist that war and diplomacy are inseparable and that, to be effective, diplomats need to be able to wield threats and offer incentives in equal, unrestricted, measure. When Trump today says, “We don’t plan on using or want to use nukes, but, we take nothing off the table,” he is effectively restating the policy position that made Henry Kissinger, a proponent of “limited nuclear war,” well known as an academic in the late 1950s.

And when Trump says that “we have to be unpredictable” in the realm of foreign policy, he is also channeling Kissinger, who has long insisted that statesmen needed to act in an innovative manner, not bound by rules or routine. That’s why he and Nixon started bombing Cambodia in 1969, to send a send a message to Hanoi that Nixon was a “madman,” that he might do anything to win the war. “I won’t tell them where and I won’t tell them how,” Trump today says of how he plans to attack ISIS; “we must as a nation be more unpredictable.” That’s absolute Kissinger.

Trump is Kissinger’s shadow. His very protean nature, his ability to shape-shift according to the needs of the moment, and to the requirements of the deal to be struck, is a close-to-perfect manifestation of Kissinger’s ideal “great leader”: a statesman who refuses to be “paralyzed” by the past or held captive to an overabundance of facts, who acts on hunches and intuition and thrives on “perpetual creation, on a constant redefinition of goals.” It is the responsibility of true leaders, Kissinger wrote in 1954, “not only to maintain the perfection of order but to have the strength to contemplate chaos, there to find material for fresh creation.”

Material for fresh creation sounds a lot like Donald Trump, who having conquered reality TV now sets his sights on the White House. “There are two kinds of realists,” Kissinger said in 1961, “those who manipulate facts and those who create them. The West requires nothing so much as men able to create their own reality.” More than 60 years later, he might just get his wish.