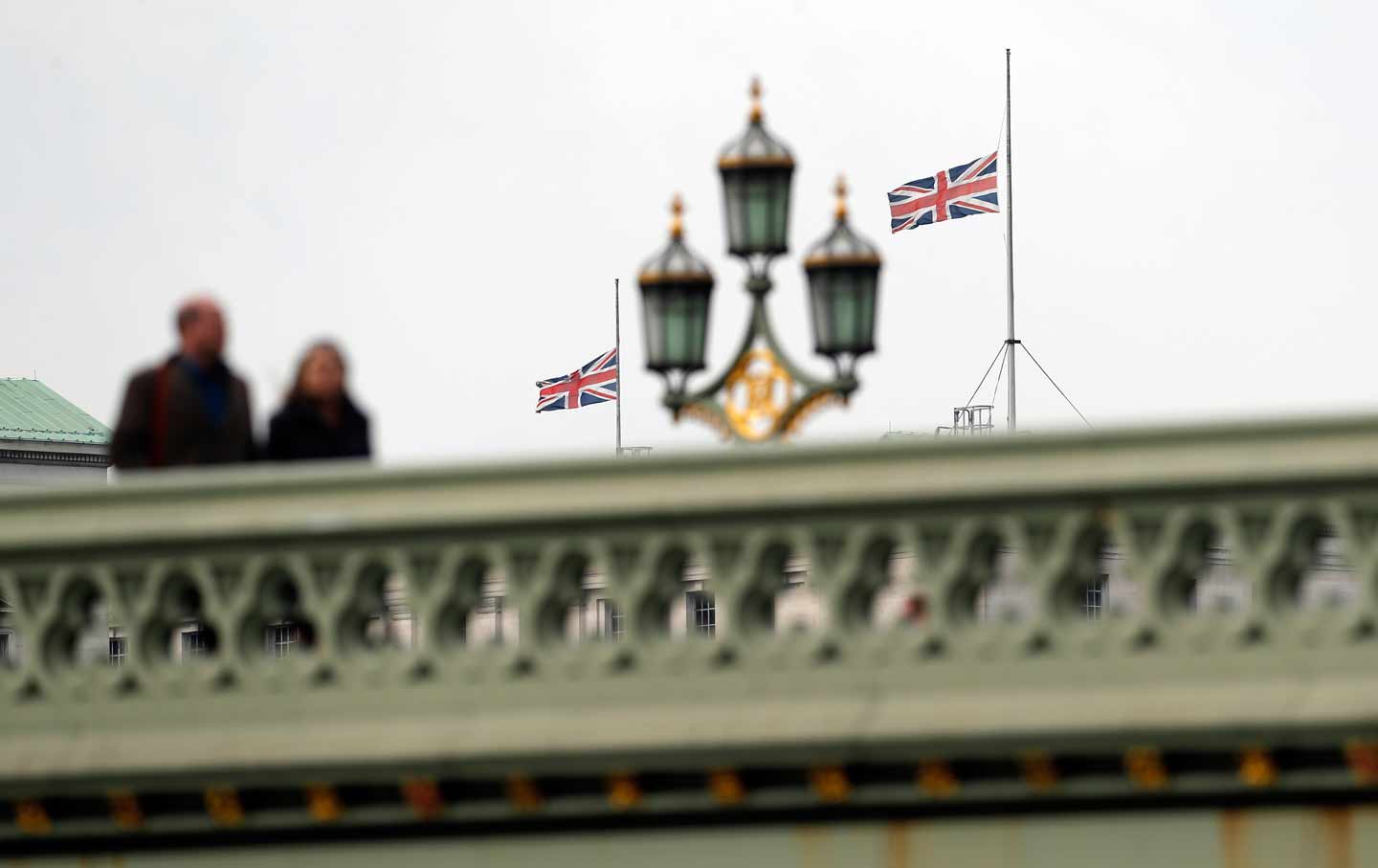 Union flags are flown at half-mast from government buildings, in front of Westminster Bridge the day after the attack in London. (Reuters / Darren Staples)

The first I heard about the attack here was an e-mail from my son’s school yesterday afternoon informing parents that “there has been a security incident at the Houses of Parliament” but that “Pupils and Staff are all safe.” His school is literally next door to Westminster Abbey, about two blocks from Big Ben. So I was enormously relieved, and touched, to get a text from the boy himself just five minutes later, assuring me he was indeed safe—and had been locked inside the science building during the incident. It was less reassuring when he reminded me that if the attack had taken place just a bit later in the day he and his friends could easily have been crossing Parliament Square when the attacker’s Hyundai turned into the square on its murderous route from Westminster Bridge to Parliament. The Westminster underground station—my son’s route to and from school every day—was still closed this morning.

So yes, the attack shook me. That’s the point of terrorism—to terrify. And as London Mayor Sadiq Khan pointed out last September, when a bomb went off during his visit to New York City, all of us who live in big cities now live with the threat of such attacks. It is the job of our leaders, Khan said, “to make sure that we are as safe as we can be.”

That threat can never be entirely eliminated. When we moved here way back in the 1990s I was haunted by Dutch Shea, the title character in a novel by John Gregory Dunne, whose daughter is killed by an IRA bomb while on a visit to London with her mother. How awful, I thought then, to be the victim of someone else’s quarrel.

Because if you’re an American, and lucky, it’s almost always someone else’s quarrel. Ireland, South Africa, Angola, Chile, Israel, Palestine, Iran, Iraq, Syria, Yemen—other people’s wars. Or as the British often say, “Nothing to do with me, mate.” Only they don’t tend to say it about wars. Or terrorism. The reasons for that are historical, and complicated. But they were thrown into relief this week with the death of Martin McGuinness, the former IRA commander who made peace with his enemies, serving with the fiercest of them, Ian Paisley, as joint leaders of the Northern Ireland Assembly.

Forgiveness can’t be coerced, and Norman Tebbit, the minister in Margaret Thatcher’s government whose wife was left paralyzed by the IRA’s bombing of the Grand Hotel in Brighton in 1984, undoubtedly spoke for many here when he said he hoped the Irishman’s soul was now “parked in a particularly hot and unpleasant corner of hell.” But Prime Minister Theresa May spoke for many more when she paid tribute to McGuinness, whom she said “played a defining role in leading the republican movement away from violence.” Tony Blair said all of those involved in negotiating the Good Friday Agreement “know we could never have done it without Martin’s leadership, courage and quiet insistence that the past should not define the future.” Which didn’t keep social media from lighting up with fury at anyone who dared to compare McGuinness to the sainted Nelson Mandela—another man labeled a “terrorist” in his time.

Terrorism is a weapon of the weak, just as drones and bombers are weapons of the powerful. So no, my personal quarrel isn’t with the London attacker—though anyone deranged enough to deliberately mow down innocent school children gets neither sympathy nor empathy from me. Once my son was safely home I’d have been only too happy to join the ranks of the fortunate bystanders—along with New Yorkers who were uptown on 9/11, Parisians who were safe at home during the Bataclan attacks, or gay people in Orlando who didn’t go clubbing the night of the Pulse massacre. For the victims and their loved ones, life will never be the same. For the rest of us, well, there were 39 victims of gun violence in the United States yesterday, though nobody broke into the news to tell you that.

And if using the bodies of the dead as a podium for political point scoring strikes you as depraved, I agree. Which is why I have a message for Donald Trump Jr., who did exactly that yesterday: Why don’t you shut your fucking mouth?

While London was still on high alert, and members of Parliament remained locked in their offices, Junior decided to weigh in with a Twitter attack on our mayor for his remarks—last September! Taking time out from the ski slopes in Aspen, Junior followed up with two more tweets, one retweeting a false rumor (Fake News!) about the name of the perpetrator, whose identity the police here are still keeping secret in order not to hinder their investigation; the other clearly aimed at whipping up hatred of Muslims.

That isn’t how we roll in London, Jr. Our mayor, Sadiq Khan—the Muslim son of a bus driver—was voted into office by Londoners of all races, all religions. While you were using your tiny mind (and if you take after your father, your tiny fingers) to spread fear, he was working to keep all of us safe. So stick to the powder, punk. You may be your “own kind of Trump.” But yesterday you showed the world you’re still a chump. And I say the hell with you.