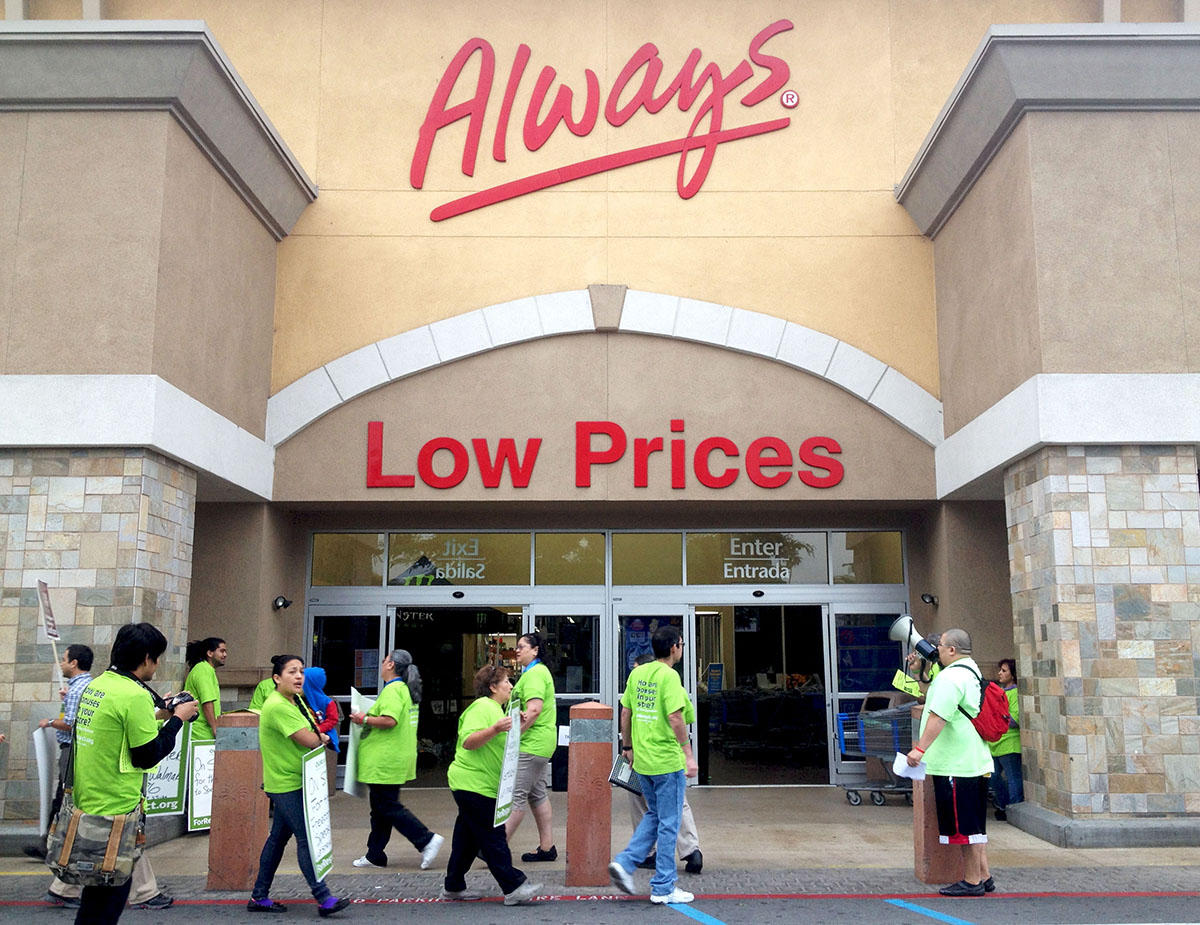 Remember when Walmart got panned for running a Thanksgiving food drive for its own employees—overlooking the irony of demonstrating noblesse oblige by asking customers to subsidize the workers the company itself impoverished? The retail giant took a more strategic approach last week when rolling out its latest do-gooder scheme: raising its base wage incrementally to $10 an hour. The move was widely praised even by labor groups—for lifting wages slightly closer to… well, what it should have been paying workers all along.

Still, the announced raise, to a $9 minimum, then rising to $10 an hour by early next year, isn’t chump change: for many, it means earning perhaps $1 or $2 more per hour, which, spread across an estimated half million workers, may generate a not-insignificant economic stimulus. Moreover, Walmart promises to offer more stable scheduling and boost some managers’ starting pay, as well—all measures that respond partially to the longstanding demands workers nationwide have aired in protests, petitions and lawsuits.

Some predict Walmart’s move could eventually raise the floor for the entire labor force, because the company controls a tremendous retail market share and helps set standards for pay scales across the supply chain, from shelf stockers to truck drivers. Though this market influence has been blamed for depressing wages, an uptick in Walmart’s base wage may theoretically encourage competitors to match its more favorable offerings on the labor market. That’s the business narrative painted by CEO Doug McMillon when he told CBS that Walmart’s motive was to “provide a great customer experience” and ensure that workers understood “how much we value them.”

But even with the raise, Walmart would still seem to peg the value of its workers at less than a living wage. The lowest-paid employees rely on billions in public benefits each year, including masses of food stamps, to scrape by. According to one recent analysis based on federal estimates, “a single Walmart Supercenter cost taxpayers between… $3,015 and $5,815 on average for each of 300 workers.” If a part-time associate is working 1,000 hours a year—roughly half its workers are part-timers—the extra dollar an hour still might not make her financially self-sufficient, much less lift her family out of poverty.

And since Walmart apparently has no plans to significantly expand full-time positions, thousands may continue to lack the working hours they need to approach a sustainable income.

Walmart associates are further devalued by the company’s longstanding pattern of suppressing workplace organizing efforts and imposing unstable schedules, which often interfere with workers’ family caregiving or school responsibilities and especially impact working women. In addition, Walmart devalues workers further through its vastly unequal corporate hierarchy: according to Demos, the ratio of CEO-to-worker earnings has more than doubled in recent years, to about $300 in CEO compensation for every meager dollar earned by a wage worker.

Besides, the modest wage hike still barely offsets the lag between associates’ earnings and shareholder gains in recent years. While wages have barely kept pace with inflation, during the “recovery” since 2007, Walmart has seen a 22 percent rise in profits per worker, according to The New York Times.

What would a fairer raise at Walmart look like? Workers have proposed their own simple—and surprisingly feasible—demand: $15 an hour, and full-time jobs. According to an analysis by the think tank Demos, Walmart could already afford this measure simply by redirecting about $6.6 billion away from its current practice of repurchasing its own shares—a tactic to artificially boost shareholders’ income—and boosting workers’ pay instead. This measure “could give its 825,000 low-wage employees a raise of $5.13 per hour, boosting productivity and sales.”

The virtuous circle could be widened by ratcheting up pay scales across the retail workforce. Demos estimates that if retailers with 1,000 or more workers set a basic annual income of $25,000, nearly six million workers, most of them women, would get a major boost—resulting in a 27 percent raise for a typical low-wage woman worker.

So Walmart’s raise deserves some praise, but it represents a fraction of what the company could already afford to pay, if it only slightly shifted some investments from the executive suite to the checkout line.

Demos analyst Catherine Ruetschlin tells The Nation via e-mail that Walmart’s chief competitors, ultra-cheap dollar stores, might decide to double down on poverty wages to fill the bottom rung of the market that Walmart previously occupied. So unless economic conditions drastically improve for all workers (and Walmart’s new wage hike won’t cut it), there will always be impoverished families with householders forced to work for less.

“Since the base of households struggling to make ends meet will persist even after Walmart’s raise, it’s unlikely those stores will change their model, which is really too bad,” Ruetschlin says. Walmart might argue its business will benefit from higher pay, but cheaper rivals might opt to keep banking on the low-wage, low-price economy. Amid a weak labor market, Ruetschlin says, “There may remain a market for buying cheap goods from unhappy employees.”

One thing that could actually improve pay across the board would be a boost in the legal minimum wage—and many communities are pushing for higher mandatory wage floors that no one can undercut without breaking the law.

And upward pressure on wages can come from workers who organize to reject poverty wages and demand better working conditions. Following Walmart’s announcement, the advocacy group OUR Walmart reminded workers and the public that activists should take this initial raise as a down payment on what they are truly owed:

Walmart associates deserve enough hours each week to make ends meet and enough per hour to keep a roof over our heads. That means $15 an hour, full-time, consistent hours, and respect for our hard work.

As it squares off with aggrieved workers, Walmart may have sought to move the goalpost with a modest concession. But the measure ought to spur labor activists to up their game. When Walmart finally grants them the labor conditions and just compensation they deserve, workers should rightly take the credit for keeping the pressure on the retail giant.