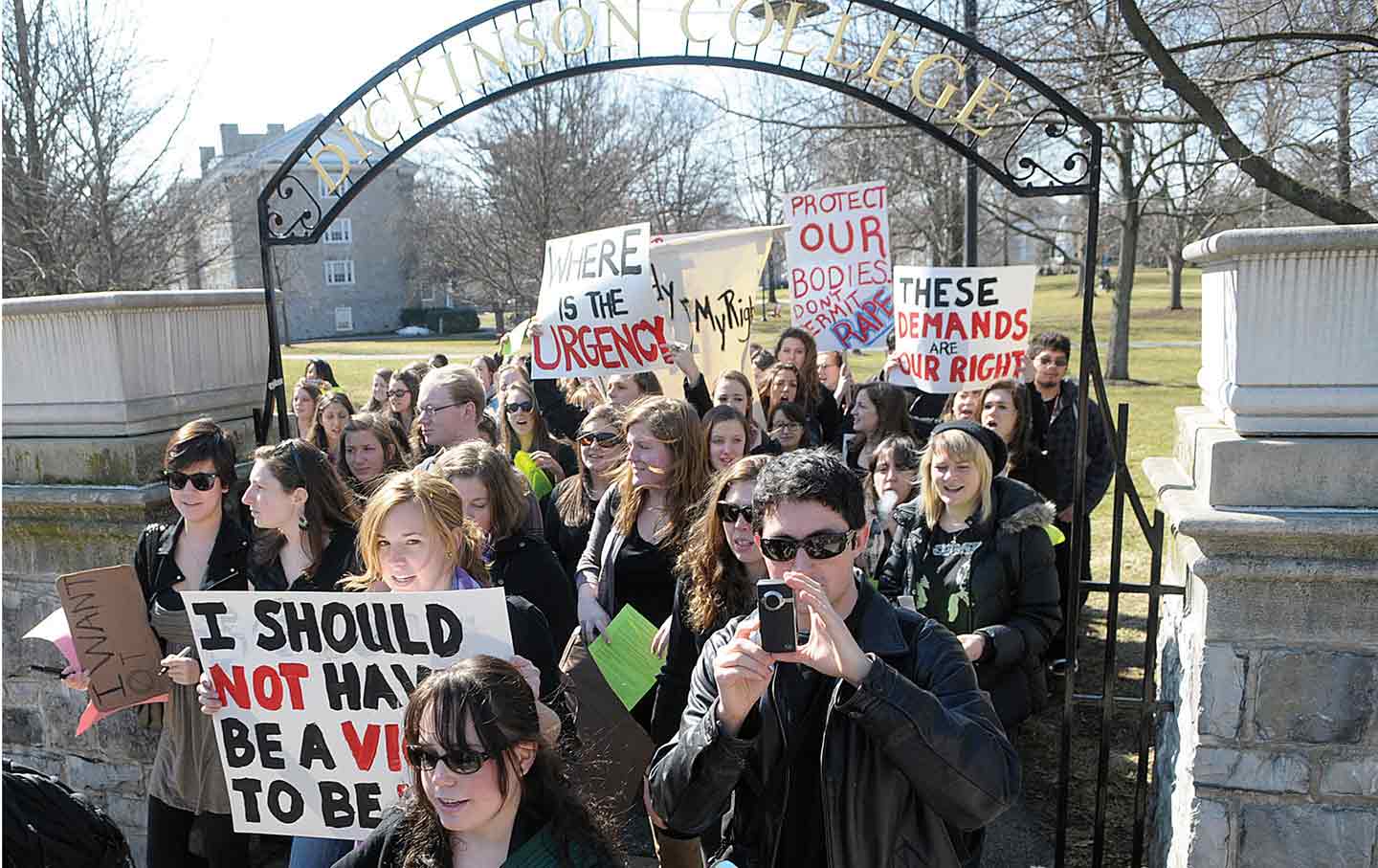 When Katie joined her Connecticut university’s rugby team as a junior, she was already years into an on-again, off-again romantic entanglement with another player. During their shared senior year, Katie recounts, the woman emotionally and sexually abused her. Violence within the close-knit, mostly queer rugby community went largely unacknowledged, but Katie eventually learned that this same teammate had hurt another player as well. She needed to be stopped.

Yet Katie decided not to file a formal complaint with her college’s disciplinary board. She wanted this woman she had loved, a first-generation college student, to graduate on time. And, more importantly, Katie did not think a suspension or expulsion would further her ultimate goal: “I wanted her to understand why what she was doing was wrong.” She also wanted the rugby community to hold this woman accountable and play a role in preventing future violence.

The national dialogue about campus sexual violence has focused largely on punishment: why students who have done terrible harm have not been punished, what kinds of acts should be punishable, whether current methods of punishment are unfair to one party or the other. But this fixation on rare suspensions and expulsions ignores many students who wish their schools would attempt to rebuild, and not only sanction, in the aftermath of their assault or abuse.

A report released last Wednesday by a group of researchers at Skidmore College’s Campus PRISM Project proposes a solution: restorative justice for campus gender violence. “Restorative justice” is a term thrown around a lot, sometimes inaccurately, to describe a wide range of practices that foster conversation between the wronged and wrongdoers. At their best, the complex, time-intensive processes give form to the core commitments of restorative justice: focusing on the needs of survivors and engaging all involved parties, including the wrongdoer and larger community, in developing meaningful, tailored solutions—which may include punishment as one factor among many.

The new report urges schools to consider piloting one popular “RJ” model, known as restorative conferencing. After intensive preparation, participants—who may choose RJ over other, more traditional disciplinary options—sit around a table with a facilitator, who encourages dialogue with a carefully prepared script. The parties discuss the harm and then, together, develop a detailed timeline to restore the harm done and reintegrate the wrongdoer. This alternative to adversarial hearings, the Skidmore researchers believe, will  better address the real needs of survivors and offenders while avoiding the trauma of antagonistic disciplinary clashes. Unlike a traditional hearing, RJ requires the accused to admit wrongdoing before the process even begins; the question at issue is what can be done to remedy the harm, not whether it happened. (Neither party may be forced to participate in RJ, so accused students who maintain their innocence are routed to standard discipline processes.)

To many outside observers, the idea of a victim discussing her rape with her rapist and his family is plainly preposterous. To University of Arizona professor Mary Koss, a longtime proponent who collaborated with Pima County prosecutors to launch the first restorative-justice program for victims of sex crimes, making that discussion possible is the point. “Most victims say that they want to tell their story and be heard,” she explains. “They want to be validated as a legitimate victim. They want to attempt to do their part in making sure the person doesn’t hurt anyone else and have some input into the consequences.” Adversarial student discipline hearings, Koss says, often force victims through traumatizing hearings and investigations without addressing their desires, thanks to schools’ singular focus on defining and punishing rule-breaking (which, she notes, they only very rarely do for sexual offenses).

Koss’s diagnosis rings true to some activists. Last year, while Emma Sulkowicz carried her mattress around Columbia’s campus to protest her alleged rapists’ continued enrollment, No Red Tape, the activist group of which she was a part, held an open discussion about RJ on campus. By the end, the question was not whether Columbia should implement a restorative-justice program for student survivors but rather how, remembers Caitlin Lowell, who graduated from Columbia last May. Many students worried about sending wrongdoers out into the wider world without truly addressing their harmful behavior, leaving others beyond the campus at risk. The activists wanted their school to punish rapists—but they wanted more than punishment, too.

For now, this vision of restorative justice for campus gender violence is mostly hypothetical. Looking back, Katie wishes her school offered conferencing options but, like almost all colleges and universities across the country, it does not.

The University of Michigan’s three-year-old RJ program for gender violence is the oldest and most developed in the country. It is still limited in scope, available only for cases of sexual misconduct other than assault—like harassment or some dating violence (which can include verbal and emotional abuse)—where the school’s Title IX coordinator does not believe the wrongdoer poses a continued threat to the community that the school has a legal responsibility to address. Holly Rider-Milkovich, the director of the school’s Sexual Assault Prevention and Awareness Center, was eager to talk about the promises and risks of restorative justice on campus. But she was unable to tell me anything about how the process has actually worked for Michigan students. The school has determined it could legally allow RJ for only a handful of cases, and she feared providing even anonymized accounts might threaten the confidentiality of past participants. Instead, she referred me to Koss’s writings.

Not everyone is optimistic. Some see restorative justice responses to gender violence on campus as just another way for universities to avoid providing consequences for those who commit sexual assault or abuse. “It’s the new version of ‘write a paper,’” says Jyl Shaffer, the University of Cincinnati’s Title IX Coordinator, referencing the five-page book report Occidental College assigned to a student found responsible for rape, according to a federal complaint.

Koss is quick to point out that restorative justice does not necessarily preclude serious consequences for wrongdoers: Participants in an RJ process may decide, for example, that the wrongdoer should leave campus. But it is hard to doubt Rider-Milkovich when she says a RJ focused on mutual understanding, re-education, and rebuilding is less likely to result in harsh penalties than traditional disciplinary proceedings.

For some victims and advocates, that’s not a bad thing. Not every survivor wants his or her assailant to be expelled, survivors and activists like Katie told me. Yet universities have a long history of doling out embarrassingly lenient penalties for sexual misconduct. Research by both the Center for Public Integrity and The Huffington Post show only a fraction of students found responsible for sexual assault are expelled. The recent wave of student activism has turned “punishments” like the Occidental book report and Yale’s single-day suspension for attempted rape into shocking headlines. For advocates finally making some progress in the fight for schools to address gender violence, restorative justice may reasonably sound like a new label for an old practice.

Properly executed RJ procedures depend on the voluntary participation of the victim, and Campus PRISM Project and Koss believe it should be one option of many available for students. Yet some critics fear social pressure—including a very gendered expectation that good girls forgive—may lead survivors to opt into restorative processes even when they would rather pursue an adversarial, punitive model.

Instituting restorative-justice programs, then, may genuinely expand options for some survivors, while, paradoxically, limiting them for others. “What happens when a victim says, ‘Yeah, I don’t want to forgive you. Yeah, I don’t want to sit across the table from you’?” ask Shaffer. “Are they the problem?”

And, critics emphasize, colleges have a legal and ethical responsibility not only to victims but also to their classmates who may be at risk. For now, schools lack the evidence they need to know if restorative justice stops students from reoffending. Research in the criminal context suggests that young sex offenders may be rehabilitated, and some studies on youth recidivism after restorative interventions in the juvenile justice system are promising. During the four years of Koss’s RJ program in Pima County, only one participant was rearrested. Yet existing studies are scarce and limited by a focus on rearrests rather than offenses. None have looked at RJ for campus sexual misconduct. Without better data, the risk of a wrongdoer’s hurting someone else is too great for some to tolerate any intervention other than suspension or expulsion, counseling against RJ.

Then again, Katie’s school never had a shot at convincing her assailant, the rugby player, to change her ways: Without an RJ option, Katie didn’t file a complaint at all.