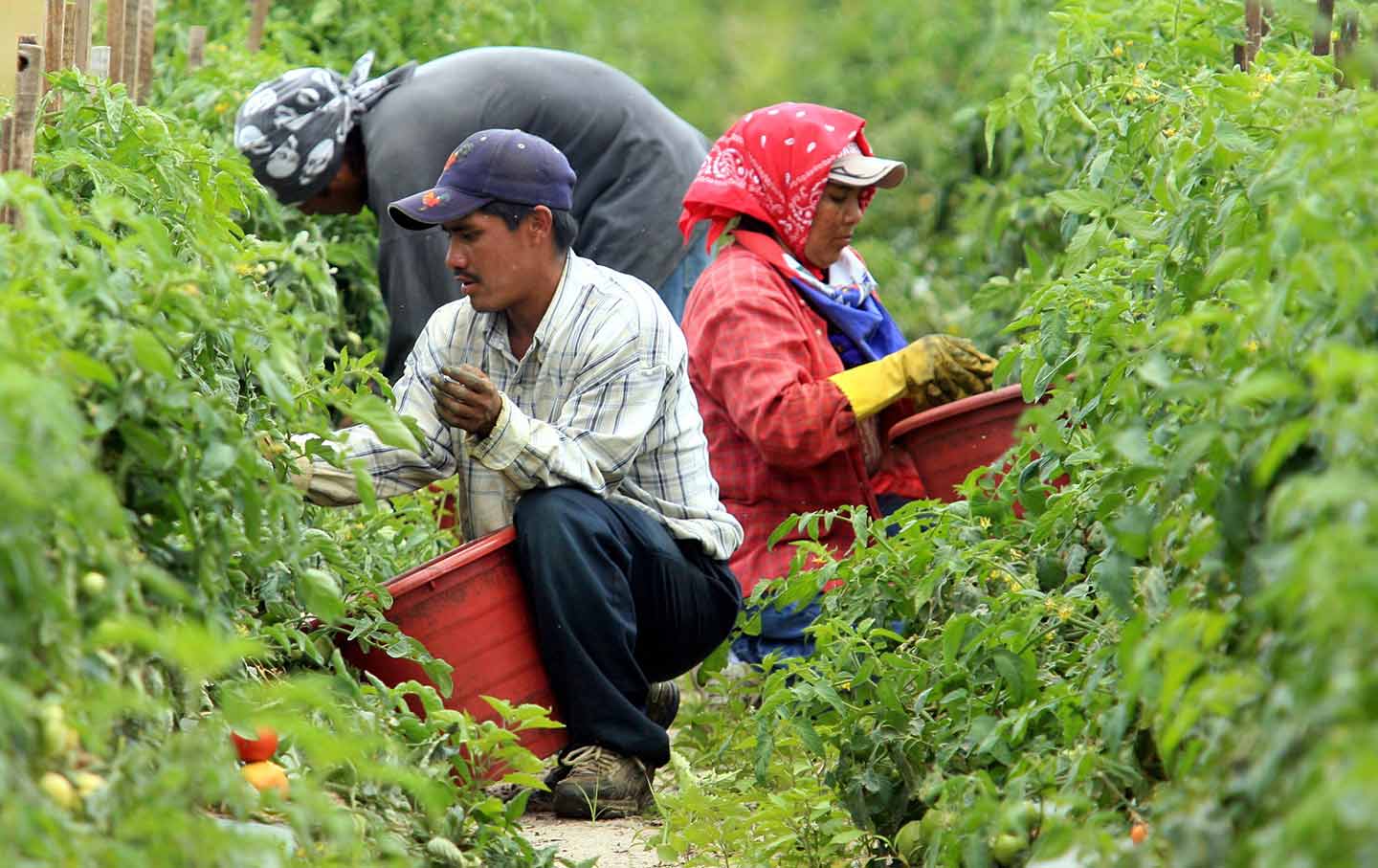 What could Hollywood’s brightest stars learn from farmworkers in Florida’s tomato fields? When it comes to creating a workplace where women are empowered to report sexual harassment—and receive justice rather than retaliation when they do so—the farmworkers of the Coalition of Immokalee Workers (CIW) offer a proven model. That the group created this solution in a town known less than a decade ago as “ground zero for modern slavery” makes it all the more remarkable and promising for other industries.

Agriculture is a notoriously dangerous industry for women. Eighty percent of women farmworkers report having experienced some form of sexual violence on the job. The CIW is addressing this crisis through its Fair Food Program (FFP), which puts market pressure on tomato growers to enforce a strict code of conduct in their fields. The code, which was developed by workers themselves, sets various human-rights standards, one of which is zero tolerance for sexual assault. (It mandates immediate firing for unwanted “physical touching.”) If violations of the code go unaddressed, the result is severe economic consequences for the grower.

To enforce the code, which covers more than 90 percent of Florida’s $600 million tomato industry, the CIW has established legally binding agreements with 14 of the world’s largest retail food corporations that purchase tomatoes—including WalMart, Whole Foods, Trader Joe’s, and all major fast-food companies, with the exception of Wendy’s. These corporations promise to cut off purchases from farms that are out of compliance with the code. Now tomato growers know if they don’t crack down on abuses in their fields, they can’t sell their produce to these major buyers. These agreements didn’t come easily: CIW educated consumers about the plight of farmworkers via hunger strikes, marches, and direct action. It took intense public pressure to get most of the corporate retailers to sign on.

Eighty percent of women farmworkers report having experienced some form of sexual violence on the job.

Nely Rodriguez, a CIW staff member originally from Mexico, says it’s the economic consequences that make all the difference. “We’ve shown how the power of the market can be used to improve the conditions in the field,” she says. Under the FFP, workers are able to monitor their own workplaces for violations of the code, and can lodge complaints via a trilingual 24-hour hotline operated by an independent monitoring organization, which does annual announced and unannounced audits on every participating farm and investigates all complaints. (During those audits, they speak to at least 50 percent of the workforce, including workers, crewleaders, and supervisors.) In contrast to other workplace hotlines that might be contracted out, or answered by a machine or a corporate HR representative, CIW’s always has an expert on-call who understands the power dynamics of the tomato industry. Headed by a retired New York State Supreme Court justice, the monitoring organization also audits the payroll, looking for minimum-wage violations and enforcing the penny-per-pound tomato surcharge that buyers pay to administer the program.

From the Women’s March to #MeToo, Building Feminist Solidarity in the Age of Trump

Since the Fair Food Program started, “Everything about working in the fields as a woman has changed,” Rodriguez says. Every new hire immediately receives a trilingual pamphlet and watches a CIW-produced video about the code, and then participates in worker-to-worker education sessions in the fields. “You literally can see people speaking up about issues—even in front of the bosses—during these sessions,” she says. “You see the lack of fear—it’s a completely different culture,” Rodriguez says. Prior to the FFP, it was “commonplace” to either suffer sexual violence or to know a victim, “and there was never any consequence if it came to light, or the consequence was the woman losing work.”

In recent years, 23 supervisors have been disciplined and nine fired as a result of complaints. When a violation requires corrective action, growers don’t hesitate, because they know the hit they will take to their bottom line if they fail to comply. Rodriguez says the number of allegations has slowed, and the nature of the allegations has also changed, as employees and supervisors come to understand that “zero tolerance” truly means zero tolerance. “Instead of a boss who watches women when they are sleeping, now it might be some vulgar language on the bus,” she says.

CIW’s model is now being replicated in other states, and reaching workers in other industries—most recently dairy workers in Vermont. The MacArthur Foundation recently wrote that it offers the “potential to transform workplace environments across the global supply chain.” And The New York Times called it “the best workplace-monitoring system” in the United States. The CIW has exported its model to farms in seven states and three crops along the East Coast, and it will soon be piloted on citrus and watermelon farms in Texas. It is also informed historic reforms in the Bangladesh garment industry, and is being studied by janitorial and construction workers in Minnesota.

“We’ve shown how the power of the market can be used to improve the conditions in the field."

Could this approach work in the television and film industry? The key question is, what parts of the supply chain are equivalent to the tomato buyers? If a CIW-like movement led by the women of Hollywood inked legally binding agreements with 150 major corporations, declaring that they would not buy advertising on network shows that were in violation of a code offering recourse to victims of harassment or assault—that could be a start. What about agreements with the platforms that stream content, like Netflix, mandating that they will carry only films or shows produced by companies that are in compliance with that same code? One could even look at potential agreements with cable providers and national movie-theater chains. All of these agreements would together send a signal that sexual misconduct will not be tolerated in the television and video supply chain, and that companies that do not comply with the agreed-upon code will experience severe economic consequences.

“All Hollywood has to do is ask who has the power, and then bring public pressure to get those agreements signed,” says Rodriguez. “If a solution came from the most unexpected place to eliminate sexual violence in the workplace, they can do it too. And then they could help make sure the model reaches more workers in industries across the country who don’t have the platform and resources that they have.”