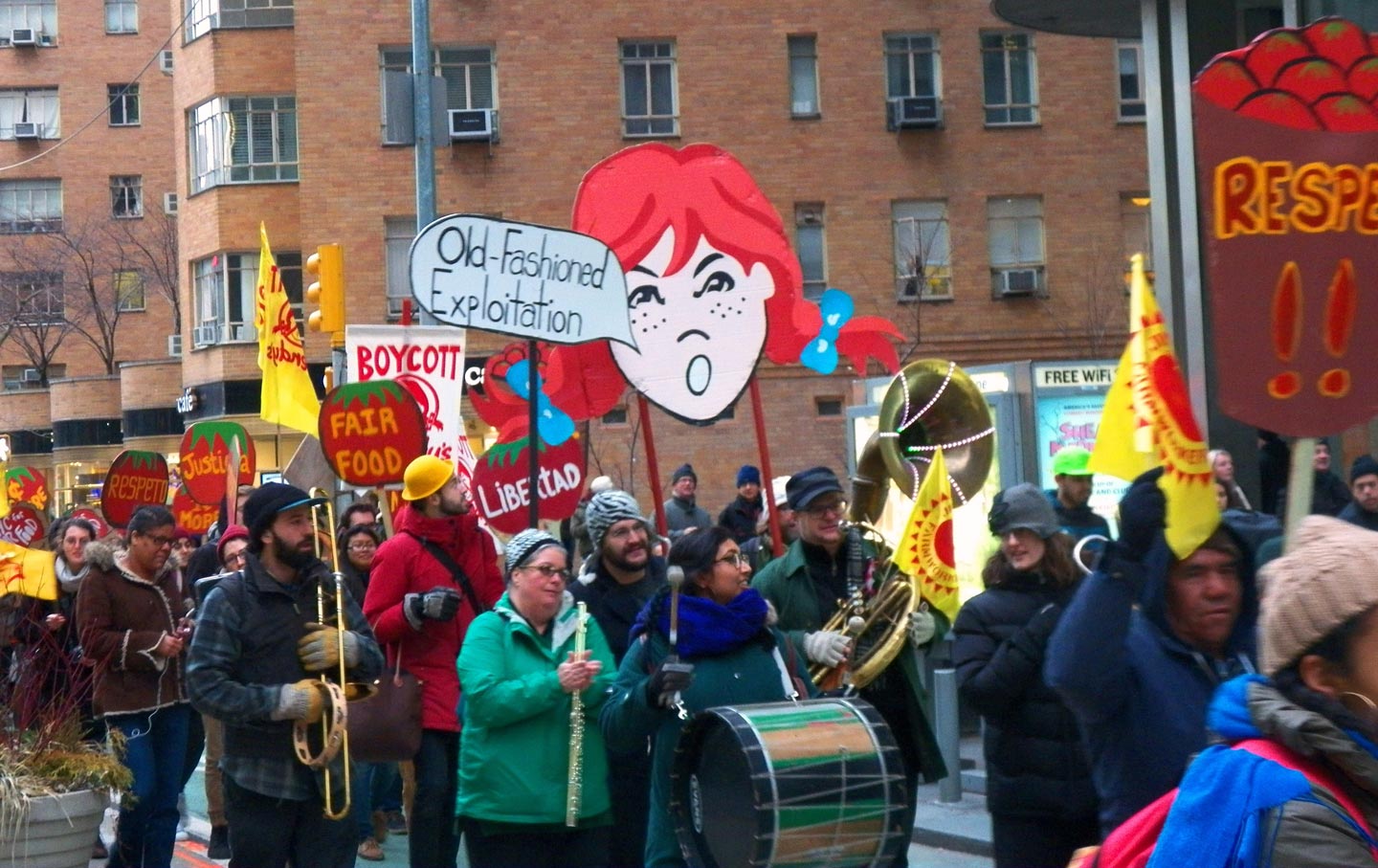 Workers march with Fair Food allies to offices of Wendy's President Nelson Peltz in New York City, in their fight for farmworkers’ and all workers’ rights. (Mark Apollo / Pacific Press via AP Images)

For over a decade the small coalition of farmworkers and community activists have taken on the giants of Big Ag and built a new system of labor protection. Now they’re taking the fight to a Goliath in red pigtails.

The Coalition of Immokalee Workers (CIW)—an internationally renowned farmworker group (and leading early labor ally of one former presidential candidate)—is leading a nationwide boycott of Wendy’s, to pressure the fast-food giant to participate in a “worker-led social responsibility” system that links corporate accountability with labor justice from farm to table.

CIW farmworker-member Julia De La Cruz spoke from a recent summit of activists in Florida, where community groups strategized on the nationwide boycott: “Wendy’s…is continuing to profit from the sweat of workers and not acknowledging the work that we do…. They don’t even want a dialogue with us. And what we’re to make them do is take responsibility for the workers in their supply chain.”

Although other brands like Whole Foods and Subway have been pressured to sign on to CIW’s Fair Food program, Wendy’s has issued its own corporate social-responsibility code, presented in a glossy 20-page booklet that workers say is full of empty promises.

Wendy’s states that “Suppliers are expected to fairly compensate and provide wages, benefits and overtime premiums to their employees that comply with applicable laws and regulations.” Notably, the plan does not layout general rules for fair labor conditions beyond the legal minimum, without mandating direct sanctions for suppliers who fail to meet the company’s “expectations.” CIW rejects the softer language, insisting on its own system of regular auditing under a worker-led monitoring program, which ties corporate membership in the program to a system of sanctions for violations.

“What they’ve done instead is create a code of conduct behind which they can stand, that doesn’t really support the human rights of farmworkers,” de la Cruz says. In contrast to CIW’s grassroots initiative, she adds, the Wendy’s plan “basically does not include any worker voice or worker participation.… they created it basically to evade taking responsibility for the conditions of workers in their supply chain instead of joining the Fair Food Program.”

Wendy’s has also sought to circumvent the Fair Food program through the market, by sourcing tomatoes in Mexico, even further distanced from public scrutiny by US regulators or community groups. Various media outlets have confirmed that Wendy’s and other US mega-corporations have sourced tomatoes through Kaliroy, an arm of the Mexican agro-giant Bioparques de Occidente. A recent Los Angeles Times investigation showed Bioparques labor camps to be rife with extreme poverty, violent abuse, substandard housing, child labor and wage theft—issues that brutally echo the same kind of slavery-like labor practices on Florida farms against which CIW’s immigrant workers originally mobilized in its early campaigns.

Having corralled 90 percent of Florida’s tomato industry under its program, CIW mobilizes as a roadblock in the industry’s race to the bottom in global agricultural labor. Wendy’s stands apart from other large-scale buyers in “deriving a very real cost advantage over its competitors,” CIW argues, “while continuing to provide an alternative market for less reputable growers.”

In the next few months, CIW’s grassroots consumer campaign, Alliance for Fair Food, is rolling out six regional tours covering more than 20 cities nationwide, with outreach events like film screenings and workshops. The branding of the campaign as a “Fair Food” initiative (with an accompanying labeling scheme to certify approved products), incorporates economic-justice principles for workers and the communities that are targeted by Wendy’s marketing, which sells fast food as an affordable choice in a commercial system that leaves families few options for more ethical or sustainable meals.

Labor activists have enlisted college students to stage boycotts on campuses and pressure school administrators to stop contracting with unethical tomato suppliers through dining-service firms or through on-campus chain restaurants, including Wendy’s.

With aggressive marketing, Wendy’s “likes to target young folks and college students…but they’re not really being truthful about where their food is coming from,” says Pamela Escalante, a Georgetown University campus activist with the Student-Farmworker Alliance. “And for students such as myself who really do care about where my food is coming from, the human rights of other folks on this planet, that’s not something that I’m interested in participating in.”

Over the past several years, the Fair Food Program has instituted “verifiable human rights protections for 35,000 farmworkers and their families,” according to the CIW’s latest annual report: The program’s worker-directed grievance system fielded about 440 labor complaints from 2014 to 2015, most of which were resolved through correctional plans within a two-week period. Living conditions have modestly but significantly improved, with participating companies funneling “nearly $20 million in Fair Food Premiums to improve workers’ wages since 2011.”

The fair-food model’s blend of quasi-union principles and community advocacy has in recent years expanded to farms in Georgia, North and South Carolina, Virginia, Maryland, and New Jersey. They have also launched organizing campaigns for bell pepper and strawberry crop workers, and have partnered with Vermont dairy workers to adopt the Fair Food model for their own labor-protection program.

“They see bad working conditions and even violence and sexual harassment, which is something that we see in our workplace,” she said. “We support what they are doing as workers because they’re also workers in the food chain that are fighting for their rights.”

As a counter-marketing campaign, the Alliance for Fair Food, which grew out of partnerships with faith, labor, and immigrant rights groups in the late 1990s and 2000s, shows that grassroots activism too can achieve industrial economies of scale, by linking labor rights and consumer fairness.

The Coalition of Immokalee Workers’ campaign won’t overturn agribusiness. But, it’s making Florida a different kind of Swing State this November, with migrants leading the call for a new political voice: voting with your wallet for a fairer food system.