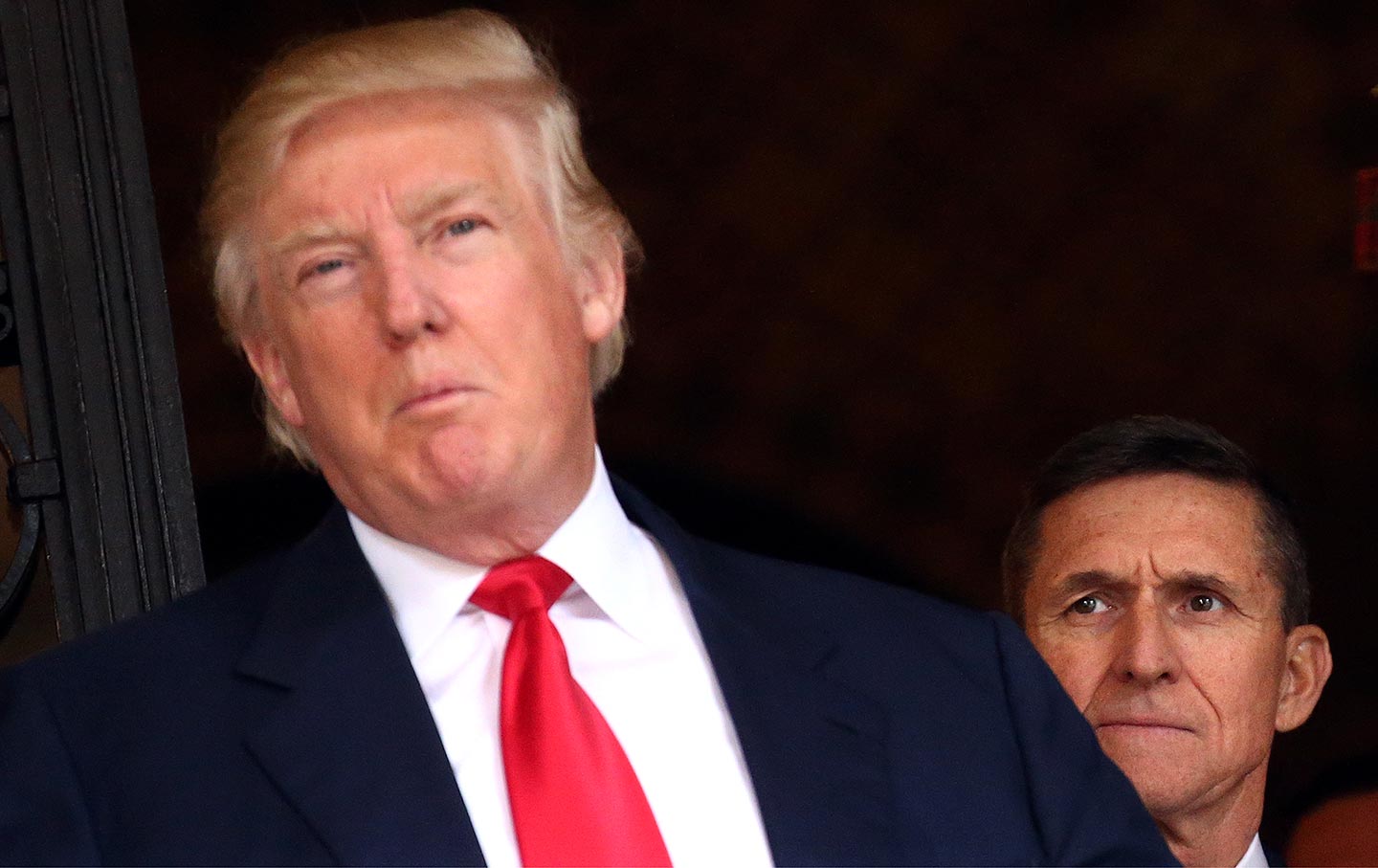 The country is a little bit safer with Lt. Gen. Michael Flynn deposed as National Security Adviser—but not much. It’s a relief to be rid of the paranoid, Islamophobic, fact-averse Trump adviser who reportedly didn’t know he needed Congress to approve new arms deals. But let’s be clear: The White House cover story for Flynn’s departure makes no sense. The most dangerous person in the White House still has a job.

Flynn resigned, according to the Trump administration, not because he was caught talking to Russian Ambassador Sergey Kislyak about sanctions imposed by President Barack Obama in December but because he lied to Vice President Mike Pence about it. Late Monday night, he admitted to giving Pence “incomplete information” about his conversations with Kislyak, which supposedly led Pence to repeat lies about those talks to the press. That was the first story, anyway. Late Tuesday afternoon, the White House claimed Trump asked for Flynn’s resignation. But the real question is the age-old puzzle about corruption in the White House: “What did the president know and when did he know it?”

We have just learned that Trump actually knew about his national-security adviser’s sanctions discussions with Kislyak at least by late January. That’s when, according to The Washington Post, acting Attorney Attorney General Sally Yates brought transcripts of Kislyak’s intercepted calls to the White House, and warned that Flynn could be subject to Russian blackmail for lying to Pence. Trump fired not Flynn but Yates shortly afterward, when she refused to enforce his travel ban. It took him until now, though, to acknowledge that he’d been warned about Flynn’s talks with Russian leaders, and that’s mainly because of intelligence-community leaks to reporters about the Flynn transcripts.

The good news is that suddenly we have the media widely asking the old Watergate question about what the president knew and when. In the last 24 hours, I’ve heard that from cable reporters so young they can’t remember Richard Nixon and may not even know the question’s origin. The media seem newly energized by the cascade of leaks from the intelligence agencies. It’s more challenging than simply cherry-picking damaging disclosures about Hillary Clinton from Wikileaks (which Obama warned were provided by hackers with ties to the Russian government, shortly before he left office), which had been the media’s obsession throughout much of 2016.

The bad news is that we’re at the mercy of intelligence-community leaks, as various factions in the three-letter agencies peddle their stories to reporters. That’s because so far, the congressional GOP leadership, which has the power to escalate investigations into not only Flynn’s ties to Russia but other Trump staffers’, as well as the president’s—has been missing in action.

On Tuesday morning, House Speaker Paul Ryan declared himself satisfied that Trump “fired” Flynn—although the White House didn’t admit that until hours later. Ryan said he wasn’t ready to call for an independent investigation into Flynn’s actions without more information. (Of course, an independent investigation is a time-honored way to get more information, but whatever.) The chair of the House Intelligence Committee, Representative Devin Nunes, defended Flynn up to and even after his departure. “Washington, D.C., can be a rough town for honorable people, and Flynn—who has always been a soldier, not a politician—deserves America’s gratitude and respect,” Nunes said in a statement. Nunes said he might investigate the topic nonetheless—but only the matter of intelligence-community leaks about Flynn to reporters.

Senate majority leader Mitch McConnell quickly dismissed calls for an independent investigative effort. “The [Senate] intelligence committee is already looking at this,” he told reporters today, noting that its leaders have subpoena powers.

Democrats say the issues demand more than that. “We are in a fight for the soul of our democracy,” Representative Elijah Cummings, the ranking member of the House Oversight Committee, declared on Tuesday. Cummings wants his committee to investigate the Flynn mess, but Republican committee chair Jason Chaffetz, who promised to investigate the issue of Clinton’s e-mail even after the election, insists “the issue is taking care of itself,” and doesn’t need his committee’s involvement.

Meanwhile, there’s a circular firing squad in the West Wing, with Trump factions leaking against one another two or three times a day. Now it looks like Steve Bannon’s faction is blaming White House Chief of Staff Reince Priebus for throwing Flynn under the bus. Breitbart.com, Bannon’s white-nationalist headquarters, says “GOP establishment forces inside President Donald Trump’s White House forced out” Flynn—and is reporting that Priebus will be the next to fall.

Clearly, the Trump administration is unraveling—but with partisan Republicans in charge of both the House and the Senate, no one in power is taking charge of investigating whether the problem is dysfunction, corruption, or both. The New York Times reported on Monday that House and Senate GOP leaders say they’re mostly satisfied with Trump because he’s giving them what they want in terms of cutting taxes, spending, and regulations.

“There’s a widely held view among our members that, yes, he’s going to say things on a daily basis that we’re not going to like,” South Dakota Senator John Thune told the Times, “but that the broad legislative agenda and goals that we have—if we can stay focused on those and try and get that stuff enacted—those would be big wins.”

So that’s the GOP playbook. Evidently it’s going to take more voter outrage to make Republicans join the “fight for the soul of our democracy.”