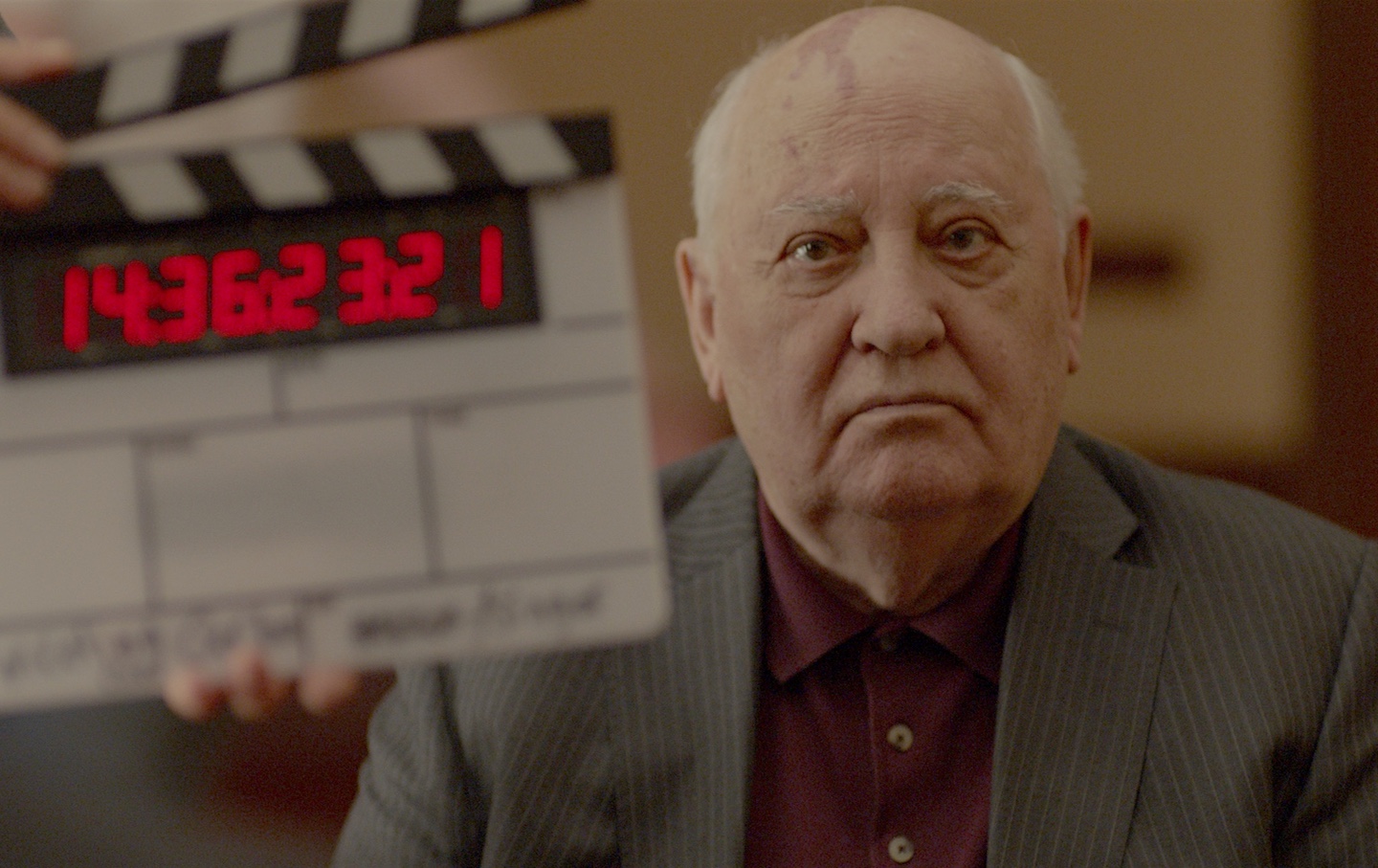 It has been almost 30 years since the collapse of the Soviet Union, and Mikhail Gorbachev wants to define his own historical legacy. As the 88-year-old Gorbachev told German documentarian Werner Herzog last year, his tenure as the USSR’s final leader was defined by three major accomplishments: bringing an end to the Cold War through perestroika, a commitment to nuclear disarmament, and endeavoring to bring democracy to the republics in his domain. This last process, he admits, he was unable to finish.

Gorbachev’s other two accomplishments have a flip side. As we’ve seen in recent years, efforts toward nuclear disarmament are in danger of reversal, as the US, Russia, and China seek to modernize their arsenals. And even though perestroika—a series of modernizing political and economic reforms Gorbachev spearheaded—succeeded in helping end the Cold War, it also precipitated the end of the USSR as an entity altogether. This may have been a positive development (depending on whom you ask) but certainly not one that Gorbachev ever wanted or even imagined. For these reasons, he remains a divisive figure. For the same reasons, he gains Herzog’s curious admiration. After all, Herzog has always had a soft spot for tragic heroes and headstrong men, and the nature of Gorbachev’s failed idealism is reminiscent of that of a number of Herzog’s previous subjects. Timothy Treadwell—the protagonist of Herzog’s Grizzly Man (2005), who lived among wild bears in Alaska—immediately comes to mind.

While Herzog was clearly skeptical of Treadwell’s utopian vision, Meeting Gorbachev is nothing short of a love letter. (Toward the end of the film, Herzog even says he loves Gorbachev outright—largely for his role in German reunification in 1990.)

Compared with many of Herzog’s previous documentaries, this one is fairly straightforward, based largely on excerpts from three conversations between the two men in 2017 and 2018, together with a smattering of interviews with Gorbachev’s political contemporaries (Margaret Thatcher, former Polish president Lech Wałęsa, and cabinet members under Ronald Reagan and German chancellor Helmut Kohl) and a selection of fascinating and well-curated archival footage from the end of the Soviet era.

Herzog’s narrative of Gorbachev’s early life is the stuff of German romanticism. He imagines Gorbachev, the son of peasants who worked a collective farm in a small town in the countryside, sleeping in the barn as a child, “next to a newborn calf, with a goose nearby hatching an egg.” Helping his father as a young man, Gorbachev could tell what was wrong with the harvester by the sounds it made, and the teenage Gorbachev won the Order of the Red Banner of Labor for harvesting a record crop. (A few of his relatives died of starvation in famines years earlier.) “It is hard to imagine that from such a godforsaken place in the middle of nowhere, one of the greatest leaders of the 20th century emerged,” muses Herzog.

As Gorbachev moved to Moscow for college and gradually rose through the ranks of the Communist Party leadership, Herzog pauses here and there to point out Gorbachev’s exceptionalism. For example, it was due to his academic and agricultural achievements that he was accepted into Moscow State University without taking entrance exams. And after graduation in 1955, when he moved back to his home province and joined the Komsomol in Stavropol, unlike any other politician at the time, he went out of his way to meet the people—walking through the countryside to see for himself the peasants’ lives and hardships. In 1974, as party boss of the Stavropol region, he finished a canal project that even Joseph Stalin had abandoned. For this last feat, he was awarded a medal by Leonid Brezhnev, and Herzog not only digs up footage of the ceremony but also notes Brezhnev’s senility at the time, with aides and the recipient having to remind the ailing leader of Gorbachev’s name and the reason for the award.

Herzog’s wry narrations, there and throughout the film, are the highlight of the documentary. Most memorable are the funeral processions of the third, fourth, and fifth general secretaries of the Communist Party of the Soviet Union—Brezhnev in 1982, Yuri Andropov in 1984, and Konstantin Chernenko in 1985—presented one after another, as if in a farce. “The last of the fossils,” Herzog calls Chernenko, who spent the majority of his rule terminally ill and in a hospital room, with aides propping him up for official appearances, as he could no longer stand on his own. (Herzog magically finds archival footage of these moments in the hospital as well.)

With the fossils out of the way, Herzog observes, the relatively young Gorbachev, 54 at the time, could step up. In 1985 the Politburo elected him to the highest post in the country. “Perestroika was at the top of the agenda when I first became general secretary,” he tells Herzog. “More democracy was our first and foremost goal…and more socialism.”

But only a year after he took office, Chernobyl wreaked havoc on the Eastern bloc. Herzog blames the nuclear disaster on “rampant incompetence in the system, cover-ups on all levels, and a self-destructive secrecy at the very top of the political establishment.” Gorbachev immediately gets defensive. “As soon as we understood what had happened, which did take some time, we told the whole world,” he says. (It wasn’t until radiation had spread to Scandinavia that the USSR was forced to admit that something catastrophic occurred on its soil, although it remains unclear exactly how long local authorities waited before informing Gorbachev of the disaster’s true magnitude.)

The tension is palpable in the few minutes that Herzog and Gorbachev talk about Chernobyl, and it’s the only time in the documentary that Gorbachev appears uncomfortable. He shuts down Herzog’s questions, saying something very general about how Chernobyl is a lesson we can still learn from, and briskly changes the topic. “No matter what anyone says,” Gorbachev states, “the proposals to end the Cold War first came from the Soviet Union.”

Chernobyl seems to be the one thing that Gorbachev is unable to spin in his favor. While he was seen as weak for failing to quash independence movements in the Soviet satellite states, he now takes pride in having triggered them. While he was blamed for the dissolution of the USSR, he says he fell victim to a political power struggle. While we think that the end of the Cold War was a triumph for Western democracy, Gorbachev calls it a conscious decision on the part of both the US and the USSR. “Americans thought they’d won the Cold War, and this went to their heads. What victory? It was a joint victory. We all won,” he says. 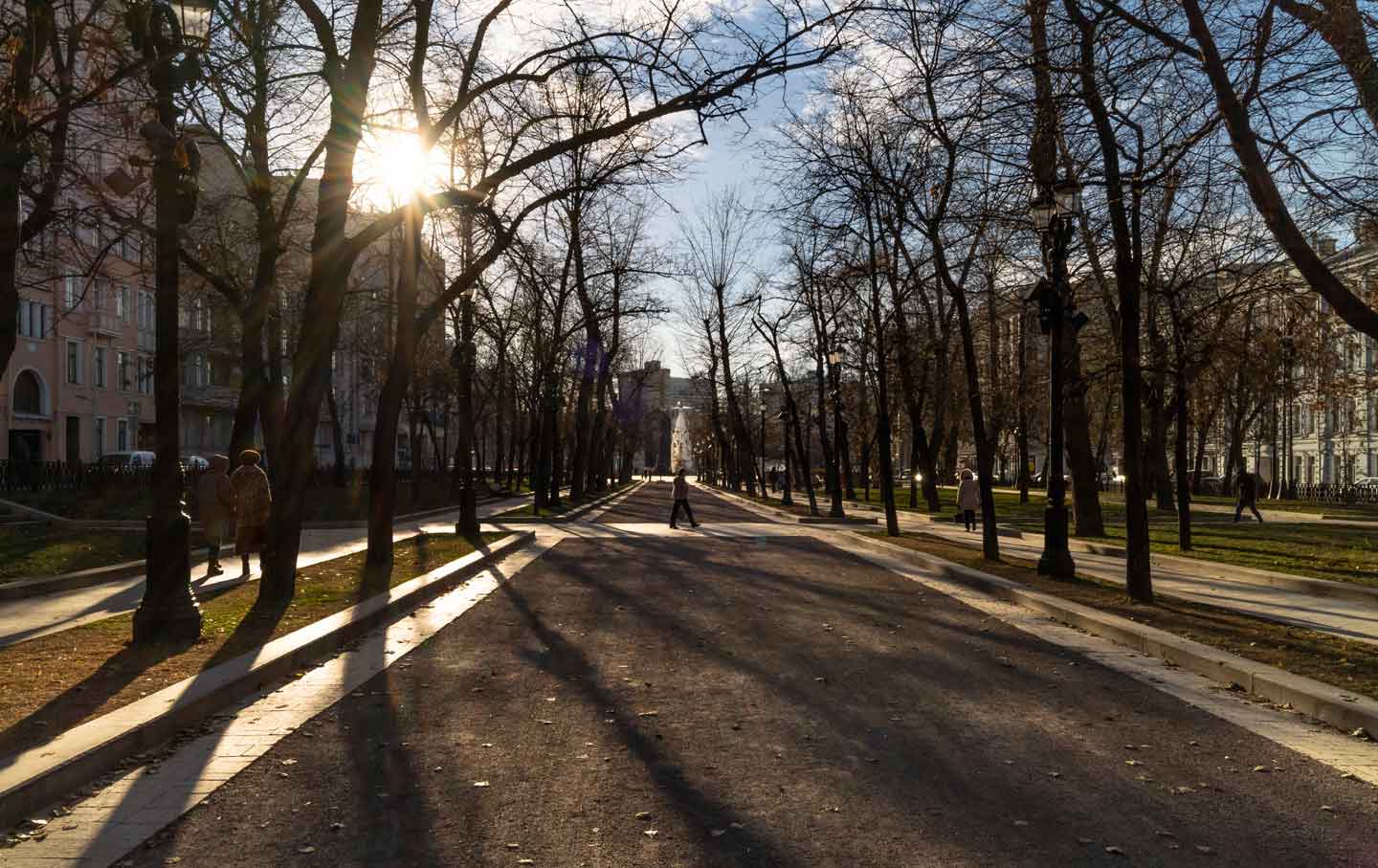 Keith Gessen’s Portrait of a Moscow Caught Between Two Worlds

Throughout Meeting Gorbachev, Herzog seeks not only to highlight the importance of his subject’s actions as the leader of the USSR but also to humanize him. After all, a tragic hero must be relatable in order to be truly tragic. But Gorbachev refuses to show any real flaws. The Chernobyl question would have been the perfect opportunity for Herzog to press Gorbachev to tell the whole timeline of events in the disaster’s aftermath and his feelings about it (then and now), but Herzog instead lets these uncertainties float away unaddressed. Herzog has never claimed to be a journalist, after all, and he rarely discusses politics. (It’s interesting to think what kind of film Errol Morris might have made with this kind of access to Gorbachev.) At the end of the film, Herzog asks Gorbachev very specific questions about his wife, Raisa Gorbacheva, who died in 1999. Does Gorbachev remember her laughter? Her perfume? “Yes, all of it,” comes the reply matter-of-factly. “We were very close.”

A humanizing portrait can imply some vulnerability. And although we don’t get much vulnerability from Gorbachev, Herzog rises up as the accidental, background protagonist of the story. Herzog’s earnest belief in Gorbachev’s failed idealism is endearing. He brings Gorbachev a late birthday present, an enormous box of specially made sugar-free chocolates (Gorbachev is diabetic), and when Gorbachev mentions that Kohl once compared the Soviet leader to Nazi propagandist Joseph Goebbels, Herzog immediately jumps to apologize “for this crazy remark.”

In the end, Meeting Gorbachev teaches us much more about Herzog than about the film’s purported protagonist. Herzog clearly wishes that Gorbachev had accomplished his plan of bringing a more democratic socialism to the USSR. Herzog implies that maybe then, the oligarchs would never have risen to power in Russia and the disparity of wealth and widespread disillusionment wouldn’t have resulted in a relapse in nationalist animosity and a “new Cold War.” With his film, Herzog seeks to share an important message of the value of international cooperation over rivalry. Perhaps it’s Herzog then, not Gorbachev, who is the tragic hero.