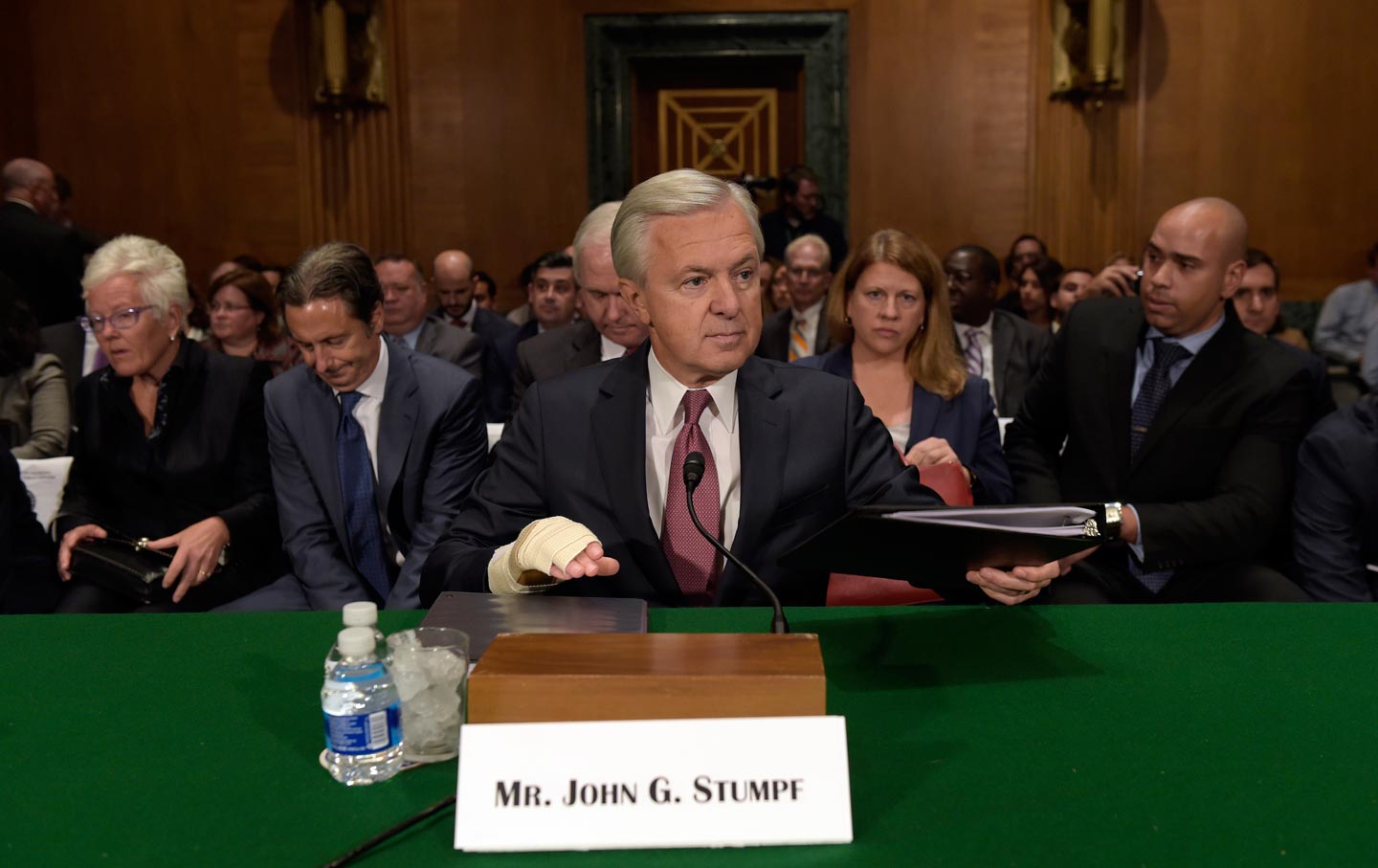 EDITOR’S NOTE: This article inaugurates a new column, “Insurgencies,” which will appear on TheNation.com and occasionally in print. It will probe the clash between people and plutocrats, failed shibboleths and new ideas, and explore the emerging strategies linking people in motion with progressive champions in office.

Update: On September 28, California State Treasurer John Chiang, who is running for governor, blasted Wells Fargo for “venal abuse of its customers” and announced that the state was “suspending business relations” with Wells Fargo for a year. This affects a significant profit center for Wells, the second-largest underwriter in California municipal debt in the first half of 2016. Chiang called on Wells CEO John Stumpf to resign and urged other states and municipalities to review their relations with the bank. Connecticut and the City of New York have already announced reviews. Bloomberg reports that federal prosecutors in New York and San Francisco have opened criminal inquiries. Wells Fargo faces a blizzard of lawsuits by fired workers, defrauded customers, and investors. Wells stock has lost 11 percent, or about $27 billion, in market value since the scandal broke, with more losses certain to follow.

“The business model of Wall Street is fraud,” Bernie Sanders proclaimed repeatedly on the stump. Wall Street’s big banks seem intent on proving his case. Most recently, Wells Fargo—whose CEO, John Stumpf, was celebrated as “banker of the year” by American Banker in 2013—has been fined $185 million for abusing its own customers. From 2011 to 2015, the company opened nearly 2 million bank accounts and more than 500,000 credit cards for customers who didn’t ask for them, engaging in fraud, identify theft, and forgery along the way. Its customers, as former Wells Fargo sales manager Beth Jacobson put it, were “all riding the stagecoach to hell.”

Wells Fargo executives touted the tactic of “cross-selling”: getting existing customers to buy the bank’s other products. To achieve this, executives set impossible quotas for sales personnel, called “team members.” Tellers and salespeople, often stuck in $35,000-a-year jobs, were told either to meet the quotas or lose their jobs. Bonuses were awarded to those who hit the sales targets—but the only way to meet them consistently was to cheat. When customers began to complain—after being charged fees for accounts they didn’t know they had, or seeing their credit ratings lowered for credit-card applications they didn’t know they’d made—the bank set up the proverbial “cover-your-ass” briefings with its salespeople: warning them not to cheat, but keeping the quotas in place. Under increasing scrutiny from regulators, Wells Fargo fired some 5,300 low-level employees—as much as 2 percent of its workforce—over a period of five years, claiming that the frauds had been committed by rogue team members.

That won’t wash. This was a classic case of what legendary bank investigator William Black calls “control fraud”: a scam set up and sustained by top executives, who earned a fortune from it. All of the signs are there, starting with the 2 million fake accounts, which simply couldn’t be opened by a few bad apples. Whistle-blowers were ignored and often fired. Senior executives raked in bonuses as the company’s stock rose, benefiting from the charade. Thousands of low-level employees were fired for the frauds, but we don’t know how many more were fired simply for not meeting the quotas.

The executive in charge reaped obscene rewards. Even as the Consumer Financial Protection Bureau (CFPB) was closing in, Carrie Tolstedt—Wells Fargo’s senior executive vice president of community banking, who was in charge of the 6,000 branches where the infractions took place—was allowed to retire quietly. Praised by Stumpf as the “standard-bearer of [the bank’s] culture,” Tolstedt was paid a total of $27 million over her last three years. She’s in line to take at least $100 million in stocks and options with her.

To add injury to that insult, taxpayers will subsidize those bonuses. Companies can only deduct salaries up to $1 million as a cost of doing business, but in a reform championed by “market-savvy” New Democrats in the Clinton years, bonuses and stock options above that—­ so-called “performance pay”—can be written off. Sarah Anderson of the Institute for Policy Studies estimates that for Tolstedt’s bonus, Wells Fargo can deduct the $78 million from its income, effectively giving itself a $27 million tax break. Over the past four years, Anderson reports, taxpayers have ponied up nearly $160 million in subsidies to the bank for such “performance pay” bonuses.

Stumpf ducked responsibility before the Senate Banking Committee, stating, “I do want to make it clear that there was no orchestrated effort, or ‘scheme’ as some have called it, by the company.” Senator Elizabeth Warren scorned his “gutless leadership” and asked, “If you have no opinions on the most massive fraud that has hit this bank since the beginning of time, how can it be that you get to continue to collect a paycheck?” Stumpf, who pocketed $19.3 million last year, responded, “I disagree with the fact that this is a massive fraud.”

Sanders had it right: Fraud is the business model. As The New York Times’s Gretchen Morgenson reported, Wells Fargo used some of the same tactics during the subprime-mortgage frenzy that blew up the economy: “dubious practices,” she says, that “seemed as pervasive then as the questionable account-opening scheme does now.”

Wells, like other big banks, has a rap sheet that would put a mob boss to shame. It has coughed up more than $10.9 billion in fines for crimes and abuses on mortgages and foreclosures; for misleading investors; and for participating in municipal-bond bid rigging, money laundering, and discrimination against black and Hispanic borrowers. As the largest employer and third-largest in assets among US banks, Wells is too big to fail. Stumpf has boasted that its success is rooted in “the community bank DNA” that supposedly animates the company. But as an American Banker commenter noted: “A community bank CEO having presided over a fraud proportionally this large would already have his assets frozen, be awaiting prosecution and have been personally fined a substantial amount of money.” Instead, Wells and other big banks, with few exceptions, have been allowed to settle without admitting guilt. And while the banks have paid hundreds of billions in fines, the bankers who profited got off scot-free. So long as those in the top suites are not prosecuted, the scams and the fraud will continue.

Wall Street money still corrupts our politics. But there are stirrings of change. The glaring injustice stokes the populist anger that is rattling the establishment in both parties. Politicians are getting the message. Stumpf found himself under searing attack from the Senate committee, with Warren, Jeff Merkley, and Sherrod Brown denouncing him. Warren called for his resignation, a clawback of bonuses, and criminal prosecution. Regulators were pushed to make criminal referrals. Republicans who have tried to neuter the CFPB wondered why it took so long to act.

With Stumpf facing a House hearing and the Labor Department ramping up an investigation of Wells’s abuse of its employees, the bank’s somnambulant board finally stirred itself, announcing the clawback of $41 million in compensation from Stumpf and $19 million in stock grants from Tolstedt. Neither will end up in the poorhouse: Stumpf already holds 5.5 million Wells shares, valued at about $247 million.

Warren and Sanders, among others, have already put the next administration on notice that the old ways of doing business won’t cut it. As Warren noted, “Personnel is policy,” and she, Merkley, Brown, and Sanders are intent on jamming the revolving door between Wall Street and Washington, blocking, in Warren’s words, “advisers who just pay lip service to Hillary’s bold agenda, coupled with a sigh, a knowing glance, and a twiddling of thumbs until it’s time for the next swing through the revolving door.”

When the dust settles, Stumpf will no doubt be pushed out and retire a rich man. But politicians are learning that there’s a cost to being in Wall Street’s pocket—and a potential benefit to taking the big banks on. The suites are still lawless, but a posse has begun to form.