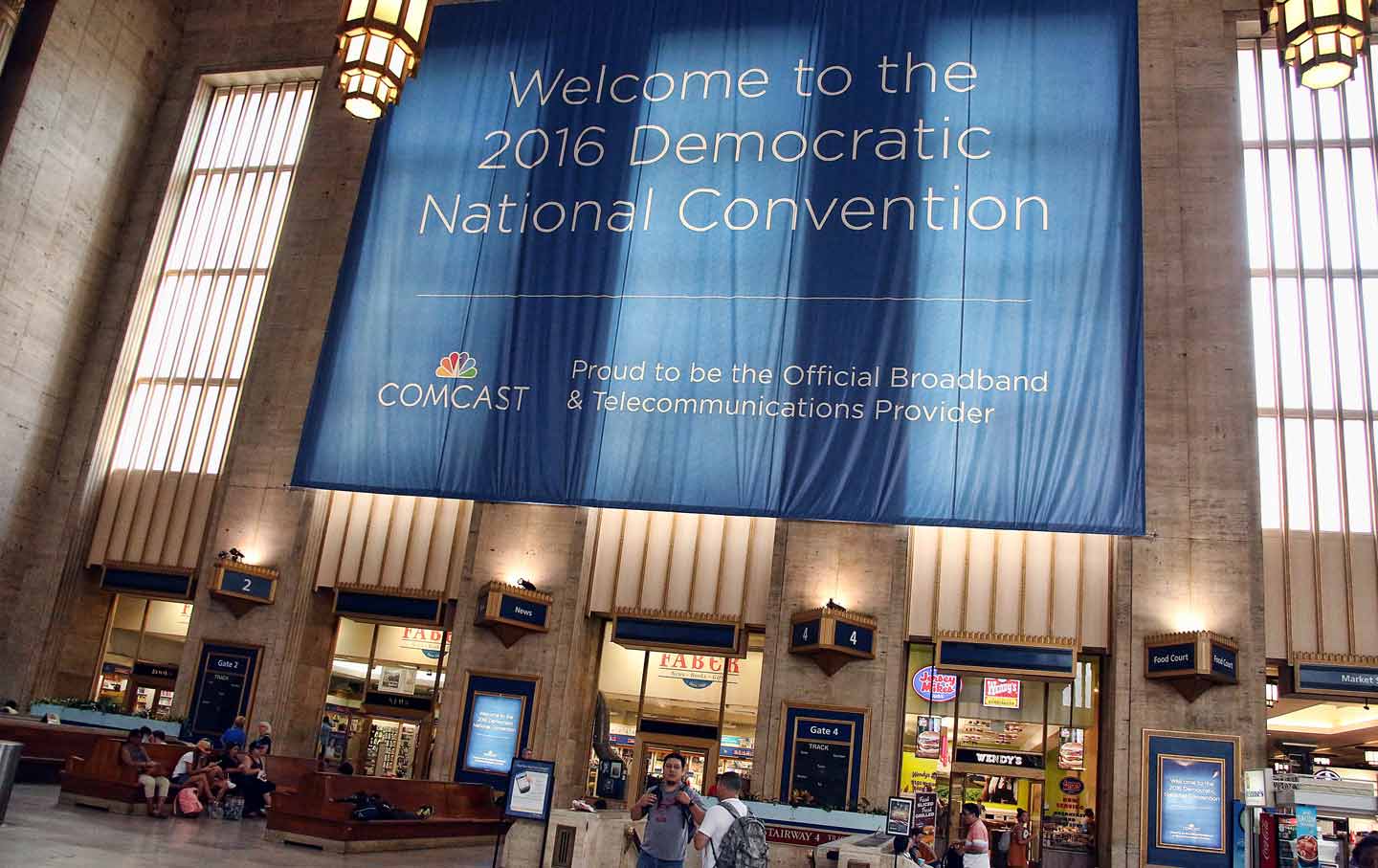 Corporate sponsorship is on the rise after Congress took away public funding for the national conventions. (Star Shooter / MediaPunch / IPX)

Philadelphia—In 1972, President Richard Nixon very much wanted to hold the Republican National Convention in San Diego. Not only did he hail from Southern California, but San Diego was a fairly conservative city that carried a smaller risk of repeating the mass-scale protests and chaos that occurred four years earlier in Chicago.

San Diego didn’t have the financial wherewithal to host the convention, however, and city leaders were dragging their feet. Nixon needed some cash to make it happen, and he found an eager sponsor in the International Telephone and Telegraph Corporation. The White House made secret arrangements for ITT to pledge $400,000 to help fund the convention (about $2 million in current dollars.)

At the time, ITT happened to be facing an antitrust suit brought by the Department of Justice. Eight days after San Diego announced it would host the RNC, in large part thanks to ITT largesse, that antitrust suit was dropped. A memo from ITT’s top lobbyist laid out an explicit quid pro quo with the Nixon administration, with the post-script, “Please destroy this, huh?”

After years of whittling down the public-funding provisions for conventions, Congress finally abolished public convention funding entirely in 2014. So when delegates descend on Philadelphia this week, it will be primarily big donors who are keeping the lights on inside Wells Fargo Center. The same was true last week in Cleveland.

“Congress has completely withdrawn from the good-government role of having publicly financed conventions, and have turned it entirely over to the corporations and very wealthy individuals,” said Craig Holman of Public Citizen. “Now the conventions are entirely financed by special interests.”

This has been a long time coming. In 1996, the Federal Election Commission allowed “host committees” to pay for some convention-related costs, which quickly became a conduit for corporate cash. But the government still gave each convention $20 million in taxpayer funding, making it somewhat less necessary for parties to rely on wealthy patrons.

As soon as Congress scrapped the public funding for conventions in 2014, both the Democratic and Republican parties asked the FEC to dramatically increase the contribution limits for people who wanted to help fund conventions. The FEC granted their request, and instead of an annual limit of $33,000, individuals can now give up to $133,600 each year to fund the conventions.

Moreover, the DNC did not renew its self-imposed ban from 2012 on corporate and lobbyist cash for the convention-host committee.

Taken together, this means special interests will have unique and largely unprecedented control over the DNC this week. One-quarter of the convention committee funds has already come from fifteen single donors giving the maximum allowable amount, according to a report from the U.S. PIRG Education fund.

That’s the part we can see—the host committee finances will remain secret until 60 days after the convention to disclose who paid for it. “Not only are we seeing bigger checks written to finance the convention, but we have much less accountability,” said Holman. “Once the conventions are over, people just don’t pay much attention to where the money came from.”

An independent journalist has made surprising headway in trying to force the Democratic host committee to disclose its funding sources: Dustin Slaughter filed a suit demanding that the committee file a donor report with a local government agency because of a grant it received. A judge is considering the case, though as of this writing had not made a decision. (Update 7/26: The judge denied Slaughter’s request to make the host committee disclose its finances.)

When the donors finally come out, we’re likely to see big corporate interests with imminent needs from the federal government. In 2004, for example, the pharmaceutical industry was in the middle of a fierce fight to prevent importation of Canadian drugs, and heavily funded both party conventions, as a report from the Campaign Legal Center notes. In 2008, as the economy was lurching towards disaster, corporations who would later receive billions in taxpayer bailouts contributed heavily to the RNC and the DNC. That included the largest shareholder in the Ford Motor Company, along with the insurance giant AIG and mortgage buyer Freddie Mac.

Beyond the big-ticket donations, Philadelphia will be awash this week in panels, parties, and cocktail hours sponsored by lobbyists and trade groups. Many of these gatherings are technically in violation of congressional ethics rules if they are thrown for the benefit of a member of Congress or congressional committee, but those rules are easily gamed. Sometimes lobbying groups will hire event-planning groups to “throw” the party, thus making it not officially lobbyist-sponsored.

The rules from the House and Senate ethics committees are also different, which creates a lot of confusion as to what is allowed and what isn’t. Certain parties a House member can attend would be forbidden for senators.

“Whether it was by design or not, the actual impact has been that this leaves everyone unclear as to what the rules are, and so the rules are largely violated at the conventions,” said Holman. “Lobbyists, lobbying entities, members of Congress, staffers, all pretty much feel that the conventions are a rules-free zone. And they act that way.”