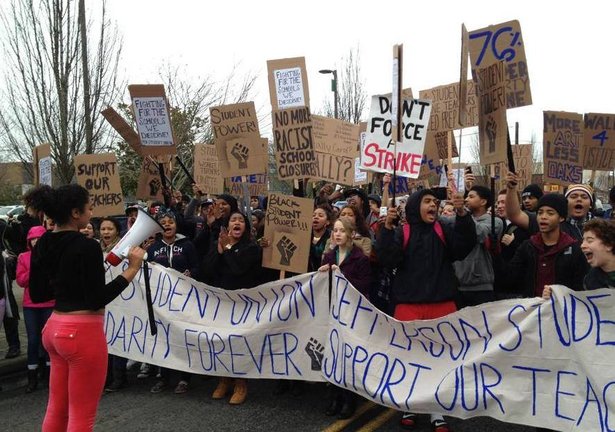 Last spring, The Nation launched its biweekly student movement dispatch. As part of the StudentNation blog, each dispatch hosts ten first-person updates on youth organizing in the United States—from established student unions, to emerging national networks, to ad hoc campaigns that don’t yet have a name. For January updates, check out the previous post. For an archive of earlier editions, see the New Year’s dispatch.

1. As Portland Prepares to Strike, Thousands of Students Hit the Streets

On February 5, the Portland Student Union held a day of action in solidarity with the Portland Association of Teachers in support of its vote to authorize a strike. Six schools and more than 1,000 students participated, ranging from lunch-time rallies to walkouts to marches through downtown and southeast Portland. The students’ marches passed local elementary and middle schools, defying police attempts to block roadways. Later that night, more than 200 students, parents and workers rallied outside the PAT’s meeting in sub-freezing conditions. The vote was nearly unanimous, with a strike set for February 20.

On January 29, Providence students, dressed like guinea pigs and lab rats, flooded the Rhode Island state house to protest the state’s new standardized testing experiment, which turns the state assessment, or NECAP, into a make-or-break graduation requirement. Armed with whiskers, animal ears and paws, members of the Providence Student Union called out the state department of education for treating students like lab animals. This demonstration was the latest in a series of youth actions demanding Rhode Island replace its high-stakes policies with proven, evidence-based assessments and investments. From challenging public officials to take the test themselves, to organizing zombie protests, to sitting in, the union will continue its “More Than a Test Score” campaign for assessment policies that support, rather than punish, young people.

On February 8, 80,000 people gathered in Raleigh for the Moral March and HKonJ People’s Assembly. Young people, from the NAACP and beyond, were instrumental in the organizing. It has consistently been the energy and determination of the youth, from the Freedom Riders and students leading anti-segregation sit-ins in the 1960s to those who risked their lives organizing in the Jim Crow South, that prick the national conscience and highlight injustices. Today, from the undocumented youth of California to Ohio students resisting Stand Your Ground to Florida’s Dream Defenders, we embrace this legacy of struggle. As we enter the fiftieth anniversary of Freedom Summer, it is once again us, the youth, calling all forward. In North Carolina and beyond, voting rights, access to education, fair wages, equal protection under the law and, simply, the ability to be are issues that we are ready to mobilize around.

For five years, the Washington DREAM Act Coalition and the Latino@ Educational Achievement Project have organized DREAMers for immigrant justice. In 2013, with bipartisan passage in the state house of representatives, the battle to include undocumented students in state financial aid took off—until the bill died in the higher education committee. Since then, with massive lobby day actions, DREAMers have upped the pressure. On the first day of this year’s session, the house passed the state DREAM Act. On January 17, DREAMers met with Republican senator and DREAM Act opponent Barbara Bailey to share how unequal treatment has impacted their lives. On January 31, with Bailey’s support, the Senate passed similar legislation, the REAL Hope Act, which allows all DREAMers who are residents of Washington to compete for state financial aid. As it heads back to the house, we are confident that bipartisan leadership will send the bill to the governor’s desk.

5. At the Tar Sands, Convictions Ignite a National Groundswell

On January 31, Lisa Leggio, Vicci Hamlin and Barbara Carter were found guilty of “resisting and obstructing a police officer” at a peaceful protest against the Enbridge oil corporation in Stockbridge, Michigan, last July. In 2010, an Enbridge pipe, Line 6B, spilled more than 1 million gallons of tar sands oil into the Kalamazoo River, killing more than 100 people and destroying the river. Now, Line 6B is being expanded to triple the capacity of tar sands oil—and the convicted protesters face multiple years in prison. In response, supporters of the Michigan Coalition Against Tar Sands, or MICATS, have arisen in solidarity. Thousands across the country participated in a February 3 Keystone XL vigil; others have written letters; and direct action groups like the Tar Sands Blockade have staged action upon action confronting Enbridge and associated agencies. On February 4, joining students from Texas to Alaska, the Student Environmental Alliance at the University of Central Michigan gathered to write letters of support to the MICATS3. Meanwhile, MICATS affiliates, such as DCATS, continue to organize at sites where tar sands production hits hardest, including 48217, Delray, the third-most-polluted zip code in the country.

6. At Columbia, Prison Divestment Takes Off

This spring, students from several campus organizations are collaborating on Columbia Prison Divest, an initiative of Columbia’s chapter of Students Against Mass Incarceration, a Black radical organization that sees prison abolition as its ultimate end. On February 3, students delivered a letter to Columbia University President Lee Bollinger demanding that the school divest from the private prison industry, including the roughly $8 million that Columbia had invested in the Corrections Corporation of America as of June 30, 2013. At Columbia, we are part of larger efforts to build a nationwide prison divestment campaign, including the work of the Dream Defenders at the University of Central Florida and the Black Student Union at UC Santa Barbara. Through CPD, we are challenging the system of mass incarceration on our campus, holding our university accountable for its complicity and insisting that Columbia meet its multicultural rhetoric with tangible action.

On February 3, Penn State became the sixth of seven universities, and first Big Ten school, to stand up for Bangladeshi workers’ rights and safety. Penn State, UPenn, NYU, Temple, Duke, Columbia and Georgetown each have released letters to their licensees asking them to sign onto the Bangladesh Fire and Building Safety Accord—or their contracts will be cut. The accord ensures that brands take responsibility for factory workers’ safety in Bangladesh, where three of the largest and most tragic accidents in the garment industry have taken place. United Students Against Sweatshops, a national student-run organization, has been fighting for the accord since fall 2013. In October, Penn State held a candlelight vigil in honor of the six-month anniversary of the Rana Plaza collapse to promote awareness of the issue and the benefits of the accord. The combined efforts of USAS, Penn State’s Workers’ Rights Coalition and the administration sealed the deal.

8. In Immokalee, Wendy’s Hits the Menu

On January 26, leaders from the Student/Farmworker Alliance convened in Immokalee, Florida, to announce the launch of Boot the Braids, a youth-driven effort to end university contracts and preferential licensing agreements with Wendy’s. For more than a year, members of the Student/Farmworker Alliance network have been organizing in solidarity with the farmworker-led Coalition of Immokalee Workers in calling on Wendy’s to join the CIW’s groundbreaking Fair Food Program, created by farmworkers to implement wage increases and human rights codes in Florida’s tomato fields. Beginning with “Boot the Bell” in 2001—a campaign focused on cutting contracts with Taco Bell—students have been a driving force in the twelve subsequent agreements between the CIW and major corporate buyers, most recently Walmart. The week of February 10, students across the country are staging a Boot the Braids National Week of Action. Until Wendy’s joins the Fair Food Program, students will continue raising the pressure.

In October, the Philadelphia Coalition Advocating for Philly Schools led “Nightmare on Rittenhouse Square: Monster March for Full School Funding & Tax Fairness.” Students, parents, educators and community members spoke out against tax abatements given to wealthy real estate developers—while Philadelphia public schools suffer from a funding crisis. The march and rally were documented by a youth news program called Presenting our Perspective on Philly Youth News, or POPPYN. Based at the University Community Collaborative of Philadelphia, POPPYN aims to highlight youth perspectives across the city. We believe that youth media is an important part of the struggle for Philly schools because it allows us to capture and amplify the voices, hopes and fears of young people fighting to succeed in a broken school system.