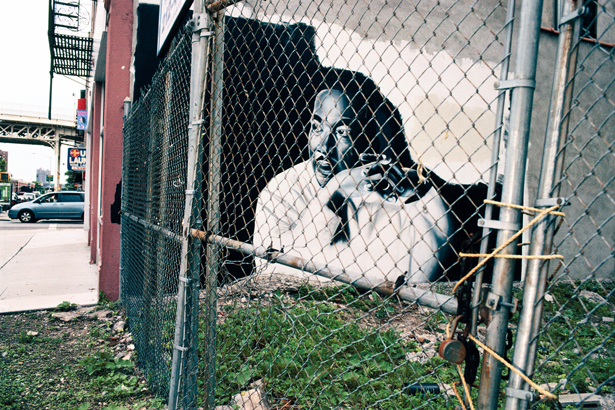 From California to the New York island, American cities are in the midst of unprecedented physical change. Land that once belonged to working-class communities is being rapidly gobbled up, occupied and shorn of inconvenient reminders of poverty, diversity or history. In San Francisco, Google Buses have transformed working-class immigrant neighborhoods like the Mission district into playgrounds for Silicon Valley entrepreneurs and engineers. Closer to home, gentrification washes across New York City.

One especially striking example of that transformation is the subject of longtime Nation contributor Camilo José Vergara’s new book, Harlem: The Unmaking of a Ghetto, in which the photographer—awarded the National Humanities Medal by President Obama last year—employs his landmark “rephotography” technique to capture how that neighborhood has changed in the forty years he has spent as one of its chroniclers. Vergara’s ambivalent feelings about gentrifying Harlem stem from a recognition of just how far the neighborhood had fallen in previous years. “For many, the new Harlem may mean the loss of a familiar ‘down-home’ place, a more aggressive police presence on the street, and growing economic hardships,” he writes. “For others, however, the neighborhood demonstrates the evolving and ever more multicultural society of the United States.”

In the twenty-five years since he first contributed to The Nation, Vergara has presented for readers an unparalleled portrait of the trials and tribulations of marginalized minorities in American cities. His camera and his pen have succeeded, as few others have, in capturing both the striving and the strife of those abandoned by money and power, left to make their way in the oddly beautiful ruins of the twentieth-century city. In fact, one can think of his articles for The Nation as themselves a form of rephotography, with the photojournalist returning again and again to see how cities and their inhabitants adjust themselves to negotiate ever-changing realities.

In “New York’s New Ghettos” (June 17, 1991), Vergara described the emergence of a new form of social-service ghetto, in which the deeply racist image of an “urban jungle” was replaced by an equally problematic, highly bureaucratized web, segregating the poor from the rest of the city and alienating them from life itself. To understand the “resurgence” of places like Harlem in recent years, it is vital to understand their recent history; as Vergara’s 1991 essay shows, Harlem didn’t fall—it was pushed.

New York, famous for its garment district, its diamond district and others, now has its districts for the “homeless industry.” Group homes for children and battered women share buildings with homeless families; drug treatment centers, methadone clinics, shelters, soup kitchens and correctional institutions are also springing up. By encircling the blocks in which large concentrations of these facilities coexist with deteriorating housing projects in areas of heavy drug dealing and relocation of formerly homeless people, one can map New York’s new ghettos.…

The clustering of destitute people and facilities in isolated sections is no remaking of the old ghettos. These “districts” are characterized by their bureaucratic rules, comprehensiveness of form, publicly supported economy and populations marked by the experience of homelessness and addiction. People do not choose to go to these areas; they are sent there, uprooted from neighborhoods and people they know. A small number of downtown officials make the rules that determine who is entitled to reside in most of the housing and to use the facilities. Lower-ranking officials select the needy and refer them to these places.

As much as they are defined by what they possess, the new ghettos are defined by what they lack. In other parts of the city that were once as poor as these, community development organizations have rebuilt economically mixed neighborhoods, pushed out drug dealers and prevented the city from building NIMBYs [prisons, sanitation centers, etc.]. But people in the new ghettos are too disconnected to have formed effective organizations. The transient character of the majority of the residents leaves such urban areas unclaimed, and thus politically powerless.

Vergara concludes his essay by arguing against gradualist optimism. Real change, he felt, would require something radical—going down to the problem’s very roots.

The new ghettos refute the notion that eventually we will all be part of one big middle class. During the past decade the “war on poverty,” whose goal was to uplift the poor, has been redesigned merely to contain the poor, further segregating them from the rest of society. With their big shelters, busy social services offices and deteriorating housing projects, these areas employ thousands of social workers, guards, corrections officers, nurses and doctors at a huge cost. Now, at a time of fiscal crisis, the budgets that maintain the vast array of welfare and government services in these areas are subject to shrinkage and deferral of all but minimal expenditures. In the words of a local resident, the bright new facilities will soon look like “just another rathole.” But even costlier, and more deleterious, is the contribution of these new ghettos to dependency, illness and delinquency, and to the waste of human beings. Before the full entrenchment of these nightmarish “districts,” the people of New York City need to plan how to dismantle them and begin again.

Vergara’s most recent Nation contribution was in last year’s special issue marking the fiftieth anniversary of the March on Washington. In photographs and an accompanying essay, Vergara documented street art across the country commemorating Martin Luther King Jr. as “statesman, visionary, hero and martyr.” Murals and graffiti, Vergara wrote, “represent a shared history of beliefs” which “give us glimpses into what the residents of America’s poor minority communities hold as meaningful.” In typical Vergara fashion, he found much to both celebrate and bemoan about what he saw:

It is ironic that, given King’s lifelong struggle against segregation and poverty, his name and likeness have become one of the defining visual elements of the American ghetto, a place he worked his whole life to abolish. His dream of justice and equality for all seems as distant for the seemingly permanent ghettos of today as it was when he was alive.