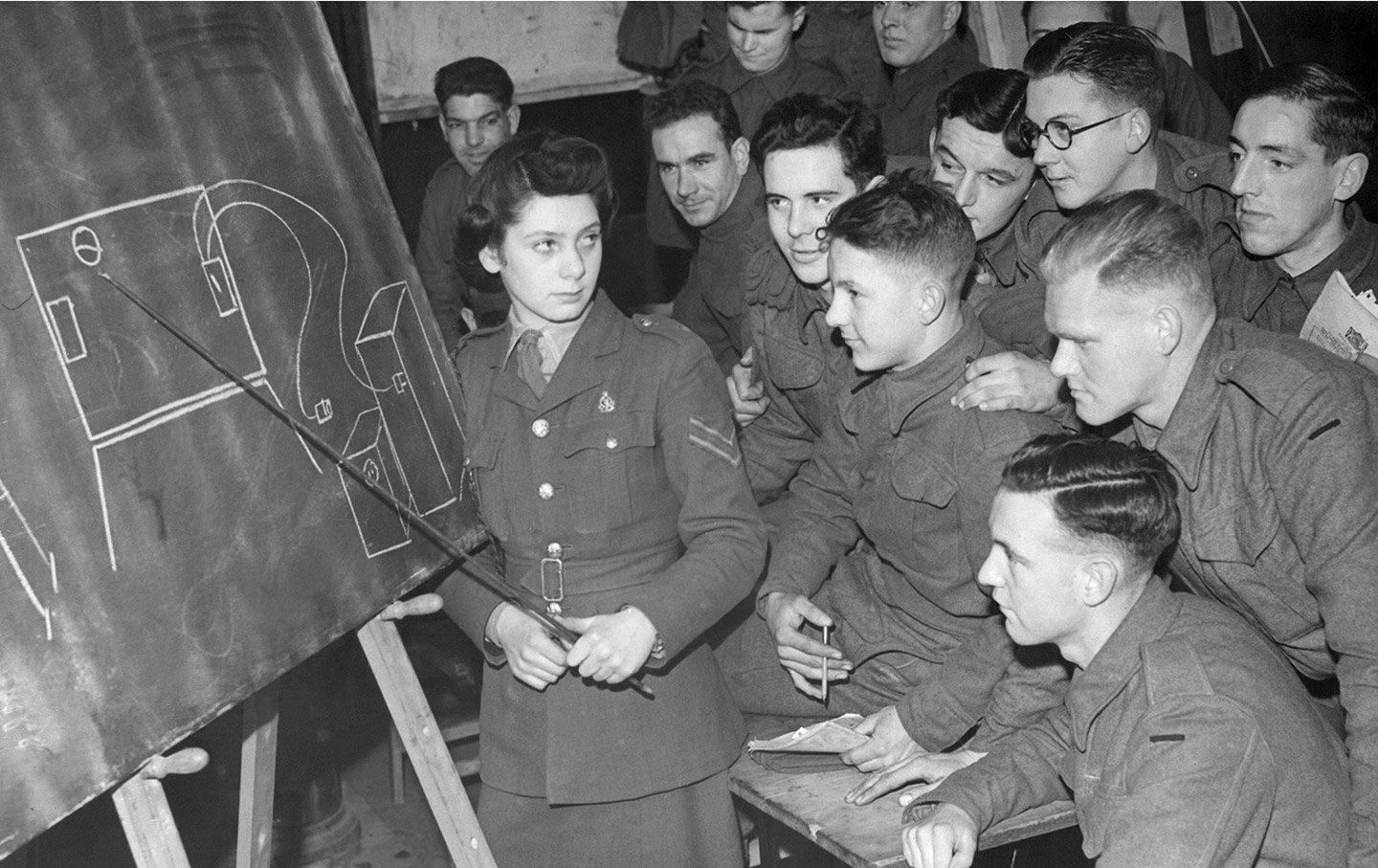 Corporal Margaret Young gives a lecture to her class, in this case the Royal Army Service Corps men, who are learning some of the mysteries of wireless with the aid of a blackboard and highly technical diagrams, drawn by this efficient corporal, January 25, 1943. (AP Photo)

The British called it “Window”; the Luftwaffe dubbed its version “Düppel.” For the Americans, “Chaff” was the code name for the top-secret weapon that, in July 1943, allowed the US Army Air Forces to obliterate Hamburg in broad daylight. For the past two weeks, the Trump administration has been using a Chaff approach to media management—and if we don’t learn how to deal with it, we may suffer the same fate as Hamburg.

In the early months of World War II, scientists in Britain, the United States, and Nazi Germany were all working on the same problem: Radar, the technological breakthrough that turned the tide in the Battle of Britain by giving the Royal Air Force early warning of German raids, also made Allied bombers much more vulnerable to antiaircraft fire. Joan Curran, a British physicist, came up with a solution: thousands of narrow strips of aluminum-coated paper dumped from the sky to create a massive cloud of decoy images, blinding German radar and rendering their air defenses useless. Overwhelmed by a blizzard of potential targets, the German gunners didn’t know where to aim.

We see a buffoon, but Trump’s supporters see a man who keeps his promises.

And now we have Trump, with his barrage of outrageous and offensive comments, his waves of unqualified or conflict-ridden nominees, and his daily assault on the most vulnerable among us. The first temptation is to respond to everything, to protest everything—which, while satisfying in the short run, eventually leads to exhaustion and despair. The second temptation is to panic—to interpret all Chaff as enemy incoming and assume we’re facing an overwhelming attack. If you’ve been reading any of the sometimes frighteningly plausible, and often well-intentioned, articles claiming that we’re on the verge of some kind of coup, then you’ll know exactly what I’m talking about.

But hold on a minute: Trump has the White House. The Republicans control the Senate and the House. In a few months, they’ll have another seat on the Supreme Court. Why bother with a coup when they already have power in their hands? Instead of reverting to fight or flight—Canada? New Zealand? I’ve even heard of people whose grandparents fled the Holocaust applying for German citizenship—we need to start thinking strategically.

How can we effectively respond to Trump’s weapons of mass distraction? First, by distinguishing the signal from the noise. Since the inauguration, my Twitter feed has been a torrent of outrage over Trump’s pronouncements (or, in the case of Holocaust Remembrance Day, nonpronouncements), horror over his firing of an Obama Justice Department appointee (who would have resigned anyway), agonizing about Russian influence, ridicule of the absurd claims that the media suppress reports of terrorist attacks, and triumphalist predictions about when the impeachment proceedings against him will begin.

But we need to listen to the message that Trump is actually sending—because out there in flyover country, the radar is picking up something quite different. I just spent a week in Youngstown, Ohio—a traditionally Democratic part of the country that has been losing jobs, income, and people since the steel mills shut down in the 1970s. Trump carried the Mahoning River Valley—comprising Trumbull and Mahoning counties—by 8,000 votes. Barack Obama won both Rust Belt counties in 2008; four years later, his margin was 58,000 votes. To those people—voters who embraced “Hope and Change” in 2008 and kept that faith in 2012—Trump’s signal is coming through loud and clear: jobs for American workers, borders for foreigners, and government that refuses to play by the polite corporate rule book that left their communities to rot. We may be repulsed by Trump’s language and horrified by his actions. But these voters see a president who, unlike mere politicians, does in office exactly what he said he’d do on the campaign trail, from bulldozing the TPP to building that wall. We see a buffoon, a pussy-grabber, the Cheeto in chief. They see a man who keeps his promises.

And while the Democratic Party devours itself in a civil war between the Sanders Revolution and the Clinton Restoration, deferring indefinitely the crucial, substantive debate over inequality, Wall Street, and how to manage the economy, Trump tightens his grip on working-class voters—partly by pandering to their prejudices, but also by appealing to their interests, whether it’s infrastructure projects for the building trades or jawboning the Big Three automakers to produce more cars in the United States. (Though it was hardly covered outside the business press, Trump’s January 24 confab with the heads of Ford, GM, and Fiat Chrysler was big news on both sides of the Ohio-Pennsylvania border.)

Protest remains essential, if only to remind ourselves that we represent the majority. So too are actions in defense of Muslims, immigrants, and anyone else singled out by the new administration. But neither will be sufficient to defeat Trump. And both can be used to tie us up while Trump consolidates his power and strengthens the coalition that elected him—and that might well reelect  him, if we don’t find a way to peel off segments of his support.

Even if many people approve of Trump’s curbs on immigration, there are still plenty of potential wedges between the Republican Congress and working-class voters. The gap between Trump’s promises and the political costs of throwing 18 million people off health insurance has already hobbled GOP efforts to repeal Obamacare. Student debt, corporate welfare, climate change, and workers’ rights are all areas where real alternatives to Trump’s false promises could help the opposition cut through the noise.

Attending less to Trump’s words and more to his actions might also free up time to listen to the legitimate fears and grievances of his supporters, and to focus on the important thing: not whether potential allies supported Clinton or Sanders in the past, but on building a broad opposition now—and deterring the collaboration that bolsters Trump’s claim to effectiveness. Because while we giggle at Alec Baldwin on Saturday Night Live, Donald Trump could be laughing all the way to a second term.