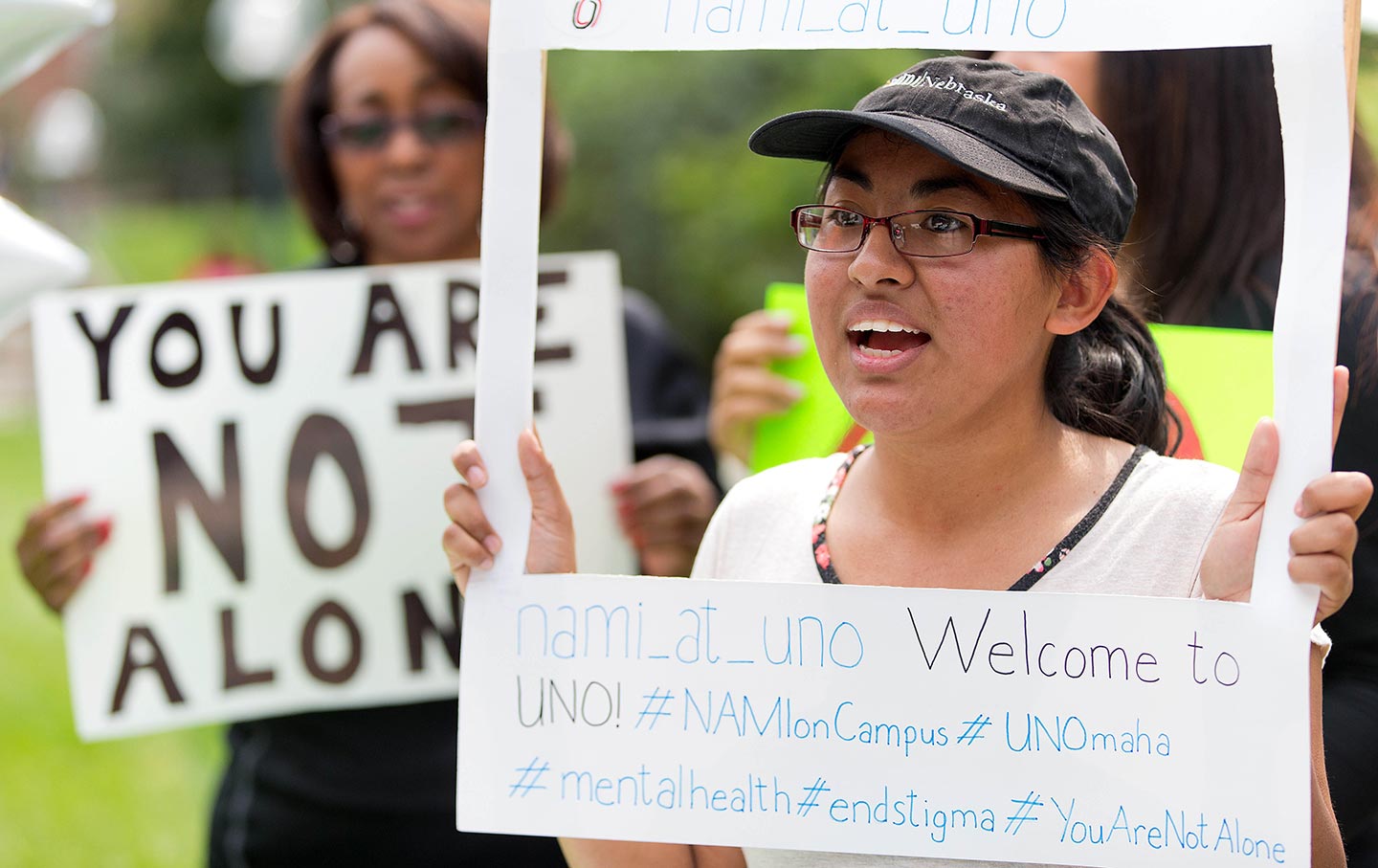 Students with the National Alliance on Mental Illness at the University of Nebraska's student involvement fair in Omaha, August 26, 2015. (Megan Farmer / Omaha World-Herald via AP)

“Have you ever just wanted to call in ‘black’ to work?” begins YouTube personality “Evelyn from the Internets” in her 2015 video “ Call in Black.” Being inundated with news about racial violence is overwhelming, she explains, cutting to a shot of her scrolling through news on her phone with an exclamation, “Wait—what?” In a voiceover, she explains: “Another unarmed black person assaulted and/or murdered.” Sometimes the weight of it feels inescapable—in moments like these, she proposes, you should be able to “call in black” like someone would call in sick. “The other day, when I was driving to work and I noticed water randomly pouring from my eyes, I realized something,” she says. “I was grieving.”

Evelyn addresses something that many students of color frequently face. During my freshman year, when Black Lives Matter was gaining prominence, it was hard to focus on student life while people who looked like me were being killed—all while dealing with other issues in my life. I found myself unmotivated, not interested in class or work. Since then I have limited the protests and activism I engage in because I feel as if I can’t invest that amount of emotional energy and still function as a normal student, much less a normal human.

I felt the same when Trump was elected, and, in a rare moment, I could see the rest of my campus felt it too. The day after the election was a collective day of mourning. Students on campus weren’t expected to come to class; teachers needed time for themselves, too. While it was comforting to know that my teachers understood in this instance, I noted that this hadn’t been the case in the wake of yet another violent, systemic, widely publicized murder of a black person.

When any student enters college, they are forced to grapple with time management, homesickness, identity, and much more. But these difficulties radically deepen when you overlay things like racism, classism, and homophobia. Dealing with systems of oppression can cause fatigue in ways in which a student of color’s white peers find hard to relate. “It was harder to find support specifically for race-related concerns,” said Jane, a senior at Harvard College diagnosed with clinical depression and anxiety whose name has been changed because she felt uncomfortable revealing her identity. Feeling isolated, she said, only “made other mental-health issues worse.” Mental health can affect everything from your GPA to your ability, or will, to maintain yourself and stay healthy. It’s a vicious cycle: The stress of college negatively affects a student’s mental health, and a student’s mental-health problems make the stress of college worse.

Even without mental-health issues, students of color are frequently dogged by impostor syndrome, wherein they question whether they belong in the first place. “As someone from South America, and seeing that the majority of students here are white and rich, I feel like I don’t fit, and I feel less than them,” said Jack, a sophomore at Harvard College whose name has been changed, mentioning the difficulty he has as a student. “Every day it reminds me of how foreign I am, not only because I’m from South America but also intellectually, and class-, and color-wise.” Rebekah, a senior from John Jay College, said that as a first-generation student, she had to figure out by trial and error how college worked. She said she’s been to three different colleges, transferring twice. “I’m turning 27 on June 16 and the average age of my classmates is 21. Things I didn’t know at their age I’m starting to get now. It fuels my anxiety. It adds a little bit of insecurity,” Rebekah said. “I feel like I’m behind. It’s always lingering in the background, even if I am ahead of them. No matter where they are, I still have this thing in my mind that I am behind.”

Poor mental health can make it difficult to get out of bed, to eat, to shower, to socialize. When I spoke with students, they noted how they often needed extensions and found themselves struggling to focus on their work. In order to get these extensions, students must communicate with their professors, other teaching staff, their deans, or any other offices that deal with accessibility, leaving it to the discretion of the professor or teaching staff to decide whether the student’s mental health warrants an extension. Some are more than willing to work with students, but others are not. Some students find themselves prioritizing their GPA over their health. They get less sleep. They miss meals. They do whatever needs to be done to get the good grade, often at the expense of their health later. Rebekah noted that anxiety “propels me, but it also stifles me.”

All this feeds into students’ feeling defeated. “After experiencing such intense depression and anxiety, I don’t really see the point of caring that much about my GPA,” said Susan, a student at Rensselaer Polytechnic Institute diagnosed with depression and anxiety, whose name has been changed because she felt uncomfortable revealing her identity. As a student of color dealing with mental-health issues, you are forced to choose to either delay your wellness and health or push yourself to be a high achiever and excel. “Every day is a struggle, a battle that I have to win,” Jack said.

Support systems, like a student’s family, are crucial to overcoming mental health obstacles. But, according to Dr. Joy Harden Bradford, creator of Therapy for Black Girls, for many people of color and for black women in particular, one of the largest barriers to seeking help is their family. “Some students have grown up in pretty religious homes and have been taught that prayer will be able to take care of any struggle they’re having, so coming to therapy is often not sought out until a situation reaches crisis level,” she said. Denise, a junior at Harvard whose name has been changed, said this was her experience growing up —depression was something you prayed away. Even more, her family didn’t see any reason for her to be unhappy. She had too much for which to be thankful. “‘What are you traumatized about? You did not escape as a refugee. You are here at this institution where resources should be available to you. You should be happy you got it. So no, you can’t be unhappy. That’s relative. You need to learn to be happy,’” Denise said, paraphrasing her family’s reaction to her depression. Susan noted that mental health was not understood among her more traditional family members. “Feelings aren’t discussed,” she said. “With some of my more traditional Asian family, they don’t talk about their feelings, ever. There is not even a little laughter in their interactions with me.” Jane said that, even though she was open with her parents about her mental health issues, their lack of understanding caused them to question her treatment, asking, “When are you going to go off your meds?” or telling her, “Your therapist is paid to advise you; they don’t necessarily want you to get better.” Their resistance made treatment more difficult. “Therapy and meds both happen to be something that really helps me cope with what I go through,” Jane said. “It’s really frustrating to hear from my parents that I should be skeptical of my therapist and psychiatrist. I have enough trouble trusting my own judgment.”

Campus mental-health resources do exist, but they are often understaffed and under-resourced, with students reporting they feel like they have to jump through hoops to have their concerns met. And as in most workforces, people of color are under-represented among mental-health-care professionals. In 2015, of all psychologists in the US workforce, 86 percent were white, 5 percent were Asian, 5 percent were Hispanic, 4 percent were black, and 1 percent were multiracial or from other racial/ethnic groups. “To get all the benefits that they offer, you have to fight for them,” Rebekah said. These resources should be available to students readily—in situations of mental health, timeliness can literally be the difference between life and death.

So where do we go from here? Speaking specifically about black women’s mental health, Bradford said there’s a lot that institutions can do to offer better support—“having spaces for black women to gather; having black women as staff members in support offices like the Counseling Center, Health Center, Tutoring Center; and taking complaints of harassment seriously when they are filed,” she said. Some schools have taken the initiative to improve their mental-health resources for students on campus. At the University of Wisconsin–Madison, University Health Services have met with minority-student groups to help alleviate the barriers they feel with accessing mental-health services. At Boston University, a program called NITEO was started to teach coping skills to manage mental health conditions to students who take leaves of absence from college, so that they will one day be able to go back to school. The National Alliance on Mental Illness has created talking points and guides to help both students and parents navigate mental illness and talk about it.

As conversations about mental health become more commonplace on college campuses, families, students, and administrations have to find ways to properly help all students. Until new and improved protocols become the norm, students will continue to feel alone in their struggles to get by. “The combination of feeling like I can’t talk about my mental illness at home because of the cultural taboos of it, mixed with feeling like mental health isn’t talked about at all in the black community, sometimes makes me feel isolated,” Denise said. “And that’s a horrible feeling.”