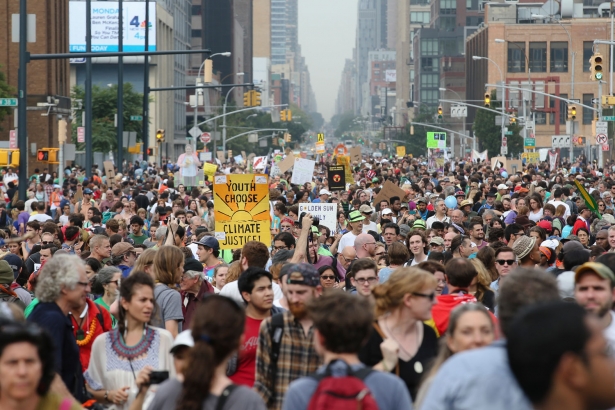 When it comes to halting climate change, many of the people expected to be leaders instead bury their heads in the sand. More than 130 Republicans in the House of Representatives deny the basic science of global warming; many other elected officials acknowledge the world is changing in profound and dangerous ways, but aren’t inclined to do anything serious about it.

For now, those leading on climate are ordinary people; kids and grandparents and workers who have a greater interest in a habitable planet than in securing campaign cash. Hundreds of thousands of people filled the streets of New York on Sunday for the appropriately named People’s Climate March, calling for an end to political inaction.

Still, it is possible to find commitment to climate justice in corners of the US Capitol, and there were elected officials among the other marchers in New York on Sunday, including Vermont Senator Bernie Sanders, and Minnesota Representative Keith Ellison, the co-chair of the Congressional Progressive Caucus.

The march left no question about the passion and diversity of the climate movement. So what happens next? On Tuesday, I spoke with Ellison about the significance of Sunday’s action, his idea for funding the transition to a sustainable economy, and converting climate activism into political action.

The conversation has been edited for length and clarity.

Zoë Carpenter: What was your experience like at the march?

Representative Keith Ellison: I was exhilarated. You know, I just was so elated to be around such tremendous energy. People from truly all walks of life, all united in the idea that we have to take climate action.

I met one guy who was an AIDS activist, and he was telling me how his whole life had been dedicated to helping people who were living with AIDS have greater justice, more access to healthcare and housing. But, he said, “I’m into this thing because, hey, if the climate burns up the planet, makes it uninhabitable for humans, my main issue we can’t do anything about, right?”

I was talking to some folks who were concerned about Ferguson and Trayvon Martin who had something similar to say: “This is our key issue, but if the climate is wrong, then it’s all wrong.” There were some labor folks there who said, “Look, our issue is better pay and working conditions for working people, but if there’s no habitable earth to live on, then there ain’t no jobs.” For many people, maybe the environment and the climate is their main thing, but for many people it was not their main thing. But they understand the centrality of it.

One lady pointed out something that was really interesting. She was with the nurses, and she was pushing for financial transactions tax—a bill I’m carrying in the House—and her point was, “Look, we’re nurses. We want climate action now because we know respiratory illnesses and a whole lot of other problems flow from greenhouse gas emissions and the air quality.” And she said, “If we pass a financial transactions tax, we will be able to fund the expense of converting from this status-quo fossil-fuel economy into a renewable one.”

I saw a lot of people making important connections, working outside of their silos, but all united in this idea that we need climate action. Lots of people of color, a lot of women, a lot of older people, a lot of teenagers—you know, just all kinds of folks.

Did anything surprise you about the march?

I was surprised at how people really seemed to grasp the interconnectedness of everything that’s going in to the issue of climate. No matter what occupies most of their time, they get it.

Related to those interconnections—you mentioned labor. I know you’ve been a big supporter of striking fast-food workers and other labor organizing. But there’s an assumption, often, that labor and environmentalism are opposed. What’s the significance of linking climate and labor activism?

It’s essential. If you look at the narrative of climate deniers, they always seem to say, “Well, jobs are what it will cost you if you want a healthy environment.” The people who are always trying to push the Keystone pipeline, or always more drilling—the “drill now, drill later” people, all these people—they are always telling us that jobs are what are at stake.

So it is essential that labor and environment be in dialogue and be looking for opportunities to operate cooperatively so that we can make it clear to everybody that there are great, well-paying union jobs that are environmentally friendly. And that people in the environmental world who are pushing for action on climate are aware of the fact that people have got to make a living. That’s our challenge, to convert to an economy that is zero-waste, that is not emitting CO2 gases. We can’t meet the challenge unless we’re in some sort of dialogue, and some sort of partnership.

You mentioned the Robin Hood tax. Can you explain a little bit more about it, and how it’s related to climate change?

Well, the Robin Hood tax is a good idea in and of itself, without regard to anything else. But it fits into the climate change argument because we do need to move around and we need energy sources that are green and renewable to do it. That takes money. We do need to turn the lights on.

So how do we convert? Where are we going to get the money? Well, I think that Wall Street helping to pay for the conversion is incredibly appropriate. I mean when they screwed the economy in 2006, ’7, and ’8, the American people, right or wrong, bailed them out. Well, we’re in a climate mess—what are they going to do? They did good in America. Are they going to do well by America, is the question.

My bill, the Robin Hood tax, is very simple: a small tax on stocks, derivatives, and bonds. You put it all together, it raises about $300 billion a year. We can use that money to make the conversions we have to make, retrain people that we have to retrain, invest in industries we need to invest in. They money is certainly available to make the changes that need to be made.

Besides legislation like that, where do you think that the climate movement should go from here? Now that there’s been a huge show of public support for action, how do we translate that into political movement?

We need to convert that energy into political dividends. I think that we need to create a political climate in which being pro-climate is highly beneficial, and being anti-climate action is detrimental. So that’s what we have to do. We need questionnaires to go out. We need candidates to answer questions about where they stand on climate action, about where they stand on carbon taxes, and stuff like that.

We need people who want to run. I bet you there were people at that march on Sunday who feel like, “You know what, I never thought electoral politics had any answers for our society.” But if we’re going to have a green economy, if we’re going to have an economy that takes climate action, it’s going to take people who are in office. Somebody’s got to be in office—will they be climate activists or not?

Is that how we might define success of an event like the march—that it produces self-sustaining leadership?

That is one way, but there are many other ways. One way to define success is that it generates people who will offer leadership. Another way is that it will generate an electorate that is educated and mobilized around climate action. For the people who are in office now, we’ve got to make them understand that your action on climate is not going to hurt you. In fact, it might actually help you.

I met a woman from West Virginia, and she was fired up about climate action. And she lives in a state where the special interests—you know, they’re not too concerned about people dying in a mine cave-in, and they’re not too concerned about people not being able to drink the water, but they’re always messaging that if you don’t do everything that the mining industry, the coal industry, wants, then you’re not for jobs.

Well, people like her are getting inspired by those 400,000 voices that were assembled in New York, right? These people are getting more courageous. They’re getting a little bolder. They’re creating a political mandate.

So there are a lot of ways [to define success]: leadership, electorates. People get stronger and bolder and little bit more creative. And then you get people who are working together, who are talking and exchanging ideas, and their creativity feeds off each other. So you may have some new movements, based just on the collision of great ideas that came together at the march.

Marches like this are really important, but a lot has to do with what happens after the march. The president, for example, has been thinking about a year of action, as we have this deadlocked Congress and it’s so hard for us to pass anything. Will the president feel like, “Hey—I’ve got a mandate to take climate action now”?

And then, of course, this was an international movement. You have people in Istanbul, and Lisbon, and all over the globe taking action at the same time. It helps fuel what’s going to happen in Paris next year [when signatories to the United Nations Framework Convention on Climate will meet], and at all these important international events where we need the whole world to cooperate. The leaders in China and India and Brazil are watching this, too.