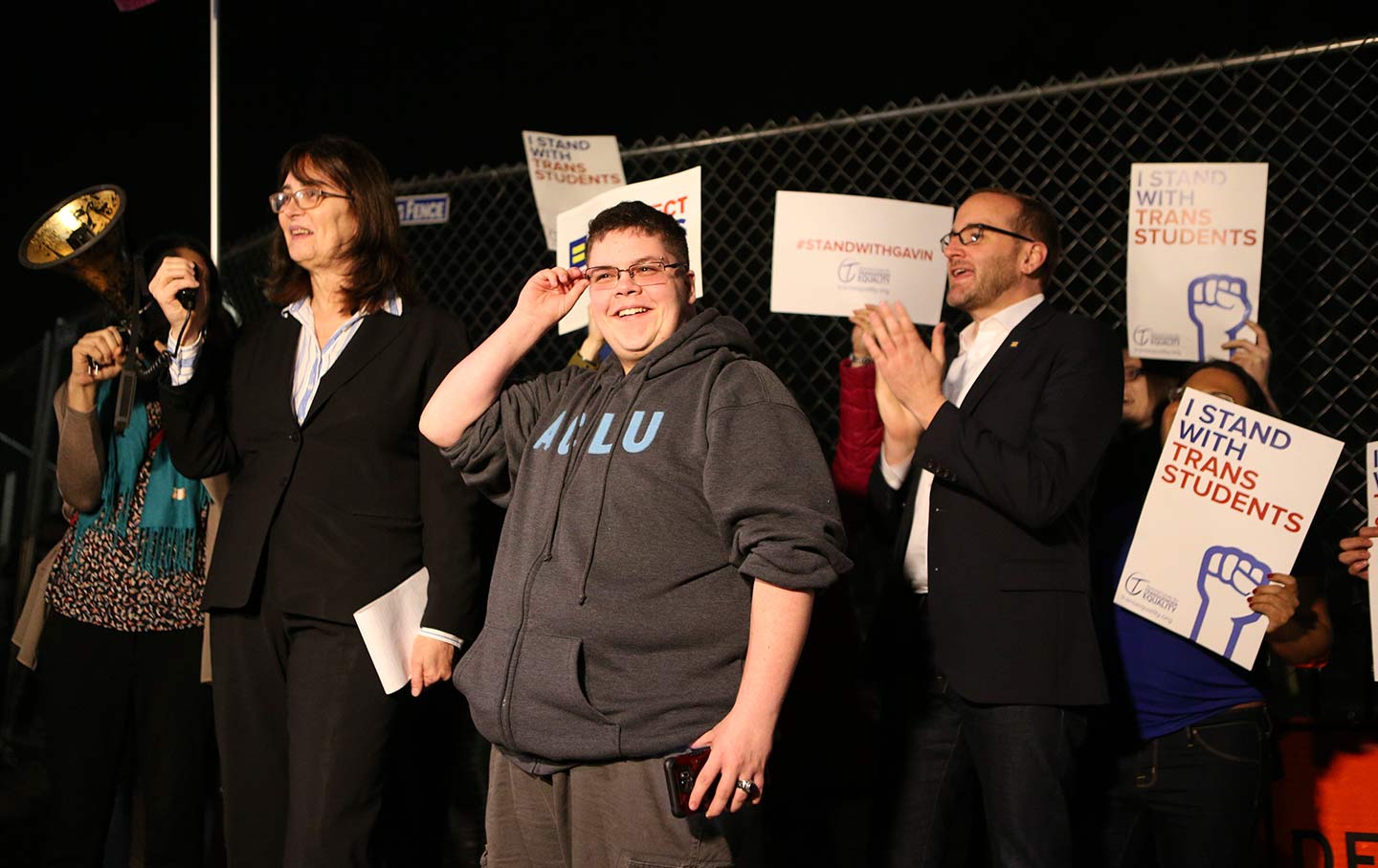 Gavin Grimm joins a protest outside the White House in support of trans students on February 20, 2017. (Sipa via AP Images)

Yesterday’s news that the Supreme Court would be sending Gavin Grimm’s case back to a lower court without ruling on it seemed to deal a heavy blow in the fight for transgender rights. The case, in which Grimm is suing the Gloucester County School Board for barring him from using the boys’ bathroom, was a beacon of hope, particularly after Donald Trump revoked federal guidelines allowing students to use the bathroom corresponding with their gender identity. G.G. v. Gloucester County School Board would have been the Supreme Court’s first ruling on transgender rights; an opportunity to establish landmark legal protection for trans students under a president who has opened the door to discrimination against them.

For now, that will not happen. Grimm’s case will return to the Fourth Circuit, which previously ruled in his favor, where the question of whether Title IX protects him and other trans kids will be reconsidered in light of the removal of the guidelines.

But though the decision is a setback—and has serious, urgent ramifications for trans kids, whose safety and security hang in purgatory while the case idles—Grimm’s case, and the many others making their way through the courts right now, should continue to be a source of hope, and not a fantastical one. We’re still on the road to winning federal protection for trans people, and soon. As Joshua Block, lead counsel for the ACLU on Grimm’s case, said yesterday: “This is justice delayed, not justice denied.”

The first piece of evidence that suggests that, in the long game, trans rights are winning is that courts are consistently ruling in favor of them. In five of the six rulings on bathroom cases in the last year, including Grimm’s, district courts have found in favor of trans kids. (A plaintiff in one of those cases, Juliet Evancho of Evancho v. Pine-Richland School District, is the sister of Jackie Evancho, the teen pop star who sang at Donald Trump’s inauguration.) A survey of the case law confirms the same, says Block: In recent years, a majority of courts have found that discrimination against transgender people violates both Title IX law and the equal-protection clause. The fact that the case has been remanded to a lower court is not unusual—as Amy Howe writes at SCOTUSblog, “the justices often prefer not to weigh in on a question that a lower court has not fully vetted.”

But it’s not just legal precedent that suggests Grimm, and other plaintiffs like him, are headed for victory. Last week, amicus curiae briefs in support of Grimm poured in from around the country. The groups lined up behind Grimm represented an incredibly broad swath of American life, ranging from teachers’ unions to medical professionals to law-enforcement officers to business leaders. Nearly 2,000 clergy representing Baptists, Presbyterians, Catholics, Muslims, Jews, and numerous other religious denominations signed a brief advocating for Grimm. So did almost 200 members of Congress—more than twice the 80 who filed on the side of the school board. Eighteen states, plus the District of Columbia, filed their own brief registering their support for Grimm’s case. And Apple, Microsoft, eBay, and Twitter were among the 53 corporations listed on a brief stating unequivocally that “treating transgender people with the dignity and respect they deserve is simply the right thing to do.”

As transgender writer and actress Jen Richards put it during a media briefing last week, “The fight for cultural legitimacy has largely been won.”

Courts, of course, are not beholden to cultural legitimacy, and have ruled against the tide before. But climate matters. And at this point, the climate is clear: History is on the side of Gavin Grimm, and the shrinking group opposing him is beginning to look less and less like advocates for “family values,” and more and more like a fringe crowd of intolerant outliers who want to bully other people’s children and may find themselves increasingly isolated by that position.

There’s one more reason to take heart despite the Court’s decision not to hear Grimm’s case this term, and that’s the example of gay marriage. In 2012, just three years before same-sex marriage became the law of the land, 30 different states had constitutional bans on gay marriage. Activists had been waging a strategic battle to legalize gay marriage through the courts since the early 2000s, and more broadly since the 1970s. As late as 2012, with the majority of states explicitly banning same-sex marriage, it seemed they hadn’t gotten very far.

But in 2013, the Supreme Court struck down part of the Defense of Marriage Act, ruling that a federal ban on same-sex marriage was unconstitutional. The next year, several federal courts struck down state bans on gay marriage; the Supreme Court, in a move that should sound familiar to those following Gavin Grimm’s case, declined to rule on the question. Then as now, the Court seemed to be waiting for the issue to make its way through the federal courts. Change came swiftly—challenges to the remaining gay marriage bans surged, and in June 2015, the Supreme Court ruled in Obergefell v. Hodges that same-sex couples had a constitutional right to marry. By that point, there were only 13 state bans left.

The Court’s decision not to rule on Gavin Grimm’s case is a terrible disappointment, and one with dire, dangerous consequences for the trans kids who will be forced to fend for themselves. Grimm reports he is “avoiding the restroom whenever possible,” and using the nurse’s room when absolutely necessary. (Last year, one in three trans people reported that they curtailed their eating or drinking in order to avoid using the bathroom.)

But it is not the end of the road. We’re exactly where we need to be to win this fight. And Gavin Grimm is ready.

“Obviously this is not what we wanted and it’s disappointing that it’s going to drag this out even longer,” he said yesterday. “But I’m still as passionate and as happy to be doing this as ever. I think that everyone is just as empowered and ready for it as we’ve always been. If it took ten years, I’d stick with it.”

Luckily, all the evidence suggests it won’t take that long.