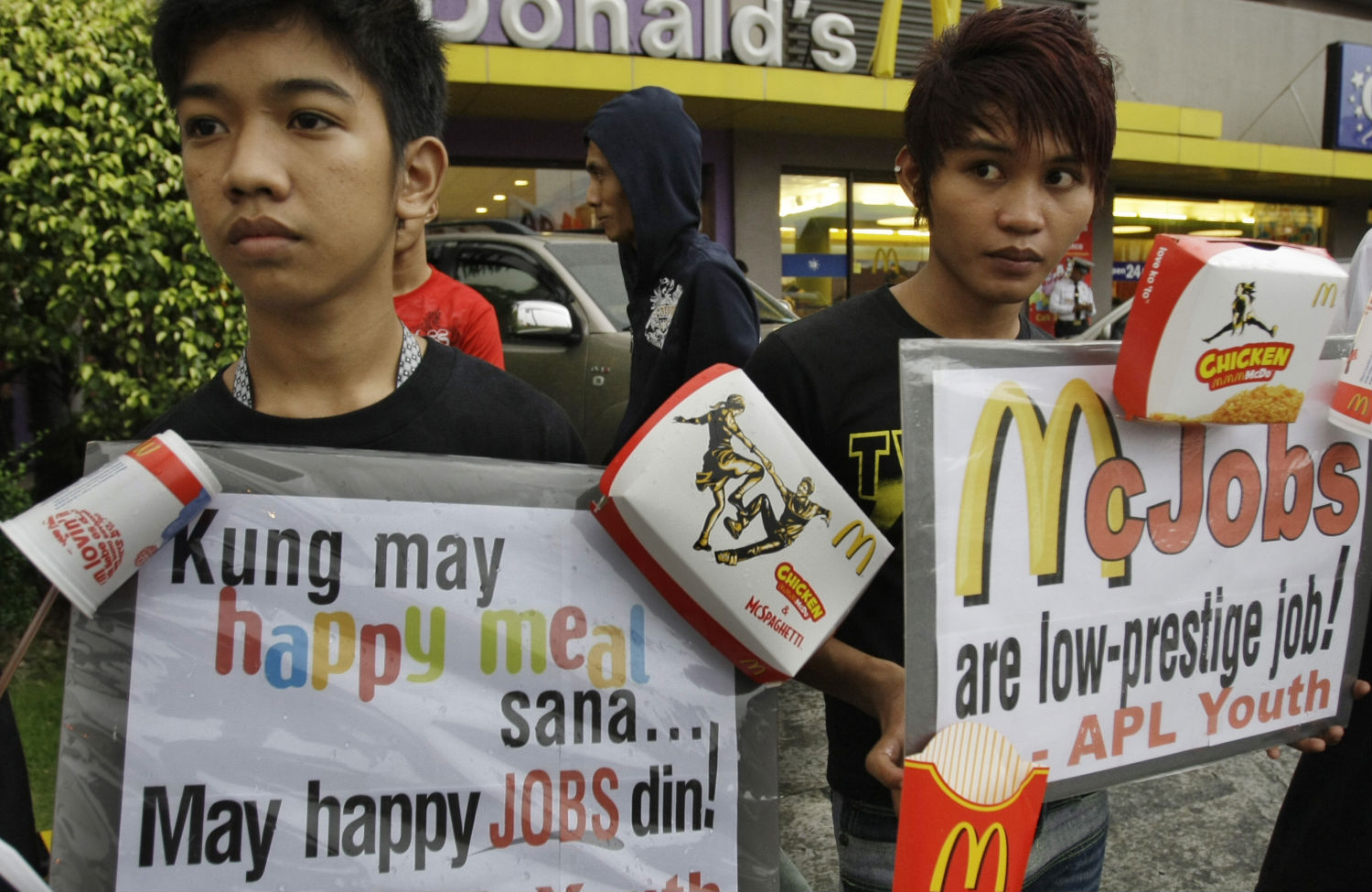 The fast-food workers’ movement has exploded in size and reach over the past year with strikes and protests in dozens of cities. The movement seems to encapsulate rising public disgust not just with the workers’ low wages but with the entire fast-food industry, which runs on an ugly feedback loop of poverty wages, junk diets and commercial exploitation for both consumers and workers. But now the fast-food workers’ campaign has “gone global,” spreading to parts of the world where fast-food logos project a different image, one that ranges from an imperialist corporate hegemony (Manila) to a respectable career (Copenhagen). Now the “Fight for 15” activists are touring different cities to explore how fast food goes down around the world.

In recent days, American fast-food worker activists have embarked on a tour spanning eight countries to share their stories with fellow workers and exchange ideas on organizing locally and globally—mounting a populist challenge to an industry that generates hundreds of billions of dollars worldwide.

Fight for 15 workers from Los Angeles, Albina Ardon and Moses Brooks, have met activists with the SENTRO union in Manila. The union is organizing a youth-led fast-food worker movement targeting McDonald’s, KFC, and the leading Filipino fast-food chain, Jollibee. The group has called out the “short-term and unprotected work arrangements” prevalent in the industry, particularly the so-called “5-5-5” temp-job system (a model familiar to many American workers), in which “workers are endlessly hired and fired every five months to prevent them from becoming permanent or regular workers.” Aiming to build a national fast-food labor organization, the workers counter the narrative that Westernization via fast-food brands marks a step up for a developing nation. They point instead to the unsavory reality of the global food system, which markets cheap treats to a poor country, to keep their workforce even cheaper.

One worker in Quezon City described an experience as a low-wage worker that paralleled the plight of her US counterparts. But she earns less than $1.50 an hour—that amounts to a fraction of the average monthly wage in the Philippines—struggling to support an eight-person household.

“I remembered when I started working, my salary was for my tuition fee, but now I cannot afford to save because even my salary cannot meet the daily expenditures of my family,” she said in a testimony to SENTRO.

In a comment to The Nation recorded by SENTRO, a young Quezon City Jollibee worker says, “Prices of electricity, water, food, transportation are rising. Our salary is not really enough to sustain our needs in the family. There were times that our salary was delayed for four to five days, and that was agonizing.” Inspired by the stories of the US activists, he adds, “The government should create pro-worker policies, not policies just for the benefit of company owners. But of course, it will [only] happen if we are able to strengthen our ranks as fast-food workers together and in solidarity among workers from different industries in the country and even the workers’ movement around the world.”

Globally, the labor struggles are as universal as the Golden Arches. Fast-food worker activists have also visited with workers in the UK, who have campaigned against a similar pattern of precarious contract work and erratic schedules.

They’ve reached out to young workers in Tokyo who are fighting to improve conditions at fast-food outlets. Japanese workers have targeted the local chain Sukiya, which reportedly follows the American recipe for McJobs by undermining the union rights of part-time workers. That labor conflict dates back several years—a sign that global labor struggles have been roiling in this industry since well before US workers launched their campaign.

And in many ways, the US fast-food initiative lags behind service-worker labor movements in other countries: here McDonald’s workers are waging a legal battle merely for recognition as full employees of the company. And despite the backing of SEIU, the movement still faces a Sisyphean struggle ahead before even approaching the scale needed for mass unionization.

Francis Cabrera, a McDonald’s worker from Buenos Aires, came to a Chicago protest in September to represent a swath of the fast-food workforce that already has solid union rights. “I’m here to support my brothers and sisters in the United States,” she told People’s World, “and to say that if we can have a union in Argentina they should be able to have one here in the U.S. If you work for McDonald’s in my country you are also in the union and you get paid sick days, vacation, holidays, maternity and paternity leave and profit sharing. Why not the same for my brothers and sisters here?”

Danish workers also puzzle over the paradox of McPoverty in one of the world’s richest nations. Serving Happy Meals can be a solid career in Copenhagen, with a living wage and full benefits. Of course, none of their compensation comes simply from corporate noblesse oblige: it’s the product of a multi-year labor struggle led by a strong union.

After hearing New York City workers Alvin Major and Flavia Cabral speak of their struggle to get by on poverty wages, Danish McDonald’s worker Louise Marie Rantzau remarked to MetroExpress, “It’s crazy to see how people struggle to cover the general cost of living. Suddenly, I’m very happy with my job.”

Now workers like Rantzau are lending solidarity to the global movement. Last May, ahead of the first international day of action for fast-food workers, she reminded her fellow activists in a Reuters commentary, “McDonald’s didn’t give us our union. We had to fight for it.”

The Danish workers’ global demand—“the right of employees in all countries to organize and speak for themselves”—attests to a basic principle of labor organizing: real advancement for workers comes only through collective action, and solidarity builds only by lifting everyone together.

Massimo Frattini of the IUF (International Union of Food, Agricultural, Hotel, Restaurant, Catering and Allied Workers’ Associations), which is helping coordinate the tour, said in a statement announcing the US fast-food workers’ program, “we need to have a strong, global movement of workers pushing for better wages, better treatment and better rights… Their mobilization offers an opportunity to transform the industry in many parts of the world.”

US workers face a long road ahead before they win a living wage and a union, but they’ve already managed to combat the popular stereotype that fast-food jobs don’t count as serious long-term work and low-wage workers just aren’t worthy of a good job. Activists overseas have shown that a different kind workplace is possible, and that American fast-food workers deserve jobs that are worthy of them.