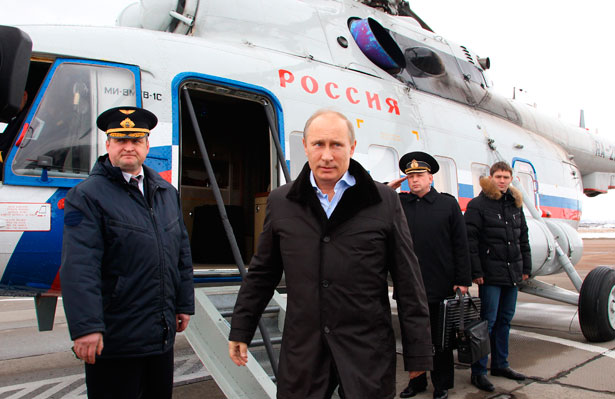 UPDATE I: As predicted, President Obama is under heavy pressure from the right and from members of Congress to take strong action immediately to confront Russia. The New York Times summarizes the pressure, but it’s coming from many directions: Senator Bob Corker (R.-Tenn.), Senator Marco Rubio, who’s trying to build his thin foreign policy credentials, from John McCain, the NATO expansion advocate, and many other hawks and neoconservatives. The way it’s being posed is: Obama has supported diplomacy with Iran and Syria, he’s cut the military budget, and he’s generally weak in regard to Russia and China, so he’s reaping what he’s sowed. That’s ludicrous – but, when the pressure starts to include Kerry, other administration officials, and perhaps (let’s see) Hillary Clinton, then Obama might, against his better judgment, opt for a more confrontational stance. The statement from the Foreign Policy Initiative goes so far as to advocatean “emergency NATO meeting” and  “forward deployment of NATO forces in the former Warsaw Pact countries.”

Speaking to the American Israel Public Affairs Committee today, McCain accused Obama of having a “feckless” foreign policy – feckless meaning, in this case, not invading other countries. The crisis in Ukraine, he said, “is the ultimate result of feckless foreign policy where nobody believes in America's strength anymore.”

ORIGINAL POST Vladimir Putin, Russia’s autocratic president and would-be reviver of Russian greatness, must back down.

Unfortunately, Russia’s jingoistic media is hyping the threat to “Russians” and “Russian-speaking” Ukrainians, they’re playing up pro-military demonstrations by “patriotic youth” and other Russians—even as security forces in Russia arrest antiwar protesters—and they’re reporting on the happy “tea and sandwich brigades” helping out in now-occupied Crimea. In one absurd passage, RT reports:

Russia’s biggest bikers’ club, the Night Wolves, has staged a major motorbike rally in the capital in support of Russian speakers in Ukraine. Despite the fact that the motorcycle season hasn’t yet kicked off, over 100 bikes participated in the rally.

In response to the concern shown by Obama about the plans for the possible use of Russia’s armed forces on the territory of Ukraine, Putin drew attention to the provocative, criminal actions by ultra-nationalists, in essence encouraged by the current authorities in Kiev…. The Russian President underlined that there are real threats to the life and health of Russian citizens and compatriots on Ukrainian territory. Vladimir Putin stressed that if violence spread further in the eastern regions of Ukraine and in Crimea, Russia reserves the right to protect its interests and those of Russian speakers living there.

The trick for President Obama and Secretary of State John Kerry is to create a face-saving way for Putin to accept the fact that Ukraine, including the disputed Crimea, isn’t Russia’s any longer, and neither the Russian empire nor the Union of Soviet Socialist Republics exists any longer. And the venue has to shift to the United Nations.

Russia’s actions, so far, indeed amount to acts of war. Its troops have invaded Ukrainian territory, and Putin—sounding like George W. Bush vis-à-vis Iraq—has asked Russia’s legislature for permission to use Russian troops throughout all of Ukraine. Memo to Putin: like Iraq, Ukraine is a sovereign nation, whose territory is inviolable. And Crimea, though Russia has legitimate interests there—its Black Sea fleet, after all, is based there according to a lease arrangement with Kiev—is part of Ukraine.

It may not be possible, at this stage, to resolve the crisis peacefully at all. It may be that nothing the United States can do, whether threatening Russia with economic sanctions and expulsion from the G-8, can change Putin’s mind regarding Ukraine. In that case, Russia will seize and consolidate control of Crimea, build support for broader Russian intervention in Ukraine’s pro-Russian east—the country’s industrial heartland—and back the ousted president, Viktor Yanukovych, or some other pro-Russian proxy as a vehicle for expanding Russian involvement into Ukraine’s west. In the Russian argument, the accord that was negotiated last month, which would have allowed Yanukovych to remain in power until new presidential elections were held, is still valid—which is utter nonsense. The change in Kiev is permanent, and the fact that it was so violent and chaotic is a testament to Russia’s overplaying its hand.

The fact that the United States has few, if any, real options to stop Russia doesn’t make Russia’s aggression any less ominous. Fact is, the fragile US-Russian relationship, which has been spiraling downwards for years, is critical to resolving several world crises: the civil war in Syria, the nuclear talks with Iran and the stabilization of Afghanistan after 2014, just for starters. If Russia expands its invasion of Ukraine, beyond what it’s already done, all that is at risk. And not just at risk: Russia’s actions in Ukraine could tip the balance in Washington sharply against President Obama’s recent, more pronounced shift toward diplomacy rather than conflict. With the president already under fire from hardliners and neoconservatives, as well as hawks within his own administration, Obama’s very inability to halt the Russian action in Ukraine could lead him to accede to the demands of those who, for instance, want to take military action in Syria.

It’s true that Russia has profound strategic and economic interests in Ukraine, and it’s also true that the United States, really, has none whatsoever. But that’s an argument for both Russian patience and American forbearance, since eventually the turmoil in Ukraine will settle into some sort of stability, and Russia’s overwhelming presence in the region will allow an accommodation in which Moscow, Washington and especially the European Union—and not NATO!—all can have relations with whatever government emerges in Kiev.

So far, Obama and Putin have had a least two tense and unproductive telephone discussions in recent days. Appearing on Meet the Press on Sunday, Kerry issued the starkest warnings yet about consequences if Russia doesn’t hold off. He said—and there was some question about this—that all of Europe’s major powers will join the United States is taking economic measures to isolate Russia unless the invasion is halted. And Kerry said:

He is not going to have a Sochi G-8. He may not even remain in the G-8 if this continues. He may find himself with asset freezes on Russian business. American business may pull back. There may be a further tumble of the ruble. There’s a huge price to pay.

Threats and promises of punishment to come are one thing, but if the crisis is to be resolved without catastrophic consequences in international affairs, then the United States and Europe have to offer some sweeteners to Moscow, too, at least in private. Incredibly, though, in his Meet the Press appearance, Kerry refused to rule out a military response to Russia’s actions, even though there is no credible American action to take and, if the United States did engage militarily, it would undoubtedly be the most serious event since the 1962 Cuban missile showdown. Still, Kerry said: “The last thing anybody wants is a military option in this kind of a situation,” and then added, “But.”

President Obama has made a series of statements on Ukraine, including the March 1 White House statement after speaking with Putin and his February 28 remarks on the crisis in Ukraine.

Obama’s remarks, in his February 28 statement, did in fact acknowledge Russia’s substantial interest in Ukraine:

I also spoke several days ago with President Putin, and my administration has been in daily communication with Russian officials, and we’ve made clear that they can be part of an international community’s effort to support the stability and success of a united Ukraine going forward, which is not only in the interest of the people of Ukraine and the international community, but also in Russia’s interest.

However, we are now deeply concerned by reports of military movements taken by the Russian Federation inside of Ukraine. Russia has a historic relationship with Ukraine, including cultural and economic ties, and a military facility in Crimea, but any violation of Ukraine’s sovereignty and territorial integrity would be deeply destabilizing, which is not in the interest of Ukraine, Russia, or Europe.

But the president needs to go further to outline how the crisis might be resolved, to Russia’s advantage and in the interests of the Ukrainians and world affairs, if and when Russia halts its military actions.