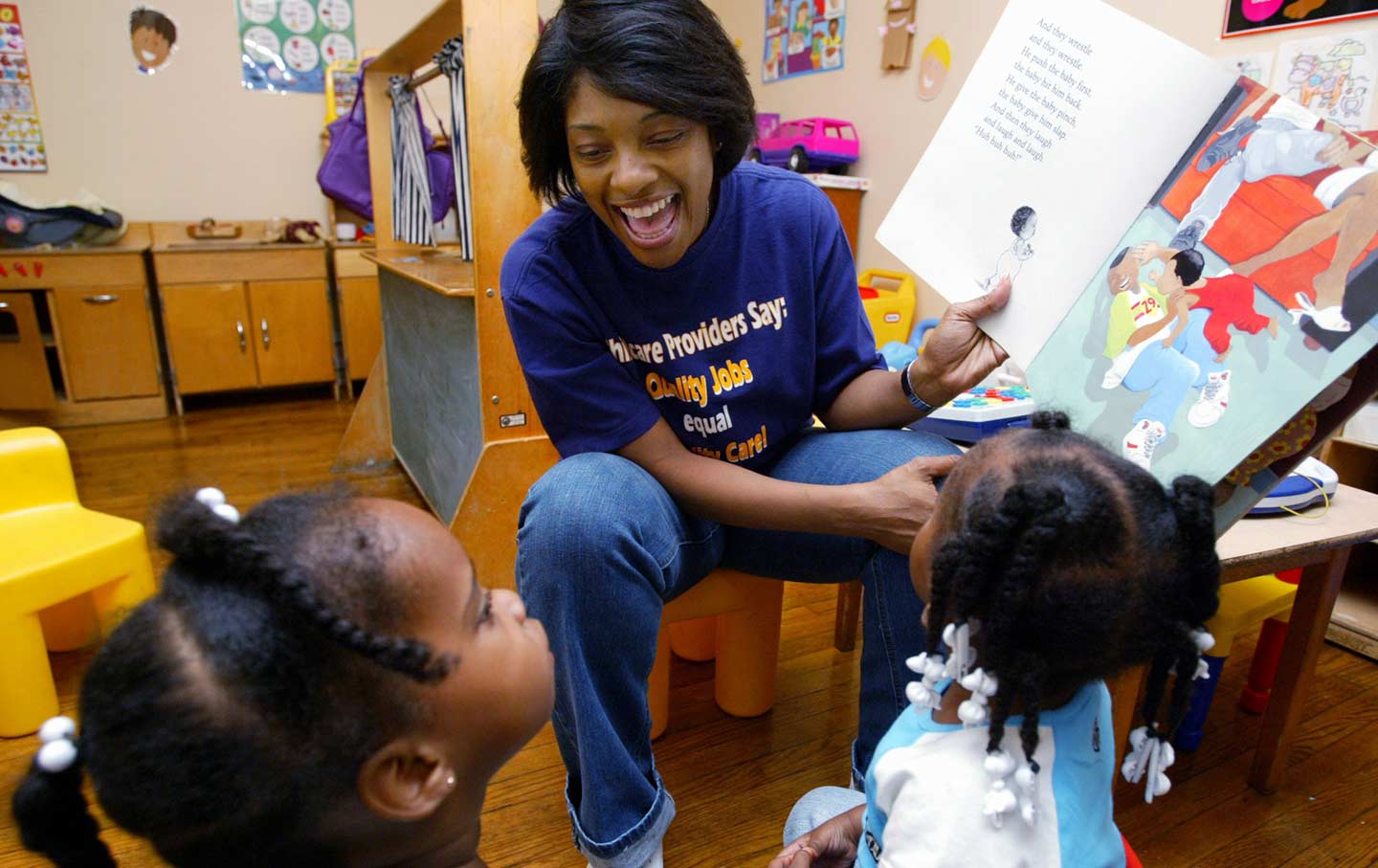 The starkest insult to women during the election season wasn’t the torrent of crass misogyny at the podium; rather, it was how little the supposedly “populist” campaign politics ignored the hardships burdening half the population. But women did win something on Election Day, when given opportunities to bypass the hateful blather and invoke direct democracy on key minimum-wage and child-care policies.

Cincinnati voters approved an initiative to boost school funding that directly invests $15 million into the expansion of universal preschool for about 6,000 children, covering the vast majority of citywide demand for services. It is funded by a modest property tax (residents decided preschool was worth raising taxes by $5 weekly on a $100,000 property).

Noting that the measure won the district by a 24-point landslide (larger than Clinton’s margin), campaign organizer Brewster Rhoads says via e-mail, “No question that in the midst of a victory for Donald Trump in Ohio and the country, the passage of a major initiative [to expand preschool and school funding] demonstrates that the voters understand the importance of education, not just for themselves but for the future of our community.”

The grassroots alliance backing the initiative, led by the United Federation of Teachers and AMOS, a faith-based network of racial-justice and community groups, established a “People’s Platform for Universal Preschool” through community outreach and public consultations, aimed at building a community consensus to ensure fair working conditions for providers (with $15-an-hour wages) along with quality and access for parents. The campaign linked labor and family in a way that resonated beyond campaign rhetoric, pushing early-childhood care as a social intervention, along with demands for criminal-justice reform and fairer wages. The proposal ensures 3- and 4-year-olds from the city’s distressed working families have an early pathway toward closing the education gap, while offsetting child-care cost burdens (about $6,000 to $9,000 annually) that ultimately limit parents’ work opportunities.

Dayton approved a landmark preschool expansion for 1,600 children through a small payroll tax costing about $1.60 a week for a worker earning $35,000 annually. The initiative, backed by a national labor-community coalition led by SEIU, American Federation of Teachers and community advocacy groups, was promoted through a grassroots canvassing effort covering tens of thousands of voters and won by a larger margin than Trump did in the county, so voters who might generally bristle at tax hikes decided their kids were worth the extra $1.60 a week on a $35,000 yearly salary. (It’s also cost-efficient for individual families, facing typical monthly daycare costs of around $179.)

In an otherwise shallow political sphere, child-care issues prompted questions on labor rights, gender equality, and economic fairness, making it one of the few social-justice issues that both Trump and Clinton directly engaged in their platforms. Trump’s proposals for work-family benefits were deeply inadequate, but at least offered a leverage point for future policy battles in Washington.

Whoever controls the White House, early-childhood programs are an increasingly critical social resource, a workforce and societal investment that can yield crucial socioeconomic gains across a child’s lifetime. Meanwhile, early child-care workers themselves represent a women-dominated sector intimately connected to the dual burdens of providing care and securing it for their own families. While the presidential race was a step backward for women, Election Day showed an unprecedented social consensus building around this core family and labor issue.

At a Fight for $15 town hall just before the election in Kansas City, Missouri, a young child-care worker from Florida, Dalya Mikel, framed her daily labor struggles in the context of hardships facing the community she served. She witnessed families grappling with unlivable wages every day, while her own early career path had been stalled by similar constraints.

“Too many parents that I know cannot send their children to daycare just because they cannot afford it,” she said, forcing parents into a cycle of being too poor to get a decent full-time job. Yet she herself struggled to survive on her dismal wages.

“It’s not fair. I did everything that I was supposed to, I worked hard, I finished school.” But after over a decade of working, she still had to move back in with her parents. “Don’t get me wrong,” she added, “I love my job and everything about it… I wish those smiles could pay the bill.”

For all workers and especially working women, lifting the wage floor is key to both closing the wealth divide and addressing gender and racial inequality—and voters said so at the ballot box in Arizona, Colorado, Maine, and Washington State.

Maine and Arizona approved a $12 phrased-in hourly base wage, along with a key family-focused benefit, paid sick days. Flagstaff, Arizona, will reach a citywide $15 hourly floor wage by 2021. Overall, minimum-wage measures have addressed the wealth divide not through shallow campaign-trail identity politics but simply by default: Women and workers of color tend to work lower-paying jobs.

The Maine and Flagstaff initiatives will also raise the tipped sub-minimum wage, which is based on the regressive assumption that casual tips can make up the difference. Washington’s minimum-wage hike, which follows several landmark local initiatives such as Seattle’s $15-an-hour base wage (which is about what it takes to support a four-person family in the state). Most of those earning below the proposed $13.50 floor wage were women, and over 40 percent were black and Latino. The tipped workforce includes some of the state’s poorest service workers; women in jobs like coffee-shop baristas and manicurists, which typically pay less than $9 an hour.

The concept of “One Fair Wage” advances a new national campaign led by the worker-advocacy group Restaurant Opportunities Center.

Nationwide, National Women’s Law Center estimates that raising the federal hourly minimum wage to $12 by 2020 would affect three in 10 women, roughly 40 percent of working single mothers. The new initiatives in early education and livable wages will last well past Trump’s first term, affecting an estimated 2.3 million people, adding $3.5 billion in earnings over the next six years.

If anything can put a supposedly populist administration to the democratic test, it’s the fundamental political questions driving the electorate’s economic frustrations: How do we give our children a better future?