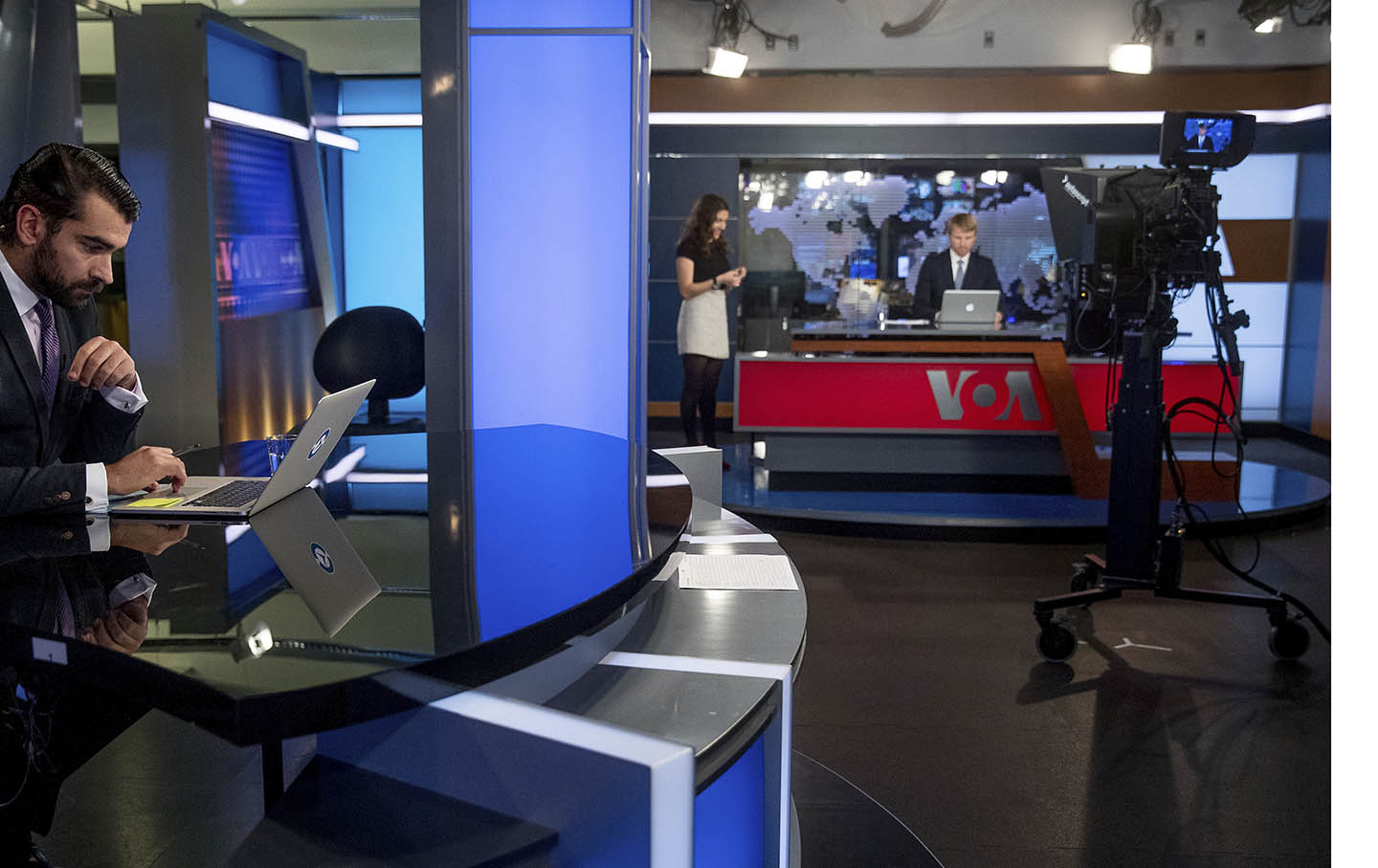 On the day before Christmas Eve last year, President Obama signed the annual National Defense Authorization Act, which this year included a $160 million revamping of the “Global Engagement Center” to combat what officials claimed was a uptick in Russian propaganda. Originally created in March of last year for anti-ISIL messaging, the Global Engagement Center distributes “counter” propaganda, social-media messaging, and original journalistic content. The revamp would—according to the author of the NDAA language Senator Rob Portman’s office—“increase the authority, resources, and mandate of the Global Engagement Center to include state actors like Russia and China.”

What isn’t clear is if the Global Engagement Center, with all of its new “authority, resources and mandate,” will be used to target American audiences or pay American journalists. In 2013, Congress repealed major sections of the 1948 Smith-Mundt Act, which had previously instituted a ban on the State Department and related agencies from “propagandizing” directly to Americans. The 2013 changes, which were first reported by the late Michael Hastings in Buzzfeed, led to much confusion at the time as to what the repeal did and didn’t do (some thought it deeply pernicious, others not so much). Subsequent attempts to clear up the current law on targeting Americans haven’t resulted in a clear consensus, a problem that’s becoming increasingly urgent as the US government doubles its efforts to combat the much-publicized Russian propaganda machine.

When asked by The Nation if the State Department was targeting Americans or paying American journalists, State Department spokesperson Nicole Thompson wouldn’t say they weren’t, only that, “the Global Engagement Center targets its messaging at foreign audiences abroad.”

When asked in two follow up e-mails if the Global Engagement Center would also target Americans and/or pay American journalists, Thompson did not respond. Similarly, Senator Portman’s office insisted the “focus and intent” was foreign audiences but would not respond to follow-up questions asking if the Global Engagement Center would specifically target Americans and/or fund American journalists.

The consistent line from the government is that the Global Engagement Center is targeting foreign audiences (which, of course, is widely assumed), but it won’t say it’s not aiming its efforts at Americans.

New York attorney Weston R. Sager, who authored one of the rare detailed legal breakdowns of the Smith-Mundt Act changes of 2013 while a student at Northwestern University School of Law, tells The Nation that the primary problem with the current rule set is that they are too vague and, above all, don’t require attribution—which is to say, the government is typically not obligated to disclose to the reader or viewer that the media they’re consuming originates from the US government.

“The government has almost free reign to anonymously speak to the American people,” Sager says. “There are sensible restrictions on how they do this and in what context but, from my research, even if they run afoul of these restrictions they often aren’t enforced. And when they are, it’s not enough to stop them from continuing.”

The Government Accountability Office, which is traditionally responsible for overseeing the limits of domestic propaganda, rarely sanctions the government for crossing the line. The last major instance of them doing so was when they went after the Environmental Protection Agency in 2015 for running social-media accounts encouraging people to back the Obama administration’s efforts to protect the nation’s streams and surface area. The GAO pushback–which was largely seen as a product of grandstanding by Congressional Republicans who instigated the probe–resulted in no fines or punishment of any kind.

One section of the Portman language in the NDAA raising eyebrows is the creation of a fund for “local journalists” to counter “foreign government disinformation techniques.” The bill reads:

The legislation establishes a fund to help train local journalists and provide grants and contracts to NGOs, civil society organizations, think tanks, private sector companies, media organizations, and other experts outside the U.S. government with experience in identifying and analyzing the latest trends in foreign government disinformation techniques.

When asked directly, neither Portman’s office nor the State Department would say whether or not this provision could include American journalists.

It’s worth noting that there are examples of the US government funding Americans reporters at present. The Russia-focused, English-language Interpreter magazine was funded by the Broadcasting Board of Governors (the official wing of State Department propaganda) throughout 2016 (their contract runs out this month), while the magazine’s Editor-in-Chief, Michael Weiss, was writing at the American publication Daily Beast and frequently appearing on American cable news network CNN.

The Daily Beast alone has regularly published three writers––Michael Weiss, Jamie Dettmer, and James Kirchick—who have worked for an organization funded by Voice of America or one of its subsidiary outlets. These writers’ association with US-government funded media was only revealed if one clicked on their bio page and happened to know that Voice of America was US-funded or The Interpreter was VOA-funded and that it, in turn, was sponsored by the US government. In the case of Kirchick, his Voice of America funding (which he claims was only $1,000) was not disclosed in his bio.

There are carve-outs in restrictions allowing for the State Department to target so-called “diaspora communities” in the United States but this, as well, is problematic. The example given by Adam Smith (D-WA), who co-sponsored the Smith-Mundt repeal in 2013, was the need to target Somali-American communities susceptible to propaganda from Al Qaeda–linked groups. As he argued at the time:

In 2009, the law prohibited a Minneapolis-based radio station with a large Somali-American audience from replaying a Voice of America-produced piece rebutting terrorist propaganda. Even after the community was targeted for recruitment by al-Shabab and other extremists, government lawyers refused the replay request, noting that Smith-Mundt tied their hands.

“What does that mean, ‘diaspora communities’?” attorney Weston Sager asks. “It’s unclear if it refers to certain ethnic groups or foreign nationals based in the US. The BBG is also not supposed to be ‘developing audiences’ within the United States. How do they reconcile that?”

A recent glowing profile on the Global Engagement Center’s “guerrilla marketing” targeting Facebook users against joining ISIL in The Washington Post may shed some light. While the article was mum on whether this program was appearing on American Facebook and Twitter feeds, it was quite clear the ads in question were in English and not disclosed as originating from the State Department:

The [anti-ISIL] video is one of several paid ads that are turning up on millions of cellphones and computer screens in countries known to be top recruiting grounds for the Islamic State. The ads offer a harrowing view of life inside the self-proclaimed caliphate, sometimes with photos or cartoons and often in the words of refugees and defectors who warn others to stay away.

Most of them make no mention of the ads’ sponsor: a small unit inside the State Department that is using guerrilla marketing tactics to wage ideological warfare against the Islamic State.

When fighting something broadly viewed as an unmitigated evil such as ISIL, this will likely ruffle few feathers. But with the GEC’s mandate expanding expressly to countering Russian and Chinese “propaganda,” how these institutions could quickly blur the lines into pro-government spin isn’t difficult to imagine. What about the legality of Russia’s annexing Crimea? The wisdom of China’s building islands in the South Pacific? What is true and false in the notoriously difficult-to-report-on Syrian war? What the average State Department PR rep may see as clearly defined “truth” worthy of spamming at English-speaking audiences won’t always be as simple as “don’t join ISIS.”

It’s not uncommon for laws created to fight terrorism to quickly expand in scope. For example, of 1,788 sneak-and-peek warrants issued from 2006–09 under the Patriot Act—the broad surveillance law passed six weeks after 9/11 nominally to combat Al Qaeda—only 0.85 percent were used in terrorism cases and 92.2 percent were for routine drug cases. What’s to prevent similar scope-creep occurring with our newly deputized government arbiters of what is and isn’t propaganda?

Since allegations of Russian meddling in the US election began to emerge eight months ago, the pressure to “counter” Russian propaganda and its allegedly existential threat to our democracy has risen in direct proportion. The much-anticipated Office of the Director of National Intelligence report on Russian influence in the 2016 presidential election from January was roughly 40 percent a 2012 document on the Russian propaganda network Russia Today–a focus that left even the harshest Kremlin critics perplexed.

The fear of Russian propaganda has also consistently been lumped in with the corollary fear over the rise of “fake news.” Indeed, when lobbying for the creation of the Global Engagement Center in her first speech post-election, Hillary Clinton decried “fake news” for putting lives “at risk” and praised bipartisan commitment to combat its spread. New sanctions on Russia, proposed in January by Senators John McCain and Ben Cardin, would add an additional $100 million to the GEC’s coffers to, among other things, counter “fake news” supposedly emanating from Moscow.

What exactly is and isn’t “fake news” worthy of countering? Who will be doing the “countering” and whom will this “countering” target? These question remain unanswered as tens of millions dollars pour in to stopping the Russian disinformation menace. Without the State Department’s clarifying its position on targeting Americans or paying American journalists, the risk of government “counter”-propaganda’s quickly becoming good old-fashioned regular propaganda is as obvious as it is pernicious.

“Until we have more clarity about disseminating directly to Americans and the government’s obligation to attribute,” Sager insists, “It’s going to be very difficult to know when exactly the government is talking to us.”