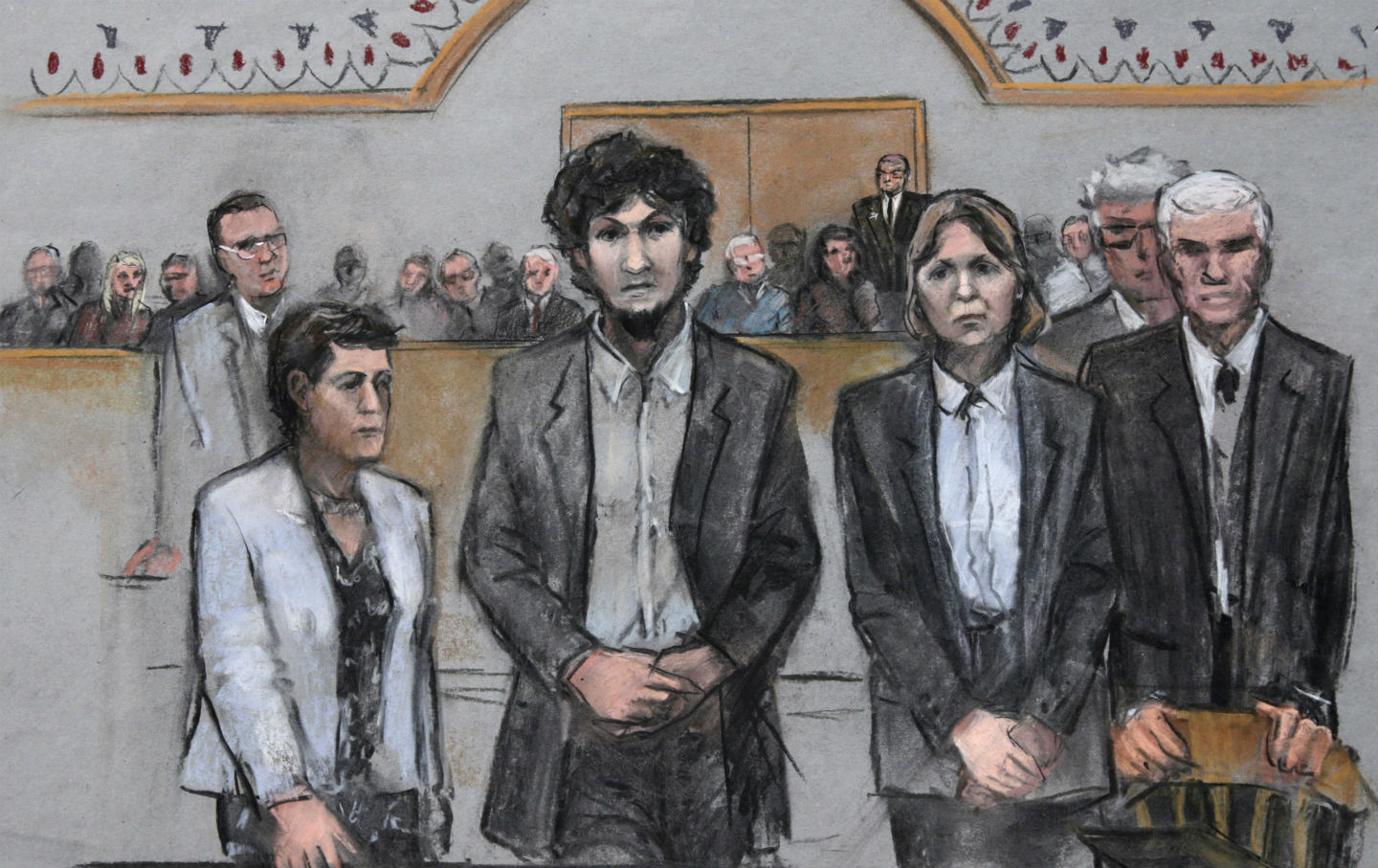 There was little surprise in a federal jury voting death for Boston Marathon bomber Dzhokhar Tsarnaev, and little ground for sympathy in the record of the defendant himself, beyond his sheer youth. While the evidence presented at trial seemed to confirm the picture of his enraged older brother Tamerlan as the radicalized instigator of their brutal plot, Dzhokhar’s protracted role ahead of time and his stone-cold activities in the hours following the bombing (for example, calmly cruising the dairy aisle at Whole Foods) are not the material from which a strong mitigation case is made.

But while perhaps inevitable, Tsarnaev’s federal death sentence is still profoundly unsettling. He was sentenced to death in a state that abolished capital punishment 31 years ago; in a city whose residents had overwhelmingly preferred that he be imprisoned for life; and in a courtroom in which sat survivors and victims’ family members who were themselves deeply divided over his fate. What does it mean when a killer is sentenced to die by lethal injection against the wishes of the very community he injured? What is the purpose of a federal prosecution imposing capital punishment on a region that wants none of it, at a moment when the death penalty has been abandoned by more than one-third of all states?

State death-penalty law, for better or worse, is usually a deep reflection of local history, culture, and debate. That’s true in the states that still routinely execute prisoners, like Texas and Oklahoma, as well as in the nine states that have abolished capital punishment since 1980, like Massachusetts.

Today’s federal death penalty—a calculated political invention of then-president Bill Clinton—is a different story. Until 20 years ago, capital punishment on the federal level was limited to treason and a handful of other offenses not covered by state law. But in 1994, the Clinton administration—responding to the first World Trade Center bombing and hoping to burnish its tough-on-crime credentials—radically expanded capital punishment, writing 60 new death-penalty offenses, including several related to terrorism, into a sweeping criminal-justice “reform” package.

It didn’t do much good; seven months after the Clinton crime bill was signed, Timothy McVeigh and two co-conspirators bombed the Murrah Federal Building in Oklahoma City. So the next year, Clinton and Congress went even further, passing the Antiterrorism and Effective Death Penalty Act. This package—one of the most deceptively labeled bills of all time—limited habeas corpus and weakened the protections offered to state and federal death-row prisoners, most of whom had nothing to do with terrorism.

Far from reflecting a social consensus, these changes were designed to inoculate Clinton and his allies in the country’s most ardently pro-execution regions and to resell capital punishment to states that had rejected it. US Attorneys could push capital trials into non-death-penalty jurisdictions, occasionally leading to notable conflicts. In 2011, for instance, federal prosecutors in Rhode Island—a state without capital punishment since the 1980s—insisted on pursuing the death penalty against a gas-station robber who would otherwise have been sentenced in the state’s criminal courts. Then-governor Lincoln Chafee was so incensed at this imposition that he committed a singular act of civil disobedience: For almost two years, he refused to hand the offender over to the feds. The dispute was settled only when the robber pleaded guilty in return for life without parole.

As a deterrent to terrorism, the federal death penalty has been meaningless. It did nothing to prevent the Oklahoma City bombing, the 9/11 attacks, or ideologically motivated lone wolves like Nidal Malik Hasan, the Fort Hood shooter, or the Tsarnaevs. Meanwhile, Khalid Shaikh Mohammed and the other 9/11 conspirators will not be tried under the Antiterrorism and Effective Death Penalty Act, since the same politicians who clamor for the death penalty as a deterrent to terrorists are unwilling to entrust Guantánamo prisoners to US courts.

Whether the federal government will even have a mechanism for executing Tsarnaev is now a matter of debate. The last terrorist bomber to be executed was McVeigh, killed by lethal injection in Indiana in June 2001. At his execution, news reporters noted tears streaming from one otherwise-immobile eye. Those tears caught the attention of Columbia University anesthesiologist Dr. Mark Heath, who recognized them not as a sign of emotion, but as an indication that the pain-masking sedative in the government’s three-drug cocktail was wearing off. McVeigh was still paralyzed, but now in unspeakable agony.

From those tears flowed 14 years of medical-journal and law-review articles, lawsuits, and worldwide alarm about lethal injections. International pressure led drug companies to refuse to supply the cocktail’s ingredients to state corrections departments. During the Tsarnaev trial, the lethal-injection debate reached the Supreme Court, with the justices heatedly arguing over whether the use of substitute chemicals, acquired from shadowy suppliers, amounts to cruel and unusual punishment.

However the Court rules on lethal injection, there’s no denying that the politics of crime and punishment have undergone a sea change. In a new libertarian wave, Congress, the president, and state legislatures are variously ratcheting down the “war on drugs,” reversing three-strikes laws, and trying to shutter overcrowded and expensive prisons. In 1994, Clinton Democrats played the federal death-penalty card to retain their hold in divided states. But since then, the country has continued a slow, steady march in the opposite direction. Six states, including four that today have Republican governors—New Jersey, New Mexico, Maryland, and Illinois—have renounced the death penalty. Meanwhile, three of Hillary Clinton’s rivals—Chafee, former Maryland governor Martin O’Malley, and Vermont Senator Bernie Sanders—oppose capital punishment. Chafee and O’Malley, who abolished the death penalty as governor, both issued statements of respect for the Boston jury’s verdict, but made clear their determination to stay the abolitionist course. Sooner or later, the federal death penalty will become a Democratic campaign issue, and Clinton will be challenged on her views. It is entirely conceivable that a few years from now, support for America’s capital-punishment laws could melt away as quickly as opposition to marriage equality.

Boston Mayor Marty Walsh and Massachusetts Governor Charlie Baker both expressed hope that the verdict would bring, in Baker’s words, “some kind of closure.” But there’s no evidence that capital punishment provides any such thing. For Boston, Tsarnaev’s death sentence can only prolong the agony, keeping his case front and center for years to come. As Bill and Denise Richard, whose son was killed and daughter maimed in the bombing, put it: “As long as the defendant is in the spotlight, we have no choice but to live a story told on his terms, not ours.