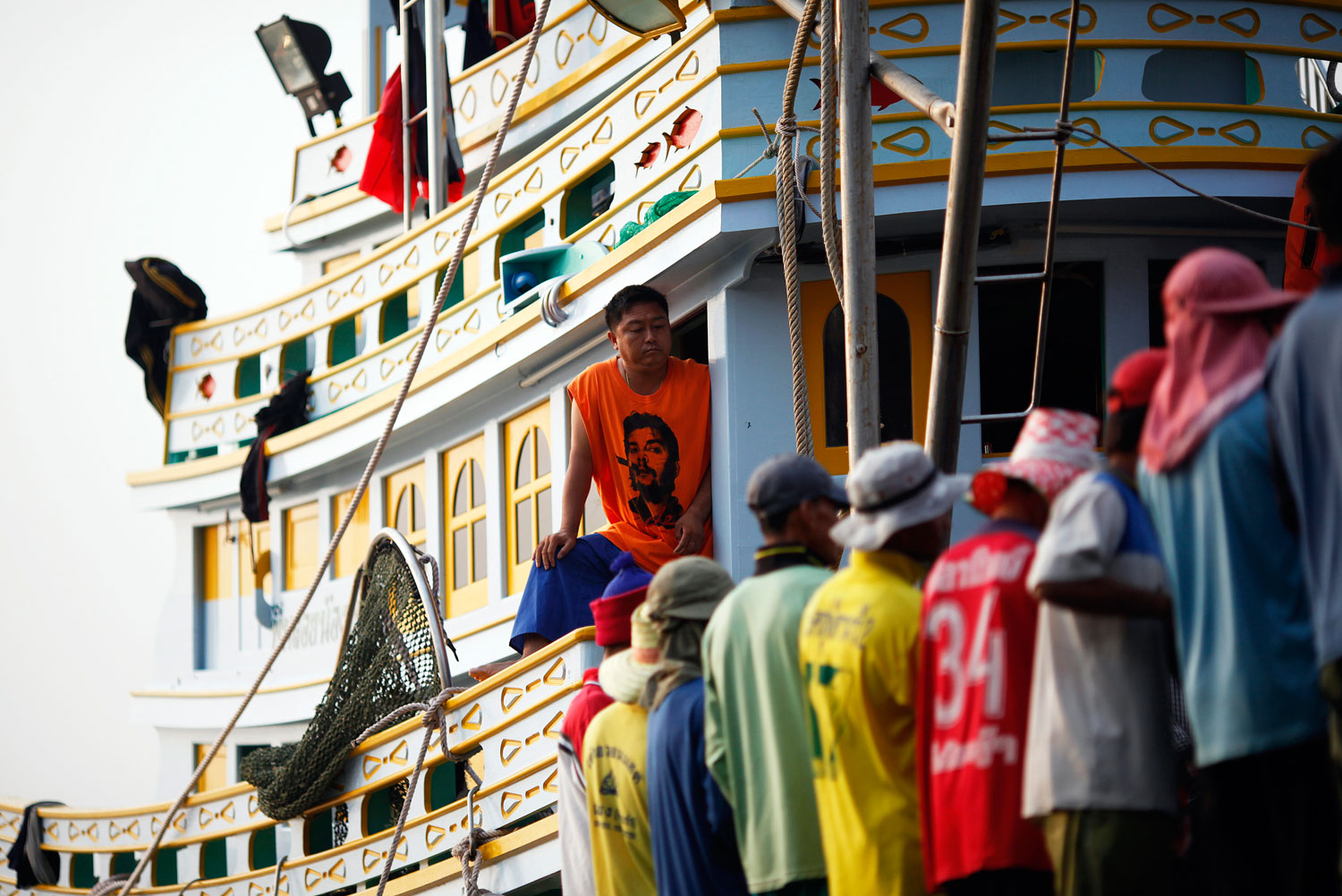 A Thai employer monitors migrant workers from Myanmar working on his fishing boat at a port in the town of Mahachai near Bangkok. (Reuters/Damir Sagolj)

The ocean’s culinary delights look pristine on our tables: peeled, processed and sterile. Now Western consumers are getting a taste of the human drudgery in the dregs of the supply chain.

News reports have surfaced of enslavement in the fisheries of Thailand. Men have reportedly been forced to work at boats for as many as twenty hours a day; disciplined with beatings, sometimes murders; often physically held captive on boats and at ports; and further preyed upon by usurious debts. The industry employs an estimated 650,000, with roughly 270,000 migrants on Thai fishing boats. Many have been trafficked from two poorer, less stable neighbors, Myanmar and Cambodia. Despite widespread reports of abuse and forced labor, regulatory bodies are weak and riddled with corruption, and we may never know how many have been subjected to this ferocious exploitation in order to keep our freezers stocked.

In a study by the UK-based Environmental Justice Foundation (EJF), which documented extraordinary brutality on the fishing vessels, a trafficking survivor described the mechanics of modern-day captivity at sea:

“We had no choice. There was nowhere to flee; we were surrounded by the sea. After we arrived back to the shore, we were locked inside the room guarded by their men; there were too many of them. So the workers had to take one trip after another, without having a choice.”

The processing of human beings begins on shore with debt bondage, as EJF explains, “Many migrant fishers are sold to boat owners for what is known as ka hua, the price paid which the worker must pay off before receiving any wages. This can leave many fishers working for months or even years without pay.”

Their status as a commodity in a complex global trade leaves them variously disenfranchised: they’re simultaneously trapped in primitive conditions, yet their labor is governed by a fast-moving, technology-driven market run by “first world” monopolies.

Thailand’s $7.3 billion fishing-export industry is major international market, yielding hundreds of thousands of tonnes of seafood each year. But it’s also rife with illegal and environmentally destructive fishing practices, which have severely depleted fish stocks and undermined the oceanic ecosystem as well as the fishing economy. The whole regional industry embodies the kind of neoliberal profiteering embedded in the global seafood industry (one study estimates that 20 to 32 percent of wild-caught seafood imports to the United States is illegally traded). Migrant workers from Myanmar work on a fishing boat before sailing out of the port of Mahachai. (Reuters/Damir Sagolj)

A large portion of Thailand’s catch is considered “trash fish” which also enters the supply chain after being processed into fishmeal and then indirectly fed to other fish stocks. The Guardian recently traced this fishmeal to the prawns sold in “leading supermarkets around the world, including the top four global retailers: Walmart, Carrefour, Costco and Tesco.” The main purveyor of fishmeal from slave-staffed boats, Thailand-based Charoen Pokphand (CP) Foods, has also directly sourced ready-to-eat prawn to UK outlets.

Meanwhile, investigators with the US State Department and various watchdog groups have criticized the Thai government’s deeply inadequate enforcement; prosecutions for labor trafficking on fish boats are extremely rare, with just a handful of formal investigations in 2010 and 2011. Even the workers who are “rescued” must endure a gauntlet of legal bureaucracy and in many cases, indefinite detention, which can drag on for weeks or months and often fails to protect the impoverished and isolated workers from their former captors.

At the same time, Thai officials continue to crack down on the migrants, rather than their captors, targeting undocumented Burmese and Cambodians and spurring an exodus back across the porous border.

So far, these political responses sidestep, or potentially impede, the prospect of workers themselves—that is, those most impacted by these mass human rights violations—to change the industry. Deeming them “slaves” helps convey the gravity of the exploitation, but it also has the effect of dehumanizing or compartmentalizing the issue, rather than locating the structural inequalities and gradients of exploitation throughout the industry.

However, there are worker-led structures in place that can wage a meaningful challenge against both the criminal trafficking underground and the legal plunder of the ocean economy. In fact, there is a long tradition of radical maritime unionism. In the early twentieth century, dock and ship workers were at the helm of militant internationalist labor campaigns, organizing at key trade chokepoints across global ports. But in Thailand today, less than 5 percent of the workforce is unionized, and many, particularly undocumented migrants, lack real collective bargaining rights. In the fisheries, EJF Executive Director Steve Trent tells The Nation via e-mail, “the prospect of meaningful workplace representation is even more remote…. Workers on piers and fishing boats complain that grievances have to be channeled through gangmasters—the same individuals often responsible for their abuse and exploitation in the first place—who are typically bi-lingual and free to mediate between the management and workers according to their own interests.”

Though lax regulation and huge consumer demand help Western retailers to prosper while suppressing labor costs, conversely, empowering workers would not only help remedy the gravest abuses but also ensure the industry’s sustainability in the long term. Migrant workers from Myanmar clean a fishing net as they sail out of the port of Mahacha. (Reuters/Damir Sagolj)

Liz Blackshaw, leader of the ITF-IUF (International Transport Workers’ Federation–International Union of Food Workers) Catcher to Counter program), says that so far efforts to regulate the fishing industry haven’t linked sustainability measures with corporate accountability. “If you look at the policy framework in this industry, the majority of it is in place to safeguard the catch not the catchers,” she explains via e-mail. Effective international labor accords or trade regulations would trace the product and the labor to corporate actors.

In ITF-IUF campaigns in the Asia Pacific region, Blackshaw says, “the challenge is to find a way to organize that incorporates different facets” of a fractured contract-based production system. For example, one approach might be to start with organizing cannery workers, using their demands to anchor a baseline for working conditions, and then “work backwards along the supply chain to the fishing fleet.” A pilot project based on this model has made some inroads in Papua New Guinea’s embattled maritime sector, where the union says that incremental organizing around wages and infrastructure have helped advance labor reforms, including measures to raise the minimum wage.

In addition to strengthening international monitoring of the industry, workers can organize at the grassroots on multiple fronts—consolidating consumer support for human rights, environmentalists’ focus on sustainability, and cross-sector labor organizing.

In Blackshaw’s view, “we are now at a point where we could start calling for consumer boycotts, revocation of fishing licenses for breaches of fundamental rights; demanding safety inspections for trade purposes, etc. We cannot organize this industry vessel by vessel; plant by plant, we have a sophisticated and systematic model for organizing which is already introducing a labour narrative into what has historically been a sustainability-only debate.”

Until the seafood business starts valuing workers lives as much as it does the size of the catch, the precarious labor system on Thailand’s waters is destined to sink under its own weight.