Volkswagen workers somberly shuffled through the turnstiles and into the front entrance of the 1,400-acre factory here on Monday morning, having just endured a scorched-earth union election which the United Automobile Workers (UAW) narrowly lost, 776 to 833.

This was the union’s second attempt. In 2014, with the company proclaiming its neutrality, the UAW lost by 86 votes. This time, besieged by right-wing politicians, business-backed astroturf groups, and with VW more openly hostile, the union’s majority of support was again hacked away.

State and local politicians made headlines announcing that voting for the union would jeopardize incentives—expected to add another 1,000 jobs—tied to an upcoming plant expansion and the production of a new electric vehicle. County Mayor Jim Coppinger echoed their threats, stating that “the question facing the workers voting this week is simple: do we really want to risk it all?”

The Presidential Candidates Should Debate Union Rights in Chattanooga

Locals watching the NBA championship in downtown bars had to endure competing pro- and anti-union ads every commercial break. Electric billboards lining I-75 and Highway 153, the main arteries approaching the plant, alternated messages from the union and corporate front groups like the Center for Union Facts, that were fighting it. Nearby gas stations ran pro-union videos on pumps. Popular radio stations had anti-union commercials on heavy rotation.

The pressure was compounded for workers once they set foot in the plant, where they were forced to listen to supervisors delivering anti-union talking points at the beginning of their shifts. Management handed out flyers insinuating that a vote for the union was a vote to close the plant. That theme was reinforced by newly reinstalled Volkswagen CEO Frank Fischer, who linked the 1988 closure of the company’s former plant in Westmoreland, Pennsylvania, to labor conflict, suggesting the same could happen in Chattanooga. 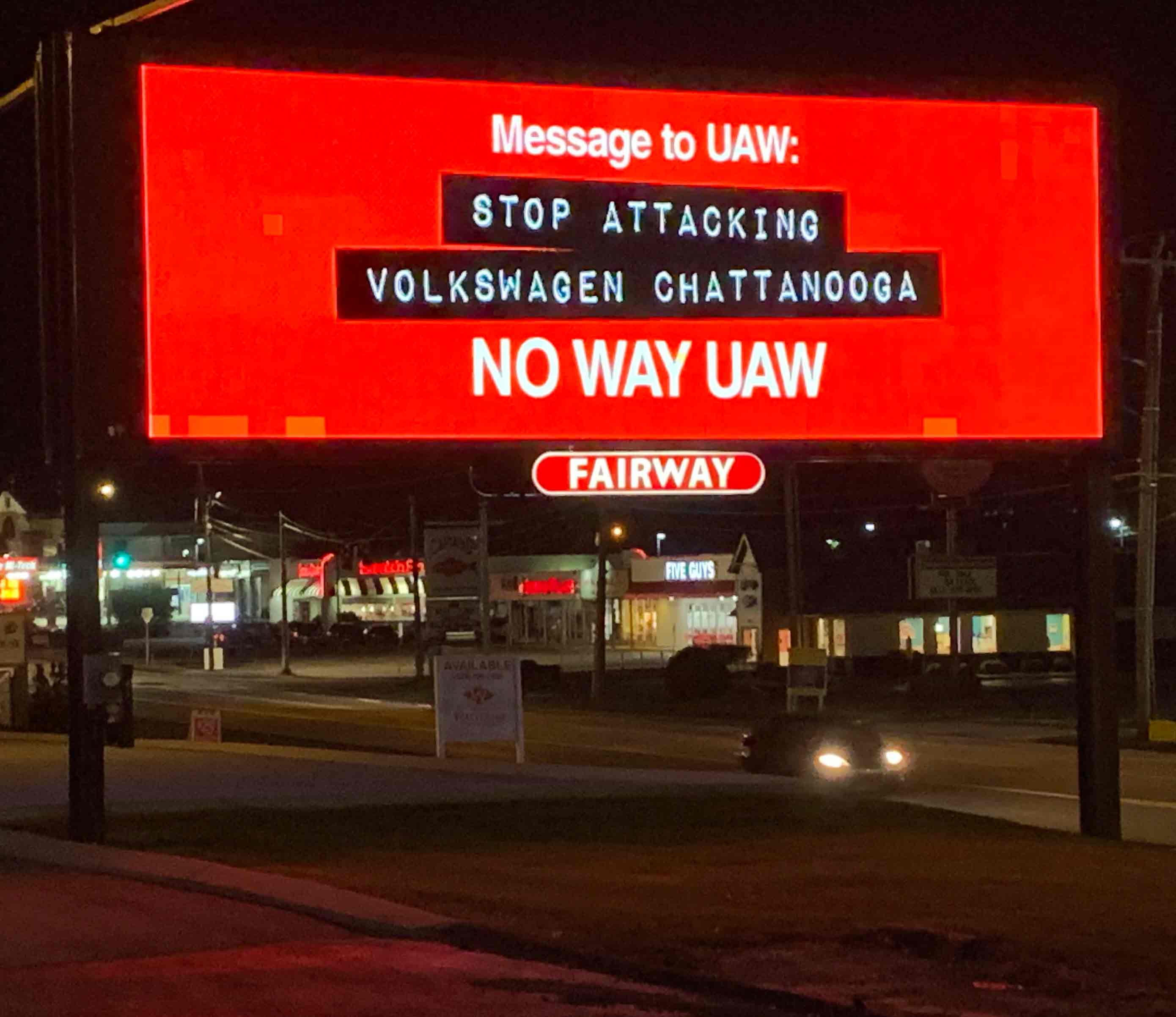 Intensive anti-union campaigns involving employers, politicians, and corporate front groups is the new status quo in the South. Sadly, the UAW has consistently failed to build strong, high-participation campaigns capable of withstanding and even pushing back against these attacks through militant action. The UAW’s approach has left workers woefully ill-prepared to deal with a company assisted by powerful state politicians and dark-money groups.

While there is a lot of blame to go around, not all of it is being directed at the company and its union-busting proxies—or the union. Some is aimed at the UAW’s German allies. “Germany waited until the last fucking minute to help,” said one enraged union activist, who asked to remain anonymous.

For years, the UAW has unsuccessfully tried to leverage the power of European unions and German laws mandating labor-management partnership. Elizabeth Warren has recently proposed an “Accountable Capitalism Act,” explicitly based on Germany’s model of social partnership, mandating that workers elect a minimum of 40 percent of their employer’s board of directors.

Warren’s heart is in the right place, but the UAW’s experience with Volkswagen suggests the policy may be misguided. During the union’s first campaign in 2014, UAW officials worked hand in glove with top employee representatives of the Global Works Council and IG Metall, Germany’s largest union, to turn the union election into a referendum on forming the first German-style works council in the United States. 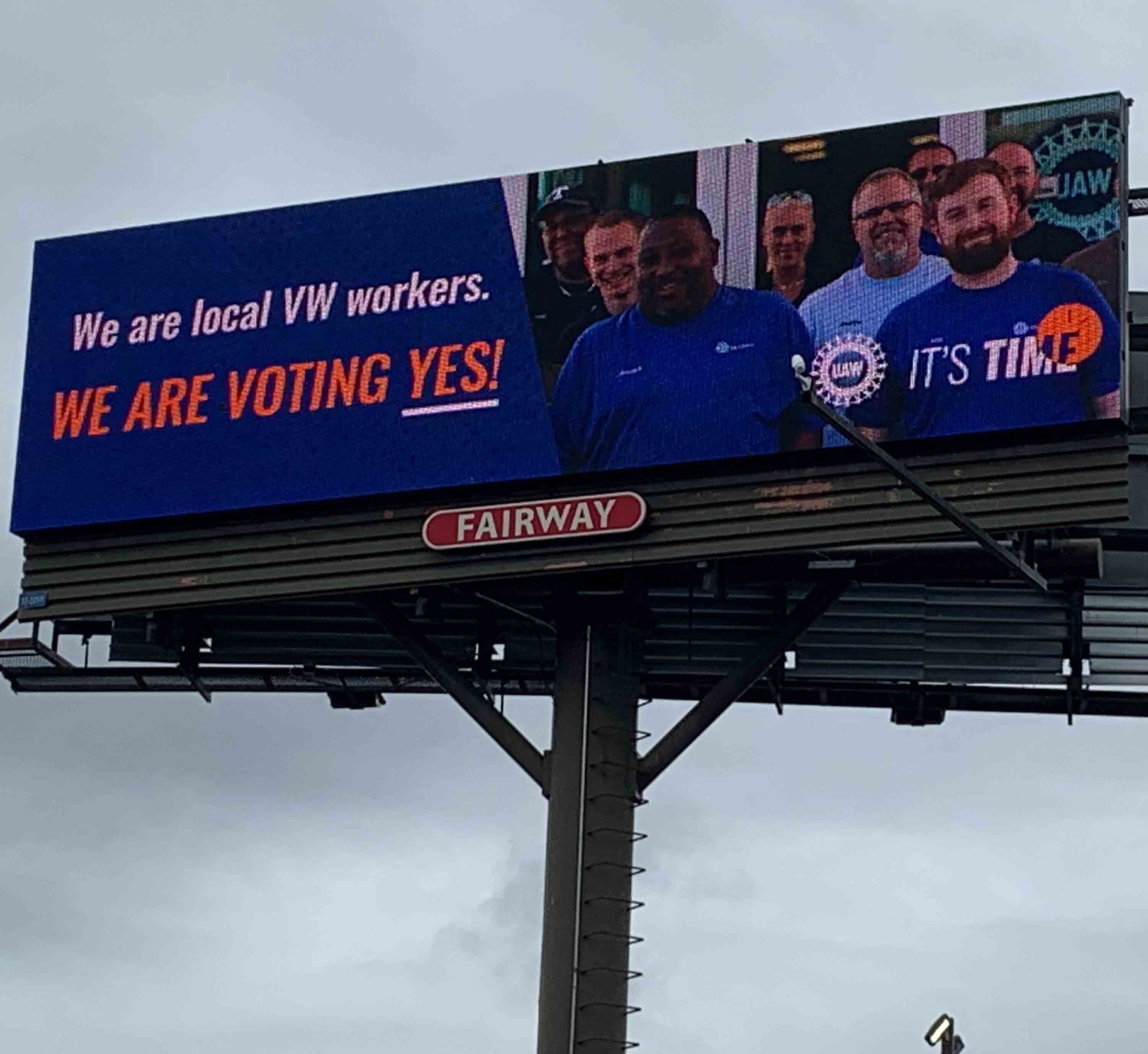 Works councils are staffed by elected employee representatives and act as a non-confrontational forum for workplace issues between management on the one hand and both white- and blue-collar employees on the other. Additionally, under Germany’s Codetermination Act, half of Volkswagen’s governing Supervisory Board are employee representatives. Most are elected from works councils.

But under US law, works councils can only be established through a collective-bargaining agreement with a union; otherwise, they would be an illegal “company-dominated labor organization.” Through pressure from the Global Works Council and IG Metall, the UAW secured an election agreement with the company in the lead up to the 2014 election here. Volkswagen pledged neutrality and even demonstrated support for the UAW as a pathway for establishing a works council at the plant.

At the time, the UAW touted the works council as a new model for labor-management partnership. A union handout from 2014 proclaimed “The role of the union in the 21st century is to create an environment where both the company and the workers succeed.”

“The works council was a Trojan horse to get the UAW in,” said another pro-union worker who has asked to remain anonymous. “They were trying to have a soft-serve variation of a union, something they thought would be easier for Southern workers to swallow. And the union had management to help sell it.”

The 2014 loss stunned the UAW leadership. Who knew that workers don’t join unions to better partner with management?

And then everything changed in 2015 following the revelation that Volkswagen had installed software on 11 million “clean diesel” vehicles that allowed them to cheat emissions tests while pumping out toxins at up to 40 times the legal limit. The resulting scandal and global fallout cost the company billions.

Suddenly, VW management was hell-bent on maintaining its non-union factory in Tennessee, where workers receive the lowest pay and benefits from any US automaker.

When 160 maintenance workers did vote to join the UAW in 2015, the company hired the notorious union-busting law firm Littler Mendelson and refused to bargain—despite pressure from IG Metall and the Global Works Council. After four years of fruitless efforts to force the company to bargain, the UAW abandoned the maintenance unit and filed for another plant-wide election. According to members of the organizing committee, the union filed with over 65 percent of workers signed up. That pro-union margin was then slashed after weeks of intense pressure from Volkswagen management.

Less than a week before voting was to begin, top Global Works Council leaders sent a letter to the UAW stating they had spoken with management and had come to a “clear expectation” that attempts to “influence the election will not take place again.”

A few days later, Fischer held another series of mandatory plant-wide meetings in which he slammed the UAW and emphasized the company’s preference that employees choose “direct communication” over unionization. It was an embarrassing demonstration of just how little control German labor has over American management, even in a company where they control half the board—more than Warren’s proposed 40 percent. “Corporations are only ‘social partners’ as long as they can thereby increase the profit. If political conditions permit, then they will always wage class struggle against the workers and against the unions,” said Stephan Krull, a retired IG Metall activist and former works council representative at Volkswagen’s flagship plant in Wolfsburg.

The UAW’s hopes of organizing workers by leveraging the alleged power of German employee representatives in the corporate hierarchy has been worse than a dud. It has backfired.

Rather than importing European-inspired social partnership between labor and capital to the United States, Volkswagen management is signaling to European unions that it is embracing American-style union-busting.

Luckily, there are examples of organizing that gets it right. The recent Stop and Shop strike and Vox Media walkout both demonstrated that workers’ power derives from the same source it always has: their ability to collectively withdraw their labor.

This is no less true in Republican-dominated states. The West Virginia teachers’ strike continues to be an inspiring illustration of how workers can use their power to challenge the corporate agenda–even when their own union leadership isn’t always on board.

If Volkswagen workers hope to overcome the fear, uncertainty, and division in their ranks, then they need to stop looking to Europe for salvation and start looking to one another and their own collective power.