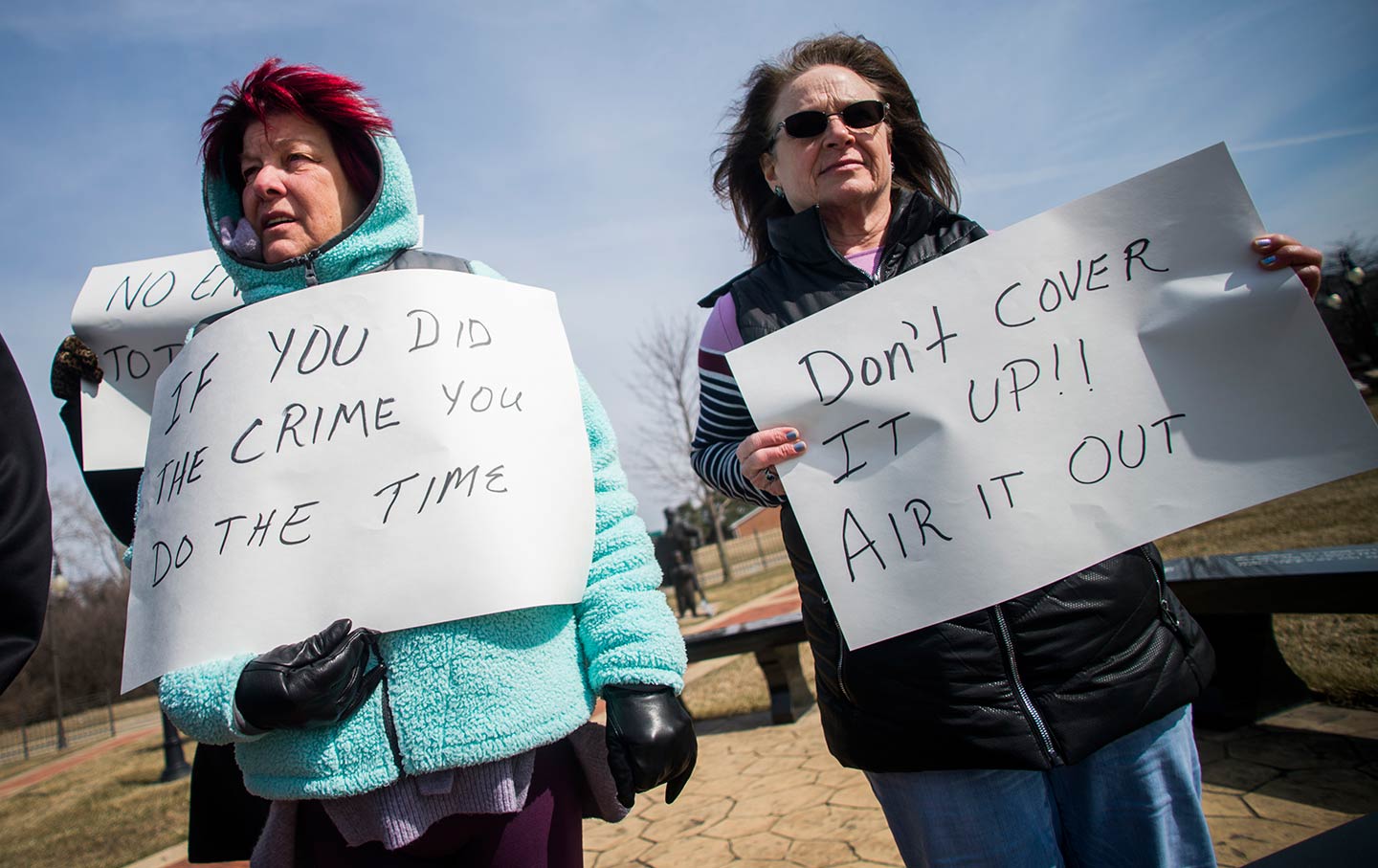 The United Auto Workers was born out of a crusade. In 1936, militant workers defied the courts and braved gunfire and tear gas to occupy the General Motors Fisher Body Plant One in Flint, Michigan.

After a grueling 44 days, the sit-down strikers were victorious and the UAW signed its first contract with GM, then the largest automaker in the world.

Over the next several decades, the UAW became the pacesetter for private-sector unions in the United States. Whatever autoworkers won trickled down to workers in steel, copper, aluminum, glass, rubber, freight transportation, and aerospace. It is not hyperbole to say that the UAW, more than any other private-sector union, shaped the 20th-century economy through its collective-bargaining agreements.

Now, in one of the greatest tragedies of the US labor movement, that crusade has degenerated into a corrupt, cigar-chomping farce. A multiyear federal investigation into corruption in the auto industry has revealed how Fiat-Chrysler executives pumped millions of dollars into a training center that was jointly administered with the union and encouraged UAW officials to use that purse, along with union dues, as a slush fund to finance their obscenely lavish lifestyles.

“If you see something you want, feel free to buy it,” Fiat-Chrysler Vice President Alphons Iacobelli told senior union officials. So they did.

Government documents related to the charges and subsequent plea deals provide incredible details. One UAW vice president used hundreds of thousands of dollars to pay off his mortgage. Another spent tens of thousands of dollars on a Miami Vice–themed party, complete with high-end liquor and scantily clad women who strolled around lighting men’s cigars. Still another group of top officers rented private villas in Palm Springs for months, spending weeks on end playing golf by day and partying by night. Fiat-Chrysler even paid for a company to haul all their golf bags, luggage, and newly purchased goodies back and forth between California and Detroit in a semitruck.

What did the companies get in return?

According to the Department of Justice, union officials received these payouts “in exchange for manipulating the collective bargaining agreement process at the expense of UAW members.” Activists point to the rise in temporary workers and outsourced jobs in the plants as well as the loss of retiree health care and defined pensions as evidence of concessions the union has given up over the past decade in contracts that favor the employers.

Justin Mayhugh, an autoworker at the GM Fairfax Assembly plant in Kansas City, believes the recent six-week strike against GM was more about letting workers blow off steam than actually disrupting the company. The union let the company run up a surplus in its inventory prior to the strike, and didn’t build any community-based coalitions to get the public more involved. It didn’t even have clear demands about what it was fighting for.

“The International sent GM workers out on a strike in an attempt to reestablish some of their credibility,” Mayhugh told me. “The contract we ended up agreeing to would never have passed if we hadn’t been starved out for six weeks.”

The UAW is still in negotiations with Chrysler, but the GM contract passed with a narrow 57 percent majority voting in favor of ratification, while the Ford vote passed by just 56 percent. Many autoworkers reported that they voted yes on the contract only because they had no faith that the union’s leadership would have been able to negotiate a better deal had they voted no.

Having union leaders in their pocket to push concessionary contracts onto workers is so valuable to Fiat-Chrysler that according to the Justice Department, when the union hit a financial crisis in 2014, the company illegally paid the salaries of a number of union officials over the next two years. The company also allowed union staff to charge routine union expenses to the training center credit cards, which Fiat-Chrysler then paid off.

From Our Strikes Correspondent

The Path to Climate Justice Runs Through the UAW Strike

Three Fiat-Chrysler executives and eight UAW officials have been convicted—and more indictments are on the way. Over the last week, UAW President Gary Jones and International Executive Board member Vance Pearson both resigned from the union after six locals voted to bring charges against them that could have led to their expulsion. Pearson was recently arrested and charged with embezzling union dues. The Detroit News has identified Jones and former UAW president Dennis Williams as co-conspirators in the government’s prosecution of Edward “Nick” Robinson, a regional union official who has also been charged with embezzling union dues. Given the gravity of the charges and the government’s claims, it is likely that both Jones and Williams will be arrested in the near future.

All the union officials involved in the corruption scandal are members of the Administration Caucus, a political machine founded by famed UAW president Walter Reuther that has ruled over the union for decades by dispensing appointed patronage positions to loyalists and threats to dissidents. In Reuther’s time, the Caucus targeted leftists, purging suspected communists and socialists from labor’s ranks. In subsequent decades, that machinery would be turned against anyone, regardless of their political ideology, who dared to challenge the union leadership.

“If you can toe the line, take orders, and do the things you are told to do when you are told to do them, then that is all you need to rise” in the Caucus, Gary Duncan, a retired auto worker and former president of UAW of Local 551 at Ford’s Chicago Stamping plant in Illinois, told The Nation.

Why the UAW Lost Another Election in Tennessee

Many of these corrupt officials were desperate to get away from the grind of the assembly line as fast as they can—and then stay away at any cost. Virdell King, one of the first union staffers convicted of accepting bribes from Chrysler, literally defended her actions in court by claiming that she was beholden to union officers and feared being demoted or being sent back to the plant if she didn’t participate in the illegal scheme to embezzle funds.

“It’s easy to consolidate power when you can appoint yes-men all over the place,” Kenneth Larew told me. Larew has worked as a production worker at GM for 20 years.

And when that doesn’t work, the union has other ways to make locals bend to their will. “There is a lot of fear that the International Union controls product allocation and that if you oppose the directives of the Administrative caucus then they could withhold products to your union,” Larew told The Nation. “Withholding products” is one of the many terms used by automakers, and union officials, for the process by which the company closes a plant—by winding down the models of automobiles that are made there.

As voting on the Ford agreement was coming to a close earlier this month, Michael Robison, an assistant director in the union’s Ford Department, wrote in an autoworker Facebook group dominated by dissidents that local unions that voted down the contract should have the product taken away from their plants and given to locals that voted yes. Robison was demoted after the post went viral.

Veteran activists can share similar stories going back almost as far as the early 1980s when the Administration Caucus began pursuing a dual strategy of concessions and partnership with employers. UAW officialdom argued that the best way to protect union jobs was not by waging militant strikes like the Flint sit-down but by helping to improve productivity on the shop floor and profits in the board room.

With the aid of automation and sped up lines, productivity in auto plants has skyrocketed. But that didn’t protect union jobs.

Declining union density in the auto industry is also due to the influx of nonunion, foreign-owned automakers, primarily in “right to work” states in the South. Foreign automakers now produce more vehicles in the United States than the Big Three domestic auto companies combined.

To date, the UAW has not been able to organize a single one of these Southern transplants, which have obtained a competitive advantage over their unionized counterparts by employing armies of temporary workers, paying lower wages, and providing fewer benefits.

The end result of all this corruption, collusion, and competition has been steeply declining standards for workers at the heart of America’s manufacturing base, with resulting fallout for all private-sector workers across the economy.

But a few sparks still remain from the flame that was lit in Flint all those decades ago. The nearly six-week-long strike against GM that ended in late October demonstrates just how militant—and pissed—autoworkers still are. And some of them are starting to turn their organizing focus onto the union itself, in the hope of cleaning it up.

In the wake of the GM strike, a number of autoworker activists from around the country have come together to form Unite All Workers for Democracy. The group is establishing itself as a formal challenge to the Administration Caucus. Their first goal is to successfully force a special convention to amend the UAW’s constitution to require the direct election of top union officers, rather than the current system of highly controlled union delegates.

“We are bringing resolutions to our local membership calling for a special convention,” Chris Budnick, a quality inspector at the Ford Louisville Truck Plant, told The Nation. “If 15 locals representing no less than 20 percent of the UAW’s total membership vote in support of the resolution, then it goes to a nationwide referendum vote of all the membership. If that is successful, then we elect new delegates for the special convention.”

Local 774 in New York was the first to pass the resolution. One of the activists supporting the call for direct elections is Roberta Gainer, a local 774 member who has worked at GM’s Tonawanda Engine Plant near Buffalo for 40 years

“We need to have a special convention given the magnitude of the corruption,” Gainer told me. “It can’t be left up to the executive board, it’s going to require the membership getting directly involved in making decisions if we hope to truly transform the union. It’s the only we can move on and begin to rebuild.”