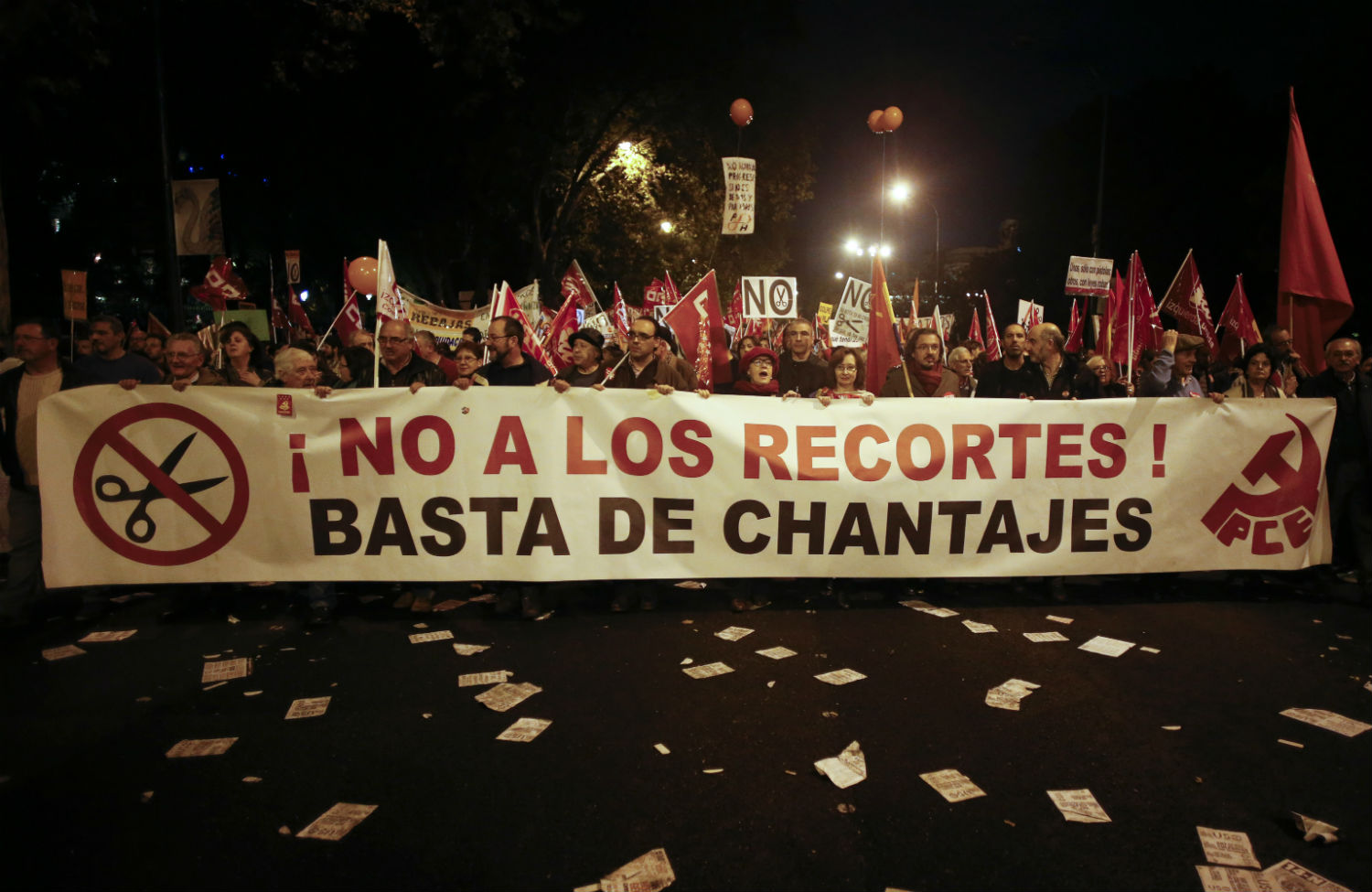 Demonstrators in Madrid in 2012 hold a banner that reads, “No to cuts. Enough blackmails!” (Susana Vera/Reuters)

Myths are dangerous because they rely more on cultural memory and prejudice than facts.

And behind the current crisis between Greece and the European Union (EU) lies a fable that bears little relationship to why Athens and a number of other countries in the twenty-eight-member organization find themselves in deep distress.

The tale is a variation of Aesop’s allegory of the industrious ant and the lazy, fun-loving grasshopper. The “northern countries”—especially Germany, the Netherlands, Britain and Finland—play the role of the ant, and Greece, Spain, Portugal and Ireland the part of the grasshopper.

The ants are sober and virtuous, while the grasshoppers are spendthrift, corrupt lay-abouts who have spent themselves into trouble and now must pay the piper.

The problem is that this myth bears almost no relationship to the actual roots of the crisis or what the solutions might be. And it perpetuates a fable that the debt is the fault of individual countries rather than a serious crisis at the very heart of the EU.

The European debt crisis goes back to the end of the roaring ’90s, when the banks were flush with money and looking for ways to raise their bottom lines. One major strategy was to pour money into real estate, which had the effect of creating bubbles, particularly in Spain and Ireland.

From 1999 to 2007, bank loans for Irish real estate jumped 1,730 percent, from 5 million euros to 96.2 million—more than half the country’s GDP. Housing prices increased 500 percent. “It was not the public sector but the private sector that went haywire in Ireland,” concludes Financial Times analyst Martin Wolf.

Spain, which had a budget surplus and a low debt ratio, went through much the same process, and saw an identical jump in housing prices: 500 percent.

In both countries there was corruption, but it wasn’t the penny ante variety of tax evasion or profit skimming. Instead, politicians—eager for a piece of the action and generous “donations”—waived zoning rules, sidestepped environmental regulations and cut sweetheart tax deals. Hundreds of thousands of housing projects went up, many of them never to be occupied.

Then the American banking crisis hit in 2008, and the bottom fell out. Suddenly, the ants were in trouble.

But not really, because the ants have a trick: they gamble and the grasshoppers pay. As Nobel Prize–winning economist Joseph Stiglitz points out, Europe (like the United States) moved its gambling debts “from the private sector to the public sector—a well-established pattern over the past half-century.”

Fintan O’Toole, author of Ship of Fools: How Stupidity and Corruption Sank the Celtic Tiger, estimates that to save the Anglo Irish Bank, Irish taxpayers shelled out 30 billion euros, a sum that was the equivalent of the island’s entire tax revenues for 2009. To raise the money, the European Central Bank—which, along with the International Monetary Fund and the European Commission, makes up the Troika—strong-armed Ireland into adopting austerity measures that tanked the country’s economy, doubled the unemployment rate, increased consumer taxes and forced many of the country’s young people to emigrate. Almost half of Ireland’s income tax now goes just to service the interest on its debts.

And poor Portugal. It had a solid economy and a low debt ratio, but currency speculators drove up interest rates on borrowing beyond what the government could afford, and the European Central Bank refused to intervene. The result was that Lisbon was forced to swallow a “bailout” laden with austerity measures that in turn torpedoed its economy.

In Greece’s case, too, while the country has no shortage of wealthy tax evaders, the myth of profligacy falls flat. Germany, Sweden and many other European countries spend more of their GDP on services than does Athens. Greece spends 44.6 percent of its GDP on its citizens, which comes in just below Germany’s 46 percent and well beneath Sweden’s 55 percent.

And as for lazy: Greeks work 600 hours more a year than Germans.

According to economist Mark Blyth, author of Austerity: The History of a Dangerous Idea, Greek public spending throughout the 2000s was “really on track and quite average in comparison to everyone else’s.” Its so-called flood of “public sector jobs” consisted of “14,000 over two years.” All the talk of the profligate Greek government is “a lot of nonsense” and just “political cover for the fact that what we’ve done is bail out some of the richest people in European society and put the cost on some of the poorest.”

There was a “score” in Greece. However, it had nothing to do with free spending. Rather, it was a scheme dreamed up by Greek politicians, bankers and the American finance corporation Goldman Sachs.

Greece’s application for EU membership in 1999 was rejected because its budget deficit in relation to its GDP was over 3 percent, the cutoff line for joining. That’s where Goldman Sachs came in. For a fee rumored to be $200 million (some say three times that), the multinational giant essentially cooked the books to make Greece look like it cleared the bar. Then Greece’s political and economic establishment hid the scheme until the 2008 crash shattered the illusion.

The Grasshoppers Strike Back

The Troika puts the blame for the debt crisis on the spendthrift ways of Greece, Ireland, Spain and Portugal, but it was the casino mentality of private investors—backed by the banks—that brought on the current catastrophe.

In short, it was the busy little ants, not the fiddling grasshoppers, that brought down the “distressed four.”

American, German, French and Dutch banks had to know that they were creating an unstable real estate bubble—a 500 percent jump in housing prices is the very definition of the beast—but kept right on lending because they were making out like bandits.

When the bubble popped and Europe went into recession, Greece was forced to apply for a “bailout” from the Troika. In exchange for 172 billion euros, the Greek government instituted an austerity program that saw economic activity decline 25 percent and unemployment rise to 27 percent—and to over 50 percent for young Greeks. The cutbacks slashed pensions, wages and social services, and drove 44 percent of the population into poverty.

Virtually all of the “bailout” funds—89 percent—went to the banks that gambled in the 1999 to 2007 real estate casino. What the Greeks—as well as the Spaniards, Portuguese and Irish—got was misery.

There are other EU countries, meanwhile—including Italy and France—that aren’t quite in the same boat as the “distressed four,” but are nonetheless under pressure to bring down their debt ratios.

But what are those debts?

This past summer, the Committee for a Citizen’s Audit on the Public Debt issued a report on France, a country that is currently instituting austerity measures to bring its debt in line with the magic “3 percent” ratio. The Committee—which refers to itself as a “collective”—was launched in January 2012 following a French petition drive that gathered almost 60,000 signatures. Associated with the Party of the European Left, it’s a polyglot organization with an international focus. “Collectives” are busy all over the world lobbying for debt audits.

What the committee concluded was that 60 percent of the French public debt was “illegitimate.”

More than eighteen other countries, including Brazil, Portugal, Ecuador, Greece and Spain, have done the same “audit.” And in each case, they found that increased public spending was not the cause of deficits. From 1978 to 2012, French public spending actually declined by 2 GDP points.

The main culprit in the debt crisis was a fall in revenues resulting from massive tax cuts for corporations and the wealthy. According to Razmig Keucheyan, sociologist and author of The Left Hemisphere, this “neoliberal mantra” that was supposed to increase investment and employment did the opposite.

The second major reason, according to the debt audit study, was the increase in interest rates, which benefits creditors and speculators. Had interests rates remained stable during the 1990s, debt would be significantly lower.

Keucheyan argues that tax reductions and interest rates are “political decisions,” and that “public deficits do not grow naturally out of the normal course of social life. They are deliberately inflicted on society by the dominant classes to legitimize austerity policies that will allow the transfer of value from the working classes to the wealthy ones.”

The International Labor Organization recently found that wages have, indeed, stalled or declined throughout the EU over the past decade.

The audit movement calls for repudiating debt that results from “the service of private interests” as opposed to the “wellbeing of the people.” In 2008, Ecuador canceled 70 percent of its debt as “illegitimate.”

How this plays out in the current Greek-EU crisis is not clear. The Syriza government is not asking to cancel the debt—though it would certainly like a write-down—but only that it be given time to let the economy grow. The recent four-month deal may give Athens some breathing room, but the ants are still demanding austerity, and tensions are high.

What seems clear is that Germany and its allies are trying to force Syriza into accepting conditions that will undermine its support in Greece and demoralize anti-austerity movements in other countries.

The United States can play a role in this—President Obama has already called for easing the austerity policies—through its domination of the IMF.

By itself, Washington can outvote Germany, the Netherlands and Finland combined, and could exert pressure on the two other Troika members to compromise. Will it? Hard to say, but the Americans are certainly a lot more nervous about Greece exiting the Eurozone than Germany is.

The key to a solution is exploding the myth.

That has already begun. Over the past few weeks, demonstrators in Greece, Spain, Italy, Germany, Portugal, Great Britain, Belgium and Austria have poured into the streets to support Syriza’s stand against the Troika. “The left has to work together having as its common goal the elimination of predatory capitalism,” says Maite Mola, vice president of the European Left organization and Member of the European Parliament. “And the solution should be European.”

In the end, the grasshoppers might just turn Aesop’s fable upside down.