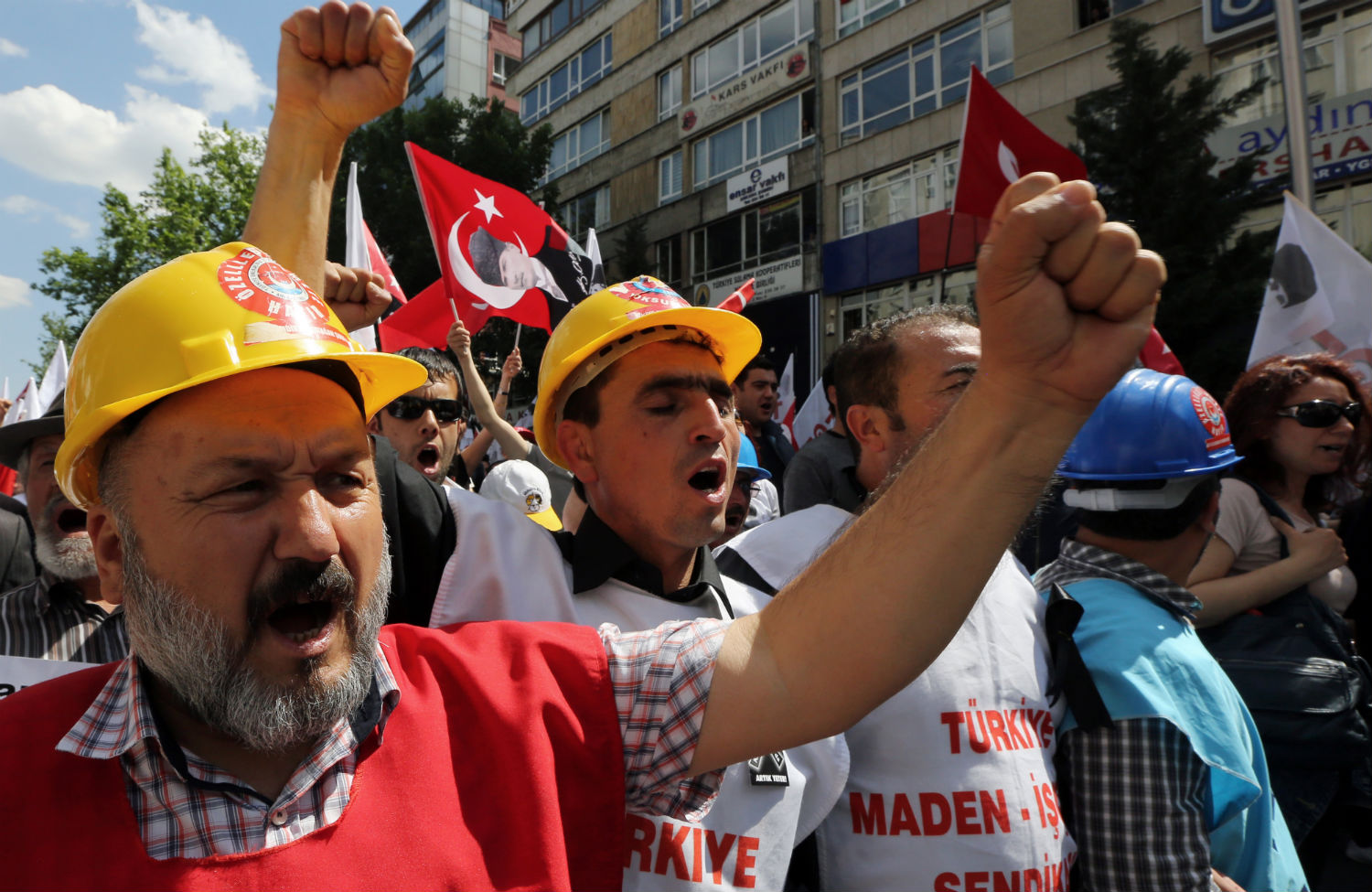 Miners join nearly 2,000 university students who called on the government to resign after the recent mining disaster. (AP Photo/Burhan Ozbilici)

After days of pulling bodies from the ruptured earth, the death toll of the Turkish mine disaster in Soma has plateaued at 301. With their masked faces frozen in agony, their crumpled photographs clutched in the fists of loved ones, the workers and their struggles have become far more visible in death than they were in life.

The names have been accounted for, but not the catastrophe that befell them. What was originally suspected to be an electrical fire was later described by experts as a massive industrial explosion precipitated by long-term negligence, not a mere technical malfunction.

Whatever the exact cause, the government seems committed to avoiding blame. Defying workers’ accounts of horrific safety conditions, Prime Minister Recep Tayyip Erdogan stoked outrage by coldly citing mining accidents of nineteenth-century England and suggesting that such tragedies were “usual.” The mine operator, Soma Holding, claimed the company was not obligated to provide workers with an emergency shelter, insinuating that workers were personally responsible for failing to escape on their own. (According to Today’s Zaman, Turkey is one of just a few countries without such a shelter requirement.)

Erdogan’s government finally responded to international condemnation for the handling of the disaster with a slew of arrests this weekend, including several company officials. But the massive protests that have exploded in several cities may prove difficult to quell any time soon.

Calling for a day of strikes, unions condemned the disaster as industrial homicide, exacerbated by the regime’s earlier crackdowns on labor in response to demands for safety reforms.

In a statement issued on May 15, the day of the strikes, leaders of the progressive Confederation of Turkish Trade Unions (TÜRK-İŞ) decried not only the safety failure but systemic labor violations pervading the mining sector, including precarious subcontract work, union-busting and “workplace murders.”

As the body count climbed, fierce tear-gas-laden demonstrations, clashes with police and mass arrests sprung up in Soma and Izmir. Students at Istanbul Technical University staged an occupation of the mining department, protesting the faculty’s connections with Soma Holding.

Adding injury to insult, an aide to the prime minister was photographed kicking a protester and Erdogan himself reportedly threatened a man who booed him.

“I am really speechless at the moment and what has been happening in Turkey is where the words fail,” said Devrim Duman, international relations officer of the Turkish Metal Workers Union, in an e-mail to The Nation shortly after the Soma incident. Noting widespread fear of the “authoritarian government,” she observed, “police and water cannons are already confronting protesters in the streets who are upset about the situation. The attitude of the government and mining companies should be questioned. Human lives are much more important than the profit of the companies.”

In fact, the opposition Republican People’s Party tried to initiate a formal inquiry into Soma last year, calling for “an investigation into all the mine accidents in Soma to reveal the reasons and those responsible for the deaths in those accidents [and] to find permanent solutions.” The motion was ultimately quashed by the ruling party in late April.

The disaster in Soma only adds to the Turkish mining industry’s ever-increasing body count. Mine industry accidents affected an estimated 13,000 workers in 2013 alone, with more than 1,300 killed on the job since 2000. IndustriALL, an affiliate of the Turkish miners union, has documented a string of fatal disasters every few years since the early 1980s, often linked to methane hazards. International data shows that Turkey is the deadliest country in Europe for work-related fatalities, and third in the world. Turkey’s mine fatality track record ranks even worse than China’s, giving a sad ring of truth to Erdogan’s cavalier comment about mining’s “usual” dangers. Turkey is hardly unique among “developing” economies, however, in its reliance on extractive industries that are singularly dangerous, devastating to public health and the environment.

Turkey has also yet to sign onto the International Labour Organization’s Safety and Health in Mines Convention, which would require safeguards against fires and explosions and provide adequate escape mechanisms.

As in the United States, mine safety is entangled with the industry’s systematic evasion of regulatory oversight. Regulators partner with corporations to enforce a profit structure premised on relentless exploitation of labor and the environment.

Soma was state-run until 2005, when it was privatized under Erdogan’s economic modernization program, which through a competitive bidding process doled out “royalty tenders” to mining companies. Labor activists have condemned both government and privately operated mines for malign neglect.

The head of Soma Holding claimed in a 2012 Hürriyet interview that privatization had enabled the company to squeeze coal mining costs down from around $130 to $140 to under $24 per ton. But those savings did not cheaply for Soma’s workers.

One former longtime mine worker told the Christian Science Monitor that after the mine was privatized, production shot up, but so did the attendant safety risks. With thousands of new workers, he added, “we were using all the same equipment, the old equipment. If the electrical system cannot support that level of output, then you have a critical situation.”

The youngest known victim attests to the price tag of a worker’s life in the new Turkey. A 15-year-old unregistered child laborer, Kemal Yıldız, has become an icon of the catastrophe, representing both the primitive brutality of the industry and the neoliberal efficiency with which the country’s mineral bounty devours workers’ bodies.

The disaster has reenergized a broader call for economic democracy, which erupted on the global stage with the massive Gezi Park protests last year and have continued in recent months with street protests and the regime’s embarrassingly futile battle against social media criticism. The mass unrest now percolating in major cities might mark a new escalation in the grassroots opposition to the AKP, by galvanizing both middle-class secular liberals and working-class populist forces, for once united in their anger at the regime’s corruption and betrayal of the public trust.

The project of holding together a coalition of urban leftists and the marginalized poor reminds some activists of a previous icon of shared compassion. When a Kurdish boy was allegedly killed by police during street protests, he became an icon for middle-class urban activists and marginalized Kurds alike, both outraged by “the terror of the Turkish state through the brutal crackdown of the police on the protesters with water cannons and tear gas,” as student activist Elif Genc put it in ROAR Magazine. Perhaps the broad public will find another martyr in young Yıldız, just the latest sacrifice on the altar of “development.”

Pieter Verstraete, a researcher at Bilgi University in Istanbul, comments, “A blue-collar uprising could be the tipping point—something that has so far been avoided.”

This latest round of street battles just might catalyze a revolt that crosses class and regional divides. Erdogan might be able to occasionally bludgeon poor workers into submission, or to squelch periodic flare-ups of the voice of left activists, but a united opposition is harder to stifle. Too many bodies have been buried in Soma’s shallow grave for dissenters to let themselves be buried by fear.