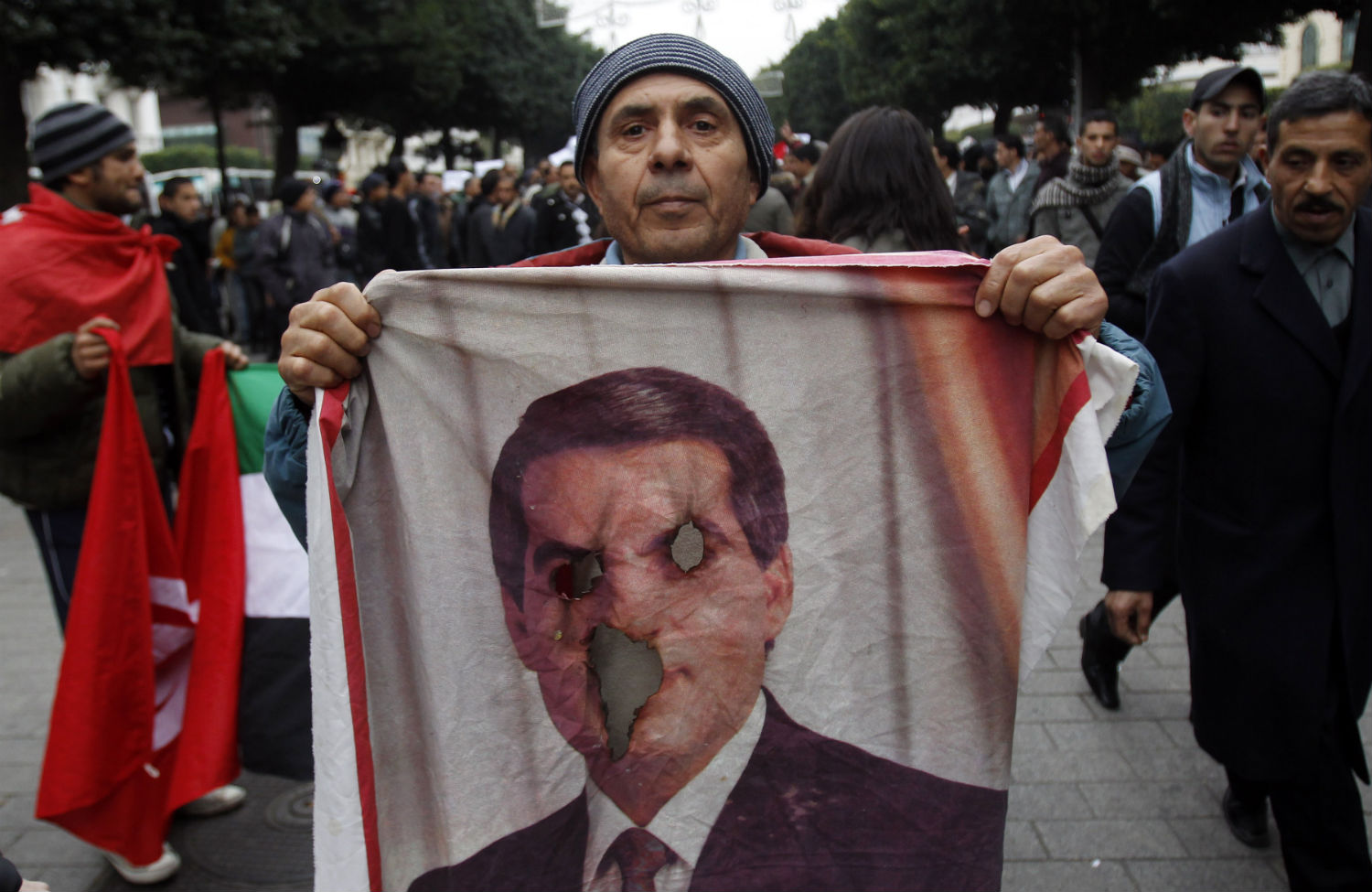 Last August, Ons and Ahlam Delhoumi were in a car on their way back from a party to the provincial Tunisian town of Kasserine. Suddenly, men in dark clothes and masks stepped out onto the road from reeds that lined both sides of the street.

The two women may have thought that the shadowy figures were drug traffickers or jihadists that operate along the nearby Algerian border. The men who stepped into the street, however, were police. Taking the Delhoumis for criminals or extremists, they fired on the car.

Ahlam died immediately from a bullet to the head. Ons died after she arrived at a hospital with no doctors or nurses.

Kasserine is not unlike Sidi Bouzid, another interior town. In late 2010, Mohamed Bouazizi set fire to himself there after suffering humiliation at the hands of the police, who had confiscated the scales and fruit he had bought on credit and consequently robbed him of his livelihood. Protests over his death spread to the capital and sent President Zine El Abidine Ben Ali fleeing, triggering a wave of revolutions among the downtrodden all over the region.

Today Tunisia is the only place where post–Arab Spring democracy seems doable. Its elections in October were a far cry from the show vote that installed Egyptian military leader Abdel Fattah el-Sisi as president last summer.

At the most recent polls, Tunisian voters awarded a plurality of seats to Nidaa Tounes, or “the Call of Tunisia”—a party that gathered secular forces under one umbrella—but didn’t give it a clear majority. Now Nidaa Tounes will have to form a majority government.

It’s a promising transition, but one that could fall apart.

Kasserine’s policemen were jumpy for good reason. Jihadists have regularly killed police and soldiers here. Firefights happen almost every other day and drones fly overhead, searching the scrub and prickly pear in what looks like the Colorado foothills for jihadis moving across the mountains. The Delhoumis are only two of the many innocent victims of this battle.

The interior of Tunisia is poor, and the state is weaker there than in the coastal cities. These conditions make the area a perfect recruiting ground for Tunisians who want to become jihadists either at home or abroad. Some 3,000 Tunisians are fighting in Syria, and the Interior Ministry says that it has prevented 8,000 more from traveling there.

In the leadup to the election, secularists tried to tie Ennahda—the moderate Islamist party that had previously run the government—to Salafi jihadists. At the polls, voters for Nidaa Tounes—a coalition of former regime figures, leftists and former leftists that gathered together to challenge Ennahda—repeated these charges.

Violent Salafis have made themselves into an uncompromising bloc, while the peaceful ones have accused Ennahda of apostasy and are boycotting elections.

“Nidaa Tounes looks at us and the extremists and says that we are two sides of the same coin,” says Faycal Naceur, who is in charge of Ennahda’s media office. “But we are the biggest victims of this phenomenon. Most of the confrontation [between Salafists and the government] took place under our administration.”

Naceur spoke inside an overflowing office building that Ennahda occupies in downtown Tunis. Voters waiting to ask for favors from officials before the election sit in a makeshift waiting room. Like many other offices here, it is made up of temporary walls to accommodate an organization that has outgrown its lease.

The Troika government, so named because it combined Ennahda with two other liberal parties, allowed some Salafi parties to register. But Ennahda’s conciliatory attitude toward secularists drove the Salafists away, and the Troika government was replaced by an interim government that will remain until after the elections.

Naceur outlines Ennahda’s messaging, which this time around is focused on temporal rather than spiritual issues. Yet as Ennahda is somewhat of an umbrella party for the religious, it still contains a very pious element. More extreme preachers are off the ballot but still on the campaign trail. One, Habib al-Loz, addressed a crowd of tens of thousands of people the week before the polls opened.

“Ennahda hasn’t left its principles,” says Mahfoudh Ban Deraa, an imam in Kasserine. “They will apply Sharia gradually, and this is the preferred way, even according to the Caliph Omar.”

Despite the conception of political Islamist movements as more down to earth, there’s a disconnect between the Ennahda leadership that went into temporary exile during Ben Ali’s secularist rule and those that stayed at home with the base.

“Abroad the leadership learned the ability to listen. Some of those that were in Tunis are a bit suspicious of others,” says Hajer Azaeiz, an Ennahda member. Azaeiz was prohibited from wearing the hijab during Ben Ali’s reign, but later wore it as she helped write the country’s new Constitution.

Naceur had the same take. Arrested in his second year of college, he was imprisoned for ten years and tortured for most of them. As he recounted the details of indignities, the young woman sharing his office looks up for a moment, then continues to flick at her smartphone. When he got out, Naceur refused offers by the security forces for permission to re-enroll in the school of psychology in exchange for informing on Ennahda. He eventually returned, where his former roommate now taught one of his classes.

Other members of the top leadership, like former interior minister and later prime minister Ali Laarayedh, were also imprisoned for years. In a role reversal that could only have happened in a revolution, he became the interior minister in Tunisia’s post-revolutionary government. But when Laarayedh attempted to reform the police, a video was leaked of him allegedly having sex with another male prisoner. For any politician that would be scandalous. For an Islamist, it was especially so, and serious security-sector reform was tabled.

The episode demonstrated the staying power of the police and the old regime. Impunity—like that enjoyed by the killers of the Delhoumis—remains rampant.

Baji Caid Sebsy, an insider octogenarian ousted from the government in the 1970s for advocating freer political competition, leads the Nidaa Tounes movement. He also headed the transition government immediately after Ben Ali’s ouster. The recent reappearance of other old-regime figures has been the source of sporadic controversy among youth in the movement.

This informal partnership between civil society activists and more old-line secularists pushed Ennahda’s Troika government to hand over power to a technocratic interim government last January. Tunisia’s ability to maintain a capable and civil opposition ensured that Ennahda didn’t take too much power, says Hamadi Radissi, a professor of political science at the University of Tunis and a member of Nidaa Tounes.

“Thanks to the balance brought by Nidaa Tounes, Islamists have come to the conclusion that we have to live together,” he says. “And they understood that they have no capacity to Islamize this country thanks to us.”

The divisions inside Nidaa Tounes are more pronounced than Ennahda’s. The party has achieved unity mostly because of its opposition to Islamists, and figures like Radissi don’t plan on staying much longer.

“Believe me, I won’t let them do whatever they want,” he says. “I will leave if they go in a bad direction. And in any case, I’m leaving. I said I would leave when Nidaa Tounes defeats the Islamists.”

On the table are Tunisian sweets that Radissi brought back from Kaiouran, south of Tunis. He speaks with considerable emphasis, sometimes vocalizing his thoughts in French when he is at a loss for the English. When asked what happens when figures like him leave the movement to former regime figures, his answer is less definitive.

“I have no idea,” he says. “This is a personal matter. Pfft! There are some that left before me because some of them said that we are not made for politics.”

Whatever the composition of Tunisia’s new government, which may not be formed until after presidential elections on November 23, it will have to make hard decisions on the economy, which all parties agree is the biggest threat to the revolution’s success.

“In the revolution, people asked for dignity, jobs and freedom,” says Habib Bouazi, a police officer in Kasserine. “We have freedom now—was it ever conceivable in Ben Ali’s time that a police officer like me would sit with a foreign journalist? What we don’t have is infrastructure and jobs, and they have gotten worse since the revolution.”

Kasserine lags far behind the coastal regions in development, and a World Bank report recently took Tunisia to task for the structure of its economy. The Bank described the economy as predatory, benefiting a select few at the expense of most Tunisians.

Ennahda and Nidaa Tounes’s economic visions do not differ substantially, with both emphasizing the free market. Ennahda in particular has gone out of its way to insist that it won’t rock the boat on the economy, and party officials focus mostly on increased investment rather than structural change.

Across Tunisia, there’s a longing for a government that will stay around long enough to address the country’s social and political ailments, including those that arose from the revolution.

Saleh Delhoumi has been told that the investigation into the deaths of his daughter and niece won’t be investigated until after the elections. “I just want the elections to end so they can see these results and those who were responsible can be held accountable,” he says. “We need to move on.”