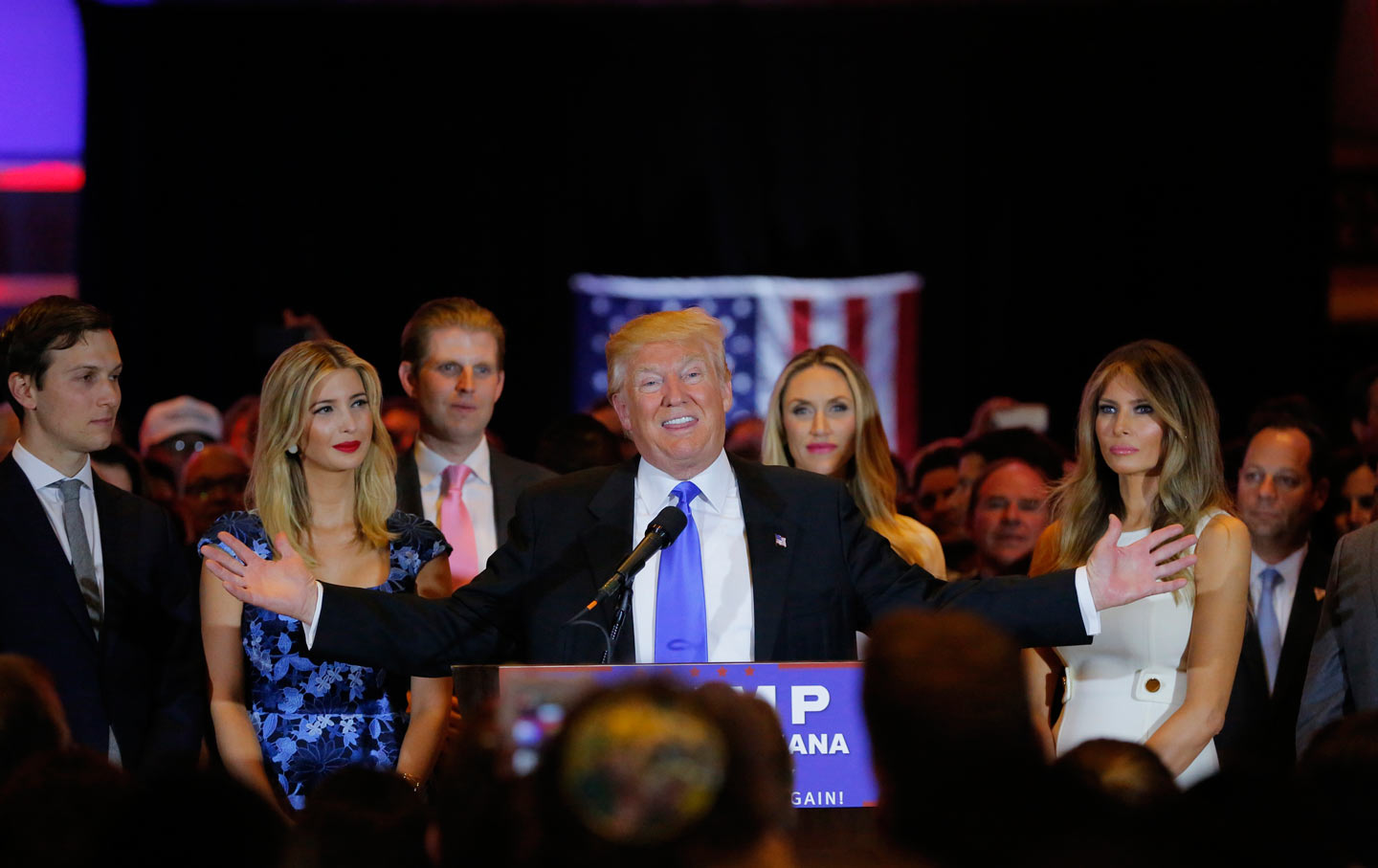 Trump’s “build the wall” immigration agenda isn’t as inflexible as it seems. That hardened border has one exclusive toll booth: It’s called the EB-5 visa, aka “greenbacks for green cards”—known among global investor circles as the EZ Pass to the American Dream.

Through the EB-5 program, the US Citizenship and Immigration Service (USCIS) offers about 10,000 spots annually for foreign investors to purchase at the “front of the queue,” if they promise to sink $500,000 to $1 million in a US-based “development” project. The goal is to give investors priority in the green-card process as a “sweetener” in exchange for investing in commercial ventures that boost employment. But the controversial program, which has exploded since the financial crisis, has been tarnished by links to shady influence-peddling in the backrooms of Trump’s real-estate empire.

The EB-5 bonus, which has been renewed under Trump despite mounting public criticism, flew into the media spotlight after the family firm of Trump’s son-in-law and adviser Jared Kushner allegedly dangled a visa bonus when negotiating a luxury-apartment development proposal with Chinese investors. Yet the deal reflects problems deeper than hints of conflict of interest. The EB-5 symbolizes the corporate corruption festering throughout Washington’s broken-border policies.

Under the current rules (which policy-makers are now seeking to overhaul), a $1 million investment in a proposed business project can score an immigrant a visa as long as the petitioner shows it will create “10 permanent full-time jobs.” There’s also a discount option in which an investment of $500,000 qualifies for a visa if sited in a “targeted employment area,” like a blighted urban neighborhood, or a rural area outside of a metropolitan region. But, aside from those broad geographic criteria, the specific mandates on what project investors are intended to produce are extremely vague. For years critics have argued that the fast track to legal residency merely creates another platform for gentrification that makes a mockery out of both the visa system and the notion of government-driven job creation.

Nevertheless, Trump’s plans for the EB-5 program aren’t all that different from past immigration policy: Access to visas has often turned on wealth and privilege, especially for immigrants who are Trump’s kind of people—wealthy investors—and therefore “the good kind” of immigrant.

There’s precious little data on whether any of these real-estate deals have translated into real economic advancement for communities. A recent Government Accountability Office audit revealed that “approximately 26 percent of all EB-5 investors who entered the program…may not have completed the process to show funds spent and jobs created.” Besides, jobs numbers are notoriously easy to fudge. Instead of proving how many jobs their businesses directly support—as in permanent staff or local contractors—“immigrant investors generally claim indirect jobs, rather than direct jobs.”

According to Daniel Costa, an analyst at Economic Policy Institute, under the current criteria, even if one builds in a targeted employment area, authorities “don’t know if people who live in the high-unemployment areas are even getting hired or if they’re given preference for hiring, and/or how many have actually been hired.”

As CityLab reported earlier this year, these regions are often easy to “gerrymander” by rigging Census-tract counts, so that an investor can claim his 20-story glass-and-steel office tower is helping to “develop” the East Harlem neighborhood with which it happens to share a tract. Cities fish for foreign investors by bending the data in EB-5 applications, and the USCIS is co-opted as an indirect agent of exorbitant real-estate deals dressed up as “job creation” on paper. Such shovel-ready foreign-funded stimulus has lately taken the forms of a Waldorf Astoria hotel in Beverly Hills, and a skyscraper hotel at 1 Park Row that bills itself as “your perfect refuge in the middle of Manhattan.”

But while the logic of the program, to allow immigrants to invest in US economic growth, may seem like a win-win for visa holders and cash-strapped towns and cities, the program’s loopholes seem to be sprinkling white elephants on the landscape with no sign of sustainable job creation. And, ironically, the flood of immigrant investment is helping displace poor immigrant communities that have been strafed by housing gentrification.

Aside from the ethical conflicts inherent in any kind of legal privilege handed to favored wealthy investors, EB-5 arguably further perverts the integrity of the immigration system by basing exemptions essentially on wealth, rather than any kind of humanitarian or social-need-based criteria.

There are signs that some EB-5 money comes through possibly corrupt or illicit business dealings abroad, suggesting that visas are used as de facto laundering schemes. Another concern is that many of the affluent Chinese investors who get the vast majority of visas do not resettle in America but instead purchase placeholder investment properties.

With so little known about where the money originates or goes, the controversies around EB-5 reflect complex dilemmas over what fair immigration policy should entail.

The USCIS has claimed it will establish a more robust tracking system sometime in fiscal 2017. Basic reforms that might fix the worst abuses of the program include expanding requirements for reporting and transparency, strengthening criteria for qualifying for an EB-5 visa with more targeted job requirements, and setting higher standards for demonstrating the project’s concrete impacts on fostering local development. All this demands, on the part of host communities, a more holistic approach to defining “job creation”: Does promoting job growth mean constructing high-end office towers with non-union builders, designing high-tech manufacturing hubs, launching greener transit infrastructure, or planting more empty high-rises in midtown?

Critics on the left and right have demanded reform, and some want the EB-5 program simply shut down altogether. But the program was recently renewed by Congress, and lawmakers seem more focused on pushing other policies to crack down on poorer immigrant communities.

To attract genuine immigrant investors, Trump ought to dismantle his fantasy wall and recognize the real investment immigrants have made throughout history: the sweat equity they’ve poured into urban bridges and railroads and farmlands. The communities who for generations have pumped life into the poorest neighborhoods of our cities, and the people who feed the country today with their backbreaking harvest labor, have a real stake on American soil—and they aren’t asking for a golden ticket, but only a fair chance.