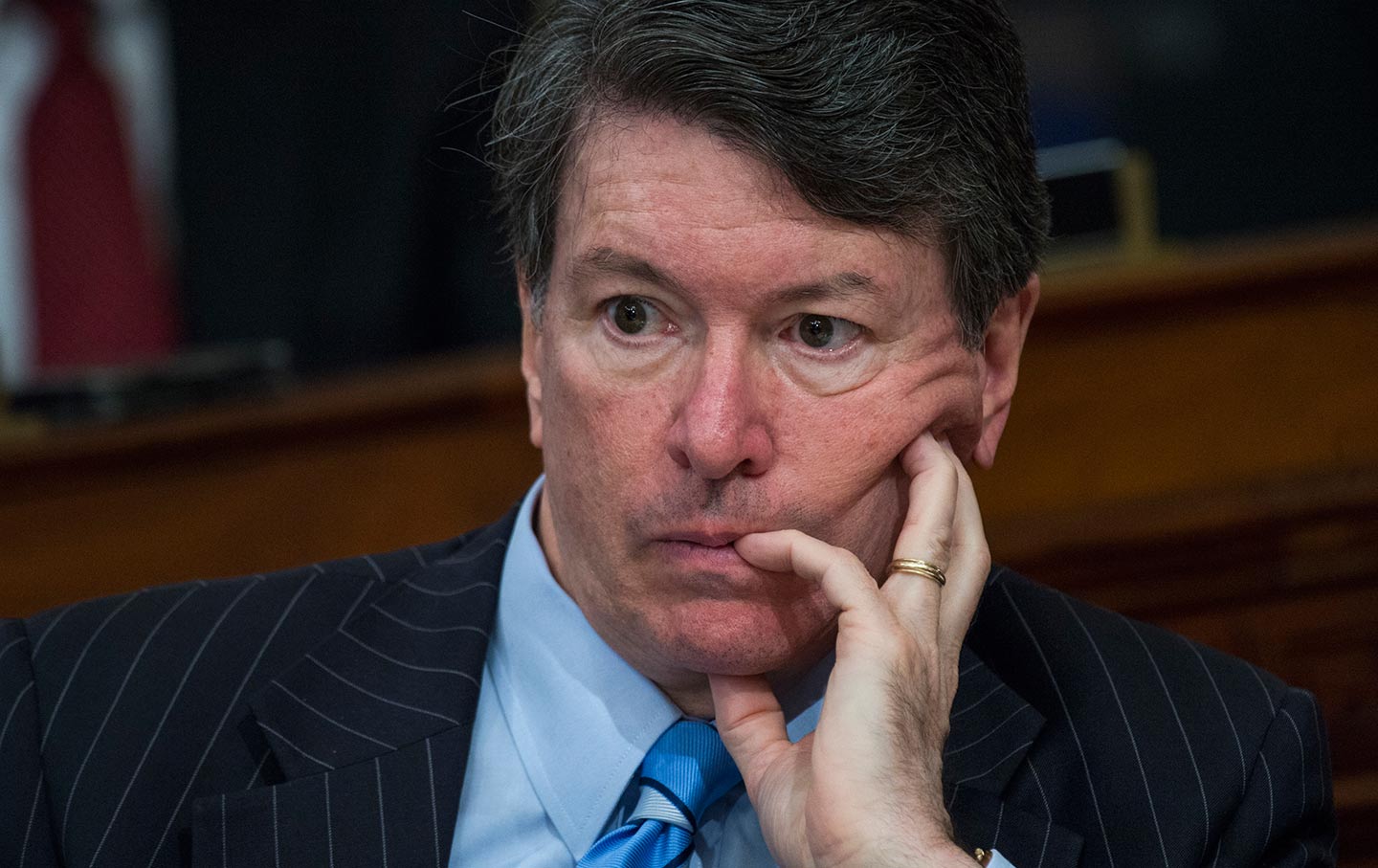 In one of the tightest swing districts in the country, one of the most vulnerable Republican incumbents is running an unabashedly Trump-like campaign. Representative John Faso represents New York’s 19th district—a microcosm of the country, closely divided between densely populated, deep-blue towns and long expanses of rural red—and he isn’t talking about Trump’s tax cuts (House leaders let him vote against them) or focusing on any other issues of substance. He certainly isn’t talking about health care, after voting to strip coverage from almost 10 percent of his constituents. Instead, the centerpiece of his campaign has been claiming that MS-13 gangsters are coming to kill us all, and promising to address the contrived “issue” of low-level drug dealers being arrested with SNAP benefit cards in their pockets.

Faso didn’t face a primary challenger, so this isn’t about throwing red meat to the base to secure the nomination. What we’ve seen so far is likely to be his pitch for reelection. And it’s striking to see a politician who won this relatively purple district in 2016 by portraying himself as a moderate Republican, critical of Trump’s campaign, now choose a strategy that seems more appropriate for a deep-red district in the Bible Belt. (Faso’s popular predecessor, Chris Gibson, was arguably one of the last moderate Republicans in the House.)

This time out, Faso has chosen to run on classic appeals to white racial anxiety. According to the Center for Immigration Studies, a right-wing, restrictionist group that doesn’t shy from trumpeting the ostensible dangers of MS-13, no member of the gang has ever been arrested in the district. Journalist Hannah Dreier, who has been covering MS-13 for years, reported that while MS-13 is notably brutal, it is small compared to other gangs, hasn’t grown in membership in recent years, and almost never targets “true outsiders—people who are not friends with any gang members or targets for recruitment.” While MS-13 is not the transnational powerhouse conservatives describe, Drier noted, “it is the US gang most strongly tied to Central America, which is where the majority of asylum-seeking teenagers come from.”

“In that way,” said Drier, “it’s the perfect focal point for Trump’s message of closed borders.”

The food-stamp claim may be more insidious, as it’s part of a larger Republican push to attack the program. According to the Albany Times-Union, “Rep. John Faso is doubling down on his push to place stricter work requirements on SNAP recipients” by suggesting that SNAP is plagued by widespread fraud. The reality, as noted by the US Department of Agriculture’s own watchdog, is that the program’s fraud rate was just 0.9 percent in 2016—up slightly from 0.6 percent the year before. And while the implication is that wealthy, Scarface-esque, drug kingpins are being busted with SNAP benefit cards, back in the 1990s a researcher at the University of Chicago found that low-level members of drug organizations—the kind of people who are most likely to be apprehended by police—were making $3.30 per hour, on average. It’s true that they probably don’t report their income, but that’s also the case with many other low-income workers in the gray economy who genuinely need nutritional support.

Faso’s gambit is risky. Last month, Democratic pollster Stanley Greenberg wrote in The New York Times that Trump’s rhetoric is not only “making Democratic base voters even angrier than you might expect,” but his “red meat strategy” also “gets a decidedly less enthusiastic response with Catholic and nonreligious conservatives.” Greenberg noted that 71 percent of Tea Party supporters strongly approve of Trump, but that’s only true of 31 percent of moderate Republicans. (Again, New York’s 19th isn’t a deep-red congressional district.)

Democratic voters chose Antonio Delgado to run against Faso in November. Delgado is a gifted, charismatic attorney, a graduate of Harvard Law and a Rhodes scholar. With the backing of the progressive grassroots organization Citizen Action, and early support from the Congressional Hispanic Caucus, Delgado should be a formidable opponent for Faso. Delgado is also African-American, and cut a hip-hop album with a cover that depicts him staring out from under a hoodie. It will be interesting to see what lines of attack Faso pursues against him in the coming months.

Given his district and his competition, Faso may be especially vulnerable, but he’s not the only Republican grappling with the best way to navigate Trump’s first midterm cycle. Republicans in competitive races across the country are walking a tight-rope: If they embrace Trump and his extreme brand of dog-whistle politics too closely, they risk further firing up an already enthusiastic Democratic base. At the same time, according to a June Gallup poll, Trump enjoys an 87 percent favorability rating among self-identified Republicans, so GOP candidates distancing themselves from their president risk demobilizing their most energized, reliable voters.

After his loss in a congressional primary earlier this month, former South Carolina governor Mark Sanford wrote that “the operative question” in his race “was not about conservative policies that are normally the lifeblood of a Republican primary, but rather who on the ballot would more loyally support the president.”

“I wasn’t Trump enough in the age of Trump,” Sanford decided, “and so indeed I lost.”

The decisions Republicans make in navigating this difficult electoral terrain, and whether those who choose to channel Trump’s style of racist demagoguery are rewarded or punished at the polls this fall, could affect US politics well beyond any particular midterm race.

Until recently, there was something approaching a consensus among political scientists that politicians had to tread cautiously when appealing to white racial grievances. If they were too obvious about it—if they eschewed subtle, coded messages for blatant bigotry—voters had a tendency to reject them as too divisive. That view was overturned by Trump’s Electoral College victory in 2016. Now, two years later, if it turns out that conservatives can turn out their base with hyper-charged appeals to racial grievance without paying a price for it, we can expect Trump-like demagoguery to become a fixture of Republican messaging. If, on the other hand, those kinds of candidates face a demonstrable backlash, the calculus will be very different.

Early results from a small sample of special elections could suggest a backlash is brewing. Republican gubernatorial candidates Ed Gillespie in Virginia and Kim Guadagno in New Jersey both blanketed the air with ads featuring hazy images of dangerous-looking, brown “gang members” and lost by wide margins. In Pennsylvania’s very Republican 18th Congressional District, Republican Rick Saccone’s closing argument in a March special election was, “Democrats love illegals and hate God.” (Saccone subsequently lost to Democrat Conor Lamb by less than 1,000 votes in a district Trump won by 20 percent.) Republicans have made attacks on immigration “a key component of their political strategy,” according to America’s Voice, a group that advocates for immigrant rights. And, as the group notes, from the special election for US Senate in Alabama to local races in states like New York and Florida, “the anti-immigrant strategy failed.”

Of course, for Faso, as for a number of Republican candidates across the country, the real test will come in November.