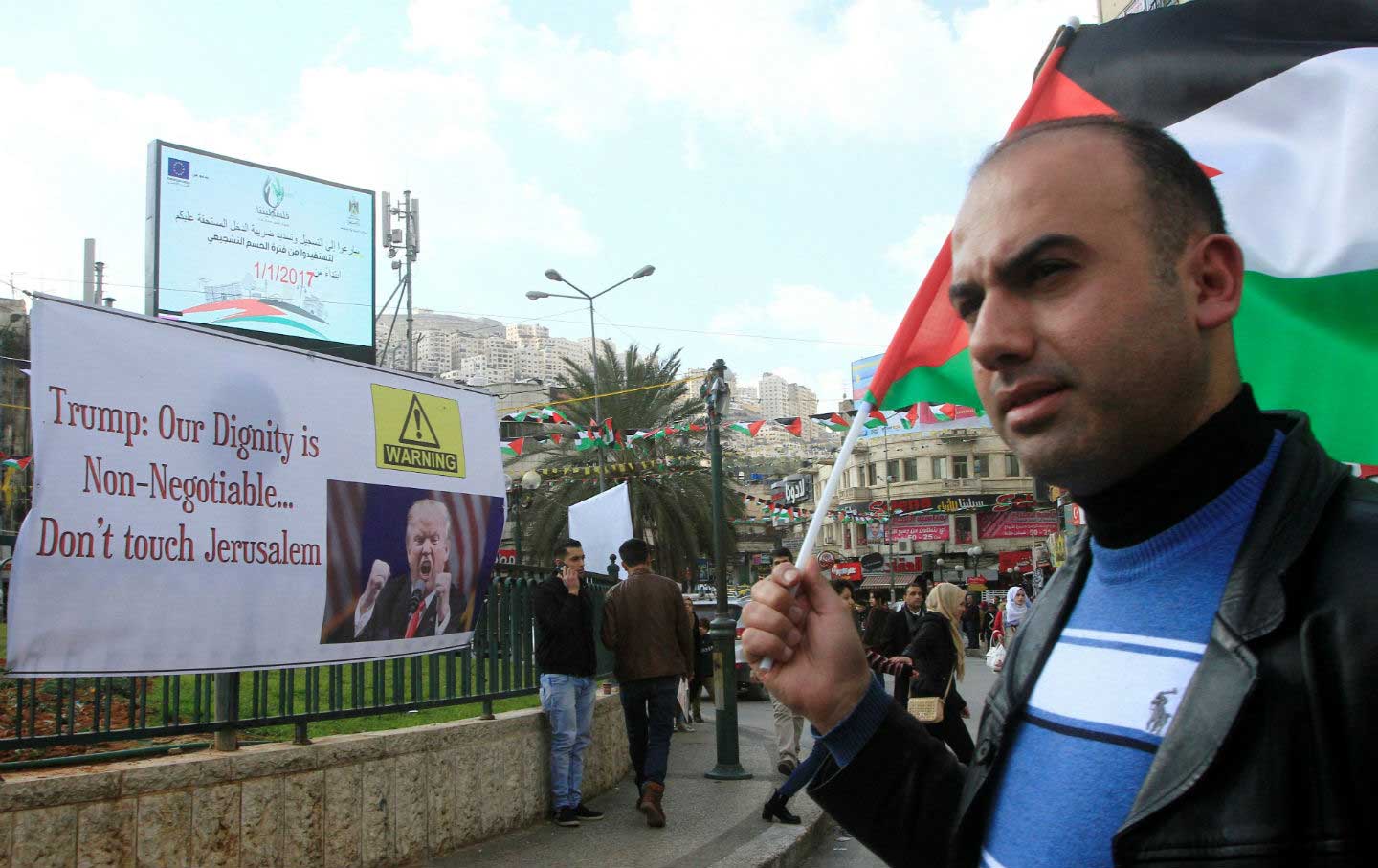 A demonstrator holds a Palestinian flag during a January 19, 2017, protest against a promise by President Donald Trump to relocate the US embassy to Jerusalem, Israel. (Reuters / Abed Omar Qusini)

Once again, the future of Palestine is being decided behind the back of the Palestinians. Once again, they have been made invisible. In 1917, when the Balfour Declaration was being crafted in the British cabinet, Zionist leader Chaim Weizmann had direct access to key decision-makers. It was a privilege not extended to any Palestinian. “In Palestine,” Balfour himself said, “we do not propose even to go through the form of consulting the wishes of the present inhabitants of the country.” Weizmann also had direct access to President Truman in 1947 when the United States pushed through the United Nations General Assembly partition resolution that gave more than half of Palestine to the 30 percent that made up its Jewish minority. There were no Palestinian representatives at the United Nations then, nor in 1967, when the Security Council adopted resolution 242, which called, vaguely, for “a just settlement of the refugee problem,” while ignoring all other aspects of the Palestine question. This pattern of disregard for Palestinian rights and interests continued under subsequent US administrations, each of which has generally acted as “Israel’s attorney.”

Thus, there was nothing new when Donald Trump and Benjamin Netanyahu ignored Palestinian rights and concerns at their joint White House press conference last week.

After Trump casually upended over two decades of US Middle East policy by talking airily of one state or two, whichever one “both parties like,” his Israeli guest quickly laid down a precondition for any peace agreement: “Israel must retain the overriding security control over the entire area west of the Jordan River.” Netanyahu thereby proclaimed a permanent regime of occupation and colonization, ruling out a sovereign independent Palestinian state, whatever fictions of “statehood” or “autonomy” are dreamed up to conceal this brutal reality. Trump’s subsequent silence amounts to the blessing of the US government for this grotesque vision of enduring subjugation and dispossession for the Palestinians.

Trump’s administration has already moved the goalposts as far as Palestine is concerned. Settlements, previously regarded as illegal, illegitimate, and obstacles to peace, now “may not be helpful.” The president has said it would be “nice” if the Israelis did not expand them, but his administration has not reacted to the massive settlement expansions announced by the Israeli government in recent weeks. Similarly, Jerusalem has gone from being an issue that must only be resolved between the parties to the United States essentially reinforcing Israel’s exclusive claim to the city by “very, very strongly” considering moving its embassy there.

Earlier administrations at least pretended to consult the Palestinians. In practice, of course, they continued to give Israel effective prior veto power over any US peace proposal, as per a secret 1975 letter from President Ford to Prime Minister Rabin. But the new administration has dropped even the charade of consultation. Since before the inauguration, the Palestinian Authority has apparently not been able to get anyone of importance in the Trump team to meet with its representatives or even take their calls, while the president and his aides, including his chosen Middle East emissary and son-in-law, Jared Kushner, have been in close touch with the Netanyahu government all along.

The evening before the Trump-Netanyahu meeting in Washington, new CIA chief Mike Pompeo finally met with Mahmoud Abbas, president of the Palestinian Authority, in Ramallah. It was quite in keeping with past American precedents of casual contempt for them that, while the Israeli Prime Minister was being feted by the American chief executive, the Palestinians were entitled only to a visit from the administration’s chief spymaster.

There is another old-new twist in the Trump administration playbook: an attempt to persuade the United States’ Arab clients to put pressure on the Palestinians to accept Israeli-American desiderata. This is a tried and tested tactic, initially employed by the British in response to the Palestinians’ stubborn reluctance to abandon their quest for independence from colonial rule. London utilized it in the late 1930s and in the 1940s, calling upon pliable Arab leaders like Iraqi Prime Minister Nuri al-Said to put pressure on the Palestinians to make concessions.

The United States has often adopted this tactic in the past as well, utilizing its coterie of client Arab monarchies and dictatorships to force compromises on the Palestinians. As an advisor to the Palestinian delegation during the pre-Oslo 1991-’93 Palestinian-Israeli negotiations, I was told bluntly by a senior American official that, if the Palestinians did not agree to the terms on offer, the United States would get the Arab Gulf countries to pressure them. This approach is being resuscitated by the new administration, in collaboration with Israel, whose right-wing government has increasingly close relations with the Arab Gulf states. After Netanyahu said that Israel looked forward to “involving our newfound Arab partners in the pursuit of a broader peace and peace with the Palestinians,” Trump confirmed that the two sides had been discussing the possibility of bringing “many, many countries” into the deal he would try to make.

For an idea of what Trump and Netanyahu are hoping to bully the Palestinians into accepting with the help of their pliable Arab friends, one need look no farther than Menachem Begin’s 1977-’78 plan for Palestinian autonomy, a resuscitated version of which is currently being bandied about by leaders of Netanyahu Likud party and their surrogates in think tanks inside the Beltway. Under this plan there was to be “autonomy” for the Palestinians but not for the land they stand on. In other words, no real autonomy, and no real sovereignty.

Given the collapse of any form of pan-Arab solidarity, with the Gulf monarchies ever closer to Israel while Syria, Iraq, Libya, and Yemen are torn by civil and proxy wars; and with the current state of Palestinian disarray marked by feeble, unrepresentative, and unpopular leaderships surviving precariously in Ramallah and Gaza, it can be seen why the moment seems propitious to Netanyahu and Trump for a “deal” at the expense of the Palestinians.

But a deal that amounts to a one-state solution—that state being Israel—has perils neither of these two men can admit. In the century since the time of Balfour, the success of the Zionist project has depended largely on selling to international public opinion a glittering vision that essentially excluded the Palestinians, and whose realization depended on massive European and American support. But it is growing increasingly difficult to conceal the fact that, at its heart, this is a vision of a future for Palestinians that is separate but profoundly unequal.

A deal that amounts to a one state solution—that state being Israel—has perils neither Trump nor Netanyahu can admit.

Even if many of those who voted for Trump have no problem with gross inequality, most Americans do. The realization that this is precisely what is at stake in the struggle of the Palestinian people is especially strong among Democrats. According to a December Brookings Institution poll, 60 percent of Democrats and 46 percent of all Americans would support sanctions against Israel over settlement construction, up from 49 percent and 37 percent, respectively, over the previous year. And a Pew poll released in January found that for the first time, the percentage of Democrats who side with the Palestinians is about equal to those who side with Israel, while liberal Democrats sympathize more with the Palestinians by a margin of 38 percent to 26 percent.

If confirmation of the profound shift that is taking place in American attitudes towards Israel and Palestine is required, one need only look at the signs coming from the secular religion of most Americans: football. Six of 11 football players who had been booked to go on a propaganda tour of Israel declined to do so because, in the words of one of them, Michael Bennett, “I will not be used” by the Israeli government. These echoes of James Baldwin’s “I am not your Negro” reveal the way things are coming together in the American public imaginary. What Israel does to the Palestinians is increasingly being seen as akin to Jim Crow and apartheid, and the call for boycotts, divestment, and sanctions as comparable to earlier boycotts in Montgomery, Greensboro, and South Africa.

For these reasons, whatever the Trump administration, the Netanyahu government, and their cronies in the undemocratic Arab regimes are cooking up for the Palestinians, ultimately it will not pass, because the Palestinian people will not accept it, and because it will not be acceptable to Americans or Europeans of good faith.