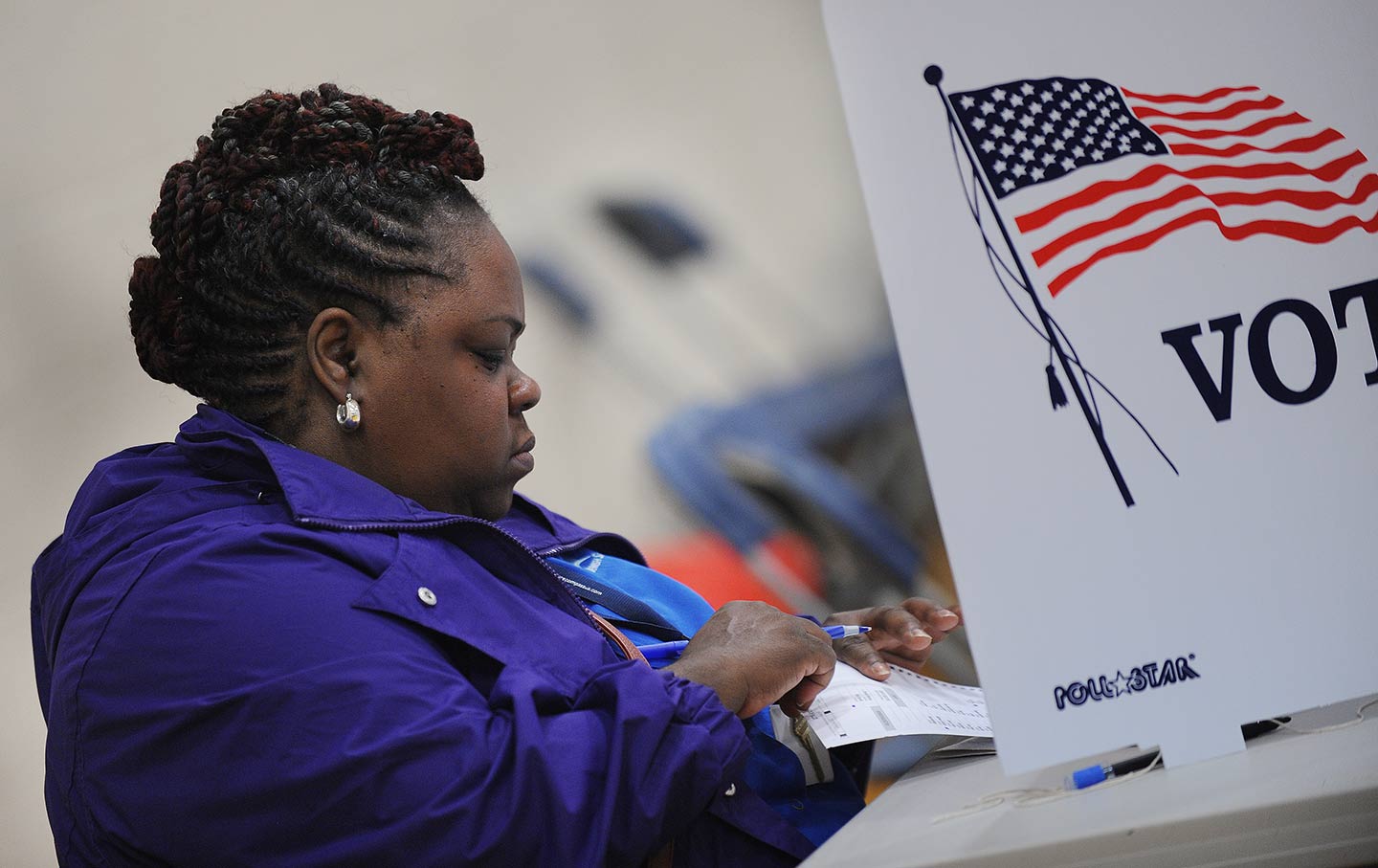 Istar Tyler reads over the ballot while voting at a polling station in Waterford, Michigan, on November 8, 2016. (AP Photo / Brandy Baker)

Less than a month after Donald Trump unexpectedly carried Michigan by 10,000 votes, Republicans in the state legislature are already pushing to make it harder to vote. The presidential recount hasn’t even finished yet and Michigan Republicans are trying to pass a strict voter-ID law through the lame-duck legislative session before the end of this year.

Under current Michigan law, a voter who does not present photo ID at the polls can sign an affidavit confirming their identify, under penalty of perjury, and cast a regular ballot. Under the new bill, which passed the House Elections Commission on a 5-3 party-line vote on December 1, voters without strict ID would have to cast a provisional ballot and then return to their local clerk’s office within 10 days of the election with photo ID to have their votes counted.

This change to Michigan’s election laws could make a big difference in future elections: 18,339 people without strict photo ID used the affidavit option to vote in 2016—8,000 votes greater than Trump’s margin of victory. One-third of the affidavits came from Detroit, where Hillary Clinton won 67 percent of the vote in Wayne County.

Already, Trump’s discredited lie that “millions” voted illegally in 2016 seems to be impacting Republican actions. “A multitude of candidates have raised the concerns about the integrity of elections,” said GOP Representative Lisa Lyons, who sponsored the bill. “We need to respond to those questions. We are going to make sure that we’re protecting you—all voters—and the integrity of the election.”

Like Trump, Lyons presented no evidence of voter impersonation or other types of fraud to justify her bill. She passed the bill in her committee after just two days of testimony last week, when the rest of the state was preoccupied with the recount. The bill included $10 million to pay for the voter-ID law, which sounds like a good thing, but makes it impossible for voters to overturn the law via referendum.

“Donald Trump tweeted that millions had voted illegally and 48 hours later this bill popped up out of nowhere,” says Dan Korobkin, deputy legal director for the Michigan ACLU. “That’s either a giant coincidence or a very concerted effort to disenfranchise people at the state and local level based on lies.”

Despite their stated concern for voter fraud, Michigan Republicans on Friday sued to block a recount of the state’s presidential votes, which would’ve ensured the accuracy of the final count. The brief by Michigan Attorney General Bill Schuette criticized Jill Stein because “she cited no evidence of fraud or mistake in the canvass of votes,” even though a similar paucity of fraud hasn’t stopped Republicans from pushing for voter ID.

Michigan election officials urged the House not to pass the measure. “I am about the only clerk who can be here today because of the massive recount we’re preparing for,” said Kent County clerk Mary Hollinrake. “This comes as a large surprise. We have not had time to look at these bills.”

“The effective consequence of this bill is to disenfranchise hundreds of thousands of eligible voters in Michigan,” says the ACLU’s Korobkin. “As far as we know, there are virtually no instances of voter impersonation in Michigan. It’s nothing even close to a systematic problem.”

The fact that Michigan Republicans are pushing a strict voter-ID law so soon after the election, despite no evidence of fraud, signals that Republicans will intensify their push to restrict voting rights in the Trump era. On the Sunday talk shows, top Republicans like Mike Pence, Reince Preibus, and Paul Ryan refused to condemn Trump’s lie that millions voted illegally, laying the groundwork for a massive war on voting. “Whether there’s widespread voter fraud or not,” the executive director of the North Carolina Republican Party said recently, “the people believe there is.”

This is happening in other states as well.

In Wisconsin, Republican leaders called for cutting early voting, again, after high early-voting turnout in Democratic cities like Madison and Milwaukee. “We’re probably going to have to look at it again to make sure that everybody in the state has the same chance to vote,” said House Speaker Robin Vos.

In Texas, Lt. Gov. Dan Patrick has called for reviving the state’s strict voter-ID law, which has repeatedly been struck down as discriminatory by federal courts, listing it as one of his top 10 priorities for the 2017 legislative sessions. “I know we’re going to do photo voter ID again,” he said.

The push to make it harder to vote is especially concerning in Michigan given how the state has already subverted local democracy through the emergency-manager law, which has had disastrous consequences in cities like Flint. Half of African Americans in Michigan live in cities that no longer have local control. When voters overturned the emergency-manager law in 2012 via referendum, Republicans in the legislature took only 13 days to pass a new one.

The state’s attempt to ban straight-ticket voting was blocked in 2016 by federal courts, which found it had “a disproportionate burden on African Americans’ right to vote” and would lead to longer lines in cities like Detroit.

Michigan already has some of the worst voting laws in the country—there’s no early voting or same-day registration, you need an excuse to get an absentee ballot and there are frequently three-to-four hour lines in urban areas like Detroit. Moreover, the process for obtaining a driver’s license or state ID in Michigan can be incredibly complex, as this chart tweeted by Dale Ho of the ACLU shows:

Process for getting an ID in Michigan pic.twitter.com/epewEDezEA

According to the secretary of state’s instructions, “There may be some applicants who simply are not eligible for a driver license or personal identification card because we cannot adequately identify them.” If that applies to IDs for voting, it means the new law will almost certainly prevent eligible voters from casting a ballot.

In 2012, Governor Rick Snyder vetoed bills requiring proof of citizenship and photo ID to get an absentee ballot. With Snyder’s approval ratings plummeting because of Flint, can the governor again do the right thing?