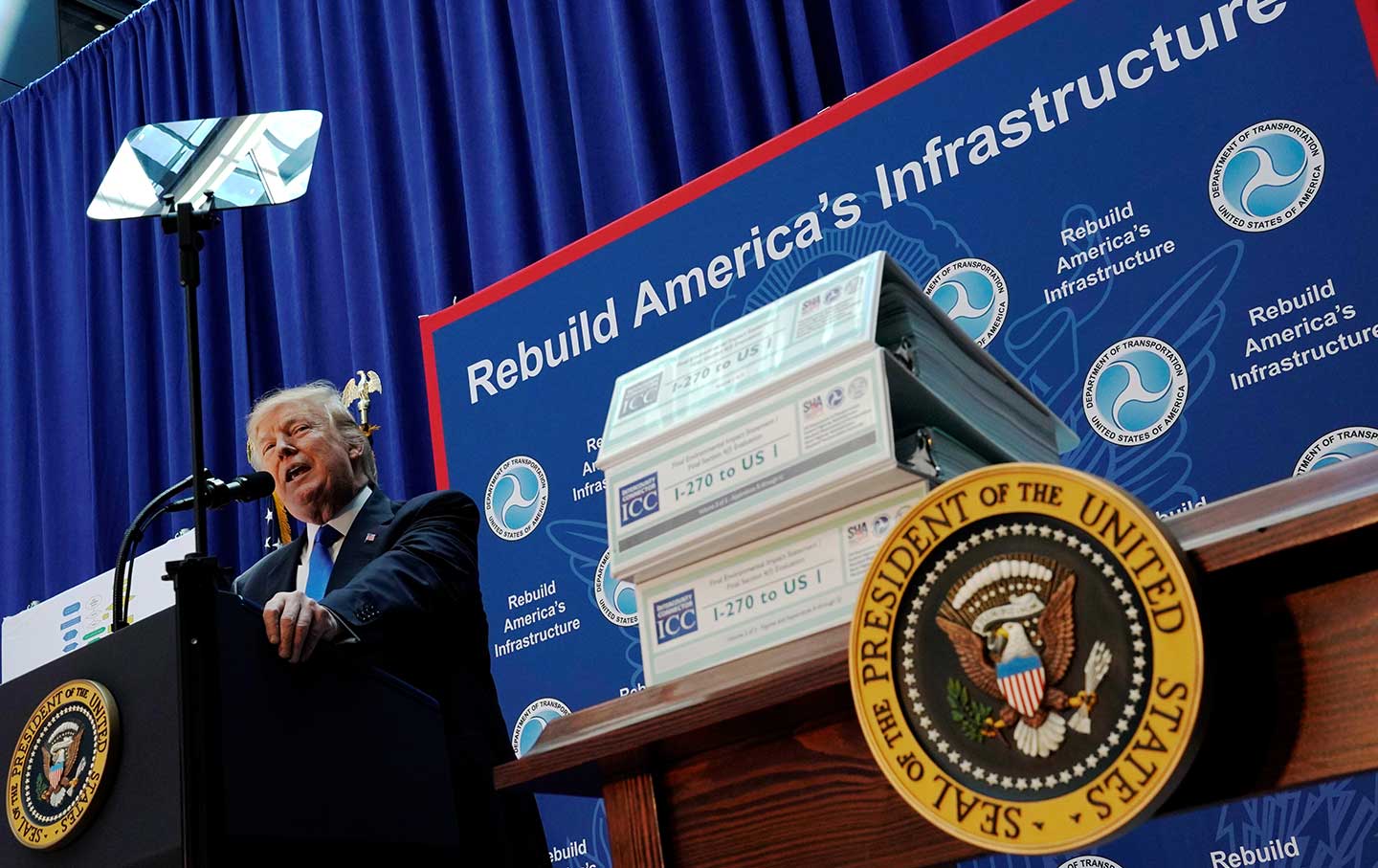 US President Donald Trump delivers remarks on infrastructure improvements at the Department of Transportation in Washington on June 9, 2017. (Reuters / Jonathan Ernst)

When politicians roll out their glossy infrastructure plans, they tend to bite off more than they can chew. President Trump’s new plan just orders everything on the menu, leaves after a few bites, and sticks taxpayers with the bill. Not only does his 50-page plan offer no new ideas or a concrete vision for investing in urgent infrastructural needs, it also shovels more authority to corporations for yet another spending spree on the public dime.

Trump’s agenda starts with an absurdly low sum of $200 billion, and Trump expects to conjure up the remaining trillion with an “incentive” scheme that would dangle about half of the federal funds before private firms for open-ended, deregulated projects. The plan promises to lard up the conventional bond structure to open more public resources to private financing. This corporate handout is also constrained by an overarching asymmetrical state-federal split. Now, with 80 percent of funds to be generated from non-federal sources, according to an analysis by In the Public Interest (ITPI), “Many cities and states will be unable to generate sufficient new revenues to meet infrastructure needs, especially as the new tax law increases the tax burden on many families.”

According to Georgetown University labor historian Joseph McCartin, “The lack of funding commitments from governments will in turn open the door to the increasing privatization of public resources, including even highways, bridges, and the nation’s air traffic control system. Indeed, the plan appears more intent on shoring up the privatization movement than shoring up our crumbling infrastructure.”

With a cost-share heavily skewed toward corporations and local authorities, the deluxe privatization program would scale up a current pilot scheme to promote a nationwide windfall of public-private partnerships. Major pillars of our transport systems and utilities sectors would be drastically deregulated and potentially opened to the profiteering of corporate financiers. This includes removing current limits on corporate airport takeovers, and opening federal assets like the Tennessee Valley Authority to a Wall Street feeding frenzy. Trump would even commercialize interstate rest areas (goodbye picnic tables, hello fast-food courts). While such partnerships are already a mainstay of infrastructure development at the state and federal levels, Trump’s plan would expand corporate involvement in tax-exempt bond financing, by promoting funding for corporate-sponsored infrastructure projects that “a state or local authority leases…to a private business.”

So corporations will celebrate Trump’s high-energy plan for state capture. But for the average Joe watching Trump’s State of the Union Address, the big selling point for the infrastructure plan wasn’t necessarily launching monumental public works, or even marketable projects for private developers: It was jobs, jobs, jobs. And no, we’re not getting that, either. The plan instead says surprisingly little about labor, other than some overtures about “workforce development,” seemingly centered on a sprinkle of federal subsidies on vocational education (perhaps channeling funds into notorious for-profit diploma mills masked as “vocational institutes,” which have undergone massive fraud scandals over the years).

This development is not tied to meaningful targets for equitable, family-sustaining jobs or “high road” labor standards to ensure decent benefits and working conditions. In fact, the plan specifically seeks to dismantle the labor mandates, such as using union labor in these partnerships, which the administration considers an unnecessary “constraint” that “impedes the greater use of public-private and public-public partnerships.” ITPI notes this would effectively “eliminate the program requirement that participants utilize existing union staff.”

Community advocacy groups say Trump’s plan isn’t just inadequate; it’s designed to cheat working-class communities out of the jobs they need and the public benefits they deserve. According to Partnership for Working Families, Trump’s blatantly pro-privatization program offers “No meaningful investment in housing, transportation, clean water, and quality schools, which is the kind of infrastructure investment that would have the broadest positive effect on working families.”

Workers might struggle to simply get to work on time, because a “lack [of] affordable housing in city centers” and a shortage of reliable, affordable public transit will mire them in hours-long commutes. Others might never get hired all, because Trump aims to “speed up” projects by allowing corporations to import workers from neighboring states rather than investing in local communities by, for example, guaranteeing a local jobs pipeline or targeting training programs to deliver in-demand skills to poor neighborhoods.

Trump’s blueprint seems inspired by the privatization disaster that Vice President Mike Pence presided over as governor of Indiana—a chronically delayed, mismanaged subcontracting scheme led by Isolux, a Spanish firm with no prior US construction experience and a record of infrastructure scandals in Spain.

States and communities are not lacking innovative projects ideas (in 2017, 90 percent of local ballot initiatives for transit investments were greenlit); they don’t need Trump’s pro-business inspiration; they need a national infrastructure program that will lift up communities in the process. This requires sustained funding both to restore aging infrastructure and to boost resilience against future environmental or social crises, such as public-communications technology (not tax cuts for Big Telcos) and green-energy transportation programs to revamp collapsing transit systems (not another government-sponsored $850 million “station to nowhere”).

While Trump’s plan doesn’t even mention the word “climate,” communities are racing ahead with green projects: A major plan to renew Pittsburgh-area waterways is already underway, aligning with EPA water-quality standards and long-term goals for environmental and economic improvement. Similarly, 16 Midwestern cities were awarded seed grants by the Obama administration under the Great Lakes Restoration Initiative that would help support resiliency projects like storm-water management systems and constructed wetlands.

Another widely popular infrastructure initiative, municipal broadband, cries out for government funding, which would ensure that networks remain rooted in the public interest rather than tethered to market whims. But under Trump’s partnership scheme, inviting corporate funding will intrinsically defeat the public purpose behind the venture.

It’s likely that corporations and state legislatures won’t buy into Trump’s infrastructure plan because it is so skeletal. If anyone bites, the outcome will almost surely lead to failed, inequitable privatization projects. As dazzling white elephants and corporatized public services become the norm, many worthy public-serving projects will continue to mothball—remaining abandoned by both Washington and the market economy.