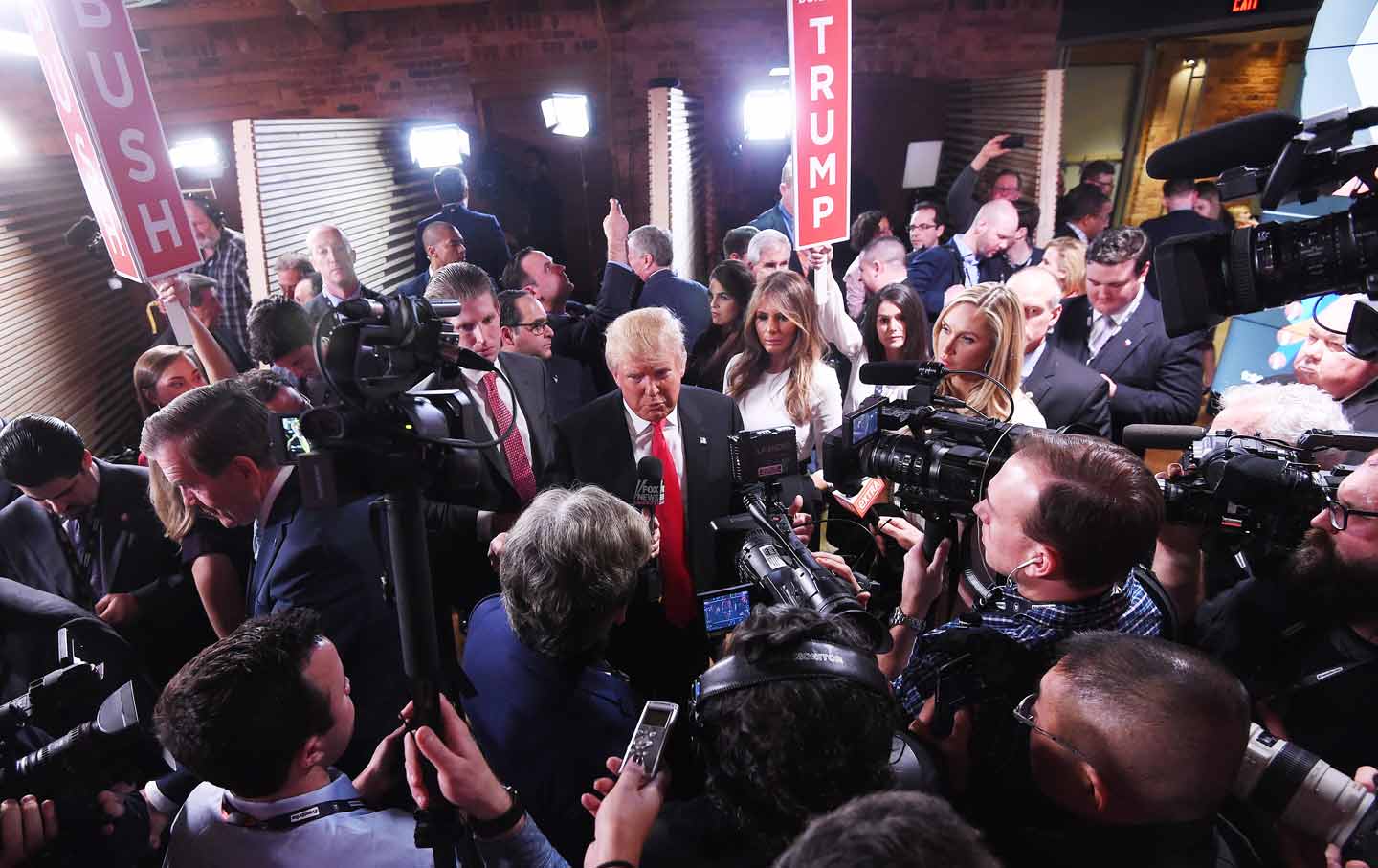 Now that it’s clear the Republican Party will nominate a delusional, dishonest, disinforming, ethnocentric, egomaniacal billionaire with virtually no understanding of foreign or domestic policy to be president of the United States, the obvious question is who to blame. One might naturally assume that the obvious answer would be the people and the party that chose him. Conservative politicians and many members of the punditocracy, however, have other ideas. Like Trump voters, they’ve somehow picked the people they happened to hate in the first place.

When Donald Trump first began to dominate the Republican debates last fall, right-wing politicians pushed the same “blame” button they have hit reflexively just about every day since January 2009. “Let’s be honest,” Bobby Jindal explained to readers of The Wall Street Journal, “there would be no Donald Trump, dominating the political scene today if it were not for President Obama.” Writing on the Journal’s editorial page, neocon Bret Stephens agreed. “Donald Trump is Barack Obama squared,” he insisted, calling both men “epic narcissists who see themselves as singularly suited to redeem an America that is not only imperfect but fundamentally broken.”

As the Trump phenomenon grew and other GOP candidates’ prospects dimmed, a more complex explanation was required. As with global warming, gun control, evolutionary theory, and birth control, Trumpism was discovered to be part of a global media conspiracy. “He’s being treated with kid gloves by many in the media, in the hopes that he’s the nominee,” whined media darling Marco Rubio. “The media knows Donald can’t win the general, that Hillary would wallop him,” added Ted Cruz.

In far-right circles, to blame the media is by definition to blame liberals. But interestingly, this notion has appeal on the far left as well. In an article posted on The Intercept last week titled “The Culture That Created Donald Trump Was Liberal, Not Conservative,” Jim Lewis complained that NBC, Time, Random House, Condé Nast, and Andy Warhol’s acolytes created Trump. Possibly aware that no sensible list of liberals would ever look like the one above, Lewis further explained that it was “those coastal cultural gatekeepers—presumably mostly liberal—who first elevated” Trump. The word “presumably” sure does a lot of work there—to say nothing of the fact that Trump’s celebrity and his political career are quite obviously two separate phenomena. (Nobody’s nominating Kim Kardashian to be president, after all.)

If talk of evil “coastal” elites inspires nostalgia for Andrew Sullivan, then you’re in luck. The writer who accused Gore voters in those areas of supporting treason after 9/11 is back, now in New York magazine, and he, too, has located the conspiracy at work to elect Trump (and thereby, he argues, to literally end the Republic). Like David Horowitz and Christopher Hitchens before him, Sullivan has managed to travel 180 degrees across the political spectrum while continuing to blame liberals for everything he doesn’t like. In this case, it takes him to the same place as the right-wing pundit S.E. Cupp (“Blame Liberals for the Rise of Trump”) and the conservative Naval War College political scientist Tom Nichols (“How the P.C. Police Propelled Donald Trump”), both of whom blame the tyranny of political correctness for Trump’s victory.

No doubt many conservatives in the media and those few who are in academia would like to believe that their ideas reflect the opinions of “real” people. Alas, real-world evidence doesn’t support this. According to extensive polling by Public Opinion Strategies, a Republican polling firm working for NBC and The Wall Street Journal, the strongest sources of Trump’s support lie largely among (white) people who earn little money and have little education. They tend to live in rural areas, far from media centers and academic environments: places that have been bypassed by the prosperity that characterizes so much of recently revitalized urban America. Unlike Bernie Sanders supporters, who look to rebuild an economic system that now penalizes wage work in favor of corporate profits and inherited wealth, Trump voters target scapegoats for their economic misfortune and existential dread. Using data from the American National Election Studies 2016 Pilot Study, undertaken this past January, Sean McElwee and Jason McDaniel have found that Trump supporters are far more likely than others to harbor “racial resentment” (as measured on a scale popularized by political scientists Donald Kinder and Lynn Sanders in 1996, and based on a series of answers relating to one’s feelings toward ethnic and religious minorities). They also turn out to be deeply resentful of the recent political and economic gains being made by female and LGBT individuals, as New York Times columnist Thomas Edsall has noted. In other words, some key characteristics of the average Trump voter are ignorance, poverty, bigotry, and a desire to turn back the clock on what most Americans consider to be social progress.

Both blame games—the pundits and politicians who attack liberals to explain the rise of Trump, as well as the Trump voters who believe that immigrants, Muslims, and anyone who can be defined as “other” are responsible for their misfortunes—share one key similarity: a purposeful blindness to reality. The pundits and politicians know quite well that the base of Trump’s support is not liberal. Indeed, it is antiliberal. (Even if one were to agree that political correctness was, in some significant fashion, an inspiration for Trumpism, it would be inaccurate to pin on liberals the desire to shut down differing points of view, as nothing could be more illiberal.) Most economically and educationally disadvantaged citizens are also likely aware that the people doing the gardening and housekeeping for sub-minimum wage are not the real reason their family’s future feels so bleak. Unfortunately, because establishment politicians refuse to admit the economic costs of globalization, and because conservative politicians and intellectuals are unwilling to stand up to the bigotry that has been thriving inside the movement in recent decades, those being left behind have heard no better explanations. Now throw in all the scaremongering related to Islamic terrorism—as opposed to, say, handgun violence—and you have a recipe for an easily manipulated mass movement that is simply unwilling to listen to reason. Trump voters want action—what kind  hardly matters, so long as there is someone to attack. Consistent with the long tradition of American know-nothingism, they don’t care who is genuinely responsible for their misfortune as long as they can find a target for their blind and unquenchable anger.