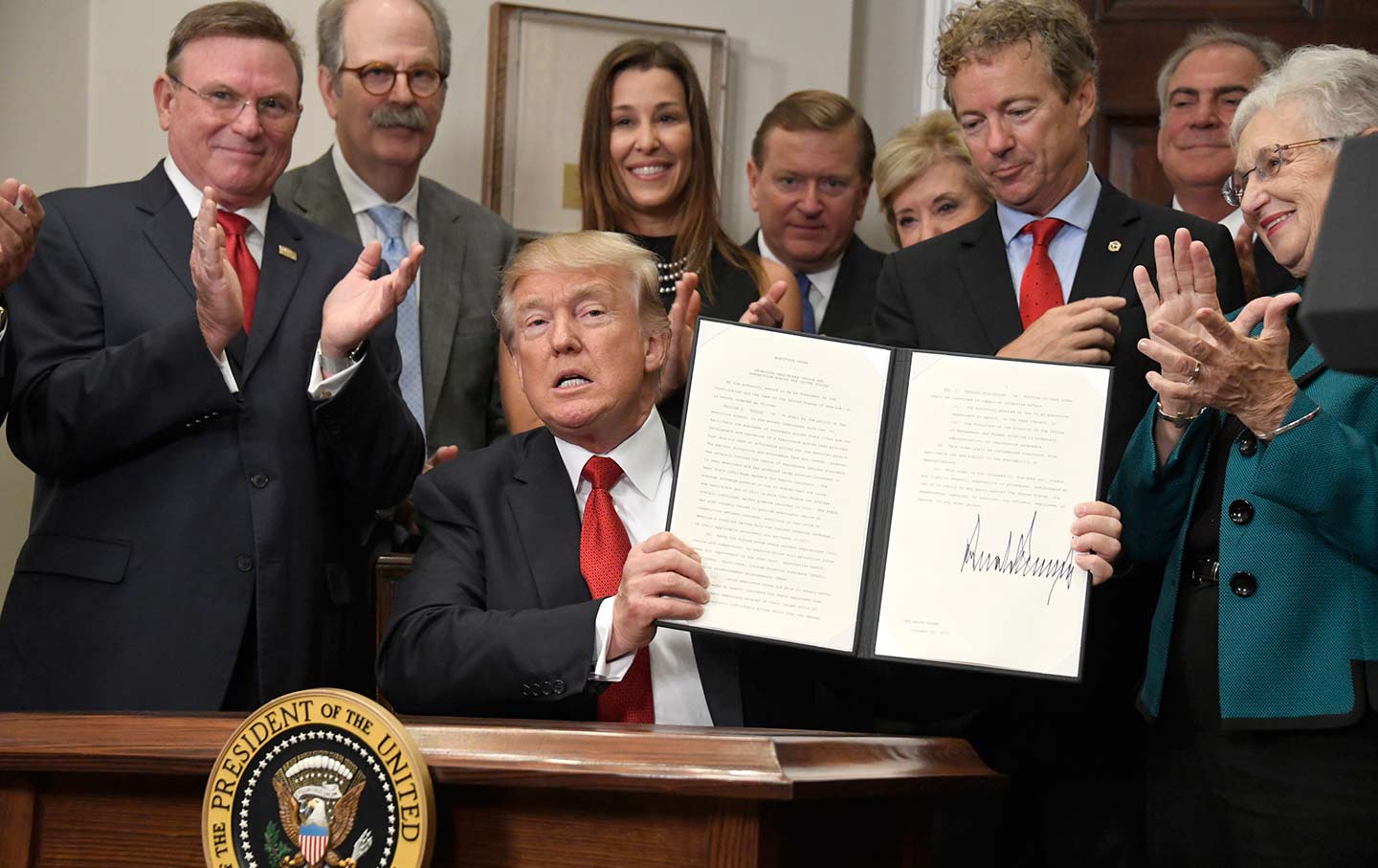 Donald Trump shows an executive order on health care he signed at the White House on October 12, 2017. (Ron Sachs / Pool via CNP)

When dealing with President Donald Trump, it is always important to separate what actually matters from what doesn’t. Yesterday, a high-profile executive order to undermine the individual-health-insurance-market framework of the Affordable Care Act was more of a statement of aspirations than an immediate threat. Meanwhile, Trump put into motion a much more direct, unilateral act of sabotage

First, let’s look at that executive order. We’ve become so dazzled by the Trump Show theory of politics, where every statement or tweet can move mountains, that we assume everything he does has world-historical importance. But, in general, Congress makes laws, not the president with one stroke of a pen. The executive order states that it’s the policy of the Trump administration to create a high-quality, affordable health-care system, which Republicans have been trying to come up with for seven years. But Trump has a few actual ideas.

He wants to expand “association health plans,” where small businesses band together to obtain better deals on health insurance, and short-term insurance, a catastrophic-style policy that people in job transition can currently access for up to three months. Both of these alternatives are not subject to many of the ACA’s minimum-benefit requirements.

Association health plans, under the Trump order, would be considered large employers, subject mostly to state regulations—and if the association included multiple states, it could pick which state’s laws to follow (i.e., the one with the least regulations). This would certainly create a race to the bottom, like we have in the credit-card industry, where association health plans that offer benefits from the most deregulated state fan out across the country.

Short-term insurance is not subject to ACA benefit-mandates at all. Trump wants to increase the duration of that insurance from three to 12 months and make it renewable, so that it becomes more of an everyday option than a stopgap. There’s also a nod to health-reimbursement arrangements, flexible-spending accounts employers can offer so people can use pretax dollars to pay medical expenses. Trump wants to open those up to anyone.

The expected effect would be for healthier people to jump out of ACA markets, making risk pools sicker. Insurers would react by accelerating cost increases in those plans, or possibly bugging out, crushing the insurance exchanges.

But the operative word is “wants.” What the executive order actually says is that cabinet officials “shall consider proposing regulations” on these options, “consistent with law.” It doesn’t even specify what should be done with those regulations, just that they should be expanded in some way. There’s not even a guarantee that individuals would be able to buy into the association health plans, which would be the most direct way to attack the exchanges.

Any proposed regulations would have to go through public comment and all the hoops of the Administrative Procedures Act—studies of the policy’s effect, Office of Management and Budget review, etc.—a process that takes months, if not years. Finally, Trump asks for the secretary of health and human services (a vacant position at the moment) to write twice-annual reports about what steps can be taken to make this a reality—maybe you can call this brainstorming.

So that’s not an immediate evisceration of the law. It creates a potential for mischief, but only if it gets through the thicket of administrative requirements and also the judiciary branch. There’s no question Democrats will sue to block changing the ACA by executive fiat. Health-care analyst Tim Jost is skeptical that the association-health-plan expansion would pass legal muster, for example. It’s also unclear whether these plans could actually sell insurance “across state lines,” Trump’s familiar talking point; networks would have to be rented in each state, and the associations may not be able logistically to pull it off.

This executive order will also make the choice of a health-and-human-services secretary to replace Tom Price a giant political football. There aren’t 50 votes in the Senate for radically transforming Obamacare, and there may not be 50 votes for a cabinet official who wants to do it without consultation from Congress.

But while wonks debated the import of the executive order, Politico leaked a far more consequential shot at the ACA. The Trump administration has apparently decided to end cost-sharing-reduction subsidies to insurers, which had been the subject of considerable uncertainty for months. These $7 billion annual payments, designed to help insurers reduce out-of-pocket costs for their lowest-income customers, is entirely within the administration’s capacity to nullify, at least at this point. Congress never formally funded the payments before the Obama administration started paying insurers, leading to a lawsuit between the two branches. (The Obama administration contended that Congress permanently enabled funding.)

Trump has threatened to cancel the subsidies for months; that very fact has caused insurance premiums to skyrocket because of the uncertainty. At some level this threat has been priced in, and may not even be a big deal for 2018. But getting rid of the subsidies would eventually cause problems. Insurers still have to reduce cost-sharing for low-income patients, and have said they’ll raise premiums as a result. Because most Obamacare-exchange consumers get federal subsidies that cap their portion of premiums, the major (but not entire) impact of this would be a spike in government spending. Either the insurer gets the money, or individuals do. However, if insurers find the markets too unbearable without cost-sharing payments, they could leave, which would certainly worsen things.

Even here, there are options. California Attorney General Xavier Becerra has already threatened to sue, and health insurers could join that lawsuit. Plus, Congress could appropriate the funds itself, which was the subject of the bipartisan “market stabilization” talks. That would make the lawsuit irrelevant and take the threat out of Trump’s hands.

Thursday’s moves are just part of Trump’s attempted sabotage of the Obamacare exchanges. He has massively reduced the length, advertising, and assistance for open enrollment, and plans to shut down healthcare.gov for large portions of practically every Sunday during that period. But it’s important to note that Trump’s going after a very narrow slice of the population. Medicare and Medicaid aren’t being targeted here, nor the Veterans Affairs system. Only the private market-reliant, Rube Goldberg system of covering people who don’t get insurance at work is on the chopping block. And the very fact that this market has very little competition and has seen premium spikes contributes to its vulnerability. People like Obamacare more now that it’s been under threat, but this danger for a market that’s hasn’t really worked as promised and is limping along won’t go away, until we get a more coherent health-care system that guarantees quality and affordable coverage for everyone.