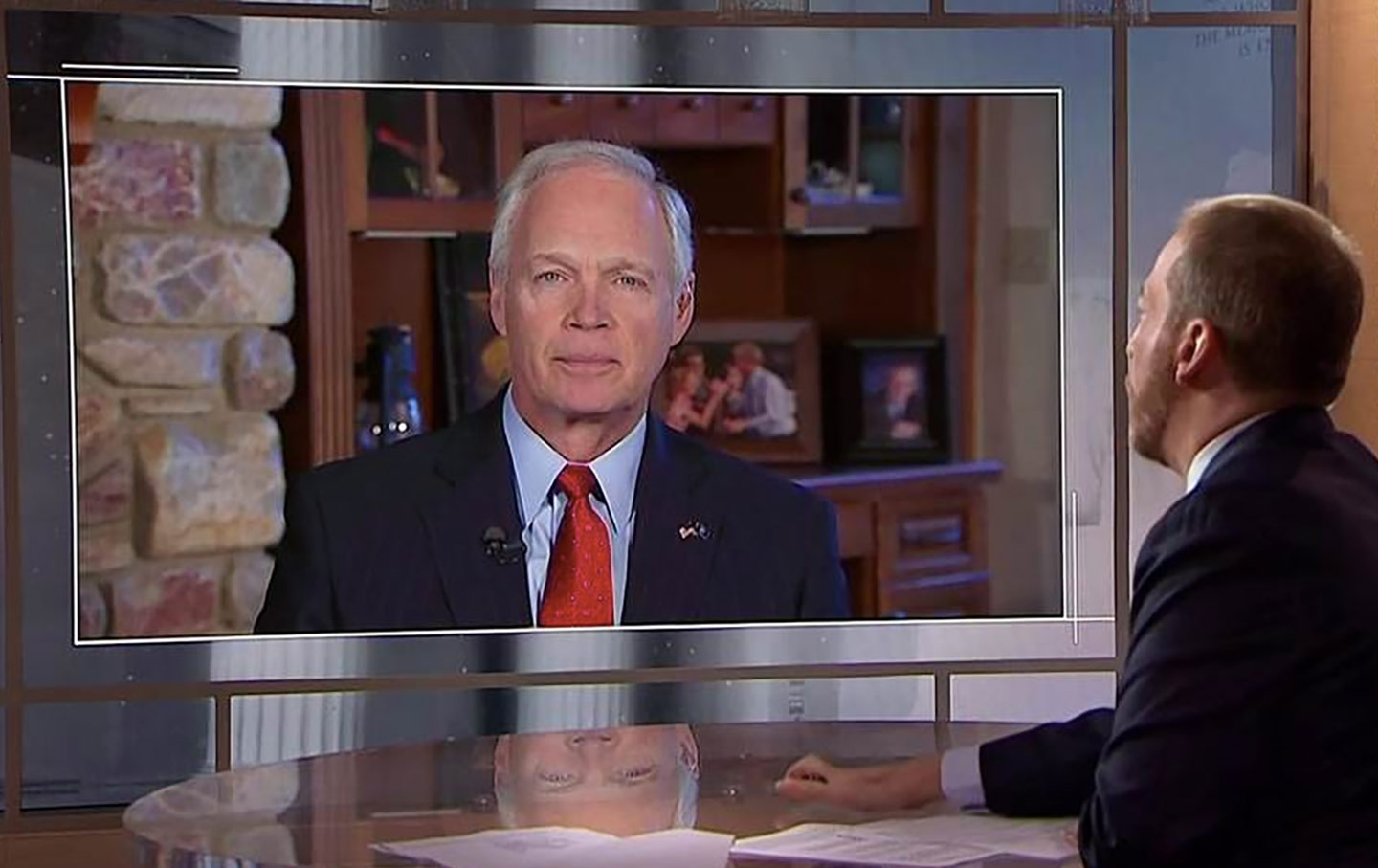 When Donald Trump is impeached—as now seems increasingly likely—the Senate will weigh whether to convict him and Wisconsin Senator Ron Johnson will serve as one of the jurors. That could put Johnson in the most awkward position of any member of the chamber’s Republican Caucus. In order to retain his status as the president’s most inept defender this side of House minority leader Kevin McCarthy, Johnson will have to downplay evidence of his own concerns regarding the actions that sparked the impeachment inquiry.

Since he melted down on NBC’s Meet the Press Sunday, everyone’s been talking about Johnson’s wild-eyed performance, in which he spouted so many conspiracy theories that host Chuck Todd interrupted him to say, “I have no idea why Fox News conspiracy propaganda stuff is popping up on here.”

Actually, there’s an explanation for Johnson’s meltdown. It has to do with a desperate senator’s determination to stay on the right side of his party’s president after a week in which revelations regarding Johnson’s concerns about the Ukraine imbroglio did the president no favors.

In August, a US diplomat told Johnson, the chairman of the Senate Committee on Homeland Security and Governmental Affairs, that the Trump administration was blocking $400 million in military aid to Ukraine as part of a scheme to pressure Ukrainian President Volodymyr Zelensky to launch the political investigations that the US president was demanding.

“At that suggestion, I winced,” Johnson told The Wall Street Journal. “My reaction was: Oh, God. I don’t want to see those two things combined.” After he was done wincing, Johnson called Trump.

“He said, ‘Expletive deleted—No way. I would never do that. Who told you that?’” Johnson told the Journal Friday. Johnson, arguably the most credulous member of the Senate, was apparently trying to help the president by recounting their conversation. However, as the Journal report on the August 31 phone call noted, “Mr. Johnson’s account, coupled with text messages among State Department officials released Thursday, show some Trump administration officials—including [US ambassador to the European Union Gordon Sondland] and a top U.S. diplomat in Kyiv—believed there was a link between Mr. Trump’s July decision to hold up the aid to Ukraine and his interest in Kyiv’s launching new probes.”

Back in Wisconsin, Johnson explained that he was “surprised by the president’s reaction and realized we had a sales job to do.” By “we,” the senator meant the advocates for aiding Ukraine. But Trump wasn’t buying. “I tried to convince him to give me the authority to tell President Zelensky that we were going to provide that [aid]. Now, I didn’t succeed.” As the Milwaukee Journal Sentinel noted in its report on Johnson’s comments, “Johnson made clear that he was aware of allegations Trump was withholding aid to Ukraine for political reasons weeks before the public knew of the accusation.”

Johnson failed to speak up. But, less than a month after the senator spoke with Trump, a whistle-blower came forward with evidence that the president had, indeed, pressured Zelensky to investigate former vice president Joe Biden, a leading Democratic challenger to Trump’s 2020 reelection bid. Then, in a move that shocked even his defenders, Trump released detailed notes from a July phone conversation that confirmed the whistle-blower’s report. With each passing day, the evidence of wrongdoing has mounted against the president.

The president now faces an impeachment inquiry, and responsible Republicans are acknowledging that things don’t look good for Trump. “By all appearances, the President’s brazen and unprecedented appeal to China and to Ukraine to investigate Joe Biden is wrong and appalling,” says Utah Senator Mitt Romney, who explained (after Trump upped the ante with a call for a Chinese investigation of Biden) that “it strains credulity to suggest that it is anything other than politically motivated.”

The group Republicans for the Rule of Law announced that “Trump may have suspected Joe Biden of corruption, but when the president pressured a foreign government to investigate an American citizen and political rival, he engaged in actual corruption. Whatever Biden did or didn’t do can’t excuse that.” Michigan Representative Justin Amash, who was elected as a conservative Republican but now sits as an independent, endorsed the impeachment inquiry and said of Trump, “He’s openly challenging our system of checks and balances. In plain sight, he’s using the powers of his public office for personal gain and counting on Republicans in Congress to look the other way.”

So what does Ron Johnson have to say now?

He spent last week making excuses for the man who any reasonable person would conclude had lied to him. Johnson called Trump the nation’s “chief law enforcement officer” and told a Wisconsin radio station, “We have proper agreements with countries to investigate potential crimes so I don’t think there’s anything improper about doing that.”

When asked about his involvement in another key issue related to the scandal, Johnson became very conveniently forgetful.

Trump alleges that Biden, as the vice president, abused his position to try to get Ukrainian Prosecutor General Viktor Shokin fired as part of an effort to shut down an investigation of a gas company with which Biden’s son Hunter was associated. But The New Yorker reminds us that this is “a repeatedly discredited conspiracy theory.” The reality is that Shokin faced allegations of corruption that troubled a lot of Americans—Republicans and Democrats—and that there was bipartisan support for his removal.

This is where Ron Johnson back comes into the story—as something of a character witness for Biden. In 2016, Johnson joined a bipartisan group of senators in signing a letter urging “urgent reforms to the Prosecutor General’s office and Judiciary.” So the Wisconsin senator knew the real story. Yet when he was asked about the letter last week, Johnson told a reporter, “I send out all kinds of oversight letters.… I don’t know which 2016 oversight letter you’re referring to so I will look at that and then we’ll issue a press release, statement, or something—but I don’t engage in hypocrisy. I’m looking at getting the truth.”

Johnson is engaging in hypocrisy, but it’s worse than that.

As NBC’s Chuck Todd said Sunday, after trying to get the senator to answer some basic questions: “Senator Johnson, please! Can we please answer the question that I asked you, instead of trying to make Donald Trump feel better here that you’re not criticizing him?”

Johnson has a long history of trying to keep on the right side of Trump. He proposed that they team up in 2016 and run as “the Ronald and the Donald.” And Johnson doesn’t want to get on the wrong side of a president who goes ballistic when Republicans like Romney cross him. Johnson really is trying to help. He’s just really bad at it. So bad that every time Ron Johnson opens his mouth, he makes the case against Donald Trump.