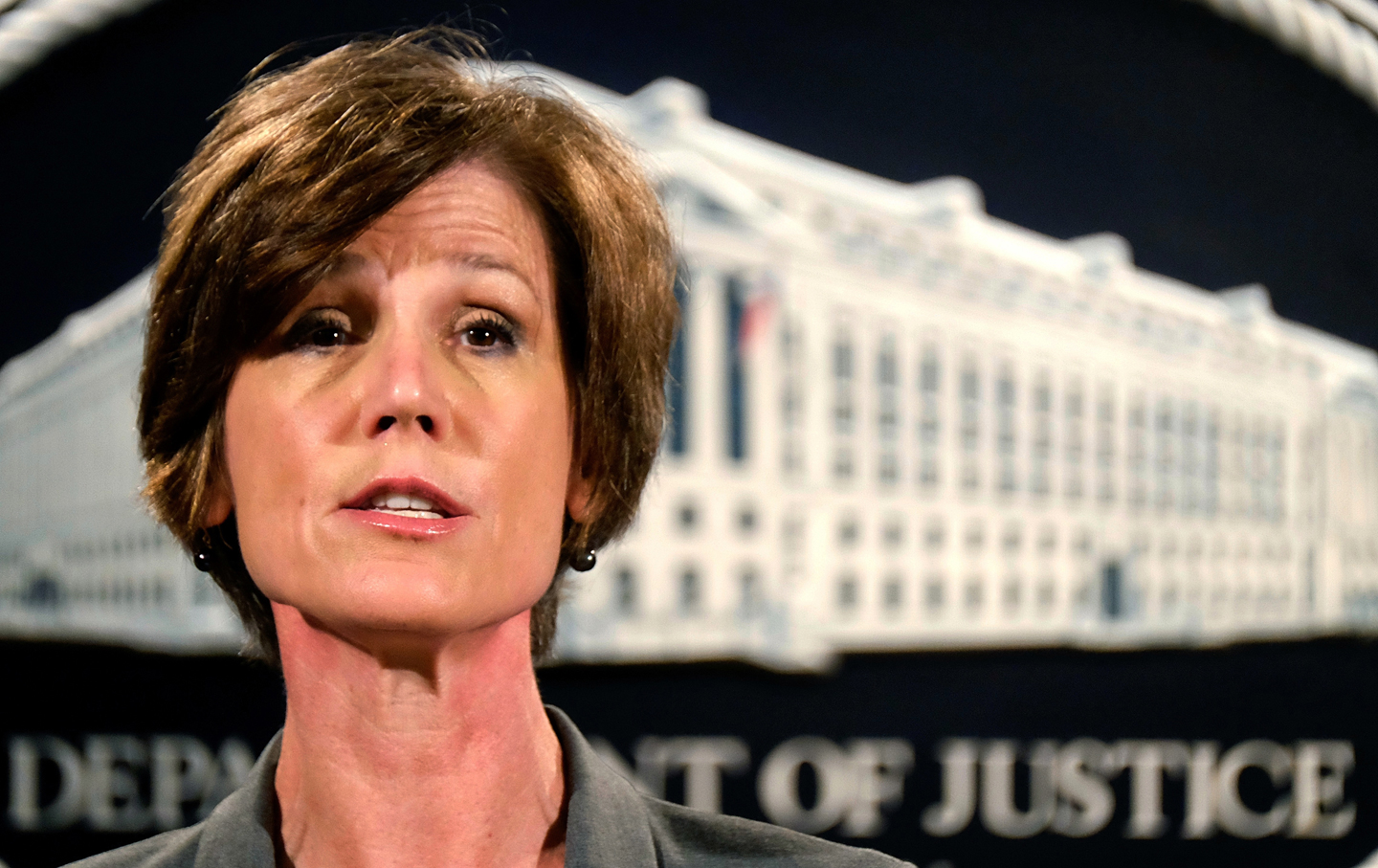 Richard Nixon was a miserable excuse for a president who appears credible only by comparison with several of his more miserable successors. But, as bad as Nixon was, it took the former president the better part of five years to get into a fight with the Department of Justice and fire a top lawyer for following the rule of law rather than the dictates of an out-of-control and unconscionable White House.

On the evening of October 20, 1973, a scandal-plagued Nixon was determined to fire independent special prosecutor Archibald Cox, who was investigating presidential wrongdoing as part of a broader inquiry into issues raised by the Watergate scandal. Attorney General Elliot Richardson and Deputy Attorney General William Ruckelshaus resigned rather than to follow Nixon’s orders. Finally, Robert Bork took over as acting attorney general and did the deed. The chaotic developments of that evening came to be known as the “Saturday Night Massacre.”

Trump acted on a weeknight. But he stirred parallel talk of a political massacre. The president’s firing of Acting Attorney General Sally Yates for ordering Justice Department lawyers to stop defending his “Muslim ban” executive order was instantly described as the “Monday Night Massacre.”

"The way the Trump presidency is beginning it is safe to say it will end in calamity." -- John Dean

Harvard law professor Laurence Tribe was among the first to make the connection, tweeting that Trump’s Justice Department crackdown “reminds me, of course, of Nixon’s Saturday night massacre.” David Gergen, the veteran White House aide who has served in Republican and Democratic administrations, said on CNN, “This brings back so many echoes of the Saturday Night Massacre.”

Gergen and others noted distinctions between different presidents and different motivations for targeting the Department of Justice. Their point was well-taken. But there was no question that Trump’s actions inspired a sense of instability and chaos rarely felt in the United States since the dark days of Nixon’s presidency. Former White House counsel John Dean, the man who stood up to Nixon, tweeted as the events of Monday night evolved: “The way the Trump presidency is beginning it is safe to say it will end in calamity. It is almost a certainty. Even Republicans know this!”

Dean hailed Yates for standing up to Trump, as did Congressman Elijah Cummings, the ranking Democrat on the House Oversight Committee.

“In all my years as a member of Congress, which now is 21, I’ve met so many very principled people who truly believe in the Constitution and doing what is right,” explained Cummings. “There comes a time when people, no matter who may be their boss, they stand upon their principles, so at the end of the day they can look them selves in the mirror and say ‘I synchronized my conduct with my conscience.’ And Yates is such a person.”

Yates acted after a weekend of wrestling with the legal issues raised by Trump’s issuance on Friday of his ill-conceived executive order restricting immigration and travel by refugees from predominantly Muslim countries. Four federal judges had issued orders blocking parts of Trump’s order, but legal battles continued to rage over the matter. Ultimately, the acting attorney general (who at her own 2015 confirmation hearing told Alabama Senator Jeff Sessions: “I believe the Attorney General or the Deputy Attorney General has an obligation to follow the law and the Constitution”) ordered Justice Department lawyers to stop defending what is now broadly referred to as a “Muslim ban.”

My responsibility is to ensure that the position of the Department of Justice is not only legally defensible, but is informed by our best view of what the law is after consideration of all the facts. In addition, I am responsible for ensuring that the positions we take in court remain consistent with this institution’s solemn obligation to always seek justice and stand for what is right. At present, I am not convinced that the defense of the Executive Order is consistent with these responsibilities nor am I convinced that the Executive Order is lawful.

Consequently, for as long as I am the Acting Attorney General, the Department of Justice will not present arguments in defense of the Executive Order, unless and until I become convinced that it is appropriate to do so.

Yates had to have expected that she would be dismissed by a president who does not take kindly to official resistance—especially when it upsets his political calculations. But she may have been surprised by the speed with which Trump moved.

The president’s response, barely three hours after the Yates letter became public, was to fire the acting attorney general with a stinging statement from the White House. It read:

Ms. Yates is an Obama Administration appointee who is weak on borders and very weak on illegal immigration.

It is time to get serious about protecting our country. Calling for tougher vetting for individuals travelling from seven dangerous places is not extreme. It is reasonable and necessary to protect our country.

Tonight, President Trump relieved Ms. Yates of her duties and subsequently named Dana Boente, US Attorney for the Eastern District of Virginia, to serve as acting attorney general until Senator Jeff Sessions is finally confirmed by the Senate, where he is being wrongly held up by Democrat senators for strictly political reasons.

Before the night was done, Boente had rescinded Yates’s move and ordered Justice Department lawyers to “defend the lawful orders of our President.”

Boente’s role will be temporary. Trump has nominated Sessions for attorney general, and that nomination is advancing in a Republican-controlled Senate.

Sessions, who has faced overwhelming opposition from civil-rights groups and civil libertarians, will face new questions—similar to those he once asked Yates—about whether he intends to serve the rule of law or simply do the bidding of a president with whom he has so clearly aligned himself. Foes of the Sessions nomination are still hopeful that a handful of Republican senators might join Democrats in determining that those questions are so consequential that the senator’s nomination cannot go forward. But, so far, there have been few Republican acts of conscience in debates over Trump nominees.

No matter what happens with Sessions, however, the turmoil will continue.

There are still pundits and politicians who resist the use of such stark language. It is a troublesome acknowledgement that many are not yet prepared to make.

But Trump’s “Monday Night Massacre” highlights concerns expressed by the ACLU. And the administration’s response to federal-court rulings that blocked parts of Trump’s scheme—a combative and confusing declaration that “Saturday’s ruling does not undercut the President’s executive order.… The order remains in place…”—confirmed the legitimacy of those concerns.

There is a strong argument to be made that, when Donald Trump assumed the presidency, we entered a #ConstitutionalCrisis moment. And it is unlikely that this moment will pass any more quickly than did the crisis period that extended from Richard Nixon’s lawlessness.

As John Dean argued late on Monday night: “Donald Trump is in the process of trashing the American presidency. He is just getting started. He thinks he is bigger than the office.”