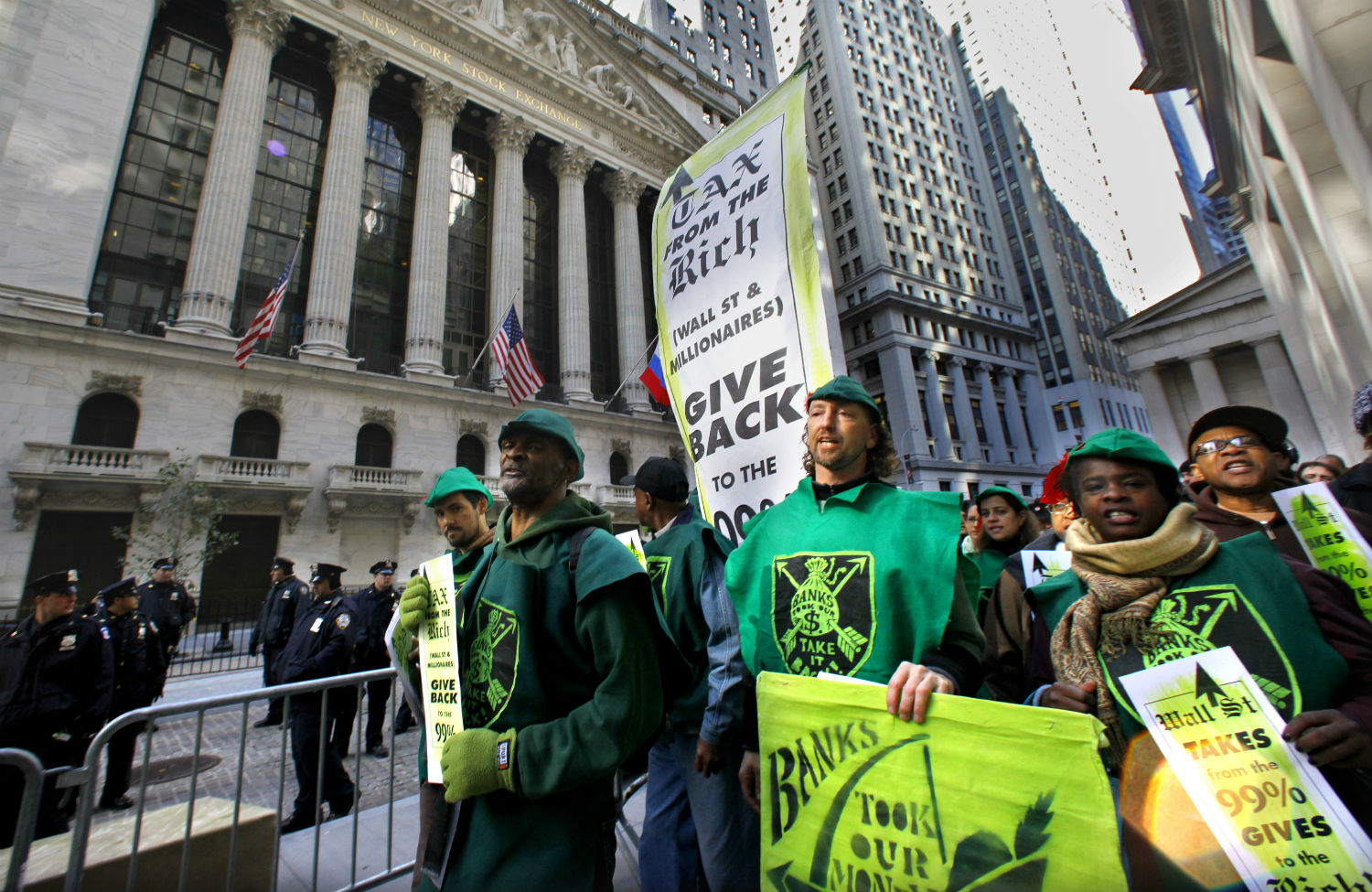 A Robin Hood Tax was among the demands of Occupy Wall Street Protesters in 2011. (AP Photo/Bebeto Matthews)

Americans who are serious about addressing income inequality have long recognized that the United States needs a Robin Hood Tax—a charge on financial transactions proposed by campaigners who have argued since the Wall Street meltdown of 2008 that “banks, hedge funds and the rest of the financial sector should pay their fair share to clear up the mess they helped create.”

National Nurses United and other unions, along with Congressional Progressive Caucus leaders such as Congressman Keith Ellison, D-Minnesota, have for a number of years said that the United States should follow the lead of European countries that have developed financial-transactions taxes. Explaining his proposal for an Inclusive Prosperity Act as an alternative to the destructive austerity agenda of Republicans and some centrist Democrats, Ellison said in 2013:

A lot of people in Washington like to talk about reducing the debt and deficits. Well if you really care about reducing the deficit, how about asking Wall Street speculators to pay their fair share? This bill will add a tax of a fraction of a percent on transactions made by the same Wall Street firms and stock traders who crashed our economy in 2008. This tax alone will generate up to $300 billion a year in revenue, stabilizing the deficit and allowing us to invest in the things that matter—education, roads and bridges, and health care for our seniors and veterans.

Unfortunately, that logic tended to be dismissed not just by top Republicans but by top Democrats.

With backing from House minority leader Nancy Pelosi, D-California, Maryland Congressman Chris Van Hollen moved Monday to present an “action plan” that is designed to frame the Democratic message in the new Congress. At the heart of it is a proposal to address the rapid redistribution of wealth upward in the United States with a small tax on high-volume stock trades and a new initiative to aid working-class individuals and families.

“This is a plan to help tackle the challenge of our times,” declared Van Hollen, a key figure in the House Democratic Caucus and a particularly influential voice in debates on economic policy. “We want a growing economy that works for all Americans, not just the wealthy few.”

The “action plan” calls for a 0.1 percent tax on transactions by high-volume traders—Wall Street’s “high rollers”—that would yield an anticipated $800 billion in fresh revenues over a decade. Reductions in tax breaks for the wealthiest Americans would yield another $400 billion. The combined $1.2 billion windfall would, according to a Washington Post review of the plan, help to fund “a ‘paycheck bonus’ of $1,000 for individuals and $2,000 for married couples, a bonus of $250 for people who save at least $500 a year and reduced ‘marriage penalties’ for couples.”

Of course, any proposal for taxing the wealthiest Americans faces daunting odds in a Congress now wholly controlled by Wall Street–aligned Republicans such as Senate majority leader Mitch McConnell, R-Kentucky, House Speaker John Boehner, R-Ohio, and House Ways and Means Committee chair Paul Ryan, R-Wisconsin. Ryan can, in particular, be counted on to use his powerful new position to defend the financial interests that have so generously supported his campaigns.

Yet the decision of the top Democrats in Congress to embrace even a small Robin Hood Tax opens up the debate and provides space for a more serious discussion of income inequality and how to address it.

That discussion needs to include not just Democrats who have recently focused on the issue but also the unions such as NNU and the Amalgamated Transit Union, that have significant experience advocating for new approaches to taxation, along with activist groups such as Health GAP and National People’s Action and top economists such as Jeffrey Sachs and Robert Pollin.

The economists provide the context. “With the financial transaction tax we can raise the revenue we need and discourage excessive speculation on Wall Street,” explains Pollin. “It’s being done in the world’s second largest financial market, London and the fastest growing security markets in the world, including China, Hong Kong, Singapore and Russia. If they can do it, so can we.”

The activists provide the arguments. “We have a revenue crisis, and we know where the money is, it’s on,” says National People’s Action executive director George Goehl. “We’re going to ask the politicians are you going to stand with Wall Street or Main Street?”

That asking of politicians is not finished. It is just beginning. While progressive Democrats such as Ellison are on board for a bold approach to financial-transactions taxes, most congressional Democrats are only beginning to explore the prospect. They are taking a tentative step, and that is good. But real progress—in debates with Republicans and in the broader effort to change politics and policies—will only be made if top Democrats come to understand that, in order to address income inequality, America should develop a robust Robin Hood Tax.

In this case, it’s an especially good idea to listen to the prescriptions being recommended by the longest and strongest advocates for taxing financial transactions in order to free up resources for human needs.

“Nurses see the fallout of the wretched economic policy in the U.S. and globally and see people who have run out of solutions,” says NNU executive director RoseAnn DeMoro, who a number of years ago helped to develop the US campaign for a financial transactions tax. Frustrated with the narrow range of debate about how to find the resources to pay for healthcare, housing, education and so much more, DeMoro and the NNU began educating, organizing and rallying for a Robin Hood Tax.

The embrace of the concept by top Democrats such as Van Hollen is evidence of how far that campaigning has come. But DeMoro is right when she speaks of the need to accelerate and expand the campaign. “[The] financial transaction tax is seen by all of our allies internationally as a way of addressing the economy of the world,” DeMoro has noted. “And that’s why it’s not the financial transaction tax in and of itself, it’s the reconceptualization of what we should be as a society of people.”