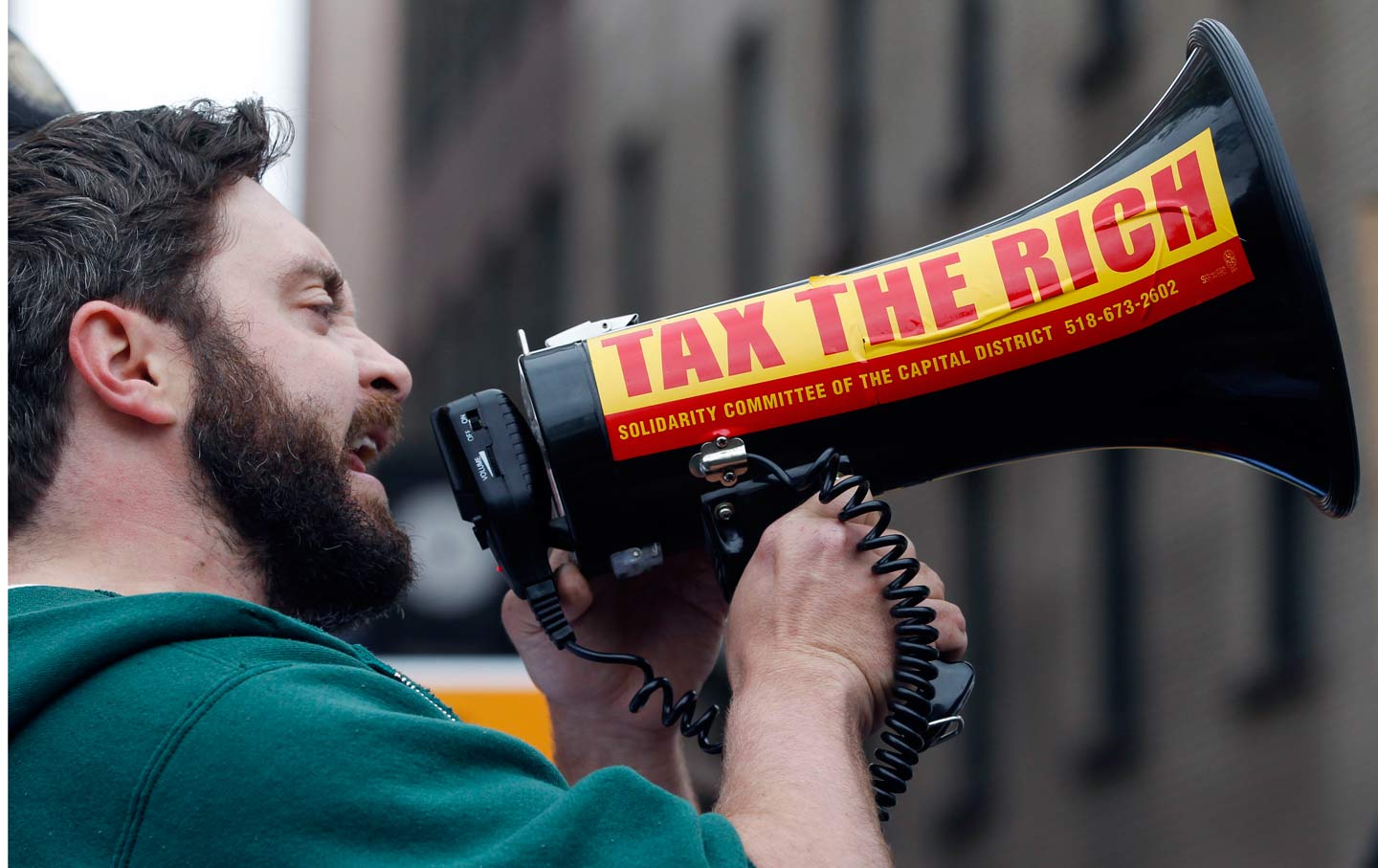 As you groan about the size of the check you cut to Uncle Sam today, just imagine the savings the country’s biggest corporate citizens are wracking up during their year-round tax holiday. Corporations collectively owe, both to the US Treasury, and to poorer governments around the world, about $100 billion in unpaid debts they’ve socked away through tax offshoring.

According to Oxfam’s latest brief on tax offshoring, to close the $100 billion gap in the public coffers, “the average American taxpayer would have to shell out an extra $760” in taxes. Thanks to a sophisticated tax arbitrage tactic, “In 2012, US multinationals alone shifted $700 billion from countries where their profits were truly earned to locations with very low or zero tax rates.”

If that $100 billion showed up on the government’s books, we could fund essential healthcare for more than 2 billion people worldwide, “quadruple spending on education in the world’s 47 poorest countries,” or basically finance the annual budgets for federal social security, labor and unemployment, and education program spending in the United States.

The amount robbed from the Treasury can also be assessed not in terms of what isn’t paid for but what the companies managed to cough up versus what they got to stow safely in offshore coffers.

According to Oxfam, during 2008 through 2014, while the economy reeled and then hobbled forward, “the 50 largest US companies collectively received $27 in federal loans, loan guarantees and bailouts for every $1 they paid in federal taxes.” It’s not that they were exactly ungenerous to Washington; they were just savvy in terms of where they deposited their assets. The same companies collectively sank $2.6 billion into lobbying federal officials, and got a return on investment of “nearly $11.2 trillion in federal loans, loan guarantees and bailouts.” Overall, 45 of the 50 companies scored major tax discounts, whittling down the statutory 35 percent corporate rate to just 27 percent, Oxfam reports. Since all this happened while state and local budgets were gutted so communities could supposedly “live within their means,” it’s no wonder people are outraged that companies have funneled away billions that might otherwise help repair the damage of the financial crisis.

Corporations have perfected elaborate accounting schemes to maximize loopholes, such as “inversion”—recently thwarted by the Obama administration in an attempted Pfizer merger—in which triangulation between different tax authorities enables mega-multinationals like Apple and General Electric to restructure their internal accounting and siphon revenues toward lower-tax jurisdictions, while the rest of the company’s operations remain essentially unchanged. Another shell game known as “earnings stripping” involves recycling revenues through internal loans, which enables “the parent company to essentially pay artificially high interest rates to itself” without actually producing anything.

David Cay Johnston noted in The American Prospect that “Apple and General Electric owe at least $36 billion in taxes on profits being held tax-free offshore, Microsoft nearly $27 billion, and Pfizer $24 billion.” Separately, such multinational brands also help fuel job offshoring, contributing to a hemorrhaging of the country’s human and fiscal capital through both financial manipulation and the “real” economy of labor.

For a rich, industrialized country like the United States, tax dodging can be seen as a driver of inequality and symbol of corporate impunity. But globally, Oxfam’s report reminds us that the material effects of such corruption are deeper for poorer nations, as “public revenues in developing countries are more dependent on the taxation of large businesses.” The governments of poorer countries are disproportionately dependent on taxation of large businesses and thus inherently less resilient in coping with the loss of funds through offshoring, as well as more tethered to the volatility of global markets and vulnerable to political domination by foreign corporate hegemons.

While poor countries face pressures over neoliberal “development,” tax offshoring hampers their struggle to reach self-sufficiency, Oxfam reports, because “Every dollar a developing country can raise in taxes is a dollar it does not need to seek from donors.” Since the Global South is often host to hyper-exploitative extractive industries, like corruption-rich Nigerian oil mining regions, dependency on predatory multinational investors warps both fiscal and trade systems.

“We clearly have evidence of tax dodging by big multinational corps writ large,” says Robert Silverman, senior advisor to Oxfam America, “and on the opposite side we clearly see the impact when government revenue falls short…in the US we see it with episodes like [the water crisis in] Flint and in our crumbling infrastructure, nationally.” Yet in tracing the chain of accountability, the lack of comprehensive disclosure remains the weakest link.

In the absence of any comprehensive worldwide tax enforcement authority, Oxfam calls for an international reporting and oversight system that can get ahead of the conventional “whack a mole” phenomenon, in which regulators chase multinationals from tax haven to tax haven. The G-20 has recently proposed to coordinate with the OECD on reforms to harmonize tax policies across jurisdictions thick with wealth-hoarding vehicles from Manhattan high-rises to Panamanian trusts. But Oxfam argues that a truly universal tax fairness protocol should be based on standards of human rights and public transparency.

“In a lot of realms, either when it comes to big macro issues like trade or individual corporation efforts like corporate social responsibility [programs]…somehow taxes almost seem extraneous to that,” Silverman says, pointing out that global financial bodies are already embedded in shady tax games; as Oxfam’s research reveals, the World Bank has helped fund many recent African development programs that are linked to multinationals that exploit tax shelters. But if financial institutions are serious about restoring ethics in transnational financing, “tax should be looked at as a part of core business,” Silverman adds, incorporated into an “agenda to basically figure out, Are the actors that we’re doing business with doing right on tax?”

Some might shrug at the Panama Papers because they expose “legal” transactions, just business as usual. But the increasingly blurred lines between “avoidance” and “evasion” are precisely what’s criminal about the whole financial infrastructure, which is why, ultimately, mobsters are in the same business as software moguls. Both illicit enterprises and the world’s corporate titans are underwritten by global capital’s social deficit—between the democracy we’re owed and the politicians money can buy.